Be it known that I, NIKOLA TESLA, a citizen of the United States, residing at New York, in the county and State of New York, have invented certain new and useful Improvements in Electrical Transformers, of which the following is a specification, reference being had to the drawings accompanying and forming a part of the same.

The present application is based upon an apparatus which I have devised and employed for the purpose of developing electrical currents of high potential, which transformers or induction-coils constructed on the principles heretofore followed in the manufacture of such instruments are wholly incapable of producing or practically utilizing, at least without serious liability of the destruction of the apparatus itself and danger to persons approaching or handling it.

The improvement involves a novel form of transformer or induction-coil and a system for the transmission of electrical energy by means of the same in which the energy of the source is raised to a much higher potential for transmission over the line than has ever been practically employed heretofore, and the apparatus is constructed with reference to the production of such a potential and so as to be not only free from the danger of injury from the destruction of insulation, but safe to handle. To this end I construct an induction-coil or transformer in which the primary and secondary coils are wound or arranged in such manner that the convolutions of the conductor of the latter will be farther removed from the primary as the liability of injury from the effects of potential increases, the terminal or point of highest potential being the most remote, and so that between adjacent convolutions there shall be the least possible difference of potential.

The type of coil in which the last-named features are present is the flat spiral, and this form I generally employ, winding the primary on the outside of the secondary and taking off the current from the latter at the center or inner end of the spiral. I may depart from or vary this form, however, in the particulars hereinafter specified.

In constructing my improved transformers I employ a length of secondary which is approximately one-quarter of the wave length of the electrical disturbance in the circuit including the secondary coil, based on the velocity of propagation of electrical disturbances through such circuit, or, in general, of such length that the potential at the terminal of the secondary which is the more remote from the primary shall be at its maximum. In using these coils I connect one end of the secondary, or that in proximity to the primary, to earth, and in order to more effectually provide against injury to persons or to the apparatus I also connect it with the primary.

In the accompanying drawings, Figure 1 is a diagram illustrating the plan of winding and connection which I employ in constructing my improved coils and the manner of using them for the transmission of energy over long distances. Fig. 2 is a side elevation, and Fig. 3 a side elevation and part section, of modified forms of induction-coil made in accordance with my invention.

A designates a core, which may be magnetic when so desired.

B is the secondary coil, wound upon said core in generally spiral form.

When two coils are used in a transmission system in which the currents are raised to a high potential and then reconverted to a lower potential, the receiving-transformer will be constructed and connected in the same manner as the first—that is to say, the inner or center end of what corresponds to the secondary of the first will be connected to line and the other end to earth and to the local circuit or that which corresponds to the primary of the first. In such case also the line-wire should be supported in such manner as to avoid loss by the current jumping from line to objects in its vicinity and in contact with earth—as, for example, by means of long insulators, mounted, preferably, on metal poles, so that in case of leakage from the line it will pass harmlessly to earth. In Fig. 1, where such a system is illustrated, a dynamo G is conveniently represented as supplying the primary of the sending or “step-up” transformer, and lamps H and motors K are shown as connected with the corresponding circuit of the receiving or “stepdown” transformer.

Instead of winding the coils in the form of a flat spiral the secondary may be wound on a support in the shape of a frustum of a cone and the primary wound around its base, as shown in Fig. 2.

In practice for apparatus designed for ordinary usage the coil is preferably constructed on the plan illustrated in Fig. 3. In this figure L L are spools of insulating material upon which the secondary is wound—in the present case, however, in two sections, so as to constitute really two secondaries. The primary C is a spirally-wound flat strip surrounding both secondaries B.

The inner terminals of the secondaries are led out through tubes of insulating material M, while the other or outside terminals are connected with the primary.

The length of the secondary coil B or of each secondary coil when two are used, as in Fig. 3, is, as before stated, approximately one-quarter of the wave length of the electrical disturbance in the secondary circuit, based on the velocity of propagation of the electrical disturbance through the coil itself and the circuit with which it is designed to be used—that is to say, if the rate at which a current traverses the circuit, including the coil, be one hundred and eighty-five thousand miles per second, then a frequency of nine hundred and twenty-five per second would maintain nine hundred and twenty-five stationary waves in a circuit one hundred and eighty-five thousand miles long, and each wave length would be two hundred miles in length. For such a frequency I should use a secondary fifty miles in length, so that at one terminal the potential would be zero and at the other maximum.

Coils of the character herein described have several important advantages. As the potential increases with the number of turns the difference of potential between adjacent turns is comparatively small, and hence a very high potential, impracticable with ordinary coils, may be successfully maintained.

As the secondary is electrically connected with the primary the latter will be at substantially the same potential as the adjacent portions of the secondary, so that there will be no tendency for sparks to jump from one to the other and destroy the insulation. Moreover, as both primary and secondary are grounded and the line-terminal of the coil carried and protected to a point remote from the apparatus the danger of a discharge through the body of a person handling or approaching the apparatus is reduced to a minimum.

I am aware that an induction-coil in the form of a flat spiral is not in itself new, and this I do not claim; but

1. A transformer for developing or converting currents of high potential, comprising a primary and secondary coil, one terminal of the secondary being electrically connected with the primary, and with the earth when the transformer is in use, as set forth.

2. A transformer for developing or converting currents of high potential, comprising a primary and secondary wound in the form of a flat spiral, the end of the secondary adjacent to the primary being electrically connected therewith and with earth when the transformer is in use, as set forth.

3. A transformer for developing or converting currents of high potential comprising a primary and secondary wound in the form of a spiral, the secondary being inside of, and surrounded by, the convolutions of the primary and having its adjacent terminal electrically connected therewith and with earth when the transformer is in use, as set forth.

4. In a system for the conversion and transmission of electrical energy, the combination of two transformers, one for raising, the other for lowering, the potential of the currents, the said transformers having one terminal of the longer or fine-wire coils connected to line, and the other terminals adjacent to the shorter coils electrically connected therewith and to earth, as set forth. 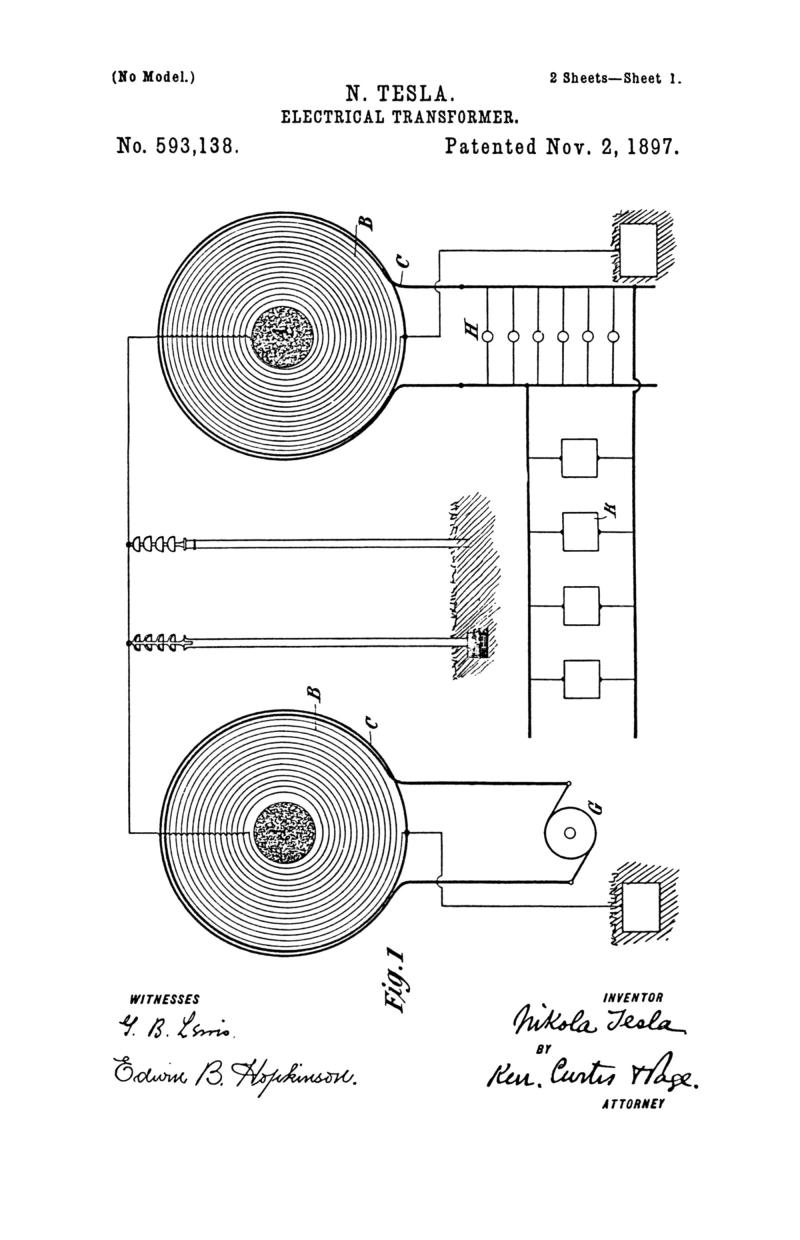 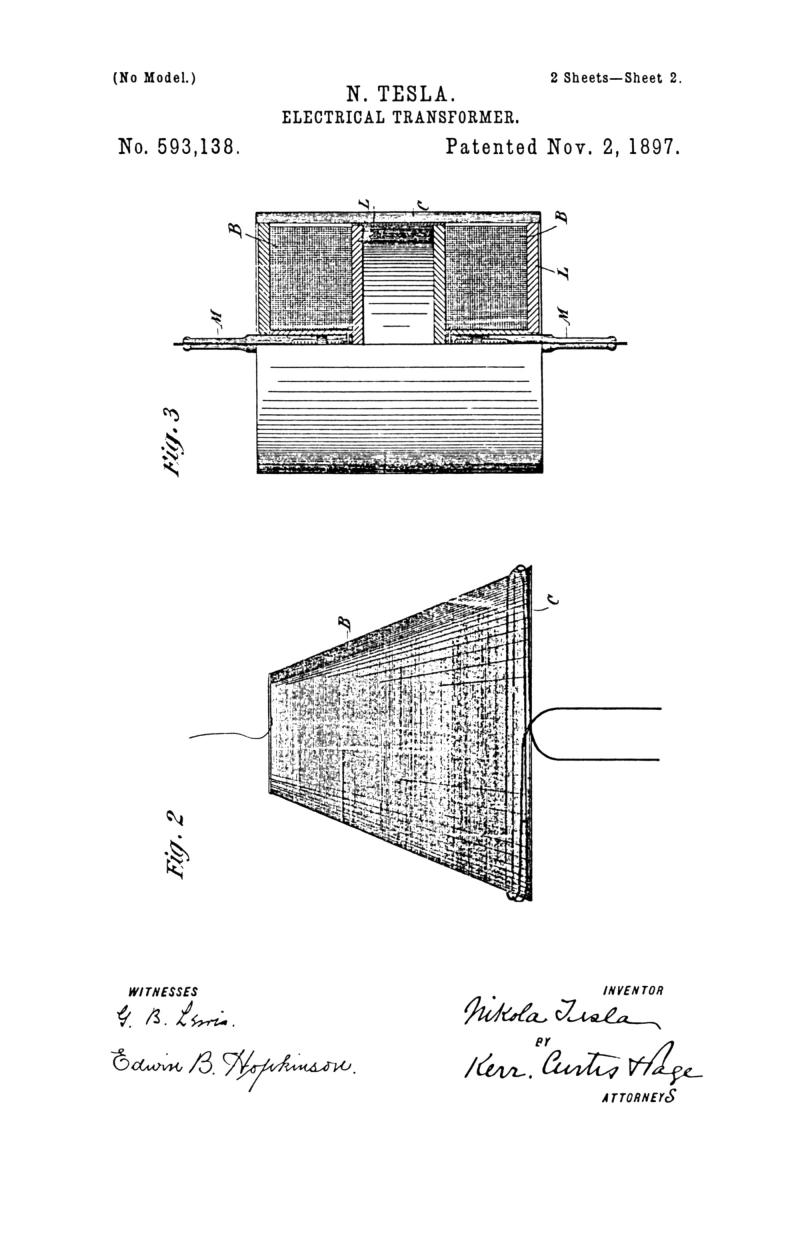