Be it known that I, NIKOLA TESLA, a citizen of the United States, residing at New York, in the county and State of New York, have invented certain new and useful Improvements in Electrical Igniters for Gas-Engines and Analogous Purposes, of which the following is a specification, reference being had to the drawings accompanying and forming a part of the same.

In certain kinds of apparatus it is necessary for the operation of the machine itself or for effecting the object for which it is used to produce an electric spark or any other similar local effect at a given instant of time or at predetermined intervals. For example, in certain gas or explosive engines a flame or spark is necessary for the ignition of an explosive mixture of air and gas under the piston, and the most effective way of igniting the gaseous mixture has been found to be the production in the cylinder at the proper moments of an electric spark. The only practicable device by which this has been accomplished heretofore is an induction-coil comprising a primary and secondary circuit with a buzzer or rapidly-acting automatic circuit-breaker in the primary and a circuit-controller, such as a switch or commutator, located also in the primary or battery circuit and operated by some moving portion of the apparatus to temporarily close such circuit at the proper time, and thereby set in operation the automatic circuit-breaker, which causes between secondary terminals in the cylinder the discharge which is necessary for the proper ignition of the explosive mixture. Instead of thus temporarily closing the primary circuit the automatic circuit-breaker might be permitted to operate continuously, and the secondary, circuit normally broken, might be closed at the proper time to cause the spark to pass at any point. In either case the employment of a quick-acting circuit-breaker is necessary, for unless the induction-coil be of large size and the source of current of considerable power a slow or gradual make and break of the primary of a simple transformer, such as would ordinarily be effected by a switch or commutator, would not effect a discharge of the character necessary for the proper ignition of the gas.

There is, however, no form of vibrating or quick-acting circuit-breaker of which I am aware that can be depended upon to operate with certainty to produce such a spark or which will continue to operate for any length of time without deterioration, and hence not only in the case of engines of the kind described, but in other forms of apparatus which involve the use of a high-tension induction-coil with a quick-acting circuit-breaker, the operation of the machine is contingent upon the proper operation of a comparatively insignificant but essential part.

The object of my invention is to provide a more certain and satisfactory means for use with and control by such machines or apparatus as I have mentioned for producing sparks or discharges of the desired character, and to this end I employ the following arrangement: Any suitable moving portion of the apparatus is caused to mechanically control the charging of a condenser and its discharge through a circuit in inductive relation to a secondary circuit leading to the terminals between which the discharge is to occur, so that at the desired intervals the condenser may be discharged through its circuit and induce in the other circuit a current of high potential which produces the desired spark or discharge.

One practical means of accomplishing this is to employ any proper form of switch or commutator operated directly or through suitable intermediate devices by a moving part of the apparatus and which is caused to complete an electric circuit which has been previously broken or interrupted for an appreciable time when the occurrence of the spark or discharge is necessary. The circuit thus closed includes a condenser, which by this operation of the switch is permitted to discharge, through the primary of a transformer, energy which it had previously received during the interruption of said circuit from a battery or discharge of a self-induction coil in series with the battery in the charging-circuit.

The ends of the secondary circuit of the transformer above mentioned are connected with the points or terminals in the machine between which the spark is to pass, and following the short-circuiting of the condenser by the closing of the switch a strong secondary discharge induced by the discharge of the condenser through the primary will occur. It is possible by this means not only to produce a strong discharge of high tension, as in the form of a spark well adapted for the ignition of gas or other purposes for which sparks are employed, but to secure such result by apparatus very much less complicated and expensive than heretofore employed for the purpose and which will be capable of certain and effective operation for an indefinite period of time.

I have illustrated the principle of my improvement and the manner in which the same is or may be carried out in the drawing hereto annexed. The invention is shown as used for effecting the operation of the piston of a gas-engine, the figure being a diagram.

A designates the cylinder of a gas-engine, B the piston, and C the piston-rod. Other parts of the engine are omitted from the illustration as unnecessary to an understanding of the invention.

On the piston-rod C is a commutator or circuit-controller upon which bear the terminals a b of an electric circuit D. This commutator comprises a continuous ring c and a split ring d side by side, so that when the terminals are on the latter the circuit is interrupted, but when on the former it is closed. The to-and-fro movement of the piston, therefore, operates to alternately make and break the circuit, the position of the commutator being such that the make occurs at the moment desired for the ignition of the explosive charge under the piston.

The primary F is combined with a secondary K, the conductors from which lead, respectively, to an insulated terminal L within the cylinder A and to any other conducting body in the vicinity of such point as the cylinder itself. In consequence of this arrangement, when the piston reaches the proper point the circuit D is closed, the energy of the condenser is discharged through the primary with a sudden rush, and a strong and effective spark or flash is produced between the point L and the cylinder or piston which ignites the charge of explosive gas.

It will be understood from the preceding description that I do not limit myself to the specific construction or arrangement of the devices employed in carrying out my improvement and that these may be varied within wide limits.

1. In an apparatus which depends for its operation or effect upon the production of a sudden electric discharge at a given instant, or at predetermined intervals of time, the combination with a moving part of said apparatus of a switch or commutator, a condenser, a charging-circuit for the same, a primary circuit through which the condenser discharges, and a secondary circuit in inductive relation to the said primary circuit and connected with the terminals at the point in the apparatus where the discharge is required, the switch or commutator being operated by the said moving part to effect the discharge of the condenser at the proper intervals, as set forth.

2. In an apparatus which depends for its operation or effect upon the production of a sudden electric discharge at a given instant, or at predetermined intervals of time, the combination with a moving part of said apparatus of a circuit and a circuit-controller adapted to close said circuit at the time when the occurrence of said discharge is desired, a source of current in said circuit, a condenser adapted to be charged by said source while the circuit is interrupted, and a transformer through the primary of which the condenser discharges when the circuit is closed, the secondary of the transformer being connected with the terminals at the point in the apparatus where the discharge is required, as set forth.

3. In an apparatus which depends for its operation or effect upon the production of an electric discharge, at a given instant, or at predetermined intervals of time, the combination with a moving part of said apparatus of a circuit and a circuit-controller adapted to close said circuit at the time when the occurrence of the spark is desired, a source of current in said circuit, a self-induction coil which stores the energy of the source while the circuit is closed, a condenser into which said coil discharges when the circuit is broken, and a transformer through the primary of which the condenser discharges, the secondary of said transformer being connected with separated terminals at the point where the discharge is required.

4. In a gas or explosive engine of the kind described, the combination with a moving part of said engine of a circuit-closer or switch controlling the charging and discharging of a condenser, separated terminals in the cylinder or explosive-chamber, and a transformer through the primary of which the condenser discharges, the secondary being connected with the terminals in the cylinder, as set forth. 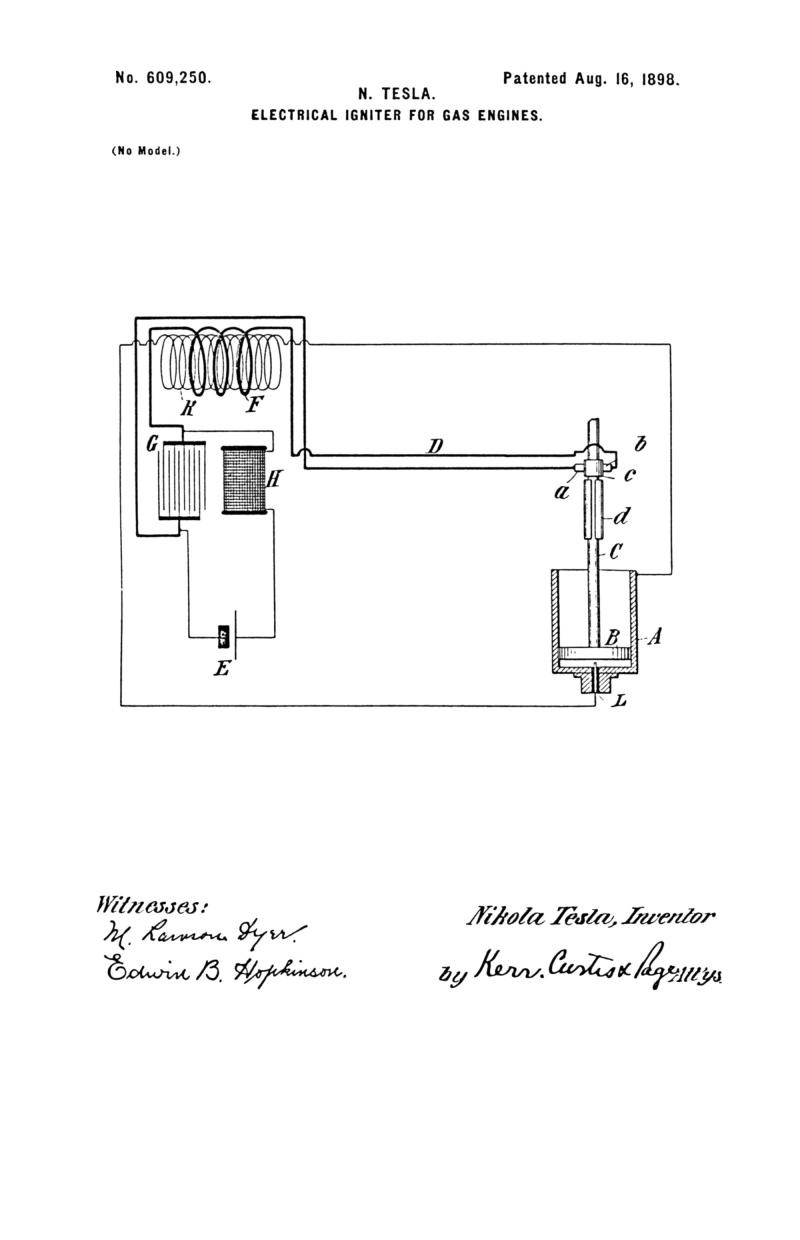