Be it known that I, NIKOLA TESLA, of the borough of Manhattan, in the city, county, and State of New York, have invented certain new and useful Improvements in Electrical-Circuit Controllers, of which the following is a specification, reference being had to the drawing accompanying and forming a part of the same.

The present application is based upon improvements in electrical-circuit controllers of the kind heretofore invented by me and described in previous applications, notably in an application filed December 2, 1897, Serial No. 660,518. The chief distinguishing features of these devices are the use of a conducting fluid for one or both of the terminals under conditions which permit of a very rapid succession of makes and breaks and a construction or arrangement which allows the enclosing of the terminals in an air-tight receptacle in which an inert medium may be maintained. My efforts to meet the practical requirements of apparatus of this kind have led me to adopt expedients and to invent mechanisms entirely novel in such devices. For example, in order to effect a rapidly-intermittent contact between two terminals by the use of a jet or jets in a closed receptacle it is obviously necessary to employ special means which will operate to hold one part of the apparatus stationary while the other rotates or to rotate both the essential parts or terminals in opposite directions or, as the case may be, in the same direction at different speeds.

The present invention is embodied in a device for securing the proper relative movement of the two parts or terminals of the circuit-controller and involves two salient features of novelty, one that it provides for maintaining in a rotating receptacle a stationary jet or jets which by impinging on a rigid conductor maintain the latter in rotation, thereby securing the requisite rapidly-intermittent contact between the two, and the other that it utilizes the rotation of such rigid conductor as a means for opposing or preventing the movement of its own supports in the direction of rotation of the receptacle, thereby securing, among other things, an approximately constant relative movement between the parts, a feature which in devices of this kind is often very desirable.

In the drawing hereto annexed I have illustrated the preferred form of apparatus which I have devised for carrying out these improvements. The figure is a central vertical cross-section of a circuit-controller.

A designates a receptacle, usually of iron or steel and mounted in any suitable manner, as by trunnions B B, having bearings in standards C C, so as to be capable of rapid rotation about a horizontal axis.

In the particular form of device under consideration the receptacle is divided into two parts insulated by a washer D and held together by insulated bolts E with nuts F. These two parts are electrically connected, respectively, with the two terminals of the apparatus, as hereinafter described, and by means of brushes X Y, bearing at any suitable points on the two parts of the receptacle, the circuit-controller is connected with the wires of a circuit.

Any convenient means may be employed to rotate the receptacle; but a simple way to effect this is to surround the same with a field-magnet G and to make the receptacle itself the armature of an electric motor or else to secure to it armature-cores, as H.

A body I is supported by trunnions J, having bearings in the ends of the receptacle and concentric with the axis of rotation of the same. The weight of the body I being eccentric to this axis tends to oppose its turning about the axis when the receptacle is rotated.

Upon the body or support I, but insulated therefrom, is secured a vertical standard K, in which there is a freely-rotatable spindle L, carrying a disk M, with radial arms inclined to the plane of the disk, so as to form vanes N. Arms O P are also secured to the body I and are formed with or carry at their ends ducts or tubes Q, with one end directed toward and opening upon the vanes N and the other end close to the inner wall of the receptacle and opening in the direction opposite to that of the rotation of the receptacle.

A suitable quantity of mercury R is placed in the receptacle before the latter is sealed or closed.

The operation of the device is as follows: The receptacle is started in rotation, and as it acquires a high velocity the mercury or other conducting fluid R is caused by centrifugal action to distribute itself in a layer over the inner peripheral surface of the receptacle. As the tubes or ducts Q do not take part in the rotation of the fluid, being held at the start by the weighted body I, they take up the mercury as soon as it is carried to the points where the ducts open and discharge it upon the vanes of the disk M. By this means the disk is set in rapid rotation, establishing the contact between the two sides of the receptacle which constitute the two terminals of the circuit-controller whenever the two streams or jets of fluid are simultaneously in contact with the vanes, but breaking the contact whenever the jets discharge through the spaces between the vanes. The chief object of employing more than one insulated jet is to secure a higher velocity of approach and separation, and in respect to the number of jets thus employed the device may be obviously modified as desired without departure from the invention. The disk M, having acquired a very rapid rotation, operates to prevent by gyrostatic action any tendency of the body I to rotate or oscillate, as such movement would change the plane of rotation of the disk. The movement of the parts, therefore, and the operation of the device as a whole are very steady and uniform, and a material practical advantage is thereby secured. The speed of the disk will be chiefly dependent on the velocity of the streams and pitch of the blades, and it is of course necessary in order to produce a constant speed of rotation of the disk that the velocity of the streams be constant. This is accomplished by rotating the receptacle with a constant speed; but when this is impracticable and the uniformity of motion of the disk very desirable I resort to special means to secure this result, as by providing overflowing-reservoirs V V, as indicated by dotted lines, from which the fluid issues upon the vanes with constant velocity, though the speed of the receptacle may vary between wide limits.

It may be stated that the jets can be produced in any other known ways and that they may be utilized in any desired manner to produce rotation of the disk.

1. The combination in a circuit-controller with a closed rotary receptacle, of a rigid conductor mounted within the same and through which the circuit is intermittently established, and means for directing a jet or stream of a fluid which is contained in the receptacle, against the said body so as to effect its rotation independent of the receptacle, as set forth.

2. In an electric-circuit controller, the combination of a closed rotary receptacle, a conducting body therein adapted to be rotated independently of the receptacle by the impingement thereon of a jet or stream of conducting fluid, and means for maintaining such a jet and directing it upon the said conductor, as set forth.

4. In a circuit-controller, the combination with a rotary receptacle of a support for a conductor mounted thereon concentrically with the receptacle and a gyrostatic disk carried by the support and adapted, when rotating, to oppose its movement in the direction of rotation of the receptacle, as set forth.

5. In a circuit-controller, the combination with rotary receptacle containing a conducting fluid, a support mounted within the receptacle, means for opposing or preventing its movement in the direction of rotation of the receptacle, one or more tubes or ducts carried thereby and adapted to take up the fluid from the rotating receptacle and discharge the same in jets or streams, and a conductor mounted on the support and adapted to be rotated by the impingement thereon of said jet or jets, as set forth.

7. The combination with a rotary receptacle of one or more tubes or ducts, a holder or support therefore mounted on bearings within the receptacle, which permit of a free relative rotation of said receptacle and holder, a disk with a bearing on the said holder and having its plane of rotation at an angle to that of the receptacle, the disk being formed or provided with conducting-vanes, upon which a jet of conducting fluid, taken up by the tube or duct from the receptacle when in rotation, is directed. 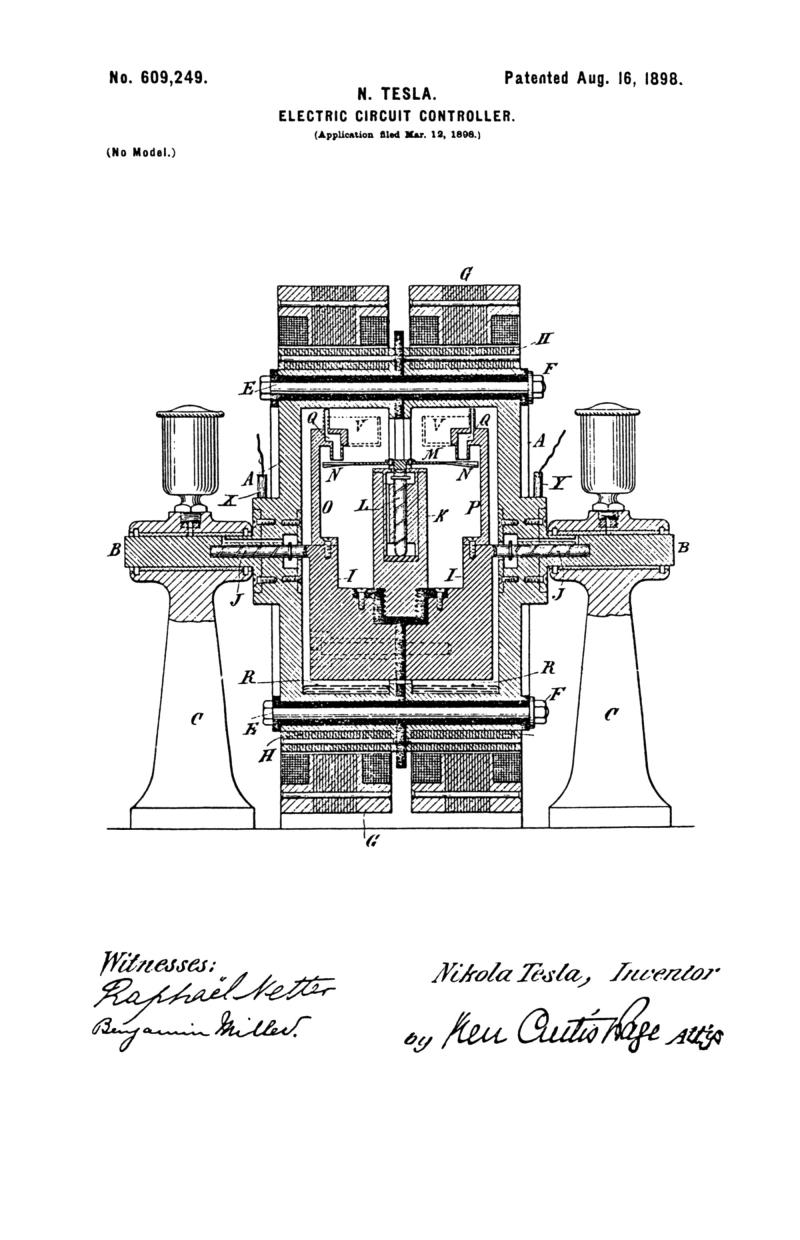