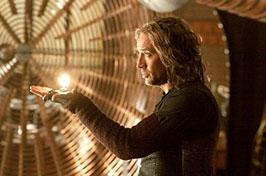 If you've seen any of the previews for Disney's forthcoming “The Sorcerer's Apprentice” film, you may have noticed many Tesla coil props including a replica of the large pancake coil featured in one of the most famous photos of Tesla. It seems that both the writers and producers of the film are Tesla fans, but what's most impressive is the level of interest Nicolas Cage, the star of the film, has in Tesla and his history. In a recent interview promoting the new film, Nicolas Cage had the following comments about Tesla:

“...coincidentally, I found out that the day he died is the same day I was born, and so with that in mind, I went to stay in Nikola Tesla's room at the New Yorker Hotel, to try to just see if I could call up the spirits, figuratively speaking, and see what came to me. And then I was in the room, and nothing really happened, but something hit the window, and I think it might have been a pigeon, and I read a little bit about Tesla, and I found out those were his friends, he loved pigeons. And he really cared about them, he would take care of them, that was it. That was it for him, his pigeons and his science. So I thought, okay, that's the gift. I'm going to try to find a way to put a pigeon in the movie, I'm going to fix his leg, and it's for you, Nikola Tesla.”

Nicolas Cage also noted that the filming of the movie completed on Tesla'a birthday.

The film opens July 16th and the previews are impressive.