First off, a thank you is due to those members who remembered to include their membership number when renewing their subscription. I have over 700 names on the roster and it is both time consuming and frustrating to have to search for your particular account. If you are not sure of your TCBA number, check the mailing label on the TCBA NEWS envelope.

Secondly, I owe an apology to those who answered my call for information about the February, 1981 issue of RADIO ELECTRONICS. The reason for the apology is that I do own an original copy of that issue. Evidently, I did not have it filed correctly. Anyway, this is to let you know that I do appreciate the many contributions you members have been sending in.

Work on the Tesla Coil Bibliography is continuing even though there has been somewhat of a downward trend in progress.

I am hoping that a publication date can be made in the not-too-distant future. Of course, a project of this nature can never be completed. It is impossible to spend the time and finances required for a research of this type such as traveling to large libraries, hotel expenses, etc.

Consequently, I wi11 have to rely on what information is already on file as well as what incoming material you good people will contribute.

Is TCBA for Sale?

TCBA receives many phone calls. Some are inquiries regarding membership and/or about materials we offer. Others are from people who wish to discuss the various parameters (theory, function, construction) of Tesla coils. And there are those who just like to chit-chat about topics associated with TCBA.

It is always nice to hear from people who I have not met but who wish to share the time with me. In many cases, I would like to reciprocate. Unfortunately, it would cost me a fortune to return the many calls that come in here. Please be assured that I really enjoy hearing from you.

But there is one particular phone call received that I must share with you. The caller informed me that a rumor was circulating that TCBA was up for sale! Happily, the rumor is untrue. The time may come when TCBA ownership may change hands. But for now, your friendly editor intends to remain at the helm.

This issue is dedicated to the memory of Lee De Forest. His is a name that needs no introduction to anyone familiar with the development of wireless telegraphy. De Forest was the one responsible for the development of the three-element electronic tube which gave a remarkable boost to radio communications. He also was responsible for many other developments such as sound-on-film techniques and the advancement of television.

But De Forest should be noted for one other fact - he idolized Nikola Tesla. When De Forest was a student at Yale, he wrote to Tesla asking to be taken in as an assistant. Unfortunately, Tesla was uninterested in taking on any new assistants. Think of what may have come out of the Tesla Electric Co. had he hired young De Forest?

Like most inventors, De Forest spent many years in the courts haggling over priority of invention. One of his adversaries was Edwin H. Armstrong.

It was identical to the essay carried in TCBA NEWS except that the MSOE printer reversed the “l” and “s” in Tesla's name which became Telsa. This is a very common error not only with those to whom the name Tesla is new. Even some of our memberships are (unintentionally) guilty. I once ordered 500 decals for TCBA and the company did the same thing.

Anyway, congratulations are due Gary for having his well-written essay reprinted.

The coil featured in Gary's article was not the only Tesla coil built at the school. The October, 1928 issue of SCIENCE AND INVENTION featured an article on a similar coil. TCBA will carry this article in a future issue of the NEWS.

The bonus feature for Volume 5 is a bumper sticker. I've double checked each envelope to make sure yours has been included. Even so, goofs are bound to happen. If you have been shortchanged, please let me know. Extra stickers are available for $1.

We also have plenty of decals for window display as well as a small supply of emblem patches. These are also $1 each.

Include an additional $.25 per order (not per item) if you want them shipped separately from the NEWS. 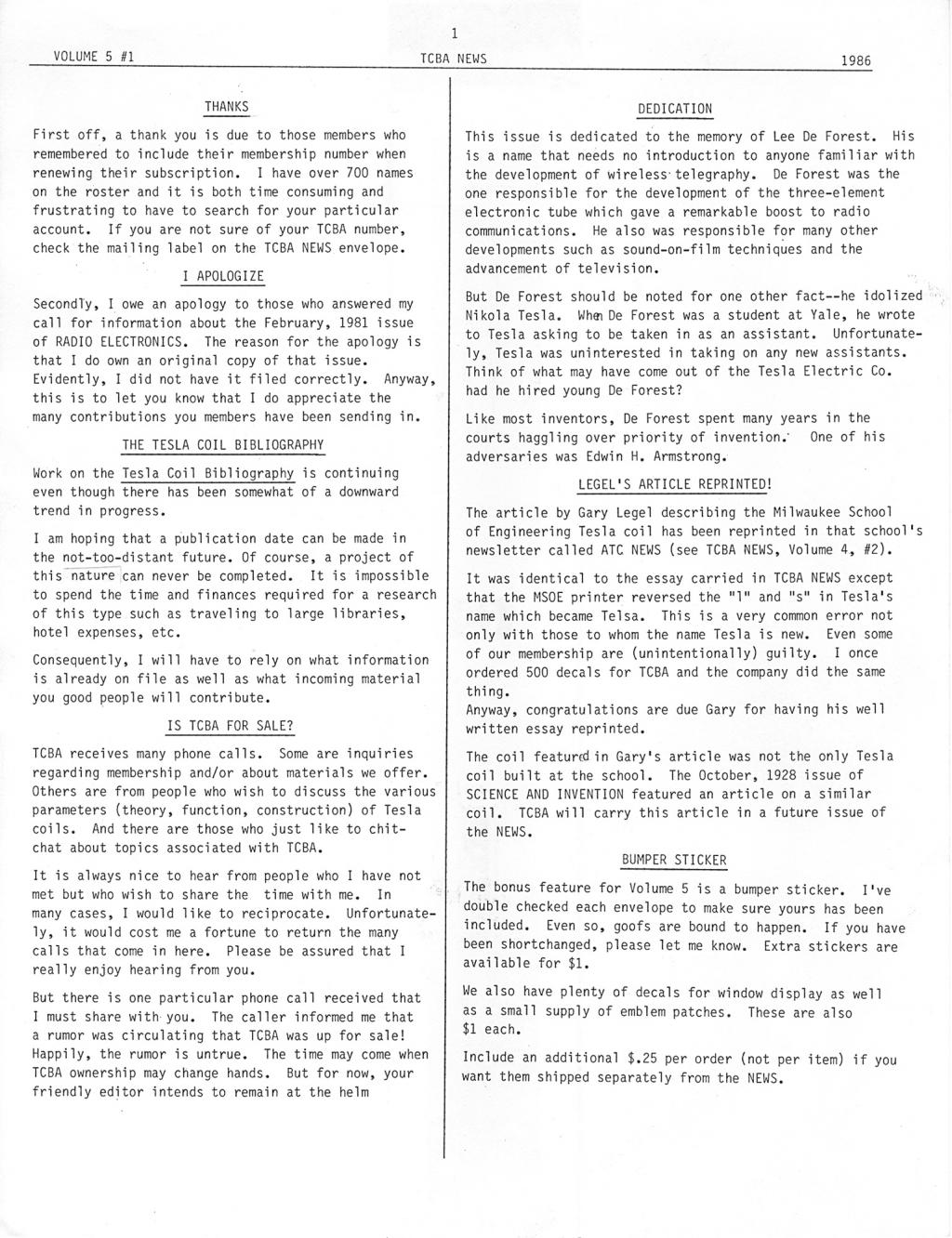