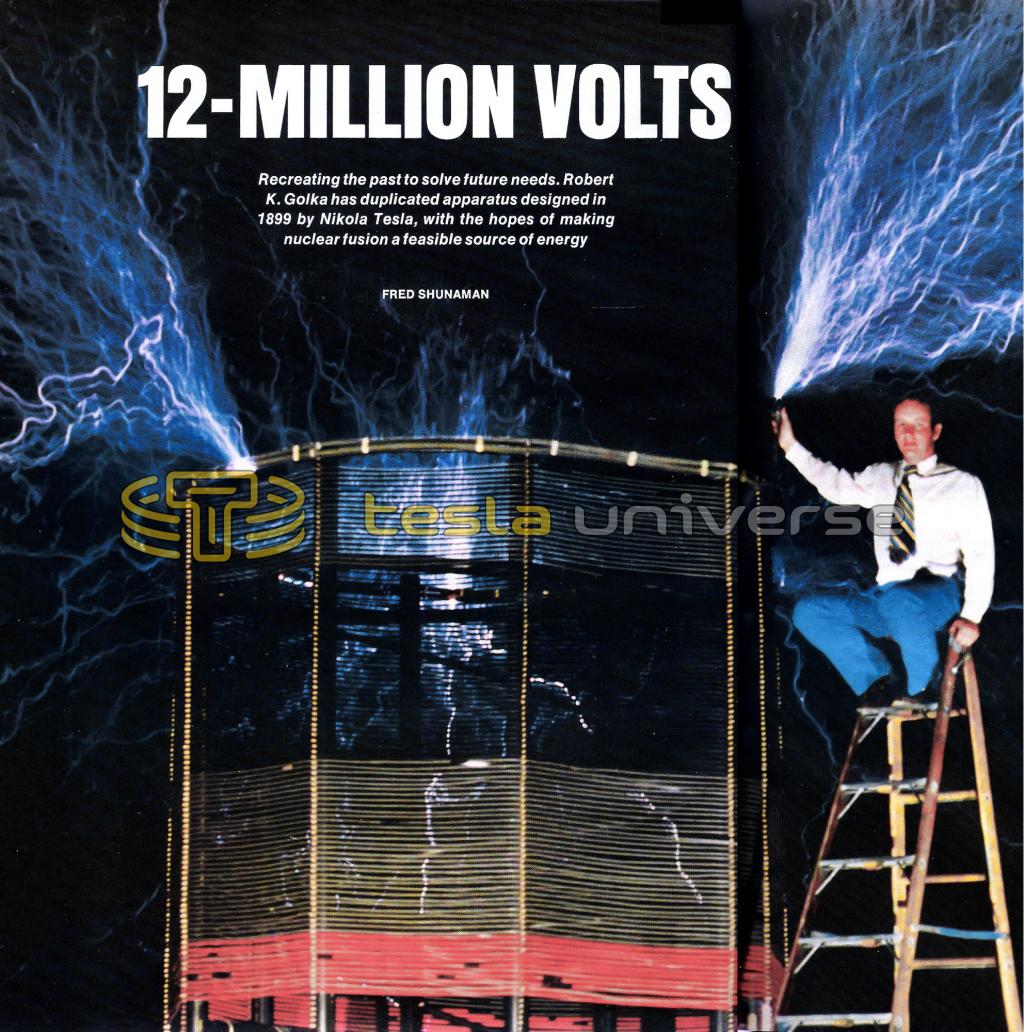 Recreating the past to solve future needs. Robert K. Golka has duplicated apparatus designed in 1899 by Nikola Tesla, with the hopes of making nuclear fusion a feasible source of energy.

In the summer of 1899, Nikola Tesla, possibly the world’s greatest engineer, set up an experimental laboratory or station near Colorado Springs with the intention (he told curious reporters and residents) of “sending a telegram from Pike’s Peak to Paris.” It is highly possible that long-distance wireless communication was the main objective of his work there, but he was probably also interested in wireless power transmission.

Tesla used a radio-frequency transformer (Tesla coil) of unheard-of dimensions and power — at least 12-million volts were generated. He was not too communicative about his experiments — either their purposes or results — and visitors were not encouraged. (This may have been partly because of the dangerous nature of the work.) So exact details are lacking.

Today — nearly 80 years later — in an Air Force hangar at Wendover, Utah, that 12-million volt record has for the first time been equalled and possibly exceeded. The second man to generate 12-million volts is Robert K. Golka, of Golka Associates, Brockton, Massachusetts. And he is doing it with equipment designed to duplicate Tesla’s as closely as possible. Mr. Golka has instituted what is now called Project Tesla to study one of the results of Tesla’s experiments that the great scientist almost brushed off as an interesting but unimportant phenomenon.

The exact equipment Tesla used cannot be determined. Probably he made numerous changes, so conflicting reports may be correct for the situation at the time reported. All agree that the primary of the Tesla coil was of heavy copper wire (1½-inch thick) placed at the bottom of the secondary, which was 51 feet in diameter. The type of conductor used for the secondary and the number of turns is not quite clear, but all reports (and the photographs) agree that there was an addition to the secondary — a coil of 100 turns, 8-feet 3-inches in diameter, placed in the center of the larger coil. The main secondary appears to have had a natural resonance of about 50 kHz; the additional coil resonated at the second harmonic, 100 kHz.

The input power was thought to be up to 50 kW, but when the coil was first energized, it blew out the generator of the Colorado Springs lighting and power system. (Tesla supervised the rebuilding). The blowout may of course have been due to a radio-frequency surge or kickback rather than to the amount of power drawn. (Of little consequence to the Colorado Springs lighting and power system.)

Two important by-products
Tesla made two important discoveries not connected with his original objective. He was an interested student of natural electricity, which the many thunderstorms of the region produced in vast abundance. He made special recording equipment to record their intensity and characteristics. These recordings gave him no room to doubt that he was observing standing waves in the earth. “Impossible as it seemed,” he reported, “this planet, despite its vast extent, behaves like a conductor of limited dimensions. The tremendous significance of this fact in the transmission of energy in my system had already become quite clear to me. Not only was it possible to send telegraphic messages to any distance without wires, as I recognized long ago, but also to impress on the entire globe the faint modulation of the human voice. Far more significant is the ability to transmit power in unlimited amounts to almost any terrestrial distance and almost without loss.”

To illustrate his point, Tesla lit a bank of 200 carbon-filament lamps — consuming about 10 kW — 26 miles from the station, a feat that has not since been equalled. This experiment was duly witnessed and recorded by his assistant, Fritz Lowenstein, later to become a prominent electronic inventor in his own right.

(It is doubtful indeed, says Mr. Golka, that power could be sent completely around the world from one source, as Tesla envisioned. The resistance losses would far outweigh the power actually used. Some rocky soil has a resistance as high as 1,000 ohms per meter.)

Ball lightning
The second discovery was recorded almost as an aside by Tesla in his description of the electrical displays of the region: “Lightning discharges are, accordingly, very frequent and sometimes of inconceivable violence. . . . Many of them resembled gigantic trunks of trees with the trunks up or down. I never saw fire balls, but as a compensation for my disappointment I succeeded later in determining their mode of formation and in producing them artificially.”

Fire balls, or ball lightning, have long been a puzzle to scientists. Many of the scientists have simply denied their existence (as a simple solution to a problem that appeared to have no reasonable answers). They are glowing balls apparently of electrical plasma, a foot or less in diameter, floating a few feet off the ground. Their exact composition and mode of formation is not known. They appear in the wake of thunderstorms and move slowly, bouncing when they strike the earth or a solid object.

Despite earlier doubts, the existence of ball lightning was pretty well established by Niels Bohr, who saw a fireball and reported it. (Possibly lesser scientists have also seen ball lightning but have remained discreetly silent about it, like the sea captain who remained below eating his dinner when the deck crew reported a sea serpent. “I don’t want to be called a liar all the rest of my life,” he said.)

A few prominent physicists have speculated and formed tentative theories about ball lightning. (Tesla was the first to try to develop a theoretical explanation.) But it was considered a special subject well away from the mainstream of scientific investigation.

All this changed with the coming of the nuclear age. Scientists have been struggling to contain and control the plasma of ionized and superheated gases resulting from the fission or fusion of nuclear materials. A constricting magnetic field in the shape of a large doughnut has been labored with for some years. Its latest name is the Tokamack, given by the Russians, meaning toroidal-confinement. In the earlier days it was known by other names! The Perhapsatron was an interesting name for an early magnetic confinement device. The Theta-Pinch and the Beta device were all variations of this idea.

Since every plasma behaves thermodynamically like a liquid, why not use surface tension to partly help in holding the plasma together? Of course other parameters will have to be exactly right for the effect to take place, but surface tension plays a predominant part, just as in the production of soap bubbles using a soapy liquid.

The various theories about ball lightning agree that it must be a plasma — a ball of ionized air or other gases. Yet it is self-contained and does show evidence of surface tension — bouncing off objects it strikes and regaining its spherical form. True, it is far from permanent, lasting about five seconds on the average — though observers have reported fire balls with a life of minutes.

Ball lightning then, might serve as a model for controlled fusion or at the very least a study of it might produce new knowledge that would be helpful in obtaining controlled fusion. But the problem of observing natural ball lightning is insurmountable. It is much more common in some areas (notably parts of Sweden and Australia) than others, but nowhere does it occur often enough (or long enough) for study.

The lightning maker
Robert K. Golka became interested in the subject when he read — in O’Neill’s Prodigal Genius — that Tesla, though he had never seen natural ball lightning, had produced it artificially during his Colorado Springs experiments. Contacting Leland Anderson, long-time Tesla student and historian, he was told that little information was available, but there might be more in Tesla’s notebooks in the Tesla Museum in Beograd, Yugoslavia.

After playing with the idea for a year, Golka went to Yugoslavia and was able to get permission to read the Colorado Springs diary. (Fortunately, Tesla wrote his notebooks in English, but Golka reports that the handwriting was such that reading the notebook was almost like translating from a foreign language.) A little experimenting with Tesla coils convinced Golka that he was on the right track, but that a much bigger coil than anything he could construct would be required. What was necessary, Golka believed, is the following.

Taking his conclusions and plans to Washington, D.C. — where more than one agency was interested in any research that might lead toward solving the problem of confining a dense highly heated plasma for thermonuclear applications — Golka succeeded in securing backing for the present Bonneville Flats installation.

The work is still in the early stages, but results are already promising. Golka has achieved voltage discharges up to 15 million (the highest yet made by man) for a period of 8 minutes, and “sparks” (or lightning bolts) rivalling the 20 to 30-footers attributed to Tesla. Already small discharges resembling ball lightning — with a life of about 0.1 second — have been observed.

This is a far cry from controlled nuclear fusion, vet there is more than a chance that — like Faraday’s “new-born infant” — it may be the first step toward techniques that could have as great an effect on our future civilization as Tesla’s development of alternating-current electricity has had on our present one. 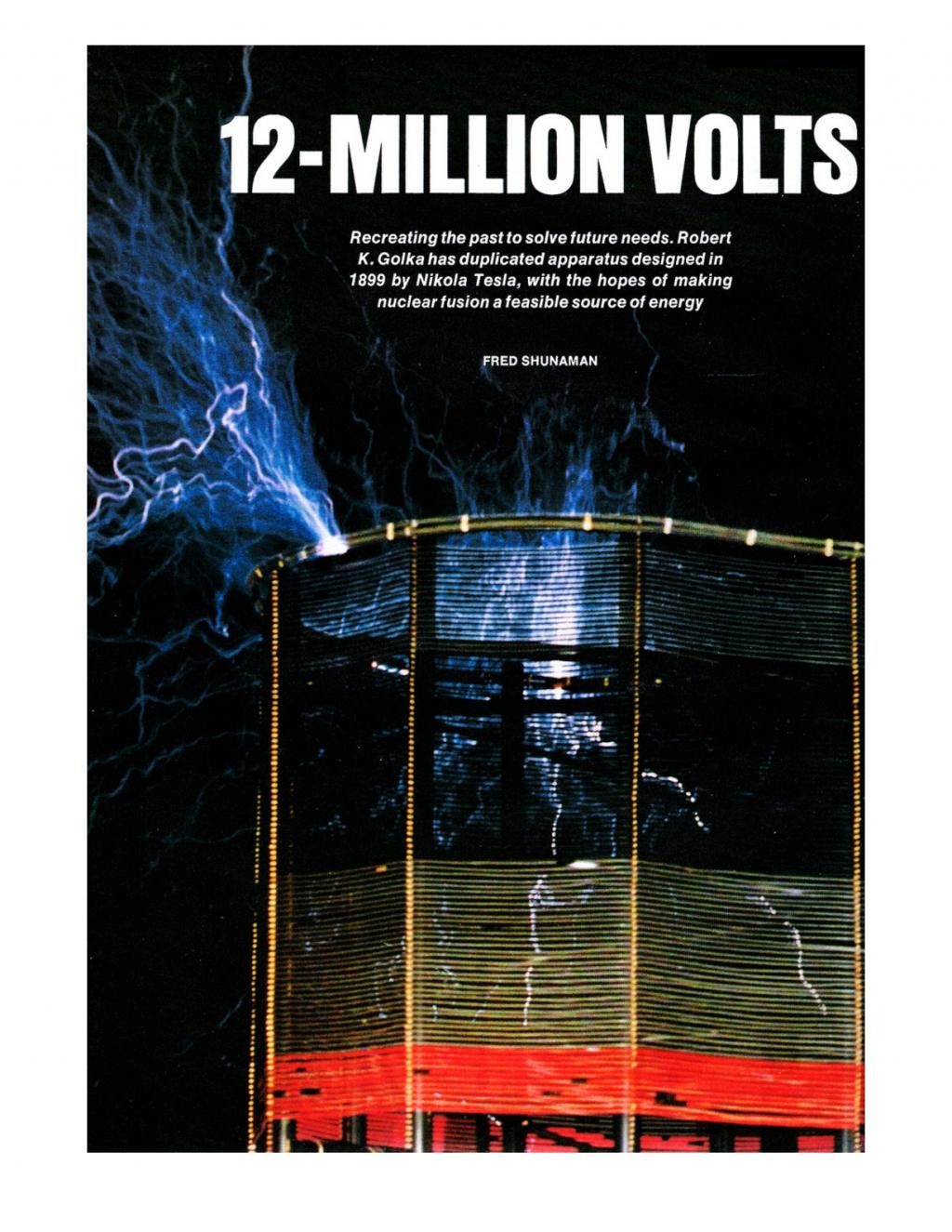