Tesla is best known (by those who know of him at all) as the genius who conceived, invented, designed and put into operation our alternating current electrical system, without which much of the Electrical Age would never have come into being. That invention — or series of inventions — freed the world from dependence on direct current, which limited the distance that power could be transmitted to a mile or two from the generating station.

Others know him as a dreamer who proposed such grandiose schemes as exciting the earth at its fundamental frequency and thus transmitting information — or even power — to any part of the globe, with little loss. Yet he was also the practical engineer who designed the complex Niagara Falls project, for many years the world’s largest generating plant.

As for grandiose projects, his generation in 1899 of more than 12 million volts at his Colorado Springs laboratory (Radio-Electronics, June 1976) was unmatched for more than 70 years. Experimenting with wireless power trans mission, he lighted a bank of 200 lamps (using about 10 kilowatts) 26 miles from the Colorado Springs installation. That feat has yet to be duplicated.

These fantastic accomplishments have overshadowed his very real work in the radio field. Yet he was one of the first to work with high frequencies, and many engineers know him only by that first radio-frequency transformer, the Tesla coil. That “coil” was invented in 1891. In 1893, speaking to the members of the Franklin Institute in Philadelphia, he discussed electrical resonance, among other subjects. Pointing out that if the inductive and capacitive reactance in the circuit were such as to cancel each other, resonance would be attained and current would increase without a theoretical limit. He explained that it was fortunate that pure resonance could not be produced because of resistance in the circuit. Otherwise he said, there would be no telling “what dangers might not lie in wait for the innocent experimenter.”

Concerning resonance, he said few words on a subject “that concerned the welfare of all. I mean,” said Tesla, “the transmission of intelligible signals and perhaps even power to any distance without the use of wires. I am becoming daily more convinced of the practicability of the scheme.” Admitting that most scientific men had doubts, he said “My conviction has grown so strong that I no longer look on this plan of energy or intelligence transmission as a mere theoretical possibility, but as a serious problem in electrical engineering, which must be carried out some day.”

Tesla continued to work with resonance, and his patent 568,178 of September 22, 1896 shows several ways of obtaining resonance in a high-frequency circuit. In 1915 he sued Marconi for infringement of that patent, but lost the case. The court just could not understand the principles involved, and was possibly influenced by Marconi’s reputation as a great man in communications. (The Marconi patent was, however, declared invalid in 1943, on the basis of prior work by Tesla and the 1896 patent, as well as later patents by John Stone Stone and Oliver Lodge.)

In 1899 Tesla staged a demonstration of radio remote control in Madison Square Garden, New York City. He maneuvered a three-foot-long model boat in a large tank, starting, stopping, reversing and steering it in response to requests from members of the audience.

The Madison Square Garden transmissions were spark. But in his studies of high frequency, Tesla pioneered two other types of transmitters that later became commercial successes in other hands. He made the first high-frequency alternators, machines like ordinary alternating current generators, but designed to produce electricity at much higher frequencies. Tesla’s alternators reached 10 kilohertz. Improved by Fessenden and Alexanderson, first to 50 and later to 100 kilohertz, these alternators were made by General Electric and became the standard high-power transmitters for transatlantic and other long-distance communication, until displaced by tube transmitters.

Tesla also pioneered in the use of the electric arc as a high-frequency generator, describing one with controlled atmosphere and magnetic blowout in 1893. Re-invented by Valdemar Poulsen in 1903, and introduced into the United States by Cyril F. Elwell, it became very popular, especially for medium and low-power transmitters and ship sets. (De Forest used the Tesla arc in his phone transmitters, because he could do so without infringing on the patents that were held by Poulsen.)

In 1901 Tesla started the construction of an eight-sided wooden tower on Long Island. Surmounted by a copper-covered hemisphere 100 feel in diameter, it rose 200 feet in the air. An air of mystery surrounded the tower and its purpose, but in 1904 Tesla issued a brochure in which he described the project as a World Wide Wireless System, which he said would provide telegraph and telephone communication, news broadcasting, stock market quotations, aids to navigation, entertainment and music broadcasting, accurate time service, facsimile and teleprinter services — in fact the whole gamut of radio services that was to come into existence decades later.

With the withdrawal of support by Tesla’s financial backer — it is said because he found that Tesla was more interested in the new project as a transmitter of wireless power than wireless communications — it became impossible to complete the work, and the tower was finally taken over by the Waldorf-Astoria in payment for a hotel bill, and torn down for scrap in 1917. This ended Tesla’s radio work, and (though he continued to invent in other fields, such as steam turbines and even auto transmissions) marked the end of his career as an important scientist and engineer. He died in semi-poverty in 1943. 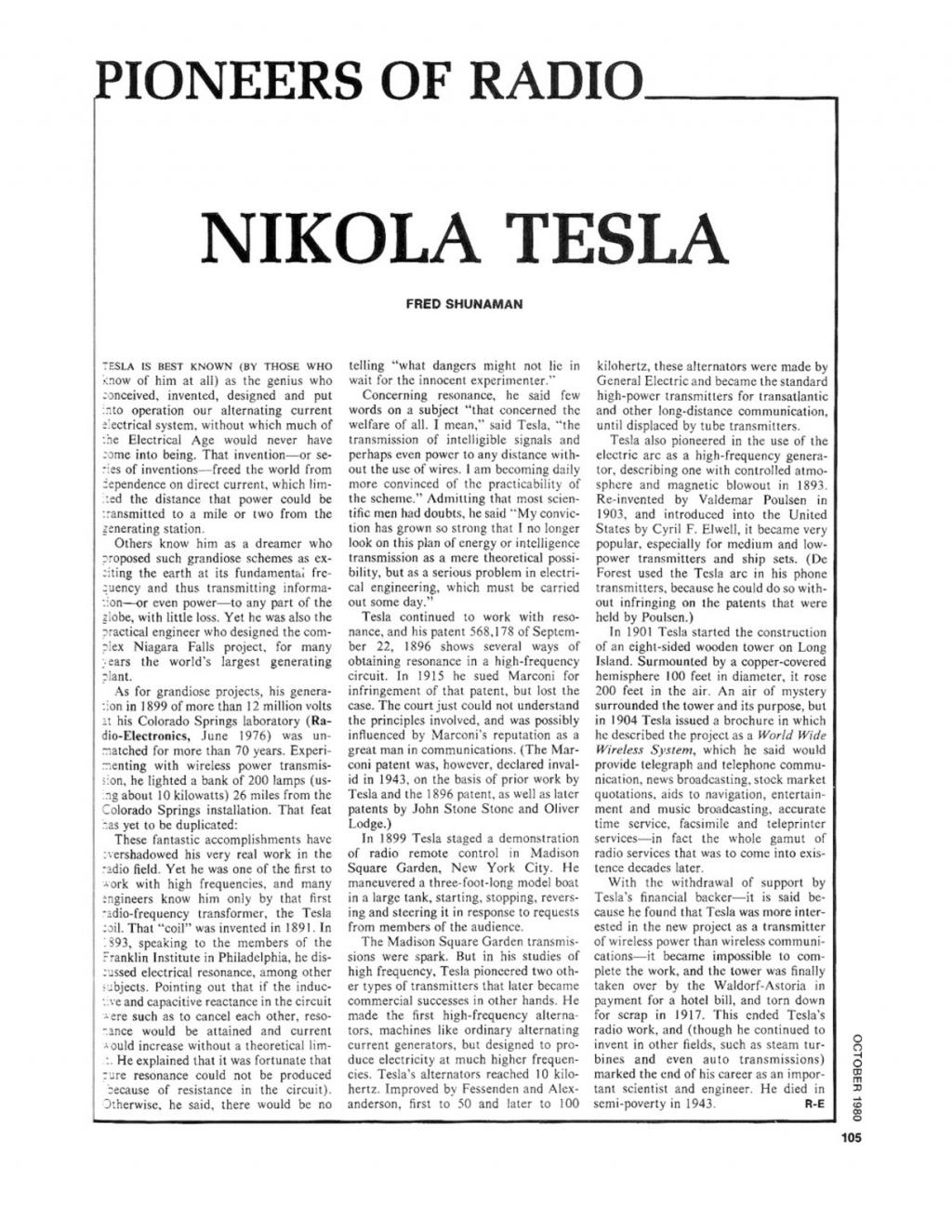