2,000 Are Present At Tesla Funeral

Cathedral of St. John the Divine Is Scene of Yugoslav State Function for Scientist

Inventors, Nobel Price winners, leaders in the electrical arts, high officials of the Yugoslav Government and of New York, and men and women who attained distinction in many other fields paid tribute yesterday to Nikola Tesla, father of radio and of modern electrical generation and transmission systems, at an impressive funeral service in the Cathedral of St. John the Divine.

The funeral service was held as an official State function of the Yugoslav Government, which was officially represented by Constantine Fotitch, Yugoslav Ambassador to the United States. Dr. Fotitch led the procession of mourners who passed the coffin before it was closed. Oscar Gavrilovitch, Yugoslav consul in New ,York, headed the list of ushers.

Many telegrams were received from officials of the United States Government, prominent scientists, literary men and many others. These included messages from Mrs. Roosevelt, on behalf of herself and the President; Vice President Henry A. Wallace, Professors Robert A. Millikan, Arthur H. Compton and James Franck, all Nobel Prize winners in physics; Professor William Lyon Phelps of Yale, Jean Piccard and Major Gen. J. O. Mauborgne. U.S.A., retired.

Mrs. Roosevelt's message read: “The President and I are deeply sorry to hear of the death of Mr. Nikola Tesla. We are grateful for his contribution to science and industry and to this country.”

“Nikola Tesla, Yugoslav born, so lived his life as to make it an outstanding sample of that power which makes the United States not merely an English-speaking nation but a nation with universal appeal. In Nikola Tesla's death the common man loses one of his best friends.”

Drs. Millikan, Compton and Franck paid tribute to Tesla as one of the world's outstanding intellects, who paved the way for many of the important technological developments in modern times.

Among the many floral offerings was a wreath from King Peter II of Yugoslavia; the Royal Yugoslav Government, Ambassador Fotitch and many Yugoslav societies.

Chief mourner was Sava Kosanovich, nephew of Dr. Tesla and president of the Eastern and Central European Planning Board, representing Yugoslavia, Czechoslovakia, Poland and Greece.

The body was taken to Ferncliffe Cemetery, Ardsley, N. Y., where it will be in the receiving vault until plans are completed. 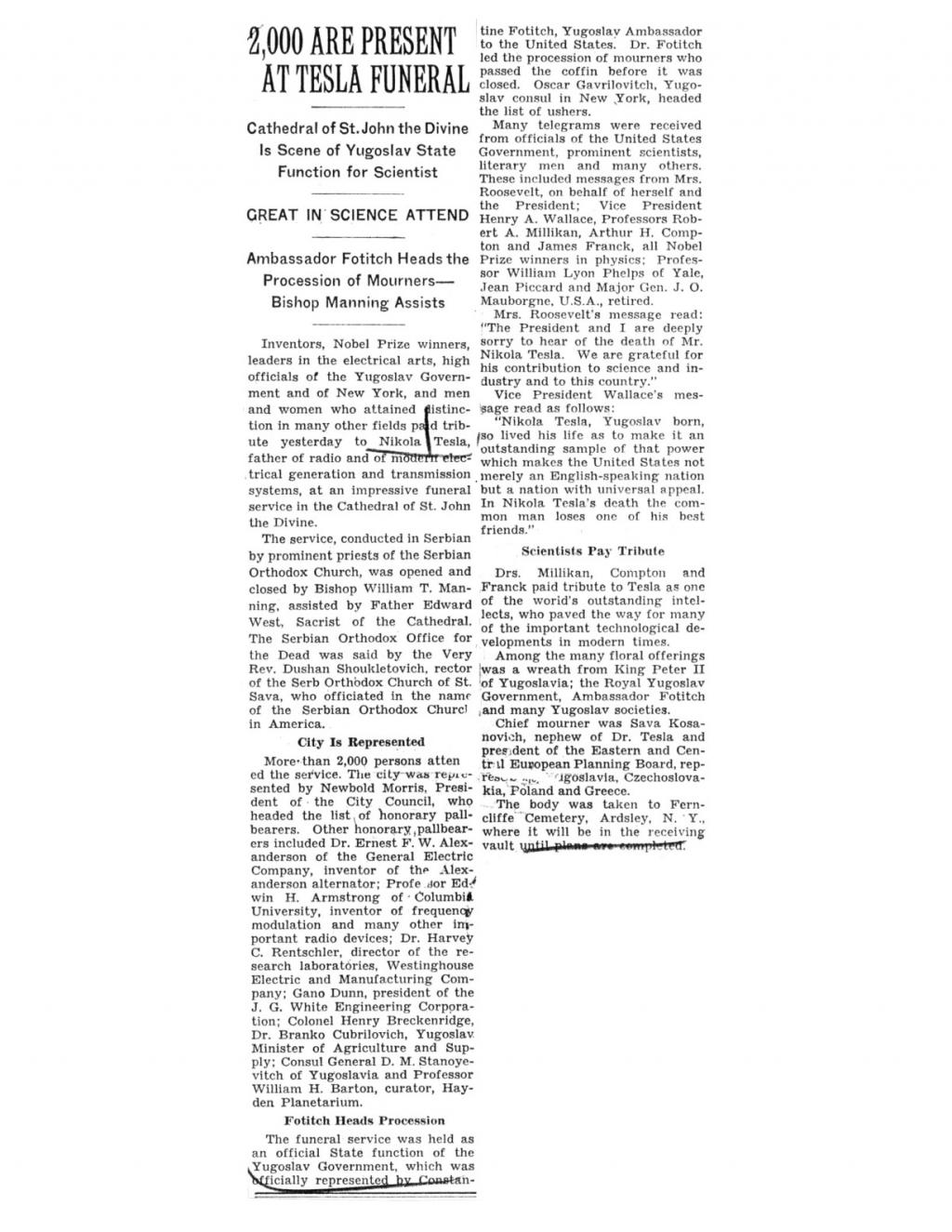