Predicts New Power Will Soon Displace All Present Fuels; Could Be Wirelessed.

Nikola Tesla, the celebrated physicist, recognized in the scientific world as the foremost living inventor, announces that “at a date not distant” a new source of power will be available everywhere, displacing coal, oil, gas, and the other established fuels of industry.

The inventor authorizes the statement that the mechanism which is designed to revolutionize industry will be when he presents it as his crowning achievement in the field of applied science, the result of thirty years of search and experimentation into and with the mysterious force which for want of a more precise terminology is called cosmic energy.

“Because no man can foretell with assurance how swiftly or how laggardly a revolutionizing scientific discovery and its mechanical complement will be commercially introduced, it is impossible for me to say how soon the new universal power will be in use. The time, however, need not be distant. The scientific uncertainties and mechanical difficulties with which I have dealt through thirty years of laboratory search and scientific experimentation have been disposed of.

“I shall not announce the scientific principles of the discovery and describe the mechanical means I have devised for carrying it out, for the present. It is sufficient at this time to say that I have performed experiments and obtained results from which I am able to calculate what the mechanism may be expected to perform. Much, of course, remains to be accomplished, but it is work not necessarily of a creative kind; it can be done by many, and hence development to the point of actual operation may be enormously speeded up.

“Night will not interrupt the flow of the new power supply. The disappearance of the sun below the horizon will not shut it off.

“Any number of such central plants can be built, so there is no limit to the volume of power which it will be possible to develop for the turning of machinery — for the running of trains and automobiles, the driving of ships, the operating of factories, the myriad different motor tasks now performed by engines and machines which derive their power from the regular fuels of industry.

“My statement of this discovery and invention, the result of nearly a third of a century of scientific toil, should serve to quiet the absurd report which has got about that I have perfected a portable engine which by extricating atomic energy will drive the largest steamship across the ocean. I have smashed probably trillions of atoms, and have definitely determined that they contain no available energy. The theory that they do is a futile dream. But the new cosmic power, the harnessing of the energy of the universe to the machinery of men, that is not a dream.”

The world of science lists Dr. Tesla as the discoverer of wireless transmission — now commonly called radio; of the induction motor and the alternating system of power transmission universally employed for supplying electric light, heat and power; of the cosmic ray and other facts of physical science; as the inventor of the “Tesla coil” and scores of other electrical and mechanical appliances which are of the magic or present-day civilization.

On the occasion of the conferring of the Edison Medal on Dr. Tesla, Prof. E. A. Kennelly, of Harvard University, electrical engineering authority and author, said:

“Tesla is the man who devised the rotating magnetic field that set wheels going round all over the world, and who made the phenomena of high frequency known, a revelation to science and art unto all time.” 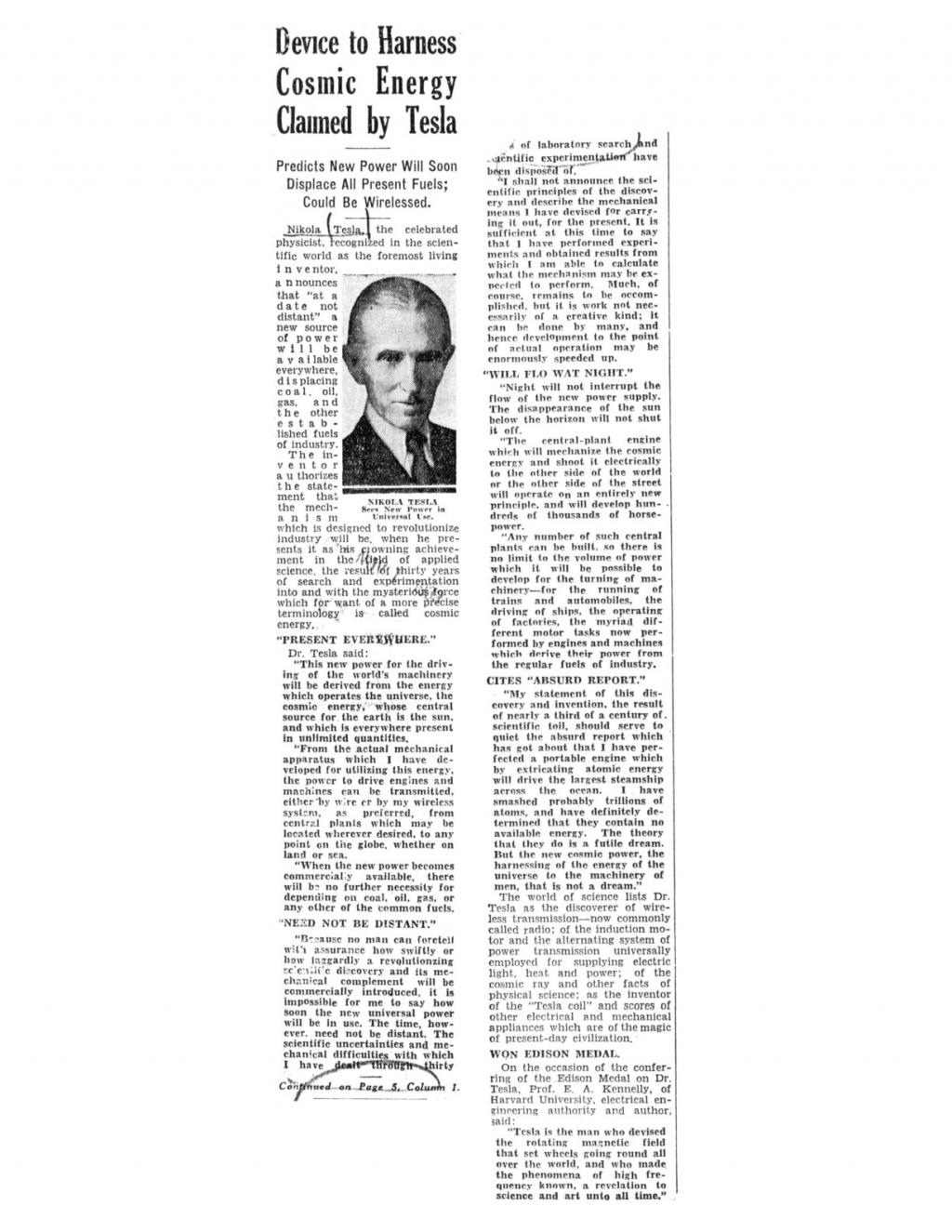