In order to produce the most intense effects, we have first to consider that, whatever their nature, they depend necessarily on the intensity of the cathode streams. Then, again, being dependent on the magnitude of the potential, it follows that the highest attainable electrical pressure is desirable.

To obtain high potentials we may avail ourselves of an ordinary induction coil, or of a static machine, or preferably of a disruptive discharge coil. If we put two electrodes in a bulb, or use one inside and another outside electrode, we limit the potential, for the presence not only of the anode, but of any conducting object, has the effect of reducing the practicable potential on the cathode. Thus, to secure the result aimed at, one is driven to the acceptance of a single electrode bulb, the other terminal being as far remote as possible.

Having selected the induction apparatus and type of bulb, the next important consideration is the vacuum. On this subject I am able to make known a fact with which I have long been acquainted, and of which I have taken advantage in the production of vacuum jackets and incandescent bulbs, and which I subsequently found to be of the utmost importance, not to say essential, for the production of intense Roentgen shadows. I refer to a method of rarefaction by electrical means to any degree desirable, far beyond that obtainable by mechanical appliances.

Though this result can be reached by the use of a static machine, as well as of an ordinary induction coil giving a sufficiently high potential, I have found that by far the most suitable apparatus, and one which secures the quickest action, is a disruptive coil. It is best to proceed in this way: The bulb is first exhausted by means of an ordinary vacuum pump to a rather high degree, though my experiences have shown that this is not absolutely necessary, as I have also found it possible to rarefy, beginning from low pressure. After being taken down from the pump, the bulb is attached to the terminal of the disruptive coil, preferably of high frequency of vibration, and usually the following phenomena are noted: First, there is a milky light spreading through the bulb, or possibly for a moment the glass becomes phosphorescent, if the bulb has been exhausted to a high degree. At any rate, the phosphorescence generally subsides quickly and the white light settles around the electrode, whereupon a dark space forms at some distance from the latter. Shortly afterwards the light assumes a reddish color and the terminal grows very hot. This heating, however, is observed only with powerful apparatus. It is well to watch the bulb carefully and regulate the potential at this stage, as the electrode might be quickly consumed.

After some time the reddish light subsides, the streams becoming again white, whereupon they get weaker and weaker, wavering around the electrode until they finally disappear. Meanwhile, the phosphorescence of the glass grows more and more intense, and the spot where the stream strikes the wall becomes very hot, while the phosphorescence around the electrode ceases and the latter cools down to such an extent that the glass near it may be actually ice-cold to the touch. The gas in the bulb has then reached the required degree of rarefaction. The process may be hastened by repeated heating and cooling and by the employment of a small electrode.

I may state here that the experimenter need not be deterred from using a glass bulb, as I believe the opacity of glass, as well as the transparency of aluminum, are somewhat exaggerated, inasmuch as I have found that a very thin aluminum sheet throws a marked shadow, while, on the other hand, I have obtained impressions through a thick glass plate.

The above method is not only valuable as a means of obtaining the high vacua desired, but it is still more important, because the phenomena observed throw a light on the results obtained by Lenard and Roentgen.

Though the phenomenon of rarefaction under above conditions admits of different interpretations, the chief interest centers on one of them, to which I adhere — that is, on the actual expulsion of the particles through the walls of the bulb. I have lately observed that the latter commences to act properly upon the sensitive plate only from the point when the exhaustion begins to be noticeable, and the effects produced are the strongest when the process of exhaustion is most rapid, even though the phosphorescence might not appear particularly bright. Evidently, then, the two effects are closely connected, and I am getting more and more convinced that we have to deal with a stream of material particles, which strike the sensitive plate with great velocities. Taking as a basis the estimate of Lord Kelvin on the speed of projected particles in a Crookes’ bulb, we arrive easily by the employment of very high potentials to speeds of as much as a hundred kilometers a second.

It may not be known that even an ordinary streamer, breaking out suddenly and under great pressure from the terminal of a disruptive coil, passes through a thick glass plate as though the latter were not present. Unquestionably, with such coils pressures are practicable which will project the particles in straight lines even under atmospheric pressure. I have obtained distinct impressions in free air, not by streamers, as some experimenters have done, using static machines or induction coils, but by actual projection, the formation of streamers being absolutely prevented by careful static screening.

A valuable evidence of the nature of the radiations and progress in the direction of obtaining strong impressions on the plate might be arrived at by perfecting plates especially sensitive to mechanical shock or impact. There are chemicals suitable for this, and the development in this direction may lead to the abandonment of the present plate. Furthermore, if we have to deal with streams of material particles, it seems not impossible to project upon the plate a suitable substance to insure the best chemical action.

By exposing the head to a powerful radiation strange effects have been noted. For instance, I find that there is a tendency to sleep and the time seems to pass away quickly. There is a general soothing effect, and I have felt a sensation of warmth in the upper part of the head. An assistant independently confirmed the tendency to sleep and a quick lapse of time. Should these remarkable effects be verified by men with keener sense of observation, I shall still more firmly believe in the existence of material streams penetrating the skull. Thus it may be possible to project a suitable chemical into any part of the body.

Since my above-mentioned discoveries I have made considerable progress, and can presently announce one more result of importance. I have lately obtained shadows by reflected rays only, thus demonstrating beyond doubt that the Roentgen rays possess this property. One of the experiments may be cited here. A thick copper tube, about a foot long, was taken and one of its ends tightly closed by the plate-holder containing a sensitive plate, protected by a fiber cover as usual. Near the open end of the copper tube was placed a thick plate glass at an angle of 45° to the axis of the tube. A single terminal bulb was then suspended above the glass plate at a distance of about eight inches, so that the bundle of rays fell upon the latter at an angle of 45°, and supposedly reflected rays passed along the axis of the copper tube. An exposure of forty-five minutes gave a clear and sharp shadow of a metallic object. This shadow was produced by the reflected rays, as the direct action was absolutely excluded, it having been demonstrated that, even under the severest tests with much stronger actions, no impression whatever could be produced upon the film through a thickness of copper equal to that of the tube. Concluding from the intensity of the action by comparison with an equivalent effect due to the direct rays, I find that approximately two per cent of the latter were reflected from the glass plate in this experiment. 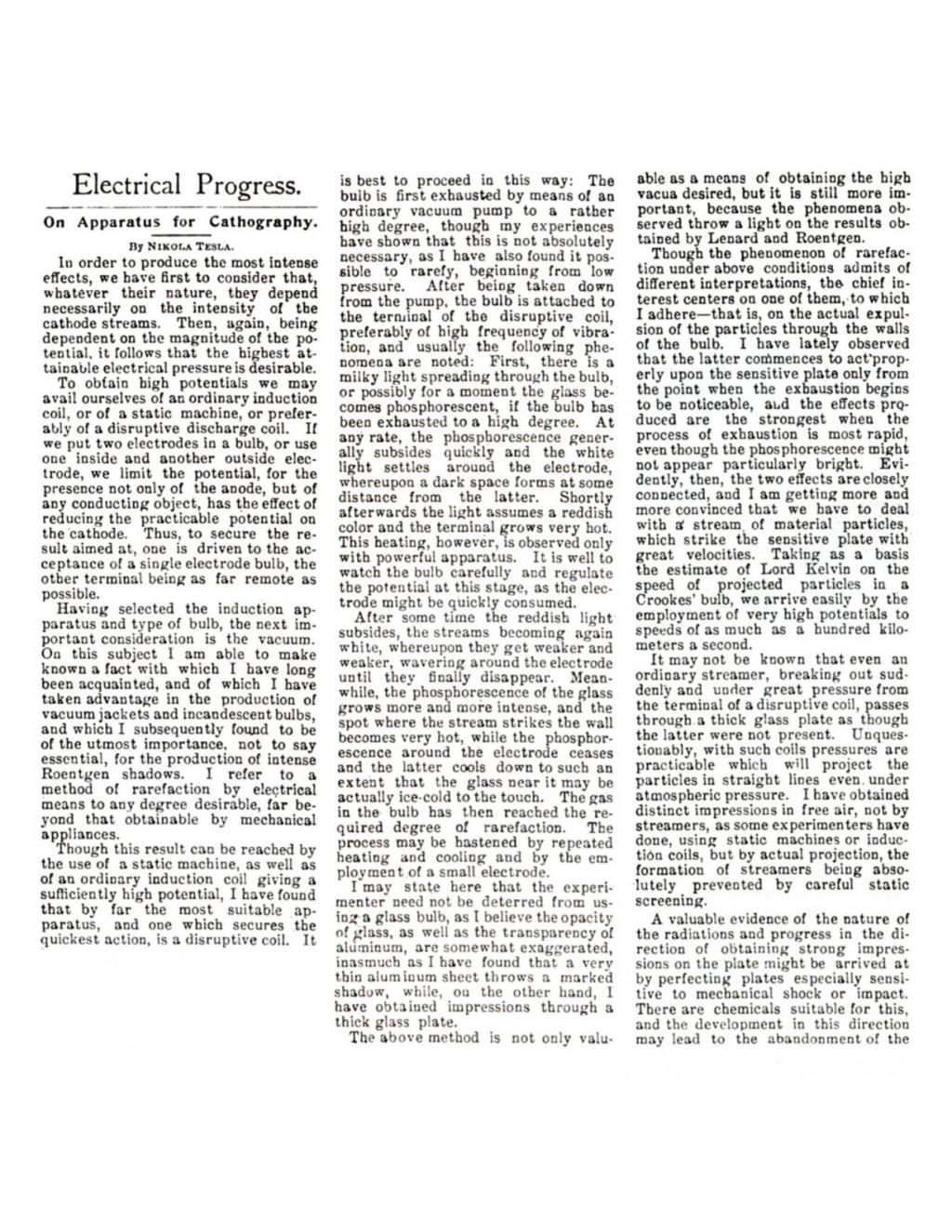