From Nikola Tesla - He Writes About His Experiments in Electrical Healing

Some weeks ago this journal published an interesting article concerning electrical oscillations as observed by the eminent scientist, Nikola Tesla. So much interest was shown in the subject that Mr. Tesla was appealed to directly and in response to that appeal he sends to The Detroit Free Press this open letter:

During the past few weeks I have received so many letters concerning the same subject that it was entirely beyond my power to answer all of them individually. In view of this I hope that I shall be excused for the delay, which I must regret, in acknowledging the receipt, and also for addressing this general communication in answer to all inquiries.

The many pressing demands which have been made upon me in consequence of exaggerated statements of the journals have painfully impressed me with the fact that there are a great many sufferers, and furthermore that nothing finds a more powerful echo than a promise held out to improve the condition of the unfortunate ones.

The members of the medical fraternity are naturally more deeply interested in the task of relieving the suffering from their pain, and, as might be expected, a great many communications have been addressed to me by physicians. To these chiefly this brief statement of the actual facts is addressed.

Some journals have confounded the physiological effects of electrical oscillations with those of mechanical vibrations, this being probably due to the circumstance that a few years ago I brought to the attention of the scientific men some novel methods and apparatus for the production of electrical oscillations which, I learn, are now largely used in some modification or other in electro-therapeutic treatment and otherwise. To dispel this erroneous idea I wish to state that the effects of purely mechanical vibrations which I have more recently observed, have nothing to do with the former.

Mechanical vibrations have often been employed locally with pronounced results in the treatment of diseases, but it seems that the effects I refer to have either not been noted at all, or if so, only to a small degree, evidently because of the insufficiency of the means which have eventually been employed in the investigations.

While experimenting with a novel contrivance, constituting in its simplest form a vibrating mechanical system, in which from the nature of the construction the applied force is always in resonance with the natural period, I frequently exposed my body to continued mechanical vibrations. As the elastic force can be made as large as desired, and the applied force used be very small, great weights, half a dozen persons, for instance, may be vibrated with great rapidity by a comparatively small apparatus.

I observed that such intense mechanical vibrations produce remarkable physiological effects. They affect powerfully the condition of the stomach, undoubtedly promoting the process of digestion and relieving the feeling of distress, often experienced in consequence of the imperfect function of the organs concerned in the process. They have a strong influence upon the liver, causing it to discharge freely, similarly to an application of a catharic. They also seem to affect the glandular system, notably in the limbs; also the kidneys and bladder, and more or less influence the whole body. When applied for a longer period they produce a feeling of immense fatigue, so that a profound sleep is induced.

The excessive tiring of the body is generally accompanied by nervous relaxation, but there seems to be besides a specific action on the nerves.

These observations, though incomplete, are, in my own limited judgment, nevertheless positive and unmistakable, and in view of this and of the importance of further investigation of the subject by competent men I prepared about a year ago a machine with suitable adjustments for varying the frequency and amplitude of the vibrations, intending to give it to some medical faculty for investigation. This machine, together with other apparatus, was unfortunately destroyed by fire a year ago, but will be reconstructed as soon as possible.

In making the above statements I wish to disconnect myself with the extraordinary opinions expressed in some journals which I have never authorized and which, though they may have been made with good intent, cannot fail to be hurtful by giving rise to visionary expectations. 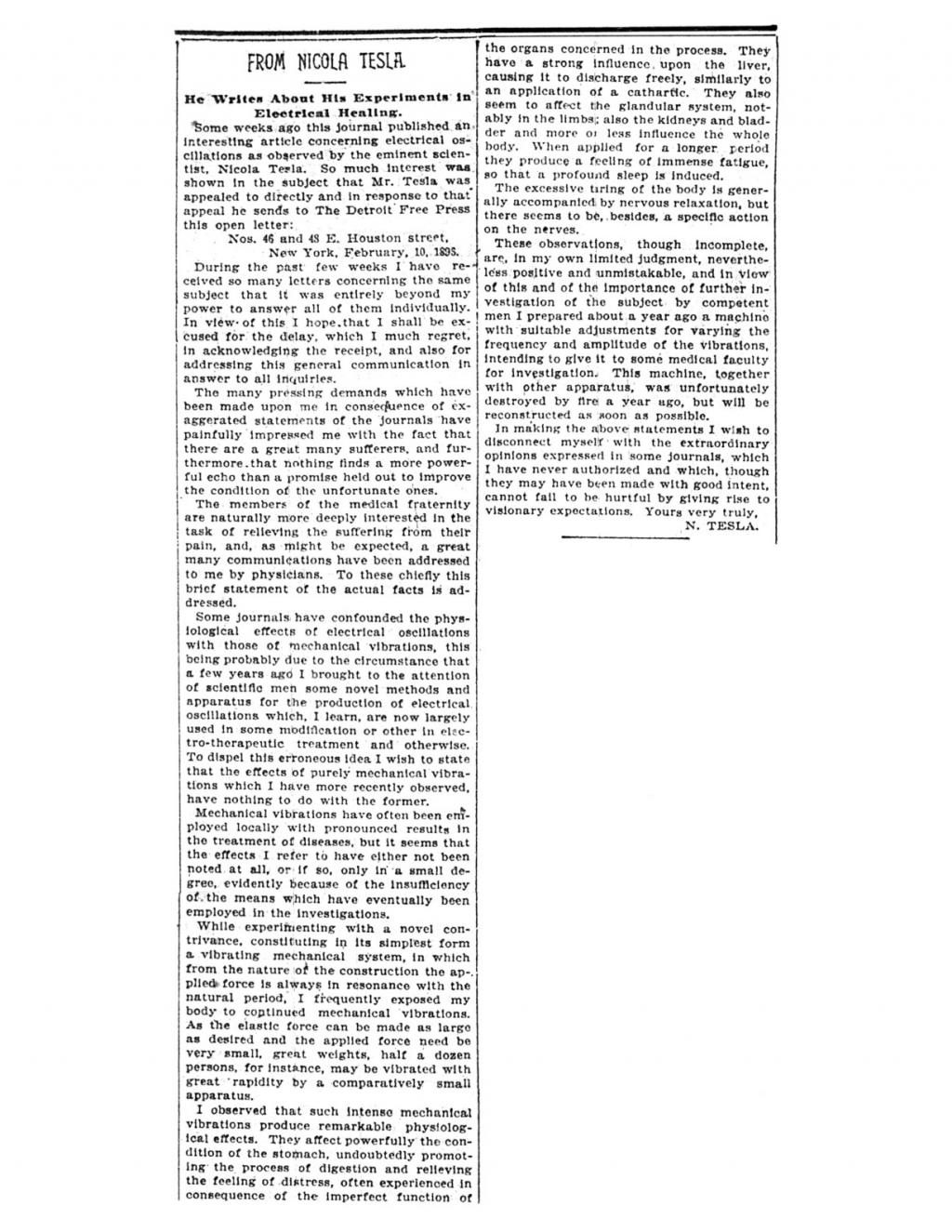