A Submarine Destroyer That Really Destroys - And Without A Soul On Board To Guide It.

Tesla's Wonderful New Boat That Will Dart Stealthily Under Water Without Officers or Crew, Directed by Wireless Electricity, and Steeringself as It Shoots Off Its Terrific Explosives.

Yesterday Nikola Tesla gave to the Sunday Journal exclusively the news of his latest invention — a submarine torpedo boat. He has perfected his device after observing the defects of the torpedo boats in the recent war, and noting the fatalities of submarine boats invented up to date. His submarine boat will carry no lives to risk, but can be directed at a distance of miles from on shore or from the deck of a war ship. The power to do this will be the electric vibrations of the air used in wireless telegraphy. By this means a whole flotilla of submarine destroyers can be turned against a hostile fleet, and perhaps destroy it, without the enemy knowing how they were attacked. This seems almost incredible until the great magician of electricity explains his wonderful invention, point by point, in the following statement.

“I am now prepared to announce through the Journal my invention of a submarine torpedo boat that I am confident will be the greatest weapon of the navy from this time on.

“The almost utter uselessness of the present kind of torpedo boat has been conclusively demonstrated in the recent war. Neither the courage and skill of the Americans nor the desperate extremities of the Spaniards were able to bring the torpedo boats into successful action. These frail craft, of which so much was expected, simply made an easy target for land batteries and rapid-fire guns of opposing war ships.

“The submarine boats, on the other hand, which have up to this time been built to carry torpedoes have proved death traps for men and were consequently ineffective. The submarine boat, or, more properly speaking, the submarine destroyer, which I have invented is as compact as the torpedo itself. In fact, it is simply an enlarged torpedo shell, thirty-six and a half feet long, loaded with other torpedoes to discharge. Like a torpedo, also, it has its own propelling device. But here the likeness stops. The ordinary torpedo, once launched, plunges head on blindly and no known power can turn it one way or another. It hits or misses, according to the trueness with which it is aimed at its launching.

“But my submarine boat, loaded with its torpedoes, can start out from a protected bay or be dropped over a ship’s side, make its devious way below the surface, through dangerous channels of mine beds, into protected harbors and attack a fleet at anchor, or go out to sea and circle about, watching for its prey, then dart upon it at a favorable moment, rush up to within a hundred feet if need be, discharge its deadly weapon and return to the hand that sent it. Yet through all these wonderful evolutions it will be under the absolute and instant control of a distant human hand on a far-off headland, or on a war ship whose hull is below the horizon and invisible to the enemy.

“I am aware that this sounds almost incredible and I have refrained from making this invention public till I had worked out every practical detail of it. In my laboratory I now have such a model, and my plans and description at the Patent Office at Washington show the full specifications of it.

“As to the mechanism which is to be stored in this submarine shell: The first and most essential thing is a motor, with storage battery to drive the propeller. Then there are smaller motors and batteries to operate the steering gear, on the same principle that an ordinary vessel is now steered by steam or electricity. Besides these there are still other storage batteries and motors to feed electric signal lights. But in order that the weight of the machinery shall not be too great to destroy the buoyancy or make the boat go too deep in the water compressed air motors will also be used to perform certain functions, such as to fill and empty the water tanks which raise the boat to the surface or sink it to any required depth. Pneumatic air or motors will also fire the torpedoes and pump out the water that may leak in at any time.

“This submarine destroyer will be equipped with six 14-foot Whitehead torpedoes. These will be arranged vertically in two rows in the bow. As one torpedo falls into position and is discharged by pneumatic force, another torpedo, by the force of gravity, falls into the position of the first one, the others above being held up by automatic arms. They can be fired as rapidly as a self-cocking revolver is emptied or at intervals of minutes or hours. The discharge takes place through a single tube, projecting straight ahead in the bow. The small amount of water which leaks through each time is caught by drain pipes and a compressed air pump instantly expels it. As each torpedo is expelled a buoyancy regulator will open the sea cocks and let enough water in the ballast tanks to make the buoyancy uniform and keep the boat at the same distance beneath the surface.

“This submarine destroyer will carry a charge of torpedoes greater than that of the largest destroyers now in use. Those vessels of five hundred tons each which cost the Government $500,000, carry but three or four torpedoes, while this simple submarine destroyer, which can be built for $48,000 to $50,000 or less, will carry six torpedoes. It will have, also, the incalculable advantage of being absolutely invisible to an enemy, and have no human lives to risk or steam boilers to blow up and destroy itself.

“All that is necessary to make this submarine boat subject to perfect control at any distance is to properly wire it, just like a modern house is wired so that a button here rings a bell, a lever there turns on the lights, a hidden wire somewhere else sets off a burglar alarm and a thermal device give a fire alarm.

“The only difference in the case of the submarine boat is in the delicacy of the instruments employed. To the propelling device, the steering gear, the signal apparatus and the mechanism for firing the torpedoes are attached little instruments which are attuned to a certain electro-magnetic synchronism.

“Then there is a similar set of synchronistic instruments all connected to the little switchboard, and placed either on shore or on an ordinary war ship. By moving the lever on the switchboard I can give the proper impulse to the submarine boat to go ahead, to reverse, throw the helm to port or starboard, rise, sink, discharge her torpedoes or return.

“It might be thought that some great power would be necessary to be projected across miles of distance and operate on the far-off boat. The power is all stored in the submarine boat itself — in its storage batteries and compressed air. All that is needed to affect the synchronistic instruments is a set of high alternating currents, which can be produced by my oscillator attached to any ordinary dynamo situated on shore or on a war ship.

“How such an apparently complicated mechanism can be operated and controlled at a distance of miles is no mystery. It is as simple as the messenger call to be found in almost any office. This is a little metal box with a lever on the outside. By moving the crank to a certain point it gives vibrating sounds and springs back into position, and its momentary buzzing calls a messenger. But move this same crank a third further around the dial and it buzzes still longer, and pretty soon a policeman appears, summoned by its mysterious call. Again, move the crank this time to the farthest limit of the circle and scarcely has its more prolonged hum of recoil sounded when the city fire apparatus dashes up to your place at its call.

“Now, my device for controlling the motion of a distant submarine boat is exactly similar. Only I need no connecting wires between my switchboard and the distant submarine boat, for I make use of the now well-known principle of wireless telegraphy. As I move this little lever to points which I have marked on a circular dial I cause a different number of vibrations each time. In this case two waves go forth at each half turn of the lever and affect different parts of the distant destroyer’s machinery.

“How such submarine destroyers should actually be used in war I leave for naval tacticians to determine. But it seems to me that they could best be operated by taking a number on board a large fast auxiliary cruiser like the St. Louis or St. Paul, launch them, several at a time, like life boats, and direct their movements from a switch board placed in the forward fighting top.

“In order that the director of the submarine destroyer may know its exact position at every movement, two masts, at bow and stern, will project up just above the water, too minute to be seen or hit by an enemy’s guns by day, and by night they will carry hooded lights.

“The lookout placed in the fighting top could detect a hostile ship off on the horizon while the auxiliary cruiser’s big hull is still invisible to the enemy. Starting these little destroyers out under direction of a man with a telescope, they could attack and destroy a whole armada — destroy it utterly — in an hour, and the enemy never have a sight of their antagonists or know what power destroyed them. A big auxiliary cruiser, used to carry these submarine destroyers, could also carry a cargo of torpedoes sufficient to conduct a long campaign and go half way around the world.

“She could carry the gun cotton and other explosives needed to load the torpedoes in safe magazines below the water line, and do away with much of the danger of transporting loaded torpedoes. When necessary for use the war heads could be loaded, fitted to the torpedoes, and the submarine destroyers fully equipped.

“A high, projecting headland overlooking a harbor and the sea would also be a good point on which to establish a station and have the destroyers laid up at docks below ready to start.

“That is the whole story of my latest invention. It is simple enough, you say. Of course it is, because I have worked all my life to make each one of the details so simple that it will work as easily as the electric ticker in a stock broker’s office.” 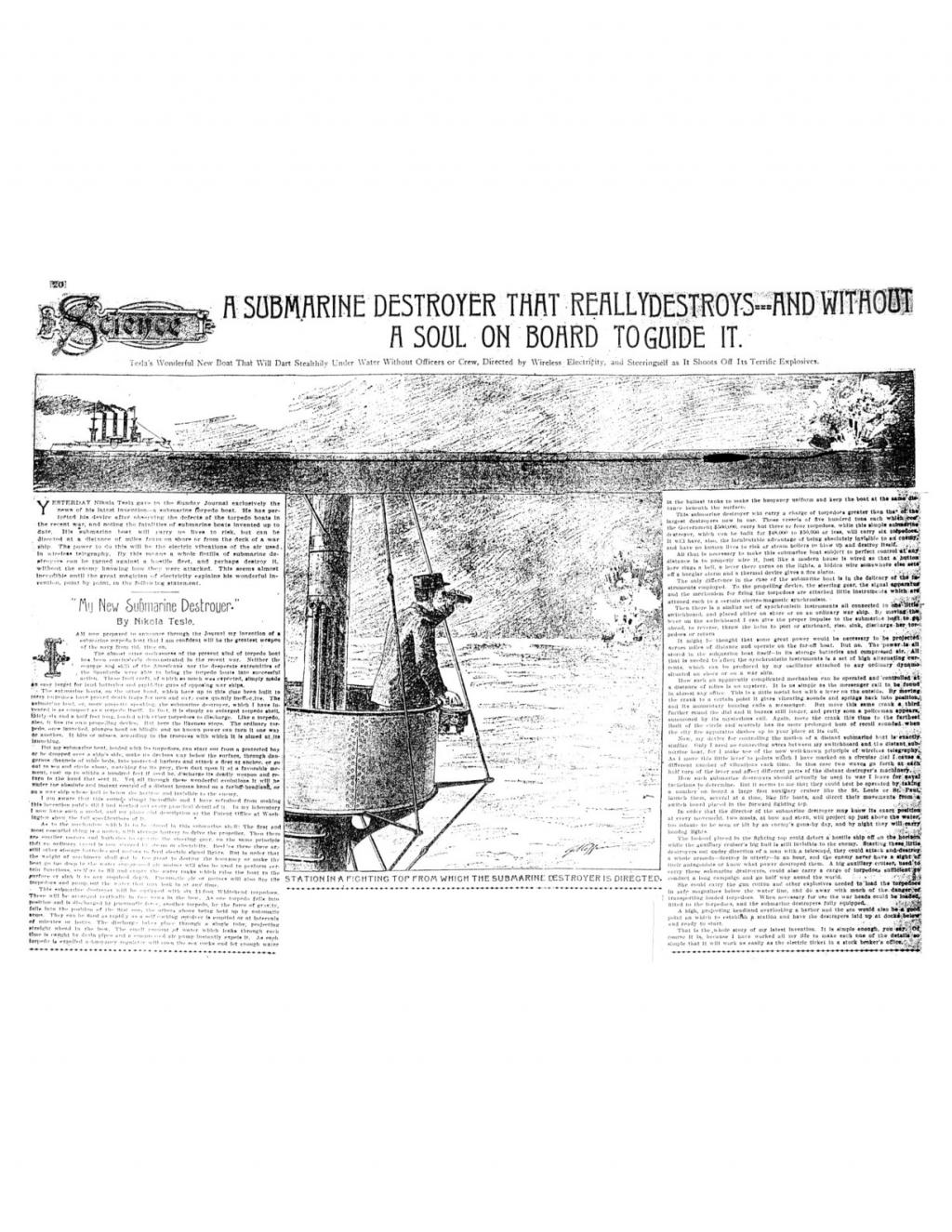