Artificial Daylight at Last Made by Tesla

The promise made by Nikola Tesla to the world some two years ago that he would soon give it a means of lighting its homes, its offices and its streets at night time by “artificial daylight” has been fulfilled.

The invention has been entirely completed for several weeks. A day or two ago the authoritative announcement was made that contracts have already been signed with several New York business houses to equip their business places with the new light at once. The promoters of the company which is pushing the new invention are so certain of its great practical utility that they predict that it must soon supplant the arc lamp.

“Vacuum tube lighting by high frequency currents” is what Tesla himself calls it. The name, though clumsy, is sufficiently descriptive. The essential parts are a vacuum tube, and a special current of high frequency, produced by a special dynamo, of Tesla’s invention. “The tubes,” Mr. Tesla explains, “have had all the air pumped out, but, of course, are full of ether. The passage of this special current sets the ether in motion, forming light waves. The light differs from arc illumination in that it has no particular center. The whole tube glows and sheds a radiance like daylight all around.”

The tubes, of course, are sealed tight at both ends. A wire is made fast to one end, but there is no wire inside. The tubes at present in use are about a foot long. For special purposes, such as studio illumination, street lighting and so on, they can be made any size up to a yard.

The glory and the beauty of them is that their light goes all over the place to be illumined - is as strong in the corners of a room as directly under the tube. Hence the truth of its name, artificial daylight. A lighted tube in a room has exactly the effect of daylight flooding the windows. Notwithstanding the tube itself is not trying to the eyes. You may look steadily at it, with no evil effects whatever.

In incandescent lighting 97 per cent of the electric current goes to making the filament hot, leaving but 3 per cent for illumination. And this brings us to a second long advantage of the vacuum tube. It never grows hot. You may touch the glass an hour after the light is turned on and find it as cool as when first lighted. An electric bulb in like case is hot enough to scorch, not to mention giving headaches to the luckless mortals who happen to sit directly underneath or beside it.

The tubes can be attached to the electric light fixtures in common use, but cannot be illumined by the ordinary current. Or rather they can be made to glow with it, but the process is too costly. That was one thing that made the wise men doubtful in the beginning. A few of them thought Tesla might probably perfect his light process, but were firm in the belief that it would remain too costly for commercial use.

Tesla’s new dynamo has changed all that. Contracts now signed insure that several important structures in New York city will be equipped with the new light.

There can be no doubt that it will rapidly supplant other methods of illumination as soon as moneyed men build and operate high frequency current stations. The first cost of wires, tubes, etc., is about the same as for incandescent lighting, but the tubes have the very great virtue of not burning out after the manner of incandescent globes or carbon pencils, hence the cost of operation will be very much less.

When it comes to use there is simply no comparison possible. It is just the same as having a day twenty-four hours long. Everywhere, for every purpose, artificial daylight equals the real thing.

Witness this picture of the inventor’s hand. The photograph for it was made at midnight, in his laboratory, with a two-second exposure. It was not only taken, but printed by the artificial daylight, yet it will be seen that it shows clearly the lines of the palm and the texture of cuff and sleeve.

Nothing remains now but to equip the world with proper wires, dynamos, and so on. Men with money know a good thing when they see it, even without artificial daylight, so it is very likely that in a matter of twelve months there will be practically no night in any considerable city of the world. 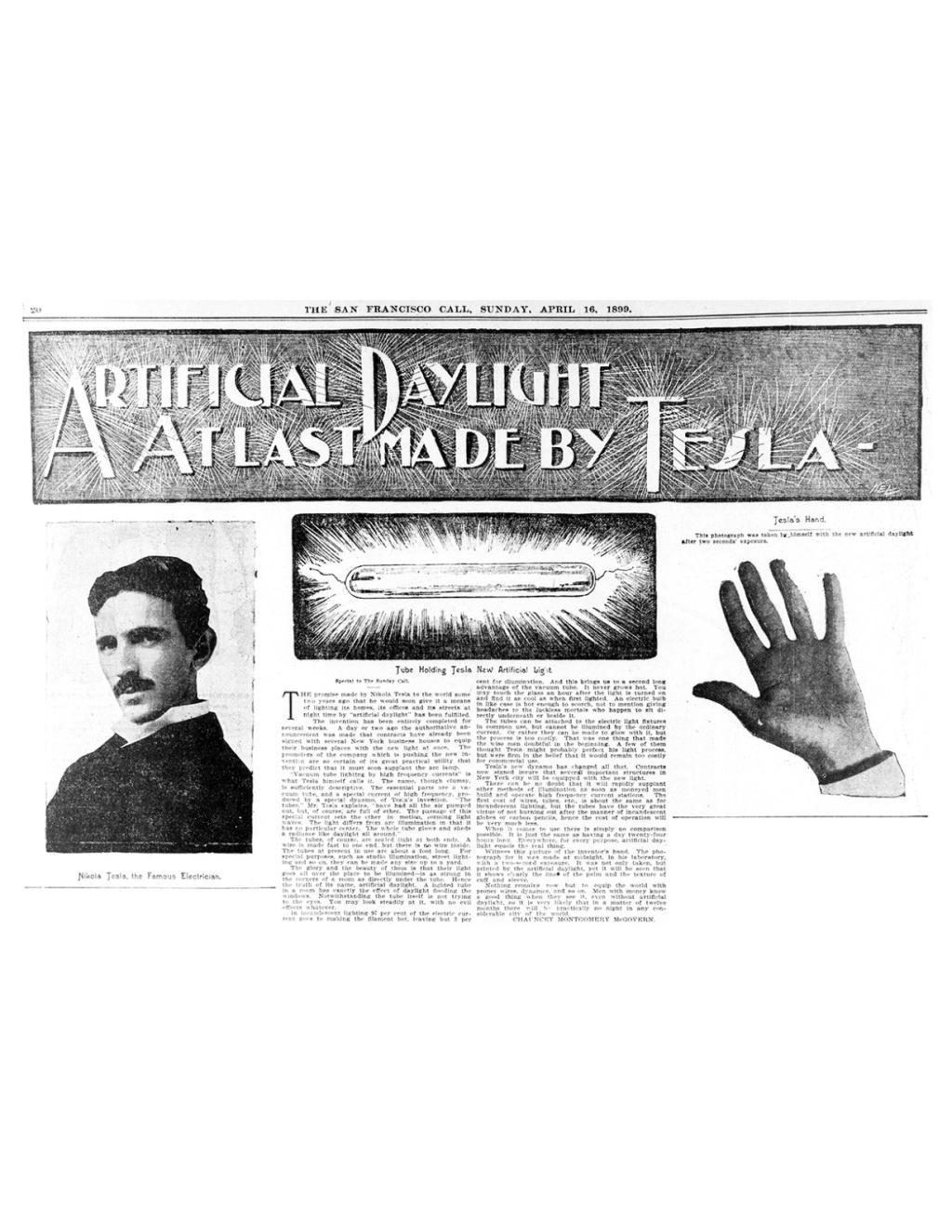