Scientist, 77 Tomorrow, to Reveal Result of Half Lifetime's Study Soon

Cheap Energy for All

Dr. Nikola Tesla, who will be seventy-seven years old tomorrow, looked back yesterday over a lifetime in which he has been variously called a madman and a wizard of electricity and told of his plans for the tapping of a new source of energy so vast and so revolutionary in effect that he predicts he will be remembered for this alone.

This problem he has worked on for thirty-five years and within the next year he will be able to publish his findings, he says, with experimental data that will convince scientists and the lay public alike. What the nature of the new form of energy is he would not say beyond that it was “undreamed of,” that it was “violently opposed” to Einsteinian physics, that the sun has something to do with it, and that the energy would be available anywhere over the earth's surface in illimitable quantities. The primary cost of securing the energy will be high, the inventor said, but once the apparatus is installed the cost of production will be negligible and the machines will last 500 years.

“There is a possibility of mistake,” he said, “but I say that this thing can be done. I am as positive of it as I was of my results when working on the induction motor and the polyphase current. It will be my great work, it will be remembered when all else connected with my life has been forgotten. They thought I was a lunatic in 1896 when I first published a treatise in an electrical review on cosmic rays. Now the scientific journals are full of discussions of cosmic rays and no one calls the authors madmen — they are given Novel prizes, instead.”

Asked how it felt to be so far ahead of his time that he was subject to attacks upon his sanity, Dr. Tesla smiled and said that he had long since ceased to regard it as important.

“I live a life of seclusion,” he said. “The opinion of the world does not affect me. I have placed as the real values in my life what follows after I am dead, although it has been given to me to live to see those things which were once scouted accepted as scientific dogma.

“The thing that recompenses me is that my name shall be known to generations yet unborn for the Tesla coil, the Tesla motor, and now perhaps my name will be connected with the absolutely new source of power I am about to present to the world. It is this thought in which I find my happiness and health. A pioneer does not apply his energies in the way the world is going. Rather he goes against the current. He lets them call him a lunatic. He lets them trample him — if I should ever tell you the inside story of how I had been trampled — but never mind, it was all good for me. I have come through it. I am able to work harder than I worked a year ago. I work now with greater energy and get results more easily than ever before in my life.”

Dr. Tesla's appearance bore out his statement about his health. He is tall, rangy, bony. His regimen at seventy-seven calls for working all day in his laboratory in midtown Manhattan and a daily walk from eight to ten miles in all sorts of weather.

He preferred to talk while walking and lead the way from the Hotel Governor Clinton, where he has his bachelor apartment, up Seventh Avenue amid the hustle of the fur and garment centers. He strode along on his stork-like legs, with the tails of his old-fashioned long coat swinging in the breeze, with a straw hat upon his head and gray gloves in his hand.

In facial appearance he closely resembles Cornelius MacGillicudy, better known as “Connie Mack,” high cheekbones, a long, thin face and the eyes of a man who would pierce the secrets of the material world by power of external as well as internal vision. His hair is not yet entirely gray. The mustache that he once wore has been shaved off — it took much attention, he explained. Later on it became apparent how much this man valued time. “I do not sleep well,” he said. “My mind will not let me. It is going night and day. There is no more tyrannical thing than a mind that is accustomed to thought. It really seems to resent me falling asleep. It pounds for attention until I wake up again.

The tough fiber that is in him he explained entirely on congenital grounds. It is nothing unusual for members of his family to live to be more than 100 years old. His grandfather died at the early age of eighty-six, following a race on horseback in which he outdistanced the youths of his Serbian village. A hernia developed. “You know, in those days and in that wild country, they did not have the skillful doctors who can take you apart and put you together again,” the grandson said.

The distilled results of much living, much thought and communion with the forces of nature found expression as Dr. Tesla dodged in and out of traffic, avoided the hand-trucks of the garment trade, and conducted his peripatetic school.

“I have learned that you cannot break the laws of nature. That is death. Self-preservation is the only rigid law I know of. There is no morality in nature, beyond the necessity of preserving one's self and one's best efficiency. The social contract not to kill others comes under that heading, also. I believe in certain human truths as contained in the Bible but not in revealed religion or in the theologies. There seems to be an irreconcilable difference between science and that sort of religion.

“Then, too, there is a conflict between science and art. By ‘art’ I mean a certain integrated idealism. It is a centripetal something, opposed to the endless centrifugal forces of science. Eventually science will fly apart and fall of its own forces. There is too much for any one man to know. It is no longer possible, as in Bacon's day, for one may to take all knowledge as his province. The seeds of decay and disunion are there as the mass becomes too unwieldy — it works like everything else in nature — attractions set up repulsions, backwards and forwards it goes, now one side winning, now the other side.

Science will win in the present setup of things but it will likely carry civilization down with it when it goes. The art will have to step in, gather up the pieces and carry on. Of course, it is possible that there will be developed scientists who are artists as well. They must realize that this is something dynamic about idealism and apply that dynamism as they would any other force. Then civilization may be able to continue. But I doubt it — forces and counter forces — attractions and repulsions — all say “No.”

As he enters his seventy-eighth year, Dr. Tesla confided that he has three projects which he is working on, on the side, as a sort of relief from concentration on his power idea. One is to produce a type of radio transmission which will permit an individual wave-length for everyone of the 120,000,000 persons in the United States, thus bringing about private radio telephony; second, a discovery which will revolutionize the science of metallurgy; and third, a project to remake the face of society by exposing the inmost thoughts of the human brain through photographing the retina of the eye by invisible rays.

The idea is that all concepts, in the last analysis, are visual and are photographed on the retina while the thought is held. No one could lie or deceive if this invention came into use.

“After all, they have called me a lunatic before,” said Dr. Tesla. “What is one more time?” 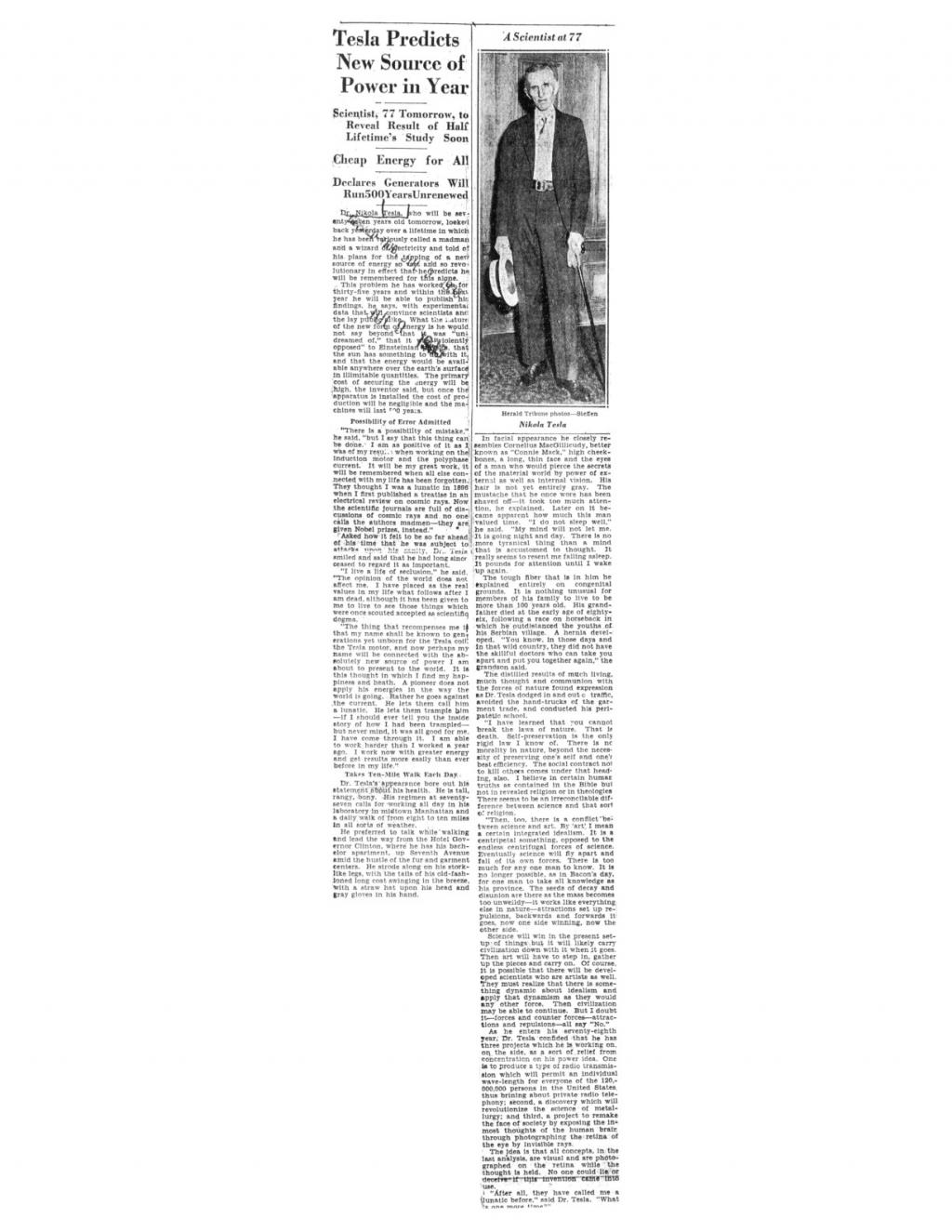