Nikola Tesla's Most Amazing Pierce-Arrow Car Project of 1931 in Buffalo, NY - A Vision of the Future 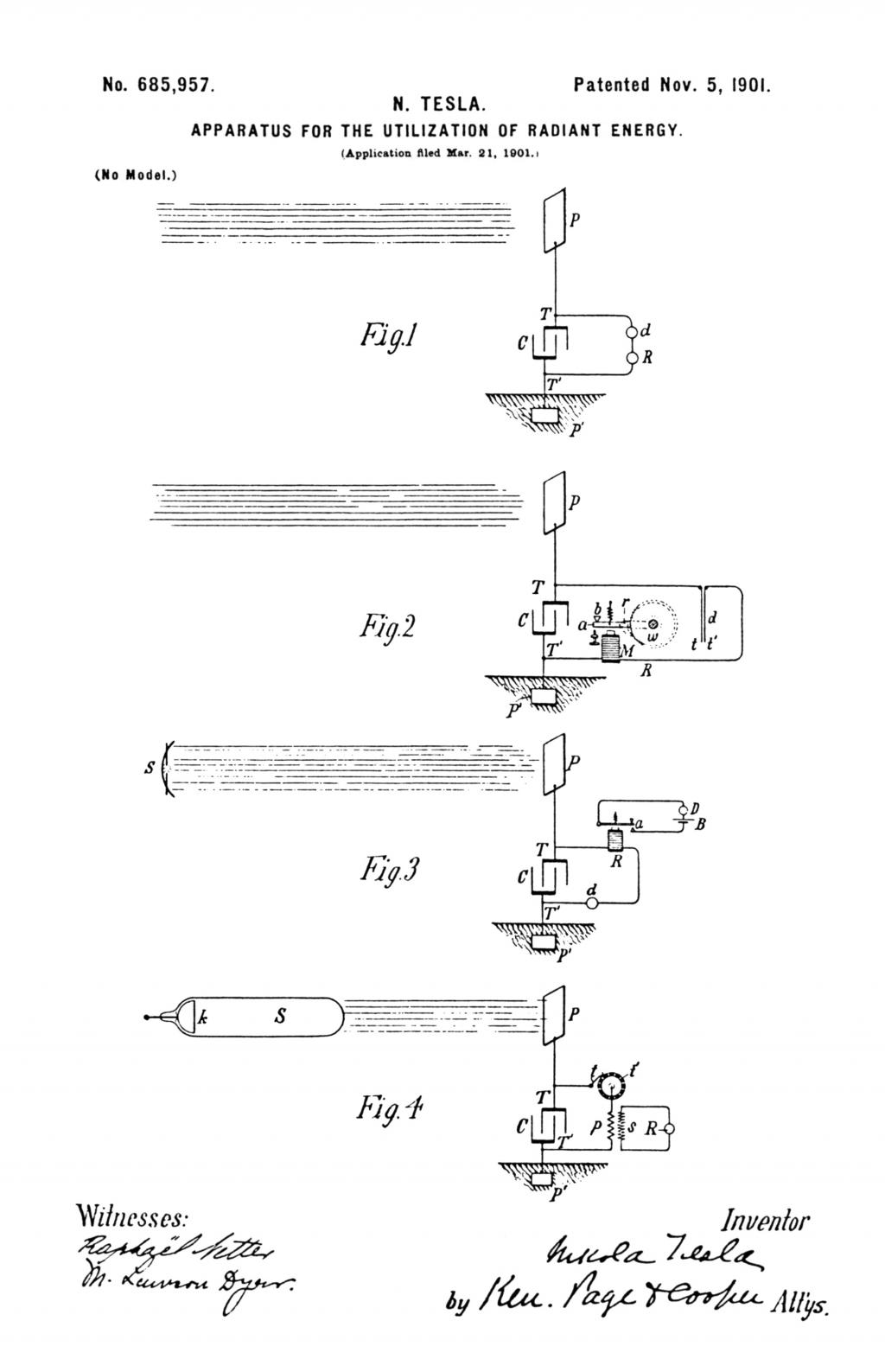 Most researchers generally believe that Nikola Tesla’s best work in new energy was done prior to 1900 with his invention of the AC synchronous motor, and long distance AC transmission lines, which really got our heavy industries moving into the 20th century.

It is not widely known, however, that Tesla’s greatest work was accomplished during the 1901-1931 time frame with the true introduction of space/cosmic conversion on a small home scale. Few observers of Tesla’s work understood its significance.

Tesla went through an extremely bad economic time after the failure of his wireless power transmission tower at Wardenclyffe station, near Shoreham, NY. It is quite apparent that Tesla wished to give the general public the advantages of low cost electric power, while JP Morgan, et al. wanted to control electric power transmission for their own business interests.

It became apparent to Tesla at the turn of the 20th century that “BIG” was not “better” and that small, home-sized and automotive-sized power means were the correct way to go in the electrical power field, for the public at large. Even today we can see the wisdom of the small home-size electrical energy systems, since these can save lives and inconvenience of most homeowners during major storm power outages.

The continuing use of the grid AC power for individual homes has now become a folly beyond reason , in the light of Nikola Tesla’s work, and that of others in the new energy field today.

It is our present opinion, that the 1931 Pierce Arrow work was Tesla’s very best. It was the culmination of well over 25 years of Tesla’s deliberate effort to harness cosmic rays...

Tesla was involved with “radiant energy” in the mid 1890’s and on up to 1897. He made considerable progress and proved the basic value of radiant energy during this specific time frame.

One of the major problems with radiant energy systems was that the spark gap component required to separate the radiant energy from the basic electromagnetic field flow. It was difficult to control and required special components which complicated the overall control aspect of this art. Spark gap electrode erosion was also a problem to deal with, and thus maintenance became a negative factor.

Recognizing the various problem areas in radiant energy, Tesla then turned to working on space/cosmic energy, which is closely related to radiant energy, but can be directly collected and converted into useful electromagnetic fields without the drawbacks associated with radiant energy conversion.

In his two 1901 patents, US Patent 685,957 and US Patent 685,958, Tesla discloses a natural cosmic energy collection method and an artificial one in which vacuum tubes were utilized to produce high voltage electrostatics, plus a small electromagnetic field flow.

From other reference documents related to the car, we extrapolated that in the Pierce Arrow, twelve (12) vacuum tubes were utilized. There were nine (9) tubes of an unspecified type, and three (3) tubes identified as 70L-7GT tubes. A small electromagnetic field flow from the three (3) 70L-7GT vacuum tubes. The integration of the electrostatic with the electromagnetic flow from these two types of vacuum tubes is accomplished within a converter unit as a part of the conversion system.

The special vacuum tubes described in Tesla’s 1901 patents were called “X-ray tubes” which is a misnomer since they were actually electrostatic tubes. They utilize only the positive (+) polarity into an anode terminal which is directly connected to a hemispherical aluminum emitter within one end of the tube. An electrostatic beam is emitted from the opposite end of the tube.

We should recall that electrostatic electricity is also called frictional electricity, and this is how the high voltage is transferred to the “E” flow along the tubes’ inner surface of each of the nine (9) tubes.

This is the key principle used to power the Tesla Pierce-Arrow Car so that the electrostatic flow is joined with the electromagnetic flow from the remaining three (3) 70L-7GL tubes to produce about 60KW (80HP) for the car’s drive motor.

It must be noted that the electrostatic flow is only a positive (+) polarity, with the separate negative (-) polarity cable ground to the car’s chassis to complete the circuitry.

The electromagnetic output from the three (3) 70L-7GT tubes is by conductor wires to each of the nine (9) collector cones, adjacent to the nine (9) electrostatic tubes as noted above. When the two flows (electrostatic and electromagnetic) are joined within the converter unit, an Oersted magnetic flux spiral is produced (at about 60KW) to power the Pierce Arrow’s drive motor.

There has been some question about whether the Pierce Arrow’s drive motor was AC or DC due to some missing data in the released data. There is now a growing belief that the drive motor was AC, since DC motors of this rating tend to be too large and heavy.

There is also some evidence to indicate the presence of a resonant component within the power system, plus the original specifications in Tesla’s 1901 patents. Some researchers believe that tuning forks were located within the two pushrods (starting slide switch) on the dashboard. While this feature is a possibility, there is also the possibility of a crystal oscillator elsewhere within the console that could provide this AC frequency function.

A clear connection has been made between the radiant energy work of Nikola Tesla with the later (1973-75) work of Edwin Gray. It now appears evident that EV Gray knew a lot more about the Tesla Pierce Arrow car demonstration in Buffalo NY in 1931 than any of us involved in this new radiant energy area!

The similarities between the two radiant energy project specifications and detail are most remarkable.

The key design point for Tesla’s car system was that his power rating of 60KVA equates to 80HP so that all of his design specifications match the full power rating for his car. How then, did EV Gray come close to achieving his 80HP rating?

We now know that he did this with a specially designed electric motor as the major innovation for EV Gray power system! There is no longer much speculation about this Gray design reality, because Norm Wootan of Texas, had in his possession motor #4 and #5 of Grays prototype motor series.

These EV Gray motors were shown at the KeelyNet meeting in June 2001. (Videotapes of that presentation are available from TeslaTech.) Since then a Canadian inventor has gained possession of them. 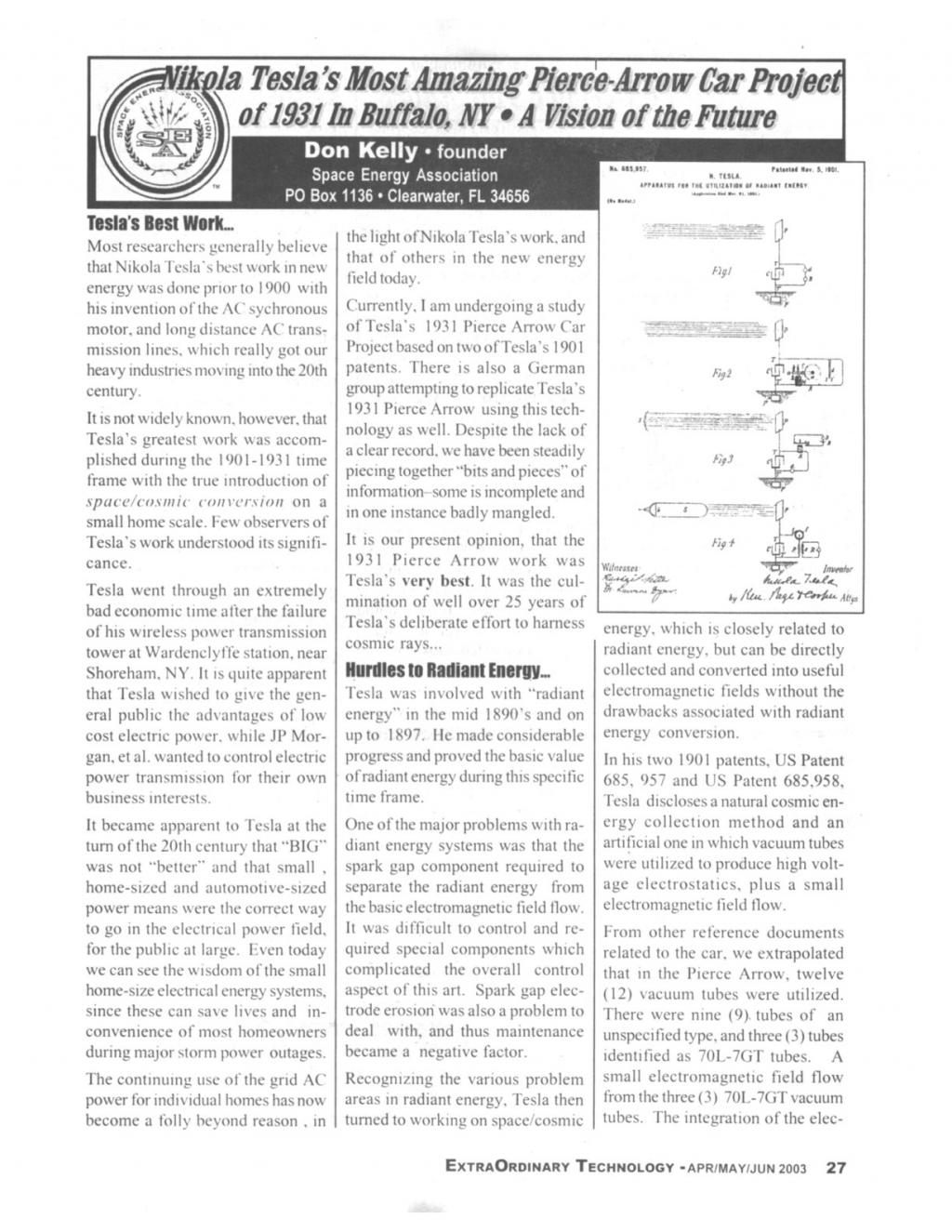