Nikola Tesla, one of the truly great inventors who celebrated his eighty-fourth birthday on July 10, tells the writer that he stands ready to divulge to the United States Government the secret of his “teleforce,” with which, he said, airplane motors would be melted at a distance of 250 miles, so that an invisible Chinese Wall of Defense would be built around the country against any attempted attack by an enemy air force, no matter how large.

This “teleforce,” he said is based on an entirely new principle of physics that “no one has ever dreamed about,” different from the principle embodied in his inventions relating to the transmission of electrical power from a distance, for which he has received a number of basic patents. This new type of force, Mr. Tesla said, would operate through a beam one one-hundred-millionth of a square centimeter in diameter, and could be generated from a special plant that would cost no more than $2,000,000 and would take only about three months to construct.

A dozen such plants, located at strategic points along the coast, according to Mr. Tesla, would be enough to defend the country against all possible aerial attack. The beam would melt any engine, whether Diesel or gasoline driven, and would also ignite the explosives aboard any bomber. No possible defense against it could be devised, he asserts, as the beam would be all-penetrating.

The beam, he states, involves four new inventions, two of which already have been tested. One of these is a method and apparatus for producing rays “and other manifestations of energy” in free air, eliminating the necessity for a high vacuum; a second is a method and process for producing “very great electrical force”; the third is a method for amplifying this force, and the fourth is a new method for producing “a tremendous electrical repelling force.” This would be the projector, or gun, of the system. The voltage for propelling the beam to its objective, according to the inventor, will attain a potential of 50,000,000 volts.

With this enormous voltage, he said, microscopic electrical particles of matter will be catapulted on their mission of defensive destruction. He has been working on this invention, he added, for many years and has recently made a number of improvements in it.

Mr. Tesla makes one important stipulation. Should the government decide to take up his offer he would go to work at once, but they would have to trust him. He would suffer “no interference from experts.”

In ordinary times such a condition would very likely interpose an insuperable obstacle. But times being what they are, and with the nation getting ready to spend billions for national defense, at the same time taking in consideration the reputation of Mr. Tesla as an inventor who always was many years ahead of his time, the question arises whether it may not be advisable to take Mr. Tesla at his word and commission him to go ahead with the construction of his teleforce plant.

Such a Device “Invaluable”

After all, $2,000,000 would be relatively a very small sum compared with what is at stake. If Mr. Tesla really fulfills his promise the result achieved would be truly staggering. Not only would it save billions now planned for air defense, by making the country impregnable against any air attack, but it would also save many more billions in property that would otherwise be surely destroyed no matter how strong the defenses are as witness current events in England.

Take, for example, the Panama Canal. No matter how strong the defenses, a suicide squadron of dive bombers, according to some experts, might succeed in getting through and cause such damage that would make the Canal unusable, in which case our Navy might find itself bottled up.

Considering the probabilities in the case even if the chances were 100,000 to 1 against Mr. Tesla the odds would still be largely in favor of taking a chance on spending $2,000,000. In the opinion of the writer, who has known Mr. Tesla for many years and can testify that he still retains full intellectual vigor, the authorities in charge of building the national defense should at once look into the matter. The sum is insignificant compared with the magnitude of the stake. 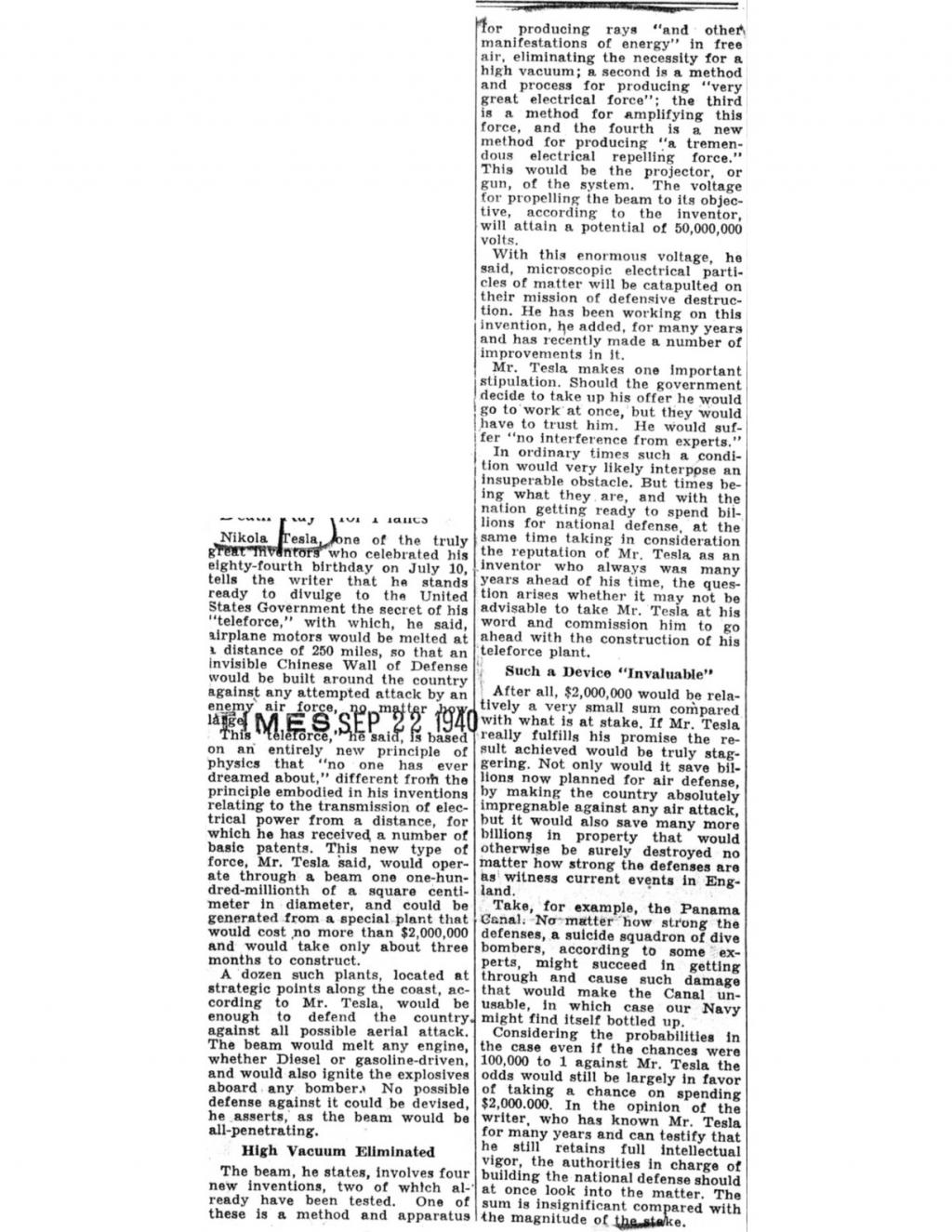