He Insisted the Intention Could Annihilate an Army of 1,000,000 at Once

Nikola Tesla, one of the word's greatest electrical inventors and designers, was found dead last night in his suite at the Hotel New Yorker.

Engineers credit him with having devised the first practical application of alternating current; with the invention of the induction motor, and the invention and development of dynamos, transformers, condensers and specialized coils. The principle of the rotary magnetic field embodied in the plants which transmit power from Niagara Falls — in fact the bases of modern hydroelectric power — are credited to Dr. Tesla.

According to hotel staff, Dr. Tesla, who was 86 years old, had been failing in health for two years. Of vigorous temperament and with emphatic ideas on personal health as well as engineering, he had few visitors, according to the hotel management, which reported that his meals, strictly vegetarian-style were especially prepared for him by the chef.

“He made everybody keep at a distance greater than three feet,” a hotel executive recalled.

A spokesman for the hotel said that Dr. Tesla died as he had spent the last years of his life — alone. He was found dead in bed by a floor maid at 10:45 P.M. She called a house physician, who pronounced him dead.

Ideas Fantastic Toward the End

Nikola Tesla's ideas bordered increasingly on what some considered the fantastic as he advanced in years. On his seventy-eighth birthday he announced in an interview that he had invented a “death beam” powerful enough to destroy 10,000 airplanes at a distance of 250 miles and annihilate an army of 1,000,000 soldiers instantaneously.

On his eighty-fourth birthday he declared he stood ready to divulge to the United States Government the secret of his “death beam” that, he said, would build an invisible Chinese Wall of defense around the country against any attempted attack by an enemy air force, no matter how large.

“All my inventions,” Dr. Tesla said, “are at the service of the United States Government.”

The “death beam,” he added, is “based on an entirely new principle of physics that no one has ever dreamed about.” It would be only one one-hundred-millionth of a square centimeter in diameter, he said, and could be generated from a special plant that would cost no more than $2,000,000 and would take only three months to construct.

A Defense Against Invasion

A dozen such plants, located at strategic positions along the coast, Dr. Tesla said, would be enough to defend the country against all possible aerial attack. The beam would melt any engine whether diesel or gasoline-driven, and would also ignite the explosives aboard. No possible defense against it could be devised, as it would be all-penetrating, he declared.

Should the government decide to take up his offer, Dr. Tesla stated, he would go to work at ounce and keep on working “until I collapsed.” However, he added, “I would have to insist on one condition — I would not suffer interference from any experts. They would have to trust me.”

The beam, he said, involved four new inventions. One consisted of a method and apparatus for reducing rays and other manifestations of energy in free air, eliminating the necessity for a high vacuum; a second was a method and process for producing “very great electrical force”; the third was a method for amplifying this force, and the fourth, a new method for producing “a tremendous electrical repelling force.” This would be the projector, or gun, of the system. The voltage for propelling the “death-beam” to its objective, Dr. Tesla said, would attain a potential of 50,000,000 volts.

Dr. Tesla said he was convinced “that the battleship was doomed” and that “what happened to the armored knight will also happen to the armored vessel.” For this reason, he believed that money spent on battleships would be wasted and such funds “should be directed in channels that will improve the welfare of the country.”

Since he made his first practical invention — a telephone repeater — in 1881, while living in Budapest, Dr. Tesla claimed to have made about 700. Many of them were of great importance, but there were nearly all invented in the last twenty years of the past century.

Not Practical in Business.

He was greatly handicapped by lack of funds, for he was anything but a practical man as far as business was concerned. It was said that he was frequently victimized, but he did not seem to worry as long as he had a place to work.

Tesla probably could have become a rich man had he chosen to become an employe of a large industrial concern, but he preferred poverty and freedom. Early in 1887 he had formed the Tesla Electric Company of New York, but the concern was not a financial success. For many years he did not even have a laboratory to work in, conducting his experiments in hotel rooms.

As early as 1908 Tesla made it known that he was experimenting with interplanetary communication. He firmly believed that most of the planets are inhabited and that messages could be sent between the earth and Mars, Jupiter and Venus.

He also had visions of harnessing the sun's rays and of utilizing the energy of the sea.

Nikola Tesla was born at Smiljan, Lika, a border country of Austria-Hungary, on July 10, 1856. His father was a Greek clergyman and orator, and his mother, Georgina Mandic, was an inventor.

His education began with one year in elementary school and then four years of the lower Realschule at Gospic, Lika. Then he went to a higher school at Carlstadt, Croatia, being graduated in 1873. He studied for four years at the Polytechnic School at Gratz, devoting most of his time to mathematics, physics and mechanics, and then had two years at the University of Prague, where he studied philosophy.

In 1881 he went to Paris, where he worked as an electrical engineer, and the following year he went to Strassbourg, where he installed a mechanical plant. He was attracted to America by the remarkable progress in electrical energy, and came to this country in 1884.

For some time he worked with Thomas A. Edison at West Orange, N. J., chiefly designing motors and generators. In a short while a proposal was made to him to start his own company. He accepted the terms and began by working up a practical system of arc lighting, as well as a potential method of dynamo regulation, which became known as the “third-brush regulation.”

He also devised a thermomagnetic motor and other kindred devices. Soon after the Tesla Electric Company had been forced Dr. Tesla produced his epoch-making motors for alternating current, in which, going back to earlier ideas, he evolved machines having neither commutator nor brushes. This important invention came in 1888. His system of electrical conversion and distribution by oscillatory discharges was devised the following year, and in 1891 the now famous Tesla coil, or transformer, was invented.

Dr. Tesla devised a system of wireless transmission of intelligence in 1893, and this was followed by mechanical oscillators and generators of electrical oscillations.

From 1896 to 1898 Tesla made researches and discoveries in radiations, material streams and emanations.

Dr. Tesla received the Elliott Cresson gold medal in 1893 in recognition of his original work first presented before the Franklin Institute and the National Electric Light Association.

In November, 1931, he published designs of two power plants, one to utilize the heat below the surface of the earth, the other to take advantage of the difference between the upper and lower levels of the ocean.

Shy of manner and ascetic in his tastes, Dr. Tesla preferred his workshop to society. He was not married. He ate sparingly and drank neither coffee nor tea because be considered those beverages to be highly injurious. On the other hand, he regarded alcohol in moderation as virtually an elixir of life.

At one time Tesla had the financial backing of the late J. Pierpont Morgan. He built a tall steel tower on Long Island to send out wireless power, but when his backer died no more money was forthcoming and the plan had to be abandoned.

Dr. Tesla once owned a laboratory on Houston Street, New York, but it burned down and he never had another. 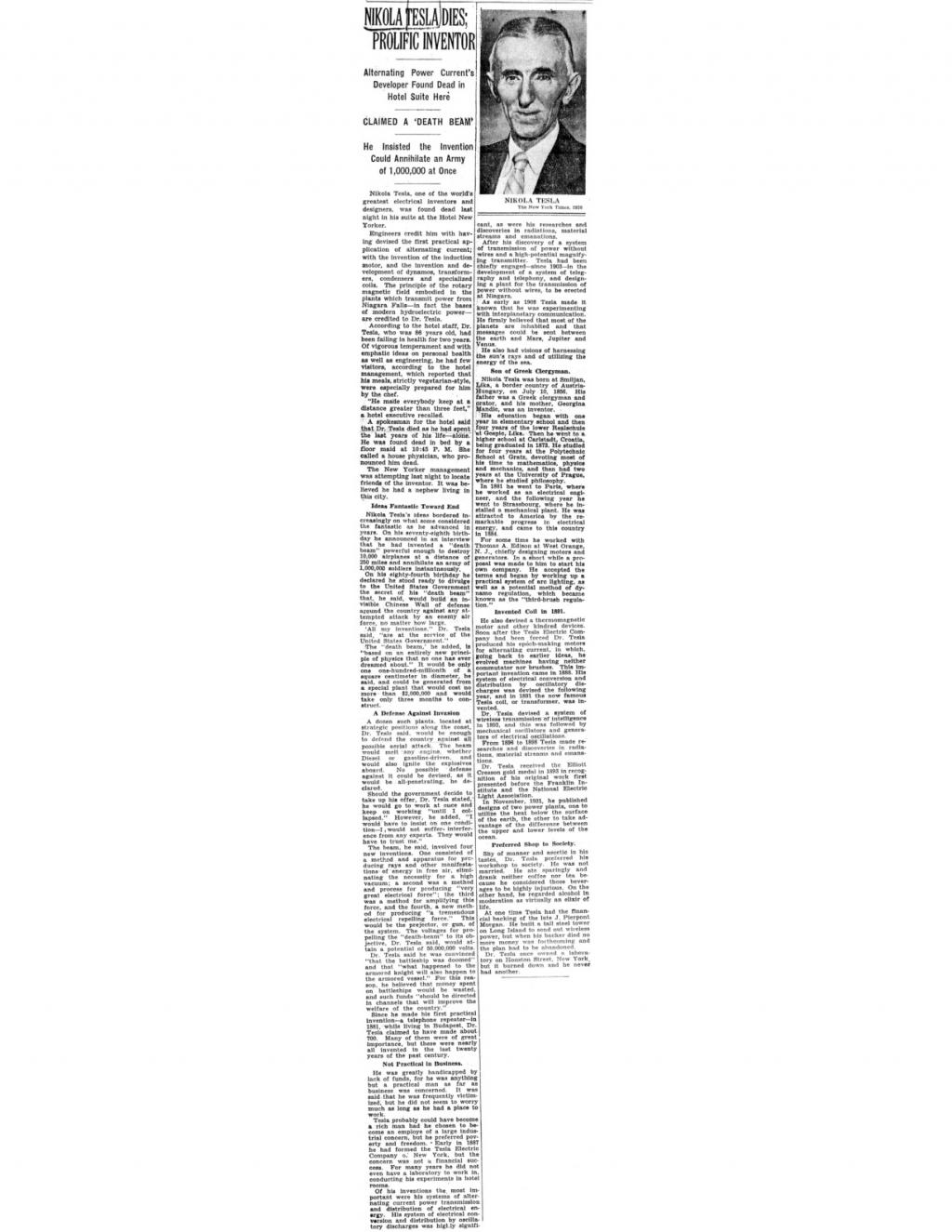