They Smiled at Tesla's Radio Vision

Recalling What the Great Scientist Had Prophesied Many Years Ago.

It is not necessary to explore the map to realize that the desolate spot on the far and frozen Anadyr River where Mattern was forced down is indeed remote. For it was beyond the utmost reaches of the radio. Reliance upon that encircling service was considered worldwide, which practically it is.

But it was the misfortune or distinction of the youthful and intrepid Texan who rides clouds instead of cattle to come to earth in a No Man's Land of emptiness and ice beyond the regions of the radio Now and then, but not while the stranded airman was there, nomads pass through, tending their reindeer herds.

When the ice broke on the Anadyr a Soviet river patrol ascended that stream and brought back to a grateful world the tidings that the lone airman was alive and well. Forthwith the radio resumed the interrupted saga.

We who get much of the important world news and some of the pictures of its great happenings by radio forget how recently perfected the service without wires is.

Before wireless telegraphy, under the magical touch of Marconi, became a commercial reality, Nikola Tesla, still living, was conducting experiments in this field in his laboratory in New York. A pioneer and prophet, more of whose predictions have come to pass, Tesla was looked upon by many as a visionary, a sort of modern alchemist.

A newspaperman managed to get a substantial interview with this laboratory explorer. The substance of the inventor's talk was that from tall masts along the coast messages without the use or need of wires would be sent to ships at sea, and even across oceans, as well as continents; that sinking vessels would radio their distress and other ships, receiving these calls giving latitude and longitude, would rush to the rescue.

It was, Tesla forecast, an achievement just in the offing, a first step in the ultimate amalgamation of the affairs of mankind — a whispered protocol preparing the parliament of man.

Although a bit optimistic in radio's ethical effect upon nations and races, the inventor's laboratory demonstrations convinced the usually incredulous reporter that the cosmic lanes might indeed soon be used by coming man to flash his thoughts around the earth.

Hurrying to his typewriter, the reporter prepared what he considered a knock-out feature, and took it to a Sunday editor. The man in charge there was a writer who subsequently won fame and fortune with two “best sellers” and other books. Editor and reporter were acquainted. The reception was cordial enough, but the editor said:

“This paper has the reputation of being a yellow journal, a reputation it is trying to live down. We could not afford to print such a piece of inventive lunacy.”

Another paper, however, with perhaps fewer scruples then and with little reputation in that early day at stake, accepted and published the “sensational” interview, even adding what was considered then abnormal illustrations to the Tesla dream. It was treated as a semicomic prophecy.

When it is realized that the rejection of the prediction regarding the possible coming of wireless and then its publication in a rival sheet in a spirit of cachination and cartoon were episodes in the careers of men still active in New York (possibly vetoing or caricaturing some newer thing), the pace is apparent at least in man's means of communication.

Now when, as in Mattern's case, a flyer manages to stray beyond radio's far frontier, the nations, forgetting all else save the fate (or folly) of a brave spirit, man their ships and air craft in his search. Whatever his solo flight accomplishes, it has been no mean achievement to stray beyond the utmost call of the radio. 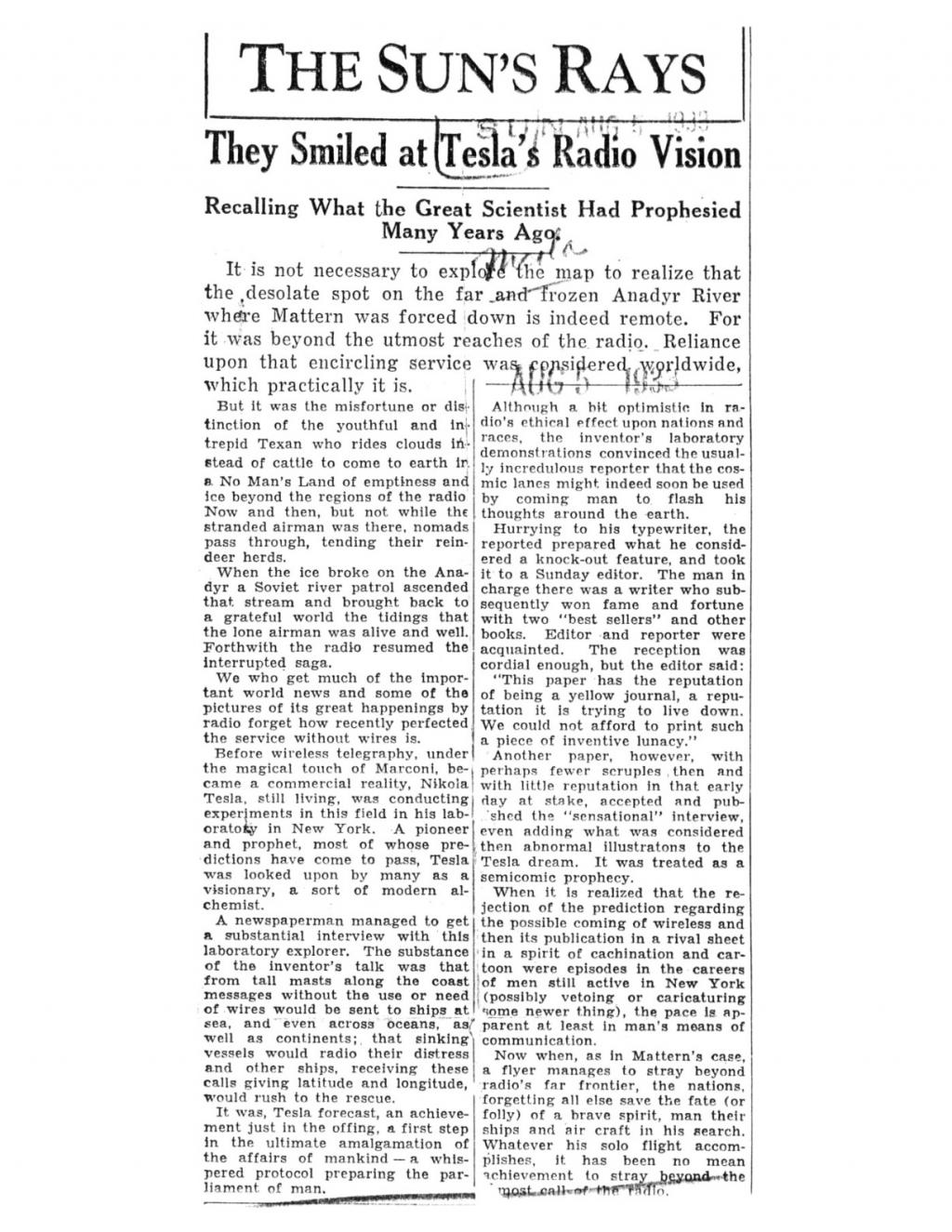