Shoreham — In the end, Nikola Tesla kept his mystery.

The Croatian-born scientist — whose pioneering work led directly to the development of electric motors — spent several years here in the early 1900s, building a 200-foot-high tower and reportedly digging a deep tunnel or network of tunnels whose use never has been clearly understood.

Tesla died in poverty in 1943 at the age of 87. Although he invented the induction motor and developed a system of wireless transmission of electricity, many of his records have vanished, including most records of his work on Long Island.

About two months ago, a volunteer fireman stumbled across a dome made of bricks in the ground near the Rocky Point Fire Department substation, which local historians suspected might have been an entrance to Tesla's tunnel. It was in a wooded field, a few hundred yards from where the base of Tesla's tower had been. It was filled to within a foot or so of the top and covered with wood.

The fire department asked Brookhaven Town Highway Superintendent Harold Malkmes to fill in the hole as a safety measure. But in an effort to find out what it was, Malkmes first had a crane dig alongside the structure Wednesday and yesterday to see where it led. The dome, he learned, is the top of an 8-foot-deep shaft lined with bricks. It has a stone floor. The only thing found in the shaft was the skeleton of a dog.

Besides failing to solve the mystery of the tunnel, Malkmes encountered another difficulty as his crews dug. Ellice Gonzalez of the Suffolk County Archeological Association protested the digging yesterday, saying it might destroy any archeological value the area might have. She suggested the fire department ascertain the potential value before digging further. But the digging continued.

A Newsday story about the discovery of the object brought memories to Edwin J. Binney, 76, of west Babylon, who said he and some friends had explored an old Tesla tunnel around 1920, shortly before it was filled in. He is not sure, however, whether it was the one found by the fireman.

Binney said he and some friends had heard of Tesla's tunnels and had driven to Shoreham in a Model-T Ford to look at them. They found a deep hole, shored up by rotting timbers. Using a rope, they lowered themselves into the hole to explore it. Binney said they found some pipes at the bottom but did not know what they were used for. Binney has an account of the experience written by a boyhood friend, which says, “I dropped a steel tape down and it showed it was 112 feet deep... We made it in safely but later realized how foolish we had been for the whole interior was ready to collapse.” 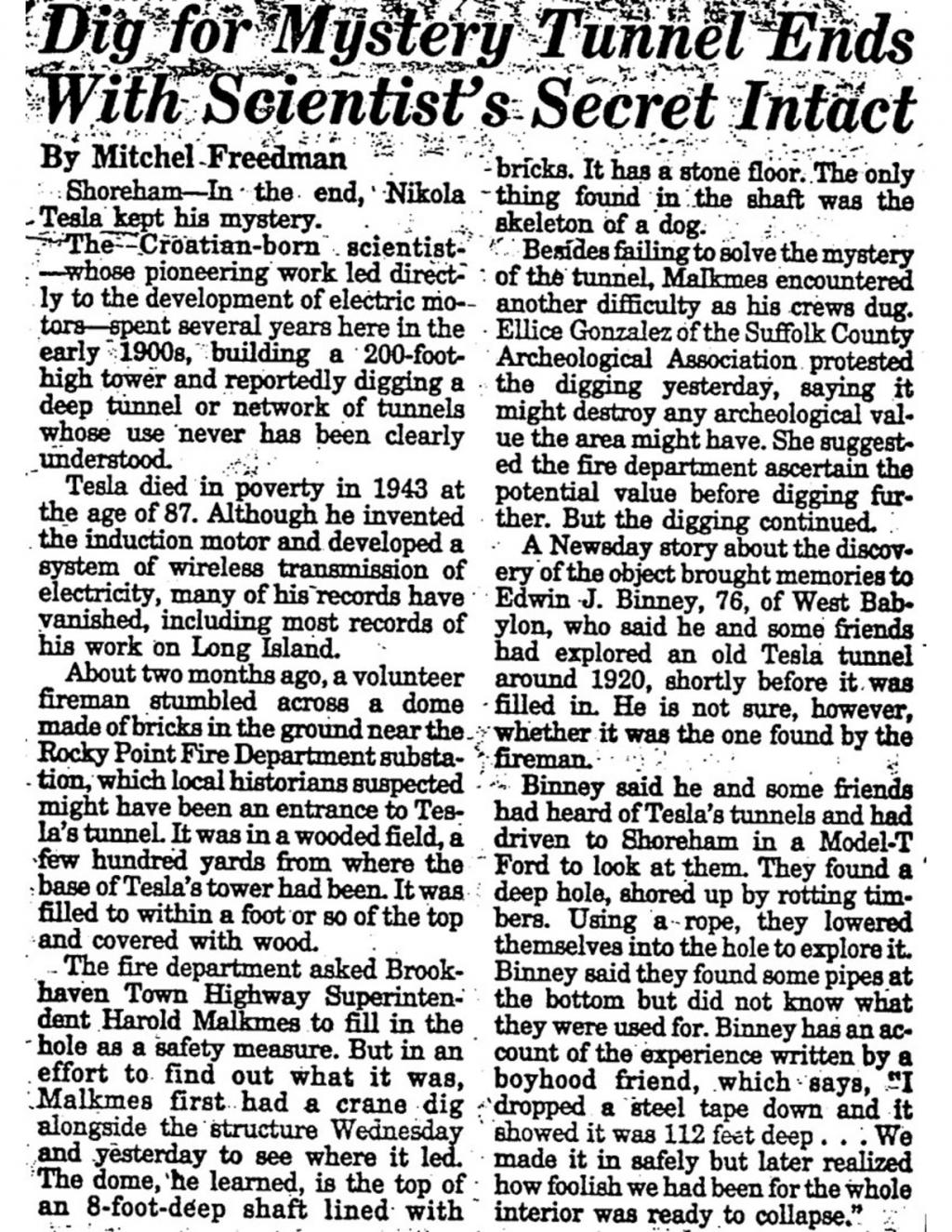