Nikola Tesla, father of radio and of the modern electrical transmission systems, who died Thursday night at the Hotel New Yorker at the age of 86, will receive an official state funeral under the auspices of the Yugoslav Government-in-Exile, it was announced last night by the Yugoslav Information Center.

The service will be held in the Cathedral of St. John the Divine on Tuesday at 4 P. M. Meanwhile, the body will lie in state at the Campbell Funeral Church, Madison Avenue and Eighty-first Street.

Yugoslavia, where Dr. Tesla was born of Serbian parents, will be officially represented by Ambassador Constantin Fotitch and many present and former high officials of that country. Among them will be Dr. Ivan Shubashich, Governor of Croatia; Dr. Bogoljub Jevtich, former Prime Minister of Yugoslavia; Branko Chubrilovich, Yugoslav Minister of Food Supply and Reconstruction; Franc Snoj, Minister of State representing the Slovenes, and Dr. Tesla's nephew, Sava Kosanovitch, president of the Eastern and Central European Planning Board, representing the Yugoslav, Czechoslovak, Polish and Greek Governments.

Dr. Tesla, who held more than 700 basic patents, is regarded as the man who laid the foundations for modern radio broadcasting and television; for the giant electrical transformers and other transmission apparatus, and for the basic apparatus that makes possible neon lights and fluorescent illumination.

To the end of his days Dr. Tesla claimed that the Marconi system of wireless telegraphy was an infringement on his method and apparatus for transmitting energy without wires. Dr. Tesla brought suit against Marconi in an effort to gain legal recognition of his claim. He blamed his failure to establish his patent rights to the paucity of technical knowledge at that time on the difference between wave lengths, particularly between microwaves and short waves. When the distinction finally became clear the original Tesla patents had run out. 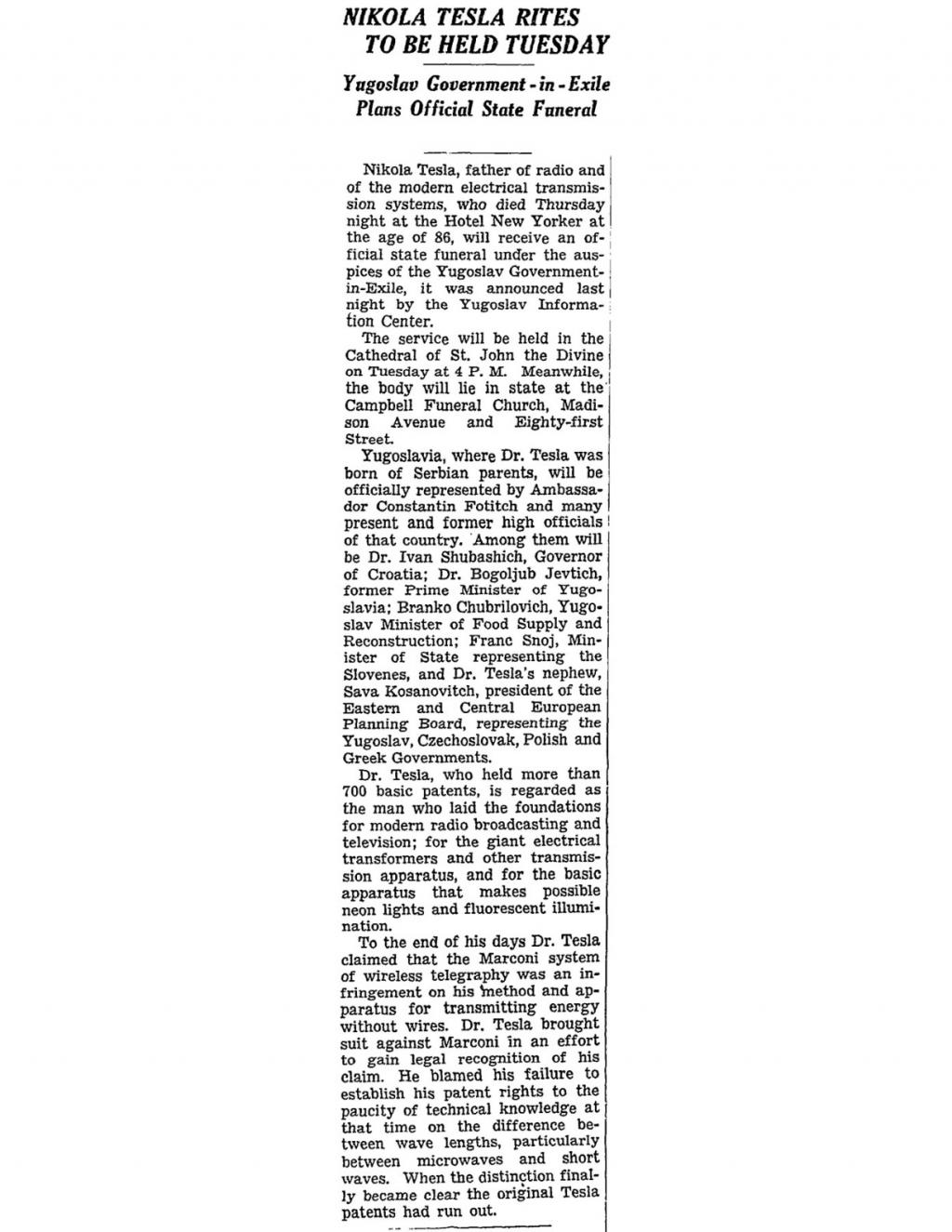