In the realm of electricity and physics few men have striven for such mighty achievements and attained such prominence through the working out of ideas greatly in advance of current thought as has Nikola Tesla, the subject of this sketch.

Nikola Tesla was born at Smiljan, Lika, the border country of Austria-Hungary, in 1857, the son of a Greek clergyman and orator, and Georgina Mandic, who was an inventor, as was her father. Tesla was educated for a year in the elementary schools, for four years at the lower Realschule, Gospic, Lika, and for three years at the higher Realschule, Carlstadt, Croatia, graduating in 1873. He was a student for four years at Polytechnic School, Gratz, in mathematics, physics and mechanics. After this he studied two years in philosophic studies at the University of Prague, Bohemia. He has received the honorary degree of Master of Arts, from Yale, in 1904, and Columbia, N. Y., conferred the degree of LL.D. in 1894.

Nikola Tesla began his practical career at Budapest, Hungary, in 1881, where he made his first electrical invention, a telephone “repeater,” and conceived the idea of his rotating magnetic field. He later engaged in various branches of engineering and manufacture, and, since 1884, has been a resident of the United States, becoming a naturalized citizen. Dr. Tesla is the author of numerous scientific papers and addresses, and his inventions and discoveries cover a wide range. Speaking chronologically, his chief work may be summed up as follows: systems of arc lighting, 1886; Tesla motor and system of alternating-current power transmission, 1888; system of electrical conversion and distribution by oscillating discharges, 1889; generation of high-frequency currents and effects of these, 1890; transmission of energy through a single wire without return, 1891; Tesla coil or transformer. 1891; investigations of high-frequency effects and phenomena, 1891-1893; system of wireless transmission of intelligence, 1893; mechanical oscillators and generators of electrical oscillations, 1894-1895; researches and discoveries in radiations, material streams, and emanations, 1896-1898; high-potential magnifying transmitter, 1897; system of transmission of power without wires. 1897-1905; economic transmission of energy by refrigeration, 1898; art of “Telautomatics,” 1898-1899; burning of atmospheric nitrogen and production of other electrical effects of transcending intensities, 1899-1900; method and apparatus for magnifying feeble effects, 1901-1908; art of individualization, 1902-1903.

Since 1903, Dr. Tesla has been chiefly engaged in the development of his system of world telephony and telegraphy, and the design of a large plant for the transmission of power without wires. He has also devoted a great deal of energy to the development of a perfected system for the electrical production of nitrates from the atmosphere and quite recently announced the development of a remarkable form of turbine, the perfecting of which when realized will mean practically a revolution in our application of mechanical principles. In the current issue of the Electrical Review And Western Electrician Dr. Tesla discusses with characteristic candor and vigor some new ideas with regard to the propagation of electrical impulses through the air without wires. 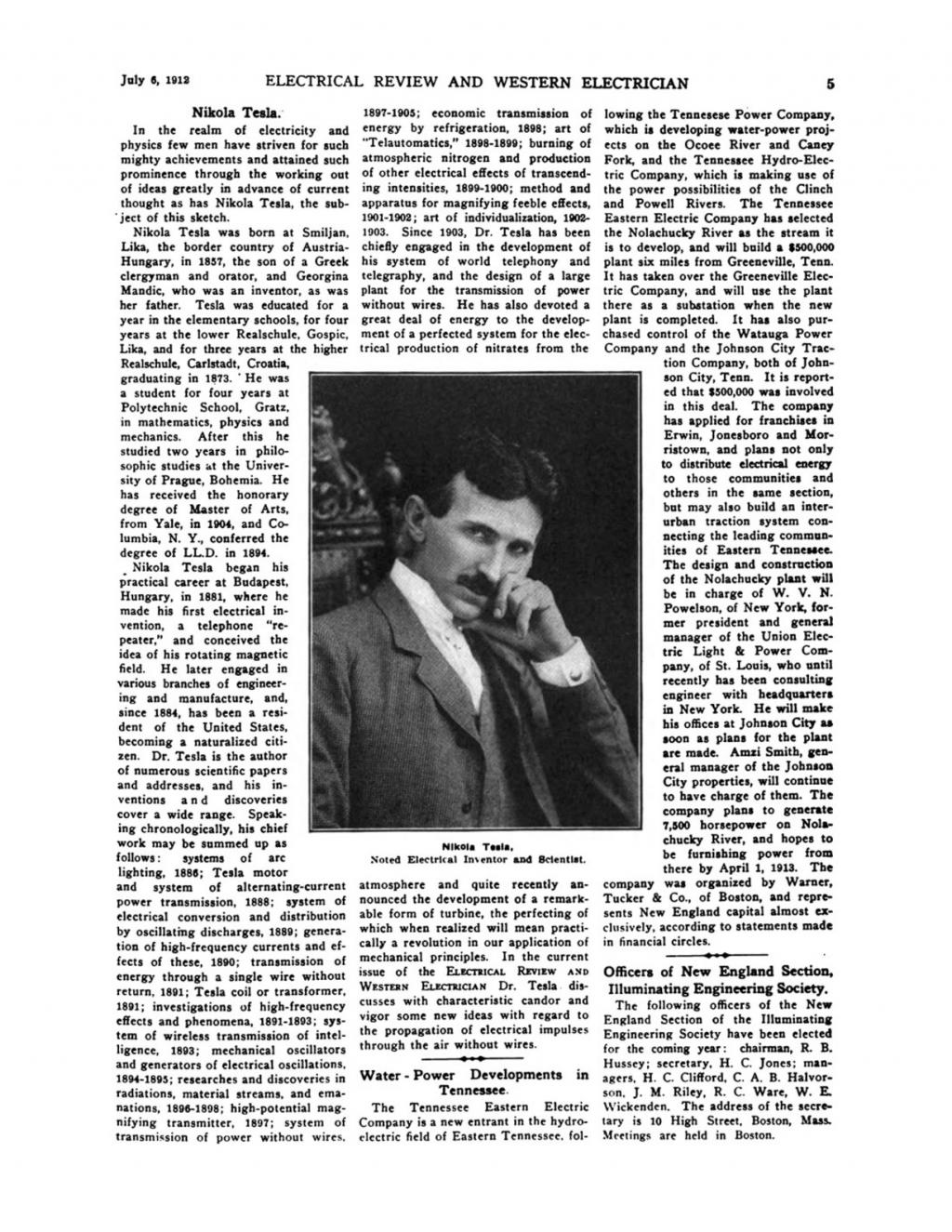