Hanging a Thing of the Past

From The Brooklyn Eagle.

One thing at least is reasonably sure: We shall not go back to the old bungling, barbarous, brutal and uncertain hanging. Execution by electricity is appropriate to the age we live in. It does not make a revolting scene like a hanging. It is accompanied by no noise and disturbance. It is instant in its action and a stout neck or a strong physique does not prolong the death into an agony that must seem to the victim to endure for ages. Nor is the victim usually inspired by the terror and physical fear that overcome him at the sight of weapons or axes or a gallows. We are not for coddling criminals, by any means, but when we put them out of the world we can afford to do it in a rapid and businesslike way. The sentence of the law for murder is death, not torture.

If Electricity Doesn’t Kill, What Does it Do?

From The Boston Herald.

If electricity doesn’t kill, as Nikola Tesla declares, what does it do? When the brain and heart are disrupted, the tissues destroyed by fire, it seems as though artificial respiration. If it were kept up over so long, wouldn’t avail much. . . . Some persons are more susceptible to electricity than others, and perhaps Tesla’s ability to receive a million volts unharmed is no criterion of safety to the average citizen who flops at fifty.

From The Elizabeth (N. J.) Journal.

Mr. Edison has given the following definition of electricity: “It is a mysterious fluid about which nothing is known.” Certainly, if any one could tell what electricity is, Mr. Edison would seem to be the man. But he frankly acknowledges entire ignorance of it. He knows, undoubtedly, a multitude of ways in which it manifests itself, and he has been marvellously successful in utilizing those manifestations. But of the force itself he knows nothing.

Don’t Care to Try It

From The Burlington Free Press.

Thomas A. Edison, the electric inventor, expresses the opinion that electrocution is sure death, and that resuscitation after death from electricity is utterly impossible. So far as we are concerned we are perfectly willing to take Mr. Edison’s word for it. 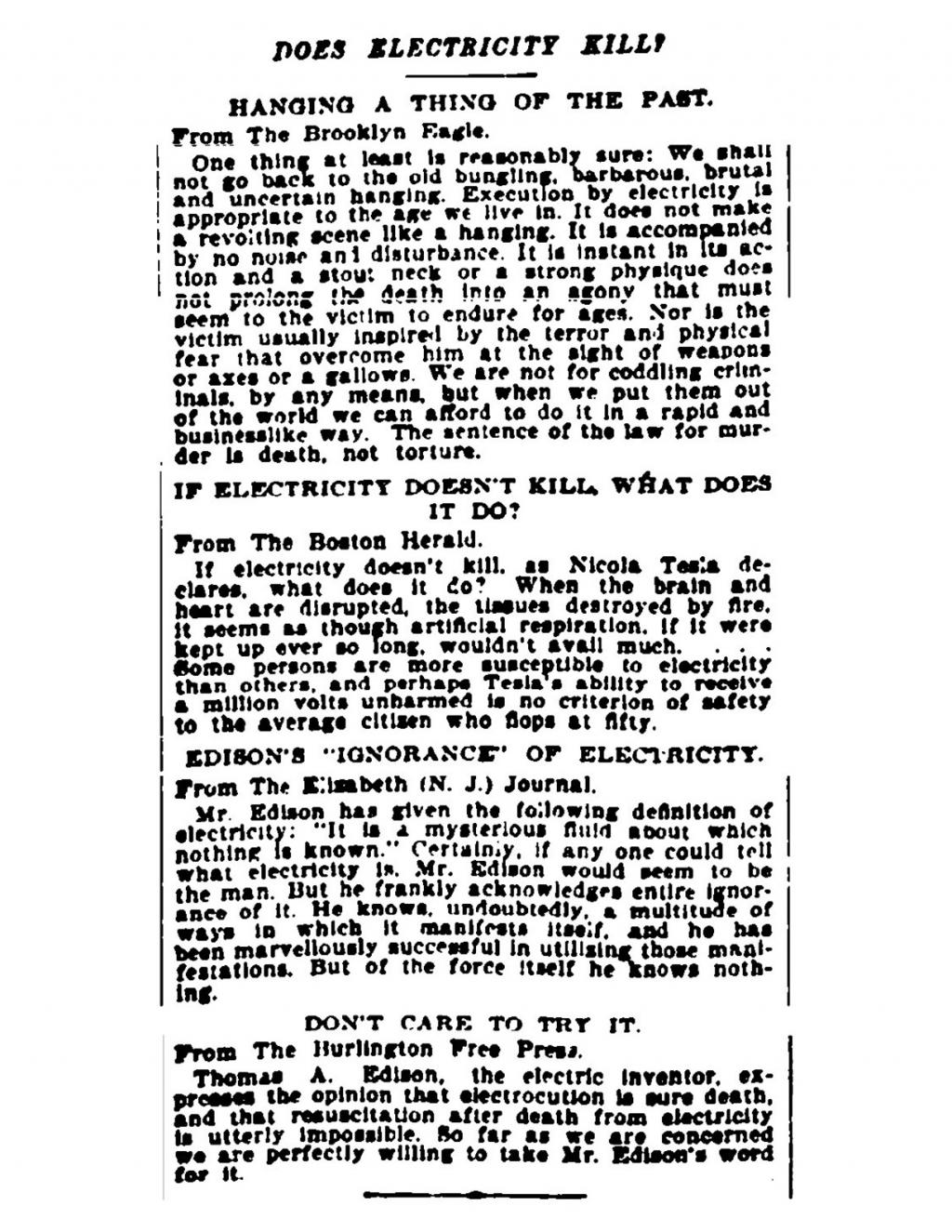