Dr. Tesla Gives Home to an Errant Pigeon That Flew Into 40th-Story Room in Hotel

Early yesterday morning, not so long after it started snowing, an apologetic housekeeper on the fortieth floor of the Hotel New Yorker — one flight from the roof — telephoned down to the office that there was a bird in one of the unoccupied rooms. Apparently it had flown in a window which had been left partially open during the night, she explained.

When the management arrived on the scene the “bird” was perched on the top of a dresser, as unaccountable as Poe's raven, and twice as ambiguous. It was a homing pigeon with a leg band reading: “I. F. 34 N. U. 1286,” and it seemed to have just got in after a long hard flight. It was caught and shut in a bathroom until its legband could be deciphered.

The news of it spread, however. At 7 o'clock, while the management was still trying to face the anomaly of the homing pigeons without a home, a chambermaid was repeating the story to Dr. Nikola Tesla, the 78-year-old scientist, in his thirty-third floor suite. Dr. Tesla, who is fond of pigeons, as the chambermaid knows from experience, promptly called the management and volunteered to take charge of the foundling.

He was afraid it might be sick, instead of merely storm-driven, Dr. Tesla explained, and since he was already keeping one convalescent pigeon in his room, the two of them might be company for each other. The management gratefully assented. After looking over the bird, Dr. Tesla decided that it wasn’t sick but hungry and a little upset by having gorged itself, for want of anything more edible, on snow. He decided to keep it anyway.

Though accustom to walk ten miles daily, Dr. Tesla did not leave his apartment all day yesterday, according to hotel officials. And he is known to have dropped work on a new electrical project he has underway, lest his charge might require some little attention. The man who recently announced the discovery of electrical death-beam, powerful enough to destroy 10,000 airplanes at a swoop, had carefully spread towels on his window ledge and set down a little cup of seed for his two pigeons.

The first pigeon was found in a dying condition ten days ago and is being nursed back to health. The second, after a good feed and rest, will be able to go along home under its own power, Dr. Tesla said. He admitted that he had made a specialty of treating sick pigeons since he was a lad of twelve in his native Croatian village of Smilian. 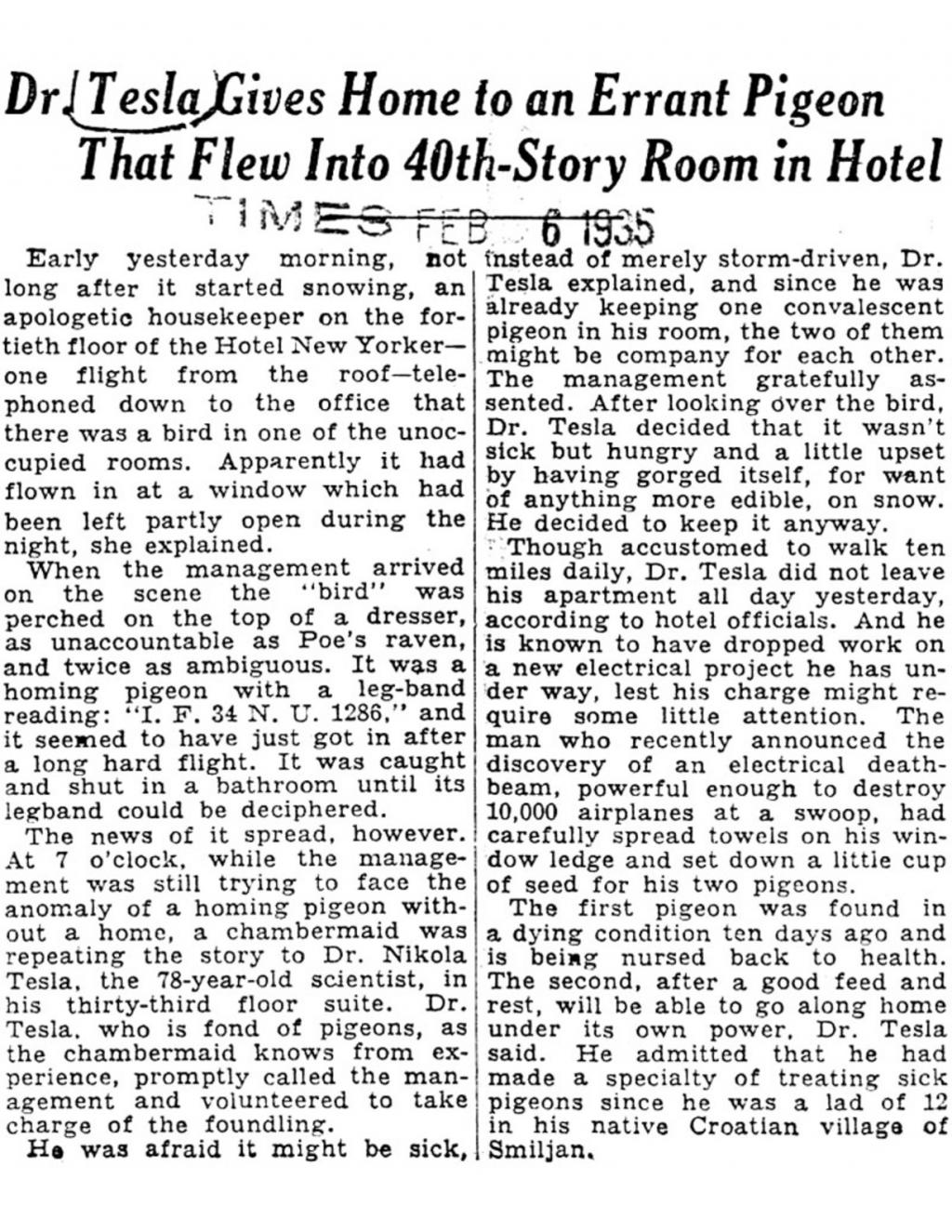