Fifteen or sixteen years ago, when I was pursuing my course at the college, I was told by an eminent physicist that a motor could not be operated without the use of brushes and commutators, or mechanical means of some kind for commutating the current. It was then I determined to solve the problem.

After years of persistent thought I finally arrived at a solution. I worked out the theory to the last detail, and confirmed all of my theoretical conclusions by experiments. Recognizing the value of the invention, I applied myself to the work of perfecting it, and after long continued labor I produced several types of practical motors.

Now all this I did long before anything whatever transpired in the whole scientific literature — as far as it could be ascertained — which would have even pointed at the possibility of obtaining such a result, but quite contrary at a time when scientific and practical men alike considered this result unattainable. In all civilized countries patents have been obtained almost without a single reference to anything which would have in the least degree rendered questionable the novelty of the invention. The first published essay — an account of some laboratory experiments by Prof. Ferraris — was published in Italy six or seven months after the date of filing of my applications for the foundation patents. The date of filing of my patents is thus the first public record of the invention.

No one can say that I have not been free in acknowledging the merit of Prof. Ferraris, and I hope that my statement of facts will not be misinterpreted. Even if Prof. Ferraris’s essay would have anticipated the date of filing of my application, yet, in the opinion of all fair-minded men, I would have been entitled to the credit of having been the first to produce a practical motor; for Prof. Ferraris himself denies in his essay the value of the invention for the transmission of power, and only points out the possibility of using a properly constructed generator, which is the only way of obtaining the required difference of phase without losses; for even with condensers — by means of which it is possible to obtain a quarter phase — there arc considerable losses, the cost of the condensers not considered.

Thus, in the most essential features of the system—the generators with the two or three circuits of differing phase, the three-wire system, the closed coil armature, the motors with direct current in the field, &c. — I would stand alone, even had Prof, Ferraris’s essay been published many years ago.

As regards the most practicable form of two-wire motor, namely, one with a single energizing circuit and induced circuits, of which there are now thousands in use, I likewise stand alone.

Most of these facts, if not all, are perfectly well known in England; yet, according to some papers, one of the leading English electricians docs not hesitate to say that I have worked in the direction indicated by Prof. Ferraris, and in your issue above referenced to it seems I am called an imitator.

Now, I ask you where is that world·known English fairness? I am a pioneer, and I am called an imitator. I am not an imitator. I produce original work or none at all. 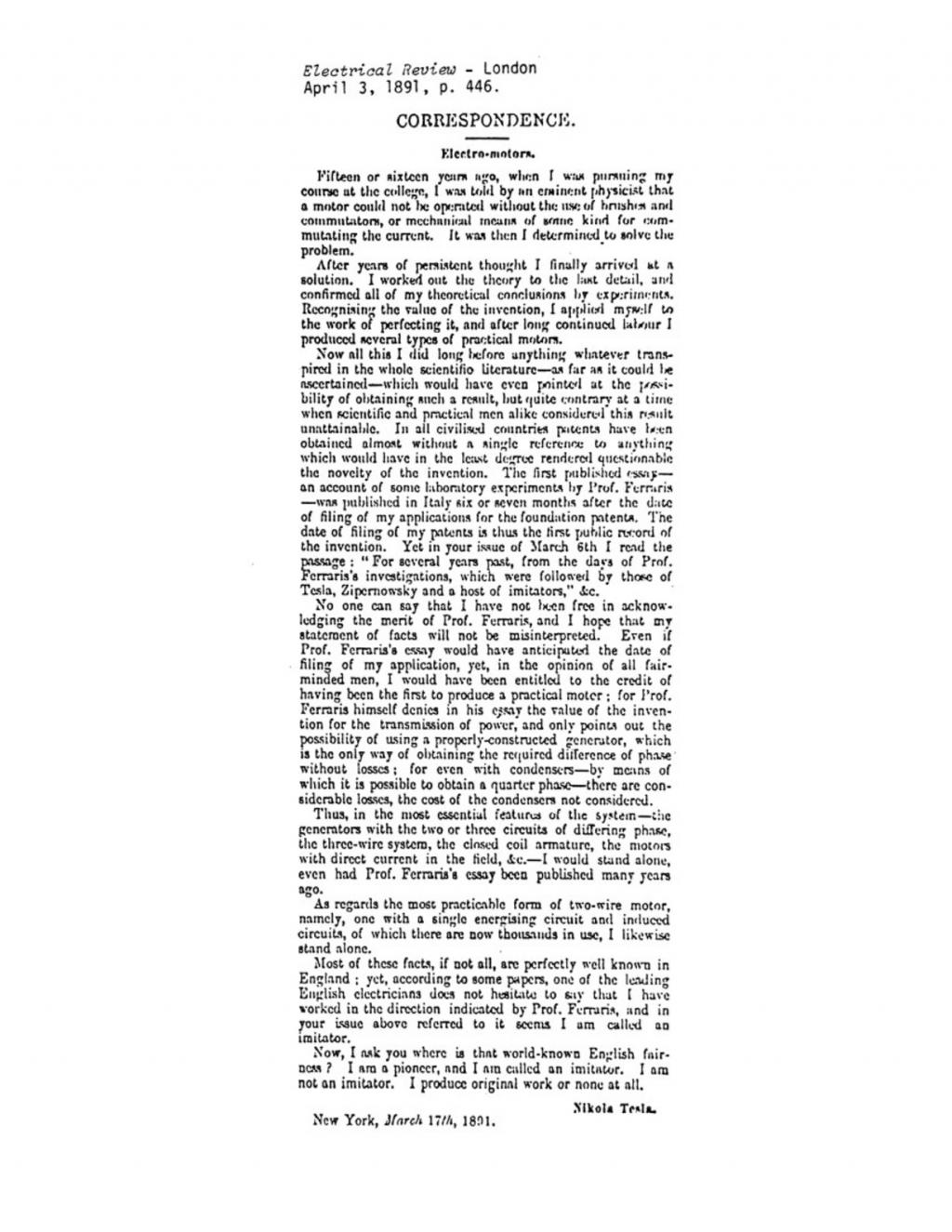