Phenomena of Currents of High Frequency

I cannot pass without comment the note of Prof. Thomson in your issue of April 1, although I dislike very much to engage in a prolonged controversy. I would gladly let Prof. Thomson have the last word, were it not that some of his statements render a reply from me necessary.

I did not mean to imply that, whatever work Prof. Thomson has done in alternating currents of very high frequency, he had done subsequent to his letter published in the Electrician. I thought it possible, and even probable, that he had made his experiments some time before, and my statement in regard to this was meant in this general way. It is more than probable that quite a number of experimenters have built such machines and observed effects similar to those described by Prof. Thomson. It is doubtful, however, whether, in the absence of any publication on this subject, the luminous phenomena described by me have been observed by others, the more so, as very few would be likely to go to the trouble I did, and I would myself not have done so had I not had beforehand the firm conviction, gained from the study of the works of the most advanced thinkers, that I would obtain the results sought for. Now, that I have indicated the direction, many will probably follow, and for this very purpose I have shown some of the results I have reached.

Prof. Thomson states decisively in regard to experiments with the incandescent lamp bulb and the filament mounted on a single wire, that he cannot agree with me at all that conduction through the glass has anything to do with the phenomenon observed. He mentions the well-known fact that an incandescent lamp acts as a Leyden jar and says that “if conduction through the glass were a possibility this action could not occur.” I think I may confidently assert that very few electricians will share this view. For the possibility of the condenser effect taking place it is only necessary that the rate at which the charges can equalize through the glass by conduction should be somewhat below the rate at which they are stored.

Prof. Thomson seems to think that conduction through the glass is an impossibility. Has he then never measured insulation resistance, and has he then not measured it by means of a conduction current? Does he think that there is such a thing as a perfect non-conductor among the bodies we are able to perceive? Does he not think that as regards conductivity there can be question only of degree? If glass were a perfect non-conductor, how could we account for the leakage of a glass condenser when subjected to steady differences of potential?

While not directly connected with the present controversy, I would here point out that there exists a popular error in regard to the properties of dielectric bodies. Many electricians frequently confound the theoretical dielectric of Maxwell with the dielectric bodies in use. They do not stop to think that the only perfect dielectric is ether, and that all other bodies, the existence of which is known to us, must be conductors, judging from their physical properties.

My statement that conduction is concerned to some, although perhaps negligible, extent in the experiment above described was, however, made not only on account of the fact that all bodies conduct more or less, but principally on account of the heating of the glass during the experiment. Prof. Thomson seems to overlook the fact that the insulating power of glass diminishes enormously with the increase in temperature, so much so, that melted glass is comparatively an excellent conductor. I have, moreover, stated in my first reply to Prof. Thomson in your issue of March 18, that the same experiment can be performed by means of an unvarying difference of potential. In this case it must be assumed that some such process as conduction through the glass takes place, and all the more as it is possible to show by experiment, that with a sufficiently high steady difference of potential, enough current can be passed through the glass of a condenser with mercury coating to light up a Geissler tube joined in series with the condenser. When the potential is alternating, the condenser action comes in and conduction becomes insignificant, and the more so, the greater the rate of alternation or change per unit of time. Nevertheless, in my opinion, conduction must always exist, especially if the glass is hot, though it may be negligible with very high frequencies.

Prof. Thomson further states, in reply to some of my views expressed in regard to the constant current machines that five or six years ago it occurred to him to try the construction of a dynamo for constant current, in which “the armature coils were of a highly efficient type, that is, of comparatively short wire length for the voltage and moving in a dense magnetic field.” Exteriorly to the coils and to the field he had placed in the circuit of each coil an impedance coil which consisted of an iron core wound with a considerable length of wire and connected directly in circuit with the armature coil. He thus obtained, he thought, “the property of considerable self-induction along with efficient current generation.” Prof. Thomson says he expected “that possibly the effects would be very much the same as those obtainable from the regularly constructed apparatus.” But he was disappointed, he adds. With all the consideration due to Prof. Thomson, I would say that, to expect a good result from such a combination, was rather sanguine. Earth is not farther from Heaven than this arrangement is from one, in which there would be a length of wire, sufficient to give the same self-induction, wound on the armature and utilized to produce useful E.M.F., instead of doing just the opposite, let alone the loss in the iron cores. But it is, of course, only fair to remember that this experiment was performed five or six years ago, when even the foremost electricians lacked the necessary information in these and other matters.

Prof. Thomson seems to think that self-induction wipes out the periodical undulations of current. Now self-induction does not produce any such effect, but, if anything, it renders the undulation more pronounced. This is self-evident. Let us insert a self-induction coil in a circuit traversed by an undulating current and see what happens. During the period of the greatest rate of change, when the current has a small value, the self-induction opposes more than during the time of the small rate of change when the current is at, or near, its maximum value. The consequence is, that with the same frequency the maximum value of the current becomes the greater, the greater the self-induction. As the sound in a telephone depends only on the maximum value, it is clear that self-induction is the very thing required in a telephone circuit. The larger the self-induction, the louder and clearer the speech, provided the same current is passed through the circuit. I have had ample opportunity to study this subject during my telephone experience of several years. As regard the fact that a self-induction coil in series with a telephone diminishes the loudness of the sound, Prof. Thomson seems to overlook the fact that this effect is wholly due to the impedance of the coil, i.e., to its property of diminishing the current strength. But while the current strength is diminished the undulation is rendered only more pronounced. Obviously, when comparisons are made they must be made with the same current.

In an arc machine, such as that of Prof. Thomson’s, the effect is different. There, one has to deal with a make and break. There are then two induced currents, one in the opposite, the other in the same direction with the main current. If the function of the mechanism be the same whether a self-induction coil be present or not, the undulations could not possibly be wiped out. But Prof. Thomson seems, likewise, to forget that the effect is wholly due to the defect of the commutator; namely, the induced current of the break, which is of the same direction with the main current and of great intensity, when large self-induction is present, simply bridges the adjacent commutator segments, or, if not entirely so, at least shortens the interval during which the circuit is open and thus reduces the undulation.

In regard to the improvement in the feeding of the lamps by vibrations or undulations, Prof. Thomson expresses a decisive opinion. He now says that the vibrations must improve the feeding of a clock-work lamp. He says that I “contented myself by simply saying,” that I cannot agree with him on that point.

Now, saying it, is not the only thing I did. I have passed many a night watching a lamp feed, and I leave it to any skilled experimenter to investigate whether my statements are correct. My opinion is, that a clock-work lamp; that is, a lamp in which the descent of the carbon is regulated not by a clutch or friction mechanism, but by an escapement, cannot feed any more perfectly than tooth by tooth, which may be a movement of, say, 1/15 of an inch or less. Such a lamp will feed in nearly the same manner whether the current be perfectly smooth or undulating, providing the conditions of the circuit are otherwise stable. If there is any advantage, I think it would be in the use of a smooth current, for, with an undulating current, the lamp is likely to miss some time and feed by more than one tooth. But in a lamp in which the descent of the carbon is regulated by friction mechanism, an indulating current of the proper number of undulations per second will always give a better result. Of course, to realize fully the benefits of the undulating current the release ought to be effected independently of the up-and-down movement I have pointed out before.

In regard to the physiological effects, Prof. Thomson says, that in such a comparatively poor conductive material as animal tissue the distribution of current cannot be governed by self-induction to any appreciable extent, but he does not consider the two-fold effect of the large cross-section, pointed out by Sir William Thomson. As the resistance of the body to such currents is low, we must assume either condenser action or induction of currents in the body. 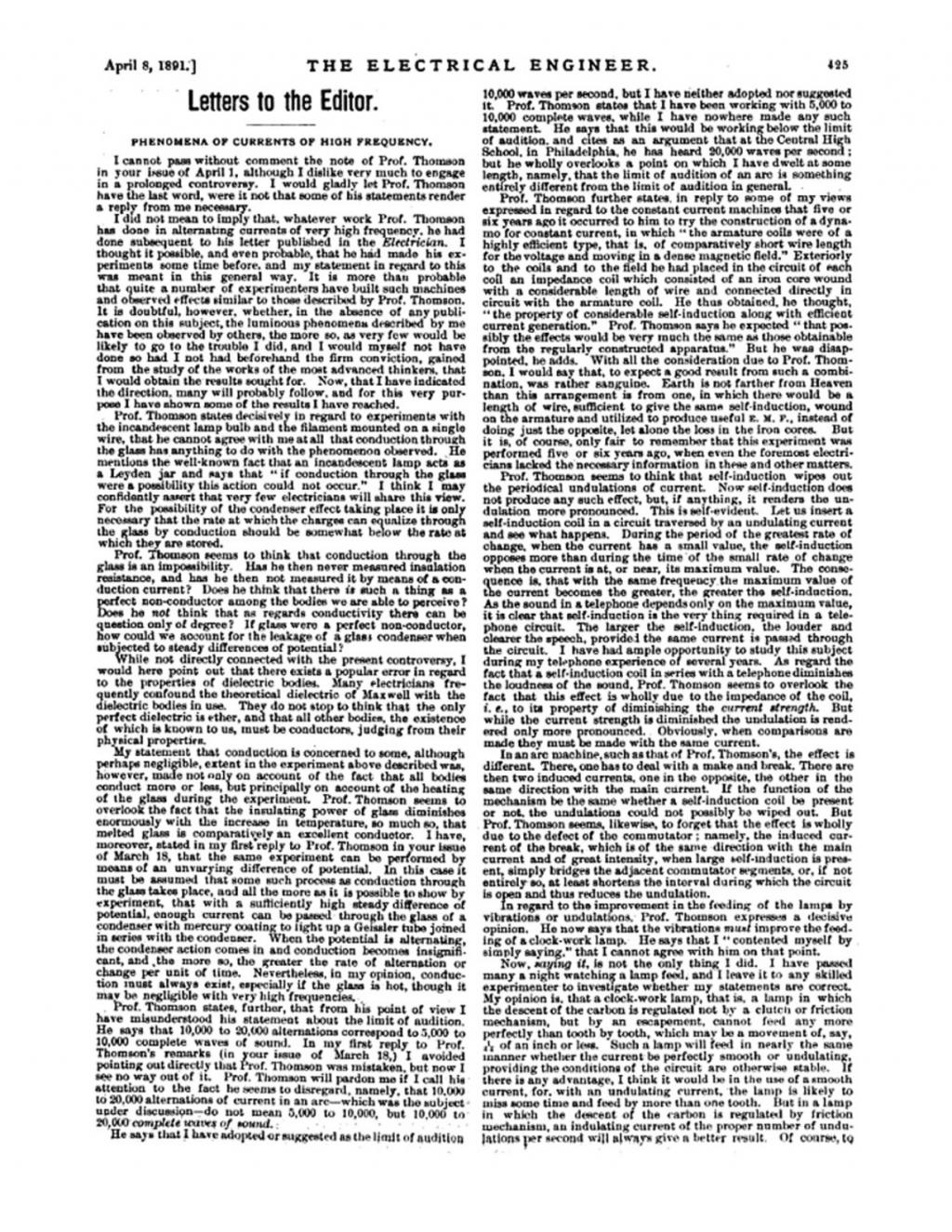