If a delicately and pivoted and well-balanced metal disc or cylinder be placed in a proper plating solution midway between the anode and cathode, one half of the disc becomes electro positive and the other half electro negative. Owing to this fact metal is deposited on one, and taken off from the other half, and the disc is caused to rotate under the action of gravity. As the amount of metal deposited and taken off is proportionate to the current strength, the speed of rotation, if it be small, is proportionate to the current.

The first device of this kind was operated by me early in 1888, in the endeavor to construct an electric meter. Upon learning, however, that I had been anticipated by others, as far as the principle is concerned,¹ I devised the apparatus illustrated in the accompanying engraving. Here F is a rectangular frame of hard rubber which is fastened upon a wooden base. This frame is about ½ inch thick, 6 inches long and 5 inches high. On both of its upright sides are fastened thick metal plates which serve as the electrodes. These plates are held firmly against the rubber frame by the binding posts T T and T¹ T¹. On the lateral sides of the frame are fastened the brass plates B and B¹, respectively, of the same shape as the rubber frame F. These brass plates serve to keep in place two plates of polished glass, and the vessel is hermetically sealed by placing a soft rubber washer under and above each of the glass plates. In this manner the plates may be screwed on tight without fear of breaking them.

The plating solution, which in this case is a concentrated solution of sulphate of copper, is poured in through an opening on the top of the rubber frame, which is closed by a plug R.

In the center of the vessel is placed a light and delicately balanced copper disc D, the axis of which is supported by a capillary glass tube which is fixed to one of the glass plates by means of sealing wax, or other material not attacked by the liquid. To diminish the friction as much as possible, the capillary tube which serves as a bearing contains a drop of oil. The center of the disc should be equi-distant from both the electrodes. To one side of the axis of the disc is fastened a very light indicator or pointer consisting preferably of a thin glass thread. The glass plate next to this pointer has a circle with the usual hour divisions engraved upon it, as on a clock dial. This circle may be movable so that it can be put in any position relatively to the pointer. If the dial is not movable then a thin wire of annealed iron may be used as on a pointer. The wire should then be so placed that it is exactly in the center of the solution. By means of a horse-shoe magnet the disc may then be rotated and set in proper position.

The copper solution being carefully poured in, and the plug R replaced, the terminals of a constant current battery are connected to the binding-posts T T¹, and from time to time the rotation of the disc is observed. A shunt is connected to the other two binding-posts T T¹, and by varying the resistance of this shunt, or other disc, the speed of rotation is regulated until it is made to correspond to the division of the dial; that is, until, for instance, one turn is made in 12 hours.

Obviously this instrument was not devised for a practical purpose. Neither will it be quite exact in its indications. There are certain errors, unavoidable from the principle; for instance, the friction, which cannot be completely overcome. But the device  is interesting as a means of indicating time in a novel manner. It will, however, be found that by a careful construction, constant current, and a temperature compensator, it may be made to rotate with almost perfect uniformity. The current density should, of course, be very small to secure the best results, and the disc of about 3 inches diameter should turn once in 6 hours. It is probable that with a silver solution and a silver plate better results would be obtained.

It is very interesting to note the appearance of the solution and disc in such a narrow transparent vessel. The solution appears a clear blue, one side of the disc seems to be silver white in a certain position, and the other half is dark like tarnished silver. There is no line of demarcation, but the shades melt beautifully together.

[1] The same invention is attributed to J.T. Sprague and T.A. Edison. 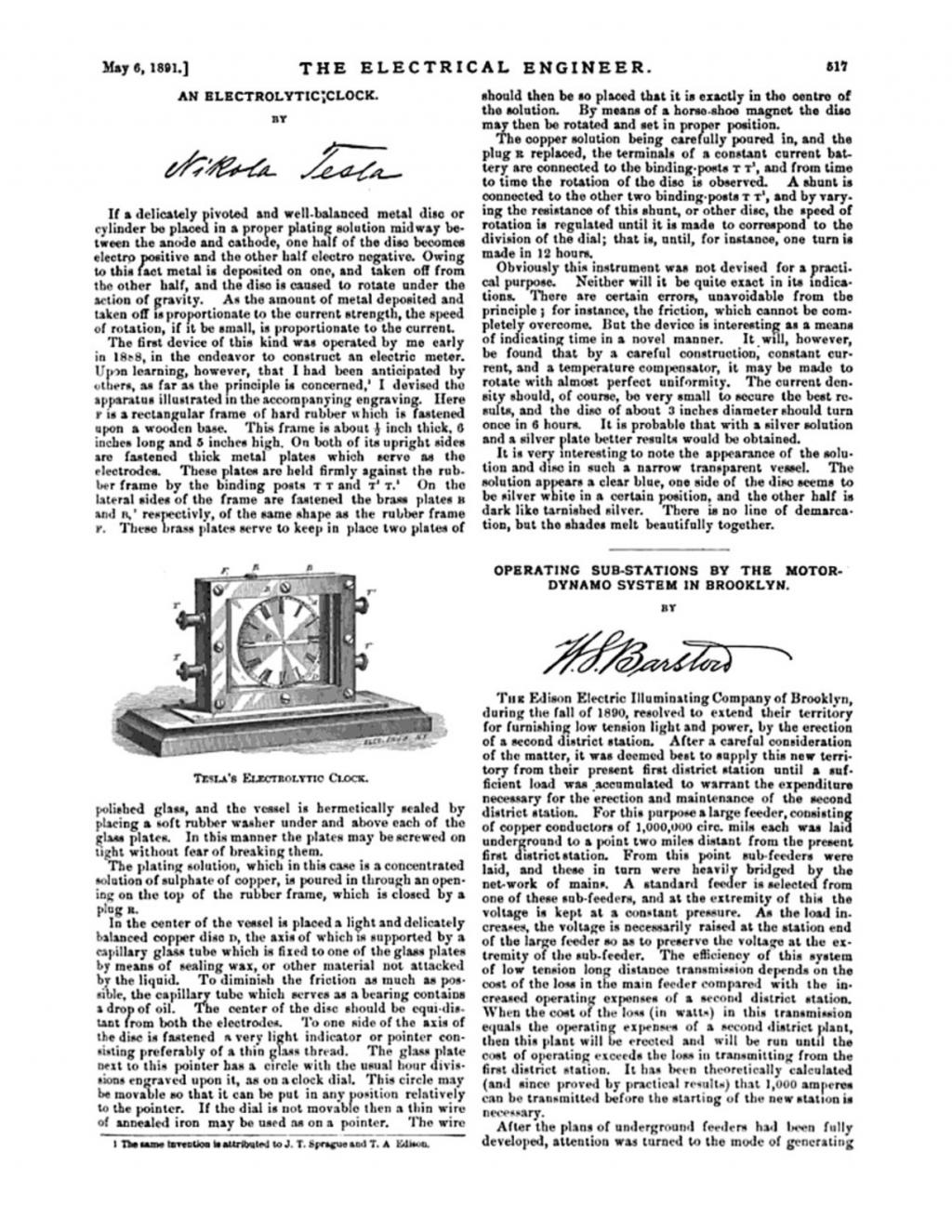