Fireball Production from a Tesla Coil

James and Kenneth Corum searched the historical record for clues as to how Tesla was able to generate fireballs on-demand. They discovered that operating two, different-frequency coils placed inside the primary made this possible. They also found that airborne carbon or metal particulates enhanced the effect.1

Curious as to why so few Tesla coilers had seen fireballs when Tesla reported them as a common, and sometimes almost menacing occurrence, Kenneth and James Corum scrutinized photographs published with Tesla’s Colorado Springs Notes2 and on file at the Tesla Museum in Belgrade. Their investigation revealed that their experimental apparatus hadn’t exactly emulated Tesla’s setup as it appeared in numerous photographs and diagrams. Perhaps the most important feature overlooked was the surrounding of multiple resonators by a single primary coil. (See Fig. 1.) Another feature conducive to fireball production was the addition of a pointed wire to the upper terminal of the extra coil.

Figure 2 shows the Corums’ revised experimental configuration. Tesla patented this concept in 1897, and patented a related communications application a few years later. The design consists of two dissimilar quarter-wavelength, helical resonators, connected to a common ground. Both are enclosed by two turns of a primary coil which magnetically couples them to a spark gap oscillator. The oscillator ran at 58 Hz with peak power around 70 kW. Set to run at a frequency of 800 Hz, it generated sparks lasting 100 µs. Only about 3.2 kW of power was delivered to the circuit, from 2.4 MV RF, which is a hundredth part of what Tesla was using. When operating, the system synchronously pulses high-power RF to the coils.

In their research, the Corums noticed that the secondary coil operates in two alternating modes during Tesla coil operation. (See Fig. 2.)3 While the primary coil is sparking; i.e., the circuit is closed, the secondary operates in a regime that can be modeled using lumped element circuit analysis. This is characterized by beats, from the superposition of oscillations from both coils, on a current vs. time trace. Above a critical level of magnetic coupling, the frequency-based trace is characterized by two voltage peaks, where the time between peaks decreases with tighter coupling. 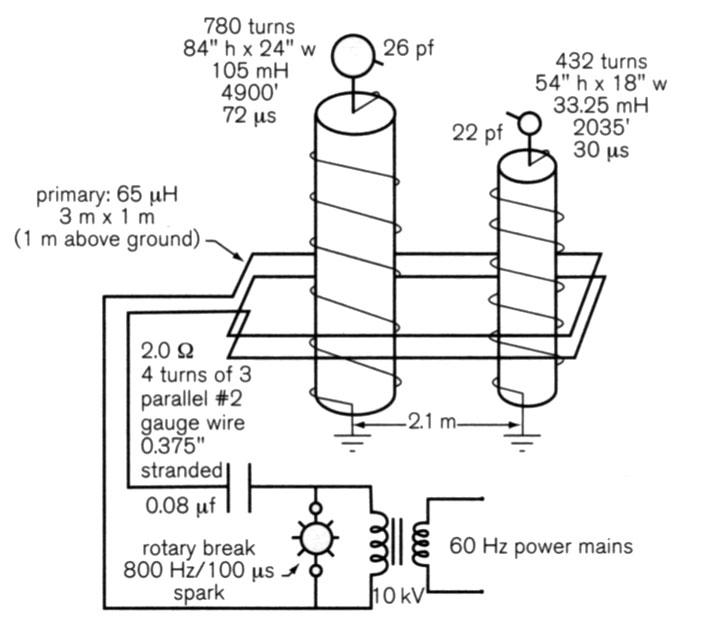 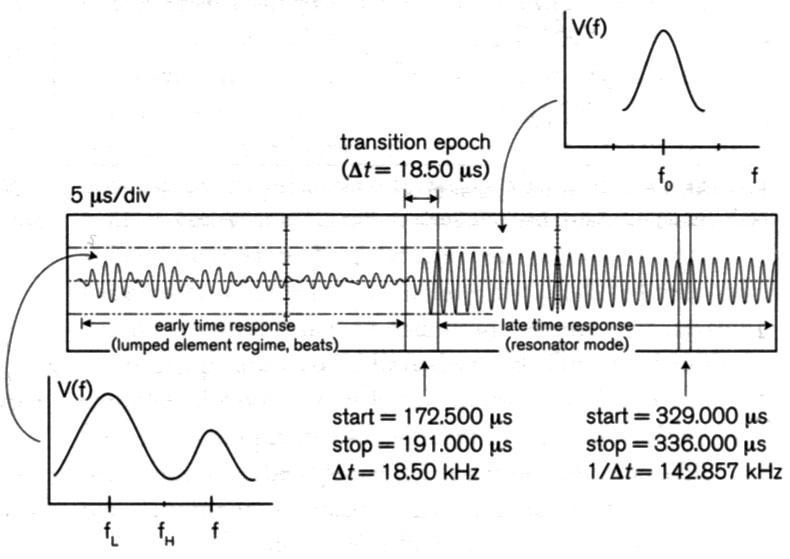 Figure 2 Oscillogram of the resonator transient waveform and spectra. Note that the primary spark conducts only during the early-time response.

When the spark across the primary gap is extinguished, the secondary passes into a regime in which it behaves as a quarter-wave, helical resonator, requiring distributed element circuit analysis. This mode is characterized by a single standing wave oscillating at the secondary’s natural frequency. In this regime, the secondary can be accurately modeled as a simple transmission line to show how even casually-constructed setups can magnify voltage by at least ten to fifty times.

The maximum voltage, at the top of the coil, is simply the product of induced voltage and the VSWR, and the magnification achieved from applying good engineering to increase the VSWR far outweighs any gains obtainable from switching to a better high-power oscillator. Basically, the same measures that would be applied to enhance the output of a top-loaded vertical antenna may also be applied to a resonant transformer. The only significant difference is that Tesla coils are short enough to render radiation resistance negligible.

The Corums attest that a good design is attainable simply by following Tesla’s instructions reiterated in numerous public disclosures. Whereas Tesla’s data from pertinent experiments indicate that he was operating his coils as quarter-wave resonators, the Corums have found that most Tesla coilers run theirs “like reciprocating engines with poor timing.” Maximum benefits can be achieved simply by (1) making the spark duration compatible with the apparatus’ coupling coefficients, and (2) preventing resonator losses, mostly caused by using too many turns and/or too high a gauge of wire.

The Corums tuned their circuit so that, in distributed resonator mode, the lower frequency coil would output a maximum voltage of 2.4 MV at its resonant frequency, 67 kHz; and the higher frequency coil, 200 kV at 156 kHz. The coherence time for each resonator, or the time required to establish a standing wave upon extinction of the primary spark, was, respectively, 72 µs and 30 µs.

The Corums used two variations of their setup to consistently produce fireballs, and their results agreed with Tesla’s observations and explanations. A quote from Tesla can be used to explain the Corums’ observations from operating the setup as illustrated:

The fireballs result from the interaction of two frequencies, a stray higher frequency wave imposed on the lower frequency oscillations of the main circuit...As the free oscillation builds up from the zero point to the quarter wavelength node, it passes through various rates of change. In a current of shorter wavelength, the rates of change will be steeper,...[and] a second oscillator may be used to transmit a shorter wavelength current.... When the two currents react on each other, the resultant complex will contain a wave in which there is an extremely steep rate of change, and for the briefest instant currents may move at a tremendous rate, at the rate of millions of horsepower...This condition acts as a trigger which may cause the total energy of the powerful longer wave to be discharged in an infinitesimally small interval of time and at a proportionately tremendously great rate of energy movement which cannot confine itself to the metal circuit and is released into surrounding space with inconceivable violence.4

In the Corums’ experiments, the energy rushed off the pointed terminus on the low-frequency resonators via streamers and bubbles. After observing, photographing, and videotaping the generation of these bubbles on numerous occasions, the Corums were well-qualified to make generalizations about their appearance and evolution. Generally speaking, the bubbles would first appear as nodules, less than a centimeter in diameter, somewhere along the length of a streamer. These nodules would slowly glide along the streamer, away from the resonator coil. At some point, they would become fixed in space and increase in luminosity as the streamer would fade away. Subsequent streamers appear to be attracted to the balls, and with each successive streamer’s strike, the balls grow in luminous intensity. Without reinforcing strikes, the fireballs would survive for only 1-2 seconds.

Fireballs generated by this means can be spherical or toroidal. In concordance with remarks in Tesla’s notes, they are usually 1-3 cm in diameter, and often larger. The Corums observed fireballs of a variety of colors spanning the visible spectrum, and soon noticed their development followed a Hertzprung-Russell-like sequence. Beginning as red dwarves, the balls change color and size until they reach a bluish-white giant stage. If they don’t explode, like novae, they degenerate to red giant status and fade out. As with stars, the color of the fireballs is probably an indication of their plasma temperature. Continuing the stellar analogy, instances of revolving sunspots and pulsar behavior were not uncommon.

A little air pollution went a long way toward increasing the number of fireballs observed. Appropriate levels of smoke have been generated by placing a candle on top of the low-frequency resonator, or, in Tesla’s day, following his recommendation to hold a cable insulated with rubber near the resonator. The idea that carbon, a common element in wax, paraffin, and old-fashioned rubber, is important if not essential to fireball formation, is further reinforced by historical accounts of ball lightning occurring around chimneys and erupting volcanoes. Research indicates that fireball production is a multistep electrochemical process, and carbon appears only to incubate already existing, microscopic fireballs to observable sizes. Vaporizing metals at the resonator terminus can produce the same effect.

The Corums soon noticed that if they injected airborne particulates into the experimental environment, they could create fireballs with only one resonator coil. This led to the conclusion that plasma ball generation is optimized by rapidly discharging a 1-2 MV/m electric field through a dense smog of carbon or metal particulates. In a second setup, only the low-frequency coil was employed, and a carbon film was deposited on its high-voltage terminus. During operation, current resistively heated the carbon, and the associated power loss rapidly created a region of low impedance at the electrode, where streamers and fireballs were observed as before.

The next step was to see if the artificially-generated fireballs behaved in accordance with accounts of encounters with ball lightning. In one notable scenario, the Corums wanted to see if the fireballs would pass through a window pane, as many witnesses claim. Using the two-resonator circuit, they generated a plethora of fireballs, which indeed appeared to pass through the glass; until scrutinized with stop-frame photography. Whereas in realtime, the fireballs seemed to pass through the glass; on stop-frame video, new fireballs appeared to form on the opposite side of the window, when struck by a streamer, as the old ones faded. The Corums speculated that fireballs are rarely seen in nature because the streamers of lightning strokes are normally spawned somewhere in the clouds.

So far, the two methods described above are the only known means of repeatably generating artificial ball lightning on-demand. The Corums’ knowledge of slow-wave transmission line theory, applied to Tesla’s extensive documentation of plasma ball production, led not only to the rediscovery of this technique, but also to the first credible scientific explanation of the process. Once again, Tesla has been shown to be correct; he specified the conditions necessary and sufficient for artificial fireball generation to be a high-power discharge capable of heating airborne particulates to incandescence. 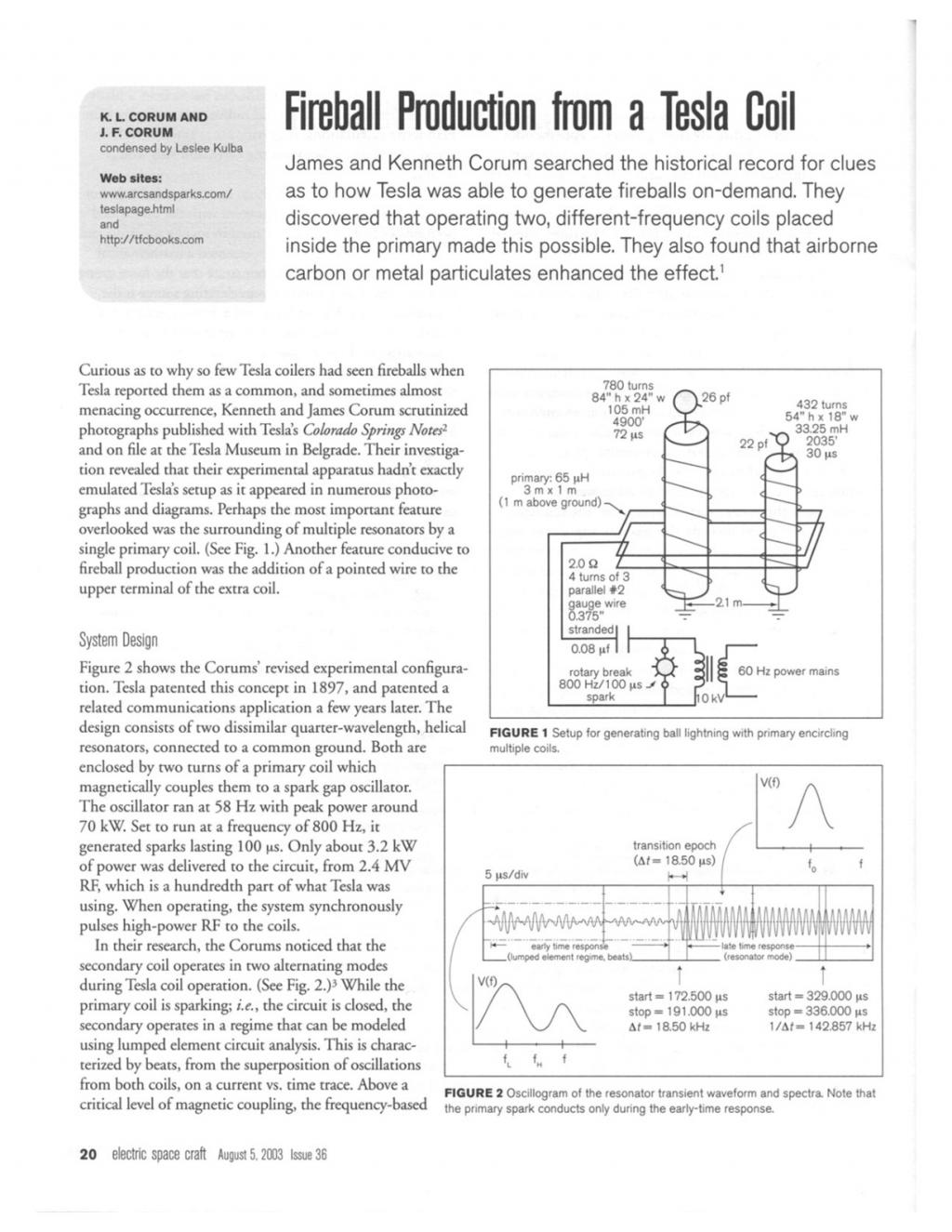