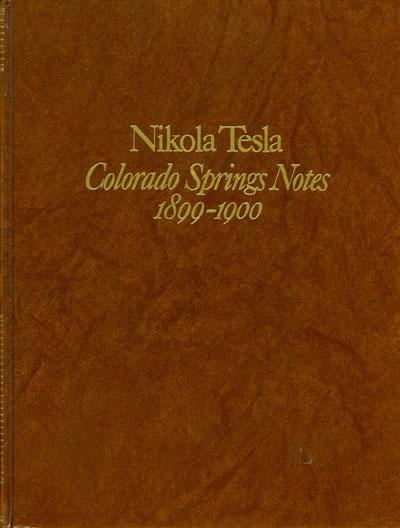 The Nikola Tesla Museum is publishing the third book from the legacy of Nikola Tesla - his research diary written in Colorado Springs. The previous two books contain works that had already been published and had thus been accessible to the public.

The most significant of Tesla's works had been selected and published in their integrity in the first book (Nikola Tesla: Lectures, Patents, Articles, Beograd, 1956 Jin English) while the most important reviews of Tesla's works and the appreciation of their significance for world science are contained in the second book (Tribute to Tesla, Beograd, 1961). Tesla's manuscript (written in English), that has up to now remained unpublished and unknown to the public, is appearing in this book for the first time. Nikola Tesla did not write his diary for the public, but exclusively for his personal use. Obviously, he was writing it to have an insight into the course of his research and due to the exceptional extent of the experiments of his research in the isolated laboratory he had erected in 1899 on the slopes of the mountain Pikes Peak, he was probably writing it with the wish to leave behind some evidence in case of fire or destruction of his laboratory.

Tesla evidently did not intend to publish this diary and left it among his other notes and writings. It was not until the whole legacy of Nikola Tesla had been systematically examined and put in order in the Nikola Tesla Museum that the manuscript of this diary was discovered.

Like all testimonies of this kind, the diary of Nikola Tesla has the value and fascination of a most genuine testimony because it reveals Tesla's ideas in an important period of his research. It reveals the extraordinary enthusiasm and fervor of his inexhaustible and strikingly exploring imagination. In fact, this diary brings to light all that made Tesla different from all other researchers: his creative spirit which often bewildered, amazed and infuriated many of his contemporaries and even some well-informed scientists, to whom it seemed that Tesla's ideas belonged to the sphere of illusion rather than to the acknowledged course of science. Tesla thus shared the fate of all exceptionally great and far-sighted explorers.

In fact, when one carefully studies the entire work of Tesla one can see that his principal aim was very clear: to search for the inexhaustible possibilities of dominating the forces of nature and subordinating them to human purposes thus increasing immensely the power of man and mankind in order to live more humanly. All that Tesla had done was subordinated to this principal aim. All his experiments in Colorado Springs, dealt with in this diary, had also been dedicated to this basic aim.

Because of the extraordinary dimensions of his experiments, which would be unusual even for present-day experimental work in this field, this diary is not only a valuable historical testimony but also an inexhaustible inspiration for further research even when some mistakes are spotted. Tesla was so ingenious and devoted to his indefatigable search for new knowledge that he could permit his little errors to feed all kinds of small-minded people who learned how to calculate well but could never learn to seek for new ways of knowledge because they didn't have a creative gift.

Preliminary arrangements to prepare this diary for publication required a lot of time, effort and collaborators. The Nikola Tesla Museum thanks them all and especially the author-of the commentaries, Prof. Aleksandar Marincic.

By publishing this diary the Nikola Tesla Museum wishes to mark the 120th anniversary of Tesla's birth, which has been celebrated all over the world, as well as to underline the deep devotion which Tesla felt towards this country where he was born.