Ancient Wisdom
More than any other human attribute, Nature detests arrogance. The ancient Greeks told of King Salmoneus, who decided that his power equaled that of Zeus. Thus Salmoneus’ subjects were treated to the spectacle of their king driving his chariot through the city streets, hurling wooden lightning bolts. Zeus summarily destroyed king, city, and citizens. The Greeks called this arrogance before Nature or God “hubris”, and it carries disastrous results for everyone, the innocent as well as the guilty.

The myth doesn’t record whether or not Salmoneus had a soothsayer to warn him of his actions, but one positive human attribute is hope that the arrogant will listen to reason. Nikola Tesla said in 1919, “What we now want is closer contact and better understanding between individuals and communities all over the earth, and the elimination of egoism and pride which is always prone to plunge the world into primeval barbarism and strife… Peace can only come as a natural consequence of universal enlightenment…”

Presently nearing completion in Gakona, Alaska, HAARP features the Ionospheric Research Instrument (IRI) which, when functional, will send 3.6 million watts in a highly focused billion-watt radio beam into the earth’s upper atmosphere. The official purpose of HAARP, a joint operation of the US Navy and US Air Force/Phillips Laboratory, is to understand the workings of the earth’s atmosphere by stimulating small sections of the ionosphere and to enhance communications by using the ionosphere to reflect radio waves. But critics suspect ulterior motives and predict dire results.

Inadequate Press Coverage
Though a few mainstream sources, including Science Magazine and Popular Science have reported on HAARP, most information on the project has come from the environmental press. Gar Smith, in Earth Island Journal, first reported on the possible dangers of HAARP in 1994.

In January of 1995, Dr. Nick Begich reported in Extraordinary Science of HAARP’s connection with Tesla technology and the US government’s history of subterfuge. Later, Begich and Jeanne Manning described HAARP’s horrifying potential consequences in Angels Don’t Play This HAARP. The Exotic Research Report has regularly published factual data on HAARP.

For television, the Fox Network did an expose program on HAARP. The internet has also been a key source of information on the project. Ranging from the dryly technical to the wildly speculative (a former Air Force officer hints cryptically of communication with subterranean “reptoids”), websites and chatrooms abound with HAARP.

On the whole, however, the mainstream media has virtually ignored the potential catastrophic hazard that HAARP poses to the entire global environment — making it one of the most underreported major controversies of the close of this century.

HAARP Tech Specs
Description:
HAARP (in its current configuration) is an antenna array consisting of 360 elements. Each element is a horizontal dipole antenna driven by its own 10kW transmitter.

Operating Concept:
Each element will transmit a narrow beam a few degrees wide (depending on the frequency) and directed upward to interact with the ionosphere. All of the operating elements will be focused on the same point, thus causing all of the energy to be concentrated in one area a few miles in diameter in the lower ionosphere, or several of tens of miles in the upper ionosphere.The intensity of the HF beam in the ionosphere is expected to be on the order of a few milliwatts per square meter.

Prime Power Source:
A complement of six 2500kW electric generators, each driven by a 3600-hp diesel engine. Low power HAARP testing revealed some technical problems. During a sweep through of 5000 frequencies at a sweep rate of 3.2 seconds per sweep over the published frequency range, three even mode resonances were discovered.

When “hit” these modes caused equipment malfunctions in which electrical arcing occurred between the antenna array and the lightning arresters causing a four-inch diameter aluminum plug to vaporize. The only thing left of the plug was an aluminum coating it left on the wires when it disappeared!

Testing during which the incident occurred was done at 100 watts with only 36 elements operating. More incidents of this nature are sure to occur as High Power testing is initiated.

A Film Project…
Paula Randol-Smith heard this information and couldn’t rest. She was determined to bring HAARP before the public for which it could be either a blessing or a nemesis. She began production on a film — Holes in Heaven? Advances in Tesla Technology, a documentary exploring both sides of the project.

Randol-Smith began work alone in the converted garage that served as her office at home, amassing information and raising funds. Randol-Smith sold her home and maxed her credit cards to help finance the film. While fiscal sponsorship from the International Documentary Association has been invaluable, grassroots fundraising provided the bulk of support.

The project has since entailed miles of travel across the United States, Randol-Smith in search of funds, and Wendy Robbins to meet with scientists and activists from Alaska to Massachusetts.

Research was a formidable task. Preparation meant reading every piece of available information from the government and from the critics. Robbins, who won an Emmy for her film “Ozone Danger Zone”, is no stranger to science, but she soon found that her job would include learning the complexities of plasma physics and simplifying them for her audience. Robbins’ research included observing museum exhibits and elementary school materials which made scientific concepts accessible to children, and adapting these techniques for the film.

Randol-Smith conducted interviews for the film which include HAARP Project Manager John Hecksher; Dr. Bernard Eastlund, upon whose work much of HAARP is reportedly based; authors Begich and Manning; and others. They all acknowledged that it is a global issue and that it is one of the most exciting experiments ever conducted in understanding our ionosphere.

A Broadened Scope…
HAARP representatives, as might be expected, stuck to their guns, assuring the filmmakers there is nothing to fear from the project. It was the information from the opposing camp, though, that caused “Holes in Heaven?” to widen its scope into the netherworlds of mind control, directed energy weapons, and even earthquake generation.

If HAARP in its present state is indeed as harmless as its builders claim, it is still part of an ongoing technology that represents over fifty years of (apparently successful) attempts to control Earth forces through Extremely Low Frequency (ELF) waves. ELF waves can be synchronized with human brainwaves and Earth resonances.

HAARP critics offer up documentation of both the United States and former Soviet Union’s quest for both mind and weather control. Secretary of Defense William Cohen on April 28, 1997 warned of “…an eco-type of terrorism whereby [terrorists] can alter the climate, set off earthquakes, volcanoes remotely through the use of electromagnetic waves.”

The filmmakers were struck that nobody knows for certain what the side effects might be. One worst case scenario — which the government scientists claim is not in the realm of probability — is an ion column: the ionosphere has become so charged with energy that it discharges a lightning bolt which can destroy the equivalent of twelve square city blocks each second for an indefinite period of time — an effect unnervingly similar to Zeus’ revenge upon presumption.

Another unnerving similarity is that of HAARP’s technology to the concepts of Nikola Tesla. There are marked similarities between Eastlund’s transmitter patents and patents assigned to Tesla almost a century earlier. However, government scientists deny that HAARP is Tesla-based technology.

Tesla Technology!
The government scientists didn’t refer to Tesla’s work at all, but Tesla experimented with a number of things that HAARP does. Tesla wanted to alter weather, and while Hecksher says HAARP can’t affect weather; that is one of the things Eastlund wanted to do. Additionally, Tesla played with the resonance of the Earth, as well as with sound and vibrations.

Tesla also saw that rash actions carried consequences:
If we were to release the energy of the atoms or discover some other way of developing cheap and unlimited power at any point of the globe this accomplishment, instead of being a blessing, might bring disaster to mankind…

Tesla said in 1912 that he could split the earth in two, with the right frequencies and the right rhythm, and, of course, that is what HAARP is playing with.

A Public Consensus
The purpose of “Holes in Heaven?” is not to halt HAARP in its tracks, but to bring it before the public. Holes in Heaven? tries to make the subject understandable and to give both sides of the story, so people can make their own decisions.

Tesla once said:
Science is but a perversion of itself unless it has as its ultimate goal the betterment of humanity. 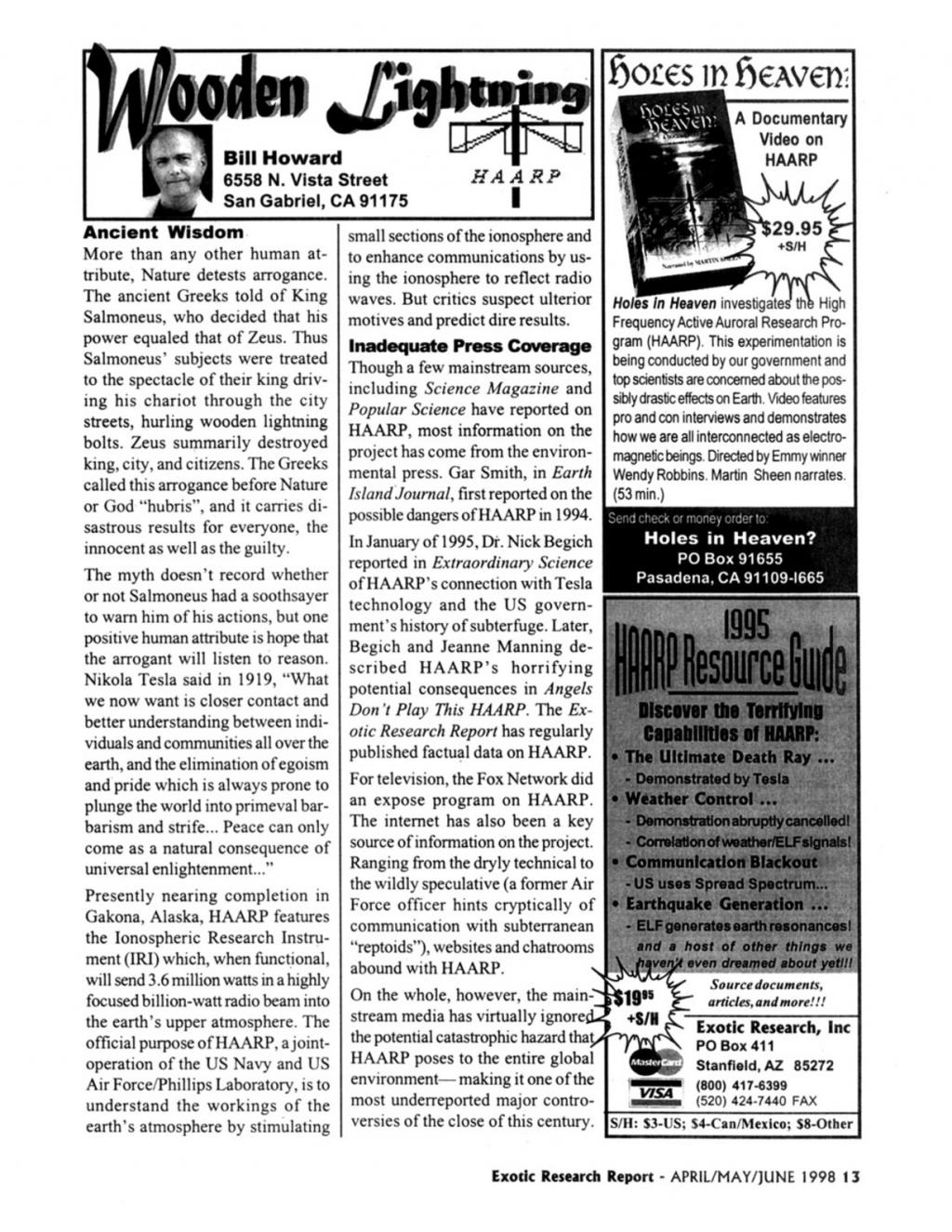