Source: Name witheld (sic) by request. The Source is from Belgrade, in the former Yugoslavia.

Documents from a European Source express concern about the future of the contents of the Tesla Library in Belgrade. The Source has reason to believe that on more than one occasion, Tesla papers from the library have been sold by private parties in authority at the museum. Other signs of corruption are also visible. The archives and catalogues of the Tesla Museum, as of April 1996, are said to have been closed to all but the highest officials, who are suspected of misusing the museum for personal advantage.

The Source reports that he has seen an original copy of a Tesla manuscript, bearing the stamp of the Tesla Museum, for sale underground. Rumors of other documents floating around for sale are not uncommon. Attempts to conduct a police investigation into the mishandling of museum documents have failed.

Political suspicions feed into the fears of persons interested in preserving the integrity of the Tesla Museum’s materials. The library closed after a scandalous visit to the museum by members of the Japanese cult, Aum Shinrikyo. Patrons are also afraid that the library is being partisan to the Soviets. The fears are compounded by allegations that more than 1000 names have been removed from the catalog of correspondents for unknown reasons. Josef Stalin was one such correspondent, and a letter he wrote inviting Tesla to the Soviet Union, which was known to be kept in the Tesla Museum, is no longer there.

The Source is concerned that Tesla’s documents are not safe under the current museum administration; but is worried that the political instability may cause the library to be turned over to other political cronies or appointees with no regard for the value of the documents in the museum. Late-breaking rumors from the Source indicate that the museum is further imperiled by a potential relocation to Zagreb, Croatia.

This Japanese interest in Tesla technology has been under investigation by the US Senate Permanent Subcommittee on Investigations, Committee on Governmental Affairs chaired by senators William V. Roth, Jr. and Sam Nunn. Yumiko Hiraoka, sect leader of the New York City chapter of Aum Shinrikyo, testified at the hearing on global proliferation of weapons of mass destruction on Oct. 31, 1995. 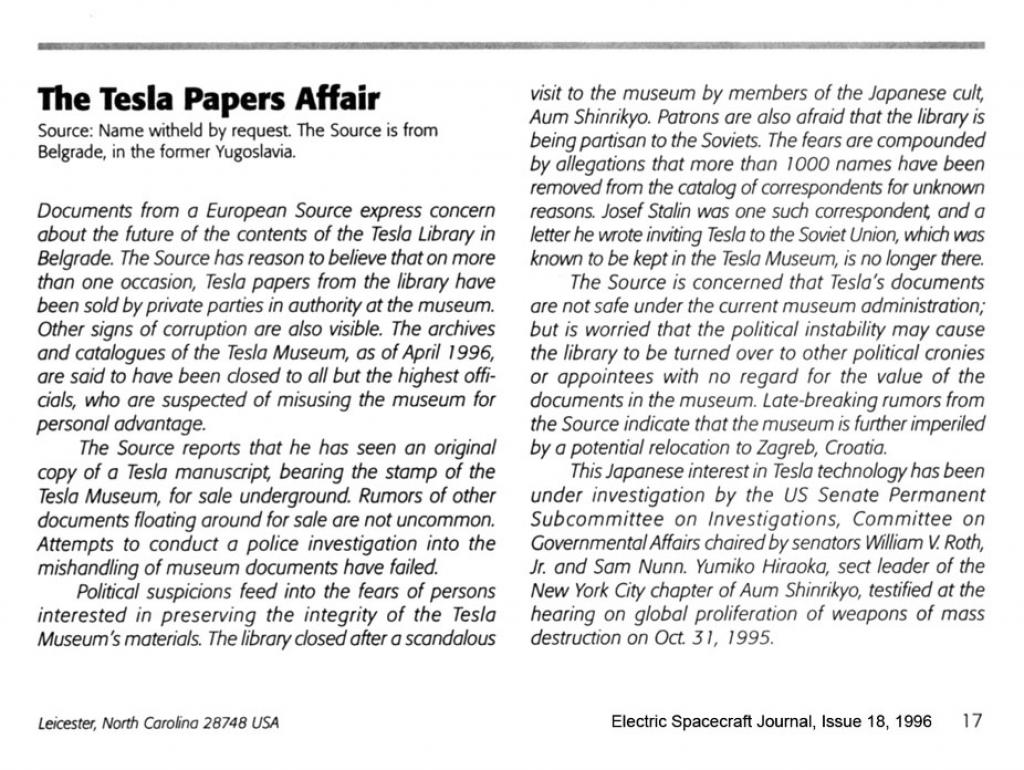