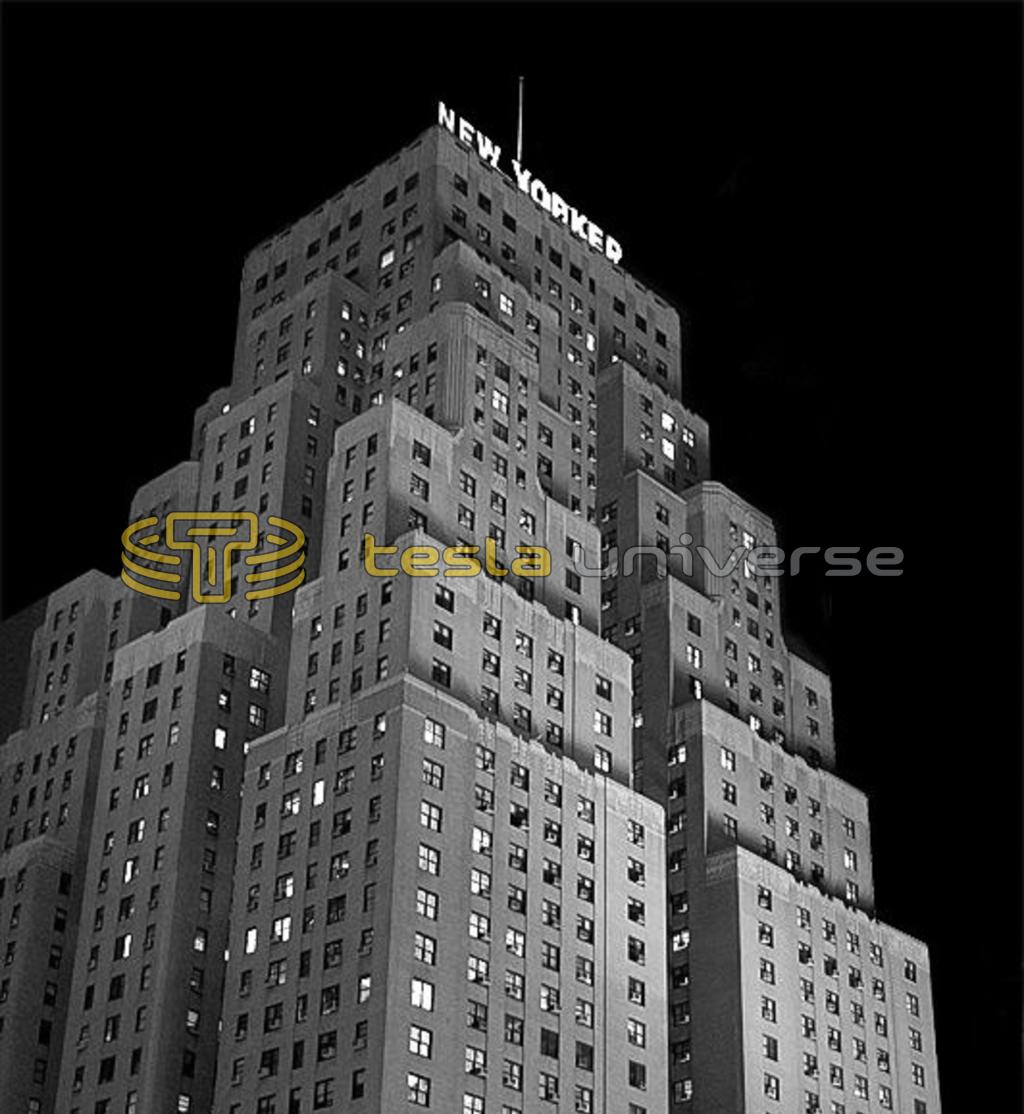 The Hotel New Yorker holds a special place in the biography of the famous electrical genius and inventor, Nikola Tesla, being his home from 1934 until his death on January 7th, 1943. As a single man and completely absorbed in his hundreds of inventions, he had little time to devote to the maintenance of a conventional household. He chose instead to live in a succession of luxury hotels. Because of his friendship and association with the Astor family’ he lived for many years (1900-1919) in the old Waldorf-Astoria, now the site of the Empire State Building. In subsequent years he lived in the Hotel St. Regis, the Marguery, the Pennsylvania, the Governor Clinton and finally the New Yorker (1).

His 700 patents include the seminal inventions of the modern system of alternating current production, transmission and utilization; the basics of radio; and the high frequency Tesla Coil. These accomplishments made Nikola Tesla perhaps the youngest and greatest of that special group of independent inventors who were most productive around the turn of the Twentieth Century. Looking back after many decades on a man whose personality of culture, science and altruism makes him seem almost alien in the materialism of today. This has caused some people to attribute powers and drama to his life and his work that are not always well founded.

Among the stories associated with Nikola Tesla is that he died in poverty in 1943. While he did not retain the wealth and income that was his situation in previous years, he lived in a two-room suite in one of the most luxurious hotels in Manhattan, the Hotel New Yorker. To adequately position the New Yorker among the leading hotels of Manhattan during the years Tesla called it his home, it is appropriate to review some of the details of its construction and amenities (2).

The Hotel New Yorker opened for guests on January 30, 1930. With 2,500 guest rooms and 43 stories, it was the largest and tallest hotel in New York. At $22,500,000, it was the most costly hotel construction to that date. The hotel was self-sufficient in all aspects of electrical power, heating, cooling and ventilation for up to 3,500 hotel guests and up to 30,000 visitors daily. These facilities were located in four subbasements as well as in several above ground areas. A staff of 2,000 provided a high level of guest, dining and banquet services. 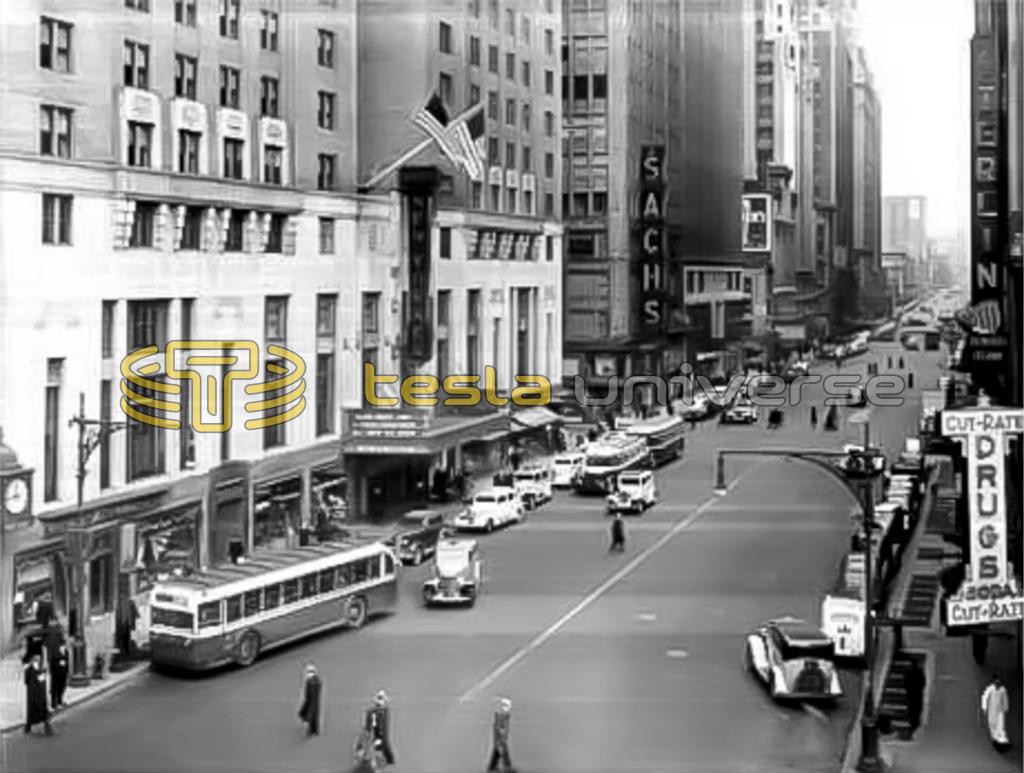 Located at 8th Ave and 34th St, Hotel New Yorker was in the heart of New York. Across the street from Madison Square, it is only 3 blocks from the Empire State Building... with Macy’s famous store in between. There’s no doubt it was a practical choice for a single man of means, in the 1930s.

Construction started in June of 1928, after the removal of obsolete structures on a plot of 197.5 by 175 feet on the west side of 8th Avenue between 34th and 35th Streets. The completed structure contained 10,400,000 cubic feet of enclosed space above ground and 2,000,000 cubic feet below ground. A tunnel connected the Hotel with nearby Pennsylvania Station. There was subterranean access to the New York subway system. A bank and several other commercial businesses were provided space and facilities in the public areas of the Hotel.

The Hotel New Yorker was a world unto itself, with thousands of employees to satisfy its guests’ needs. In addition to the ammenities below, it even had its own hospital! Located in the heart of New York, at 43 stories high... it was a “vertical village!”

Air conditioning was provided to the main dining room, grill room, tea room, banquet hall, main ballroom and eight private dining rooms by an odorless (carbon dioxide) refrigeration system of 166 tons capacity. Twelve all-automatic (but attended) main passenger elevators were provided, six local to the 19th floor and six express to the 20th to 39th floor. Six service elevators operated, three from the 3rd basement to the roof (44th floor) and three from the 3rd basement to the 39th floor. There were also two freight elevators (4th basement to 3rd floor); one large ballroom elevator (1st to 3rd floor); one large subway elevator (2nd basement to 2nd floor); and an elevator for the bank ( 1st basement to the 2nd floor). One bank and four Hotel dumbwaiters were also provided.

Every guest room had a telephone. The Hotel maintained one of the largest private telephone exchanges to provide service, including a 24-position switchboard on the 39th floor. Every guest room had a (four program channel) radio. Tap ice water was available in every guest room in addition to regular hot and cold running water. Every guest floor had a room clerk station connected to the lobby by telephone, telautograph and pneumatic tube systems. (The Hotel maintained a 60-station pneumatic tube system for interdepartmental messaging.)

Electric power was provided by four steam-driven engines direct connected to three 600-kw and one 400-kw DC generators and one 535-hp diesel engine directly connected to a 375-kw DC generator. The 2,575-kw capacity was sufficient not only to provide 115 volt light and 230 volt power for all Hotel uses, including 200 motors used for other Hotel services, but to provide service to all adjoining buildings. (Normal usage was for two units running and two units plus the diesel unit in reserve.) The Hotel did not convert to Alternating Current until about 1965.

As the comfort and convenience of guests was paramount in the running of a luxury hotel, all service systems and facilities tended to be designed with large safety margins for the original 1930 Hotel New Yorker. This over-design is certainly a significant factor in the continuing popularity of the current Hotel New Yorker, 71 years young. 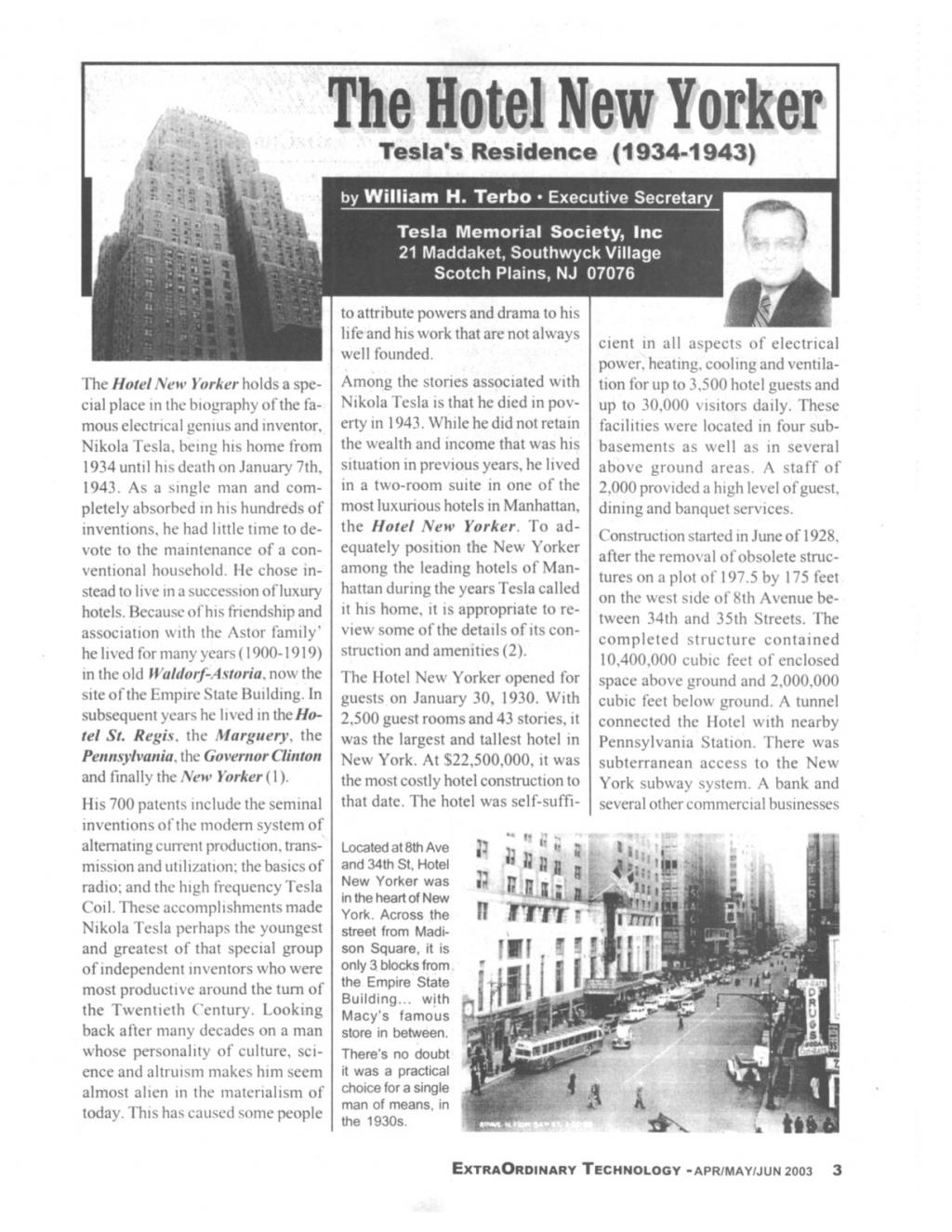