By a fire which occurred at 33 and 35 South Fifth Avenue, New York City, on the morning of March 13, Nikola Tesla, the inventor and scientist, sustained a severe loss in the total destruction of his laboratory, in which were several nearly completed inventions which, it is said, were intended to revolutionize electric lighting. The loss cannot unfortunately be reckoned in dollars, and it is feared may seriously affect Mr. Tesla’s health, as for some time he has been in a state of nervousness bordering on exhaustion, on account of overwork occasioned by the approach to completion of some of his great inventions.

Dr. Tesla was for a time associated with Edison. The attention of the scientific world first centered upon Tesla in 1887 through his invention of the rotating magnetic field for the economic transmission of power. It is believed that Mr. Tesla’s experiments were made with a view to saving at least one-third of the energy now wasted in electric lighting. He has been working in his laboratory with a number of assistants, and the results which he has actually obtained have been kept a profound secret. Mr. Tesla has lectured before scientific bodies, both in Europe and America, and he has recently received honorary degrees from Yale and Columbia Colleges. He is at present controlling electrical engineer of the Niagara Falls Power Company. Some of Mr. Tesla’s remarkable experiments have been reproduced lately in Berlin. The Illustrirte Zeitung of recent date gives an engraving, which we copy, together with the following account:

“About twenty years have passed since Edison produced the incandescent lamps under the proud name of the ‘light of the future,’ and which lamps slightly modified are now the ‘light of to-day.’

“A new ‘light of the future,’ is again promised from the United States, and should it materialize in practical form will have the great advantage over the incandescent and arc lamps that for its production no conducting wires are required, and which for this reason alone would be sufficient to produce a complete revolution in the electrical world.

“Nikola TesIa, the inventor of the new light, obtained by his experiments surprising results. In following up certain discoveries of Prof. Herz, of Bonn, relative to electrical waves, he succeeded in lighting a freely suspended incandescent lamp by the use of high tension and rapidly alternating currents.

“The experiments further demonstrated the remarkable fact that alternating currents of a tension ten times that which is used in electro-execution do not affect or injure the human body when passed through the same; and in fact are hardly perceptible in case the currents alternate 100,000 times in a second, that is, change their direction at this almost incomprehensible velocity.

“Several of the experiments were made at the last annual meeting of scientists in Vienna, but through Prof. Spies, one of the members of the Berlin ‘Urania,’ the experiments were made publicly, and were attended by the German Emperor’s brother, Prince Henry, who, as the cut shows, served as a conductor for the high voltage currents. By reference to the illustration, it will be seen that the connection between two persons is made by Geissler tubes, which show the light produced by the currents. In another experiment a number of connected wires were arranged in the auditorium and connected with the electric current, whereby an electrical wave was produced in the room, and noticed by some of the audience through the lighting of Geissler tubes held in their hands, and without these persons being in direct connection with the wires.” 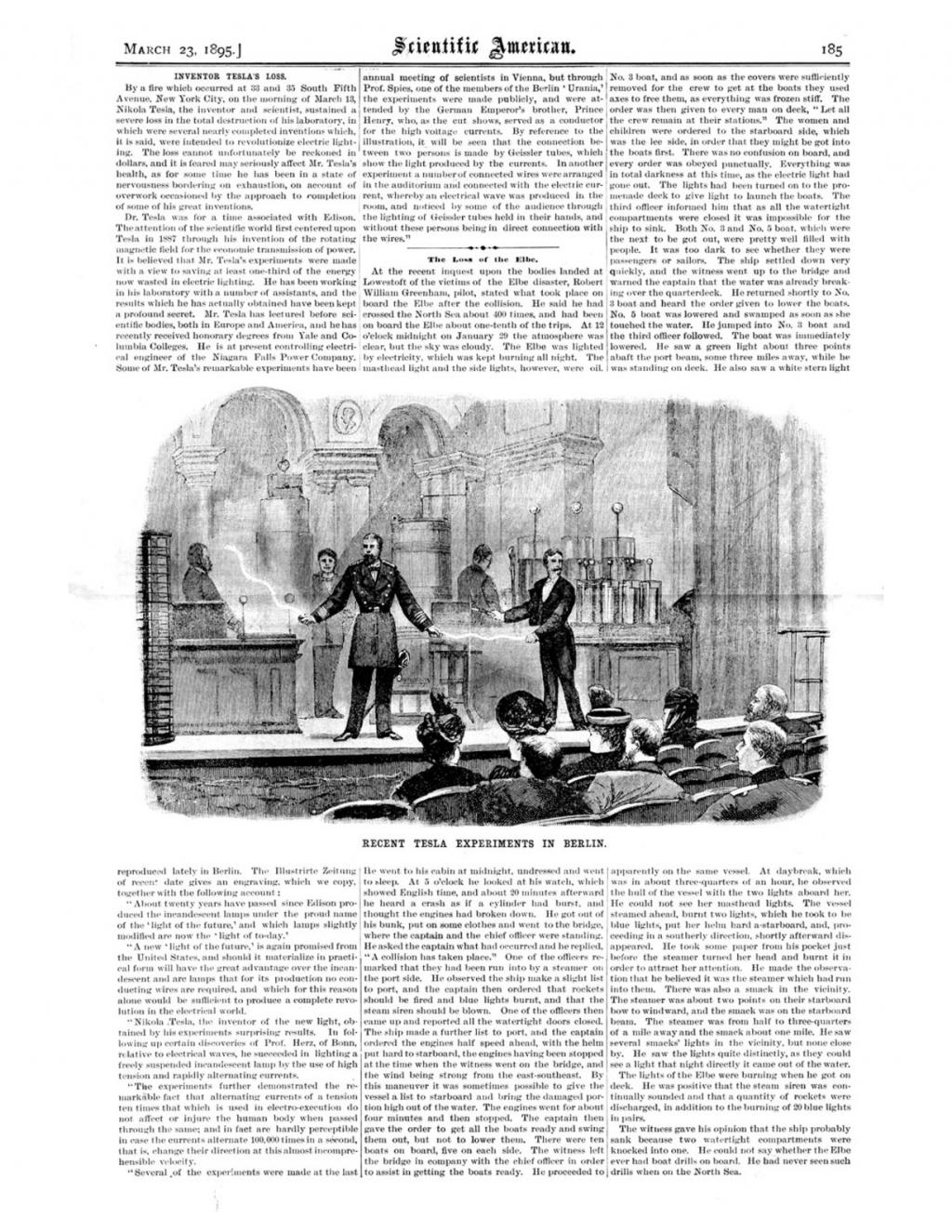