In order to convey a clear idea of the significance and revolutionary character of this discovery it is indispensable to make a brief statement regarding ELECTRICAL THERAPY.

Fifty years ago, while investigating high frequency currents developed by me at that time, I observed that they produced certain physiological effects offering new and great possibilities in medical treatment. My first announcement spread like fire and experiments were undertaken by a host of experts here and in other countries. When a famous French physician, Dr. D'Arsonval, declared that he had made the same discovery, a heated controversy relative to priority was started. The French, eager to honor their countryman, made him a member of the Academy, ignoring entirely my earlier publication. Resolved to take steps for vindicating my claim, I went to Paris, where I met Dr. D'Arsonval. His personal charm disarmed me completely and I abandoned my intention, content to rest on the record. It shows that my disclosure antedated his and also that he used my apparatus in his demonstrations. The final judgment is left to posterity.

Since the beginning, the growth of the new art and industry has been phenomenal, some manufacturers turning out daily hundreds of sets. Many millions are now in use throughout the world. The currents furnished by them have proved an ideal tonic for the human nerve system. They promote heart action and digestion, induce healthful sleep, rid the skin of destructive exudations and cure colds and fever by the warmth they create. They vivify atrophied or paralyzed parts of the body, allay all kinds of suffering and save annually thousands of lives. Leaders in the profession have assured me that I have done more for humanity by this medical treatment than by all my other discoveries and inventions. Be that as it may, I feel certain that the MECHANICAL THERAPY, which I am about to give to the world, will be of incomparably greater benefit. Its discovery was made accidentally under the following circumstances.

I had installed at the laboratory, 35 South Fifth Avenue, one of my mechanical oscillators with the object of using it in the exact determination of various physical constants. The machine was bolted in vertical position to a platform supported on elastic cushions and, when operated by compressed air, performed minute oscillations absolutely isochronous, that is to say, consuming rigorously equal intervals of time. So perfect was its functioning in this respect that clocks driven by it indicated the hour with astronomical precision. One day, as I was making some observations, I stepped on the platform and the vibrations imparted to it by the machine were transmitted to my body. The sensation experienced was as strange as agreeable, and I asked my assistants to try. They did so and were mystified and pleased like myself. But a few minutes later some of us, who had stayed longer on the platform, felt an unspeakable and pressing necessity which had to be promptly satisfied, and then a stupendous truth dawned upon me. Evidently, these isochronous rapid oscillations stimulated powerfully the peristaltic movements which propel the food-stuffs through the alimentary channels. A means was thus provided whereby their contents can be perfectly regulated and controlled at will, and without the use of drugs, specific remedies or internal applications whatever.

When I began to practice with my assistants MECHANICAL THERAPY we used to finish our meals quickly and rush back to the laboratory. We suffered from dyspepsia and various stomach troubles, biliousness, constipation, flatulence and other disturbances, all natural results of such irregular habit. But after only a week of application, during which I improved the technique and my assistants learned how to take the treatment to their best advantage, all those forms of sickness disappeared as by enchantment and for nearly four years, while the machine was in use, we were all in excellent health. I cured a number of people; among them my great friend Mark Twain whose books saved my life. He came to the laboratory in the worst shape suffering from a variety of distressing and dangerous ailments but in less than two months he regained his old vigor and ability of enjoying life to the fullest extent. Shortly after, a great calamity befell me: my laboratory was destroyed by fire. Nothing was insured and the loss of priceless apparatus and records gave me a terrific shock from which I did not recover for several years. The enforced discontinuance of MECHANICAL THERAPY also caused me deep regret. I had evolved a wonderful remedy for ills of inestimable value to mankind and invented apparatus offering unbounded commercial possibilities but when I came to consider practical introduction I realized that it was entirely unsuitable. It was big, heavy and noisy, called for a continuous supply of oil, part of which was discharged in the room as fine spray; it consumed considerable power and required a number of objectionable accessories. During the succeeding years I made great improvements and finally evolved a design which leaves nothing to be desired. The machine will be very small and light, operate noiselessly without any lubricant, consume a trifling amount of energy and will be, to my knowledge, the most beautiful device ever put on the market. The intention is to exhibit it in action at the occasion of my annual reception in honor of the Press which has been, unfortunately, delayed this year, and I anticipate that it will elicit great interest and receive wide publicity. Unless I am grossly mistaken it will be introduced very extensively and, eventually, there will be one in every household.

The practical application of MECHANICAL THERAPY through my oscillators will profoundly affect human life. By insuring perfect regularity of evacuations the body will function better in every respect and life will become ever so much safer and more enjoyable. One of the most important results will be the great reduction — amounting possibly to seventy-five per cent — in the number of heart failures, which are mostly caused by some acute upset of the digestive process and normal operation of the stomach. Another vital improvement will be derived from the quickened removal of toxic excretions of organs affected by disease. It is reasonable to expect that through this and other healthful actions ulcers and similar internal lesions or abscesses will be cured and relief might be obtained even in case of a cancer or other malignant growth . Skilled physicians and surgeons will be able to perform veritable miracles with such oscillations. They stimulate strongly the liver, spleen, kidneys, bladder and other organs and by these desirable actions they must contribute not a little to well being. Persons suffering from anaemia of any form will be especially helped by the treatment. But the greatest benefit will be derived from it by women who will be able to reduce without the usual tantalizing abstinence, privation, sacrifice of time and money and torture they have to endure. They will improve much in appearance, acquire clear eyes and complexions and it may be safely predicted that long continued treatment will bring forth feminine beauty never seen before. It is not to be forgotten that the elimination of countless drugs, patent medicines and specific remedies of all kinds taken internally, by which millions of people doom themselves to an early grave, will be of untold good to humanity. 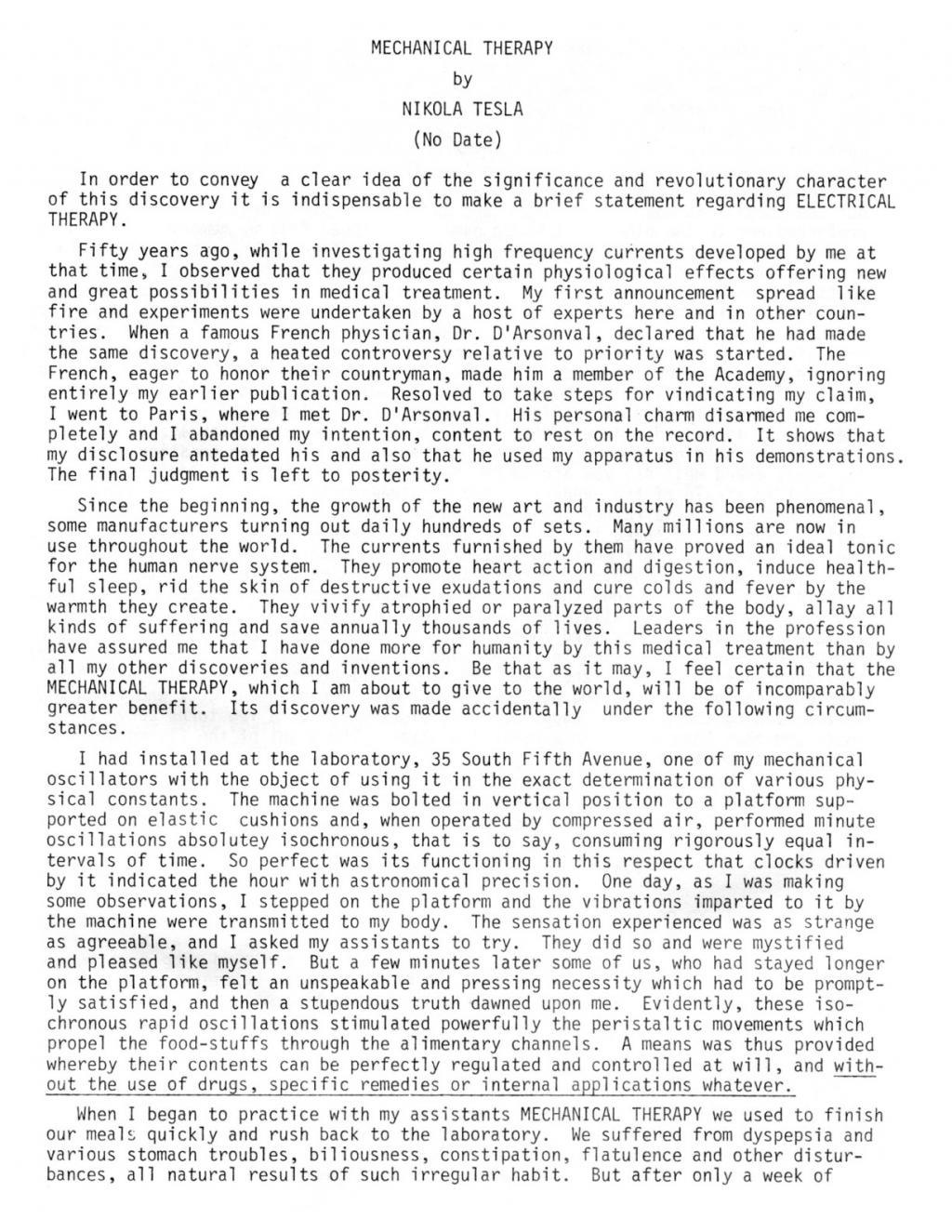