By Nikola Tesla - World Famous Scientist and Discoverer in the Field of Modern Electrical Invention. In an Interview with George Sylvester Viereck.

"What would you do, if you were Emporer of Ethiopia?"

This question, addressed to Nikola Tesla, suggested itself to me when I remembered the recent announcement by the discoverer of the rotating electric field, that he had perfected certain inventions by which the weak could protect themselves against the strong.

These inventions, it was claimed, could destroy whole cities and put an attacking fleet of airplanes out of commission at great distance.

Could these means be employed by Ethiopia to hold off Mussolini?

I sought out the inventor in a skyscraper hotel, where he ponders over new scientific devices.

Tesla was deeply absorbed in thought, but his sternness melted and his pale face was illuminated by an understanding smile.

"Why do you ask me this question? I bear no ill will against Italians; they have brought forth great men in science, literature and art, and supplied workmen and artisans who have advanced humanity.

"This alleviates their contemplated act of piracy. Other nations have done worse. Nations cannot be judged by the same standards as individuals.

"If I were the ruler of Ethiopia, I would rigorously utilize every natural advantage of my country to nullify the effectiveness of this superior armament and, above all, to prevent him from staging a sensational air-attack, destructive to the morale of my simple-minded subjects.

MUST USE THEIR WITS.

"As a first and absolutely indispensable measure I would order the complete evacuation of Addis Ababa and all other places of importance without a moment's delay.

I believe that Haile Selassie already contemplates some such course.

"I would leave no civilians behind in dealing with Mussolini. Though a man of genius and culture, the Duce has a strain of ferocity in his make-up, which appears in some of his outbursts. Savagely bent upon avenging the crushing Italian defeat at Adowa, Mussolini would command ruthless destruction.

"I would scatter my people in the thickly wooded regions and tell them that they must match with cunning what they lack in might to escape annihilation.

"Italian air fleets will darken the sky to overawe the population, probably. But will they bomb towns and settlements, deserted and stripped of all things of value? That would be a costly sport. It would incur the scorn and ridicule of the world. If my directions were strictly followed, the Italian airman could never find the Ethiopian in the tropical underbrush."

"Knowing that the Ethiopians are hidden there, would the Italians not scatter their bombs over their forests?"

"The noise of bombs hurled from airplanes under such conditions would be entirely out of proportion to their destructiveness; they would kill very few people," Tesla replied with a laugh.

"The dense tropical growth is an ideal impediment against gases and bombs and greatly reduces the range of such devices. Remember also that Ethiopia has a surface of 350,000 square miles, and a population of only 10,000,000, or, on the average 25 inhabitants per square mile. Even to clean out an insignificant jungle requires thousands of ordinary bombs."

"But if the Italians resort to poison gas, what then?"

"Such attacks must fail. It is a common mistake to disregard the character of the terrain in estimating the military value of modern arms.

"Weapons that could be used with disastrous results in Europe, will prove futile in Ethiopia. Poison gas is released by bursting bombs or sprinkled from reservoirs. The weight of these gases is insignificant compared with that of the containers and accessories required for their transportation. To provide 1,000 cubic feet of gas, a plane must carry equipment weighing one ton, and 1,000 cubic feet of gas is no more than a drop in a barrel.

"If I were the King, I would teach my subjects how to render themselves immune to poison gas. To explain the scheme, I must go back to my young days in Yugoslavia. As a boy I was very fond of running against the wind and observed that in the summer there was a steady breeze from the land covered with vegetation to a desolate region, barren of growth and strewn with rocks.

"'Why does the wind always blow that way?' I asked my mother. 'Because God has willed it so, my boy.' 'But why has God willed it so?' My curiosity was not satisfied until I acquired some knowledge of physics and mechanics.

"Then I understood that the bleak region exposed to the direct glare of the sun became very hot. The expanded air rose, reducing the static pressure. Then, the cooler and denser air from the surrounding country rushed in, to be in turn heated and caused to rise.

"In Ethiopia, where the thermometer registers as much as 140 degrees in the shade the exposed regions attain scorching heat and the ensuing air-current is swift and of large volume.

"Travelers, noting the prevalence of winds, have not attached any significance to them. Yet, here lies the salvation of Ethiopia. These winds are of supreme importance in gas war. They dilute the gases very greatly and quickly and at the same time supply the vivifying oxygen.

"If I were Haile Selassie, I would station my subjects behind natural or artificial barriers sheltering them from the wind. The gas, released in front of them, will be rendered innocuous, because it will be carried off by the wind from which they are protected. The gas released behind them will be extremely diluted. Stream-ing past the barrier, it will cause little harm.

"Perhaps my suggesting this remedy in my wholly hypothetical role, I may be rendering a service to both combatants.

"But the Italians have been preparing long for this war; they may spring surprises. It was reported that their chemists have produced a powder which will burn the feet of the Ethiopians and put them out of combat.

"That must be the proposition of a practical joker or an ignoramus. it would not be possible to manufacture 1 percent of the powder necessary for this purpose. If a limited quantity were sprinkled on the roads and pathways, the Ethiopians would soon find out and beware.

"In my opinion the Italians will be wise to abstain from the use of poison in any form. The natives could retaliate by poisoning all wells. This kind of warfare could not fail to prove a calamity; it would bring about a holocaust among the animals. Their putrifying bodies would bring on pestilence. Water would carry the germ-infection far and wide.

"No, I do not think that the Ethiopians will be in danger from such devices. The airplane will be of value only in open battle and for scouting purposes. It is not a peril to the Ethiopians.

"Their greatest peril is their own impetuosity. If they permit themselves to be detected and enveloped, if they do not confine themselves entirely to guerrilla tactics, the Italians will smash them."

"Have you thought of tanks? How would you meet that menace?"

"I admit, the task is not easy. The modern tank may be compared to the rhinoceros in the days when no bullet could pierce its hide. The heavy armor of the vehicle protects it from guns of considerable calibre.

"But this would not discourage me, if I were the lion of Judah. Under my guidance and the pressure of necessity my few mechanical and chemical experts would quickly perfect an efficient defense - possibly rifles of large bore, adapted to fire charges of mercuric fulminate.

"This is an extraordinarily powerful explosive. The extreme suddenness of its detonation is such that, even if unconfined, it will punch a hole in a thick steel plate.

"The chief difficulty is to prevent premature explosion of the gun barrel. I think this could be overcome by an elastic resistance and slow acceleration, which is practicable as the range can be short.

"The charges exploding in contact with the tank would put the propelling engines and machine gun equipment out of order. My Ethiopians, sallying forth from ambush, would do the rest."

"What will be the outcome of the war - if it comes to pass?"

"This question is easily answered. The Ethiopians must hide in the day and strike in the dark. In doing so, they can prevent the aggressors from achieving the important military results during the present dry season. When the rain comes again, their battle will be half won.

"But we are dealing with a hypothesis. I am still convinced that Mussolini will not dare to embark upon a large-scale invasion of Ethiopia. The price he must pay in equipment and men is too great. He must envisage disastrous consequences to Italy, even in case of victory,

"Should Ethiopia be conquered, it would prove a cancer eating away the substance of Italy. The Italians have never been successful colonizers.

"I perceive more and more clearly that Mussolini is making bold gestures to attain valuable concessions through the mediation of the Peace Conference.

"Holding over the heads of the spineless League of Nations, like a sword of Damocles, the threat of another World War more frightful than the first, he has succeeded in scaring its members, so that they are making ready to deal unfairly with a nation whose only offense is its weakness - a nation that existed before Romulus and Remus were born and maintained its independence for over three thousand years.

"No matter what compromises may be adopted the Ethiopians will rather die than surrender their independence; hence, whether the issue be peace or war, there is much trouble ahead." 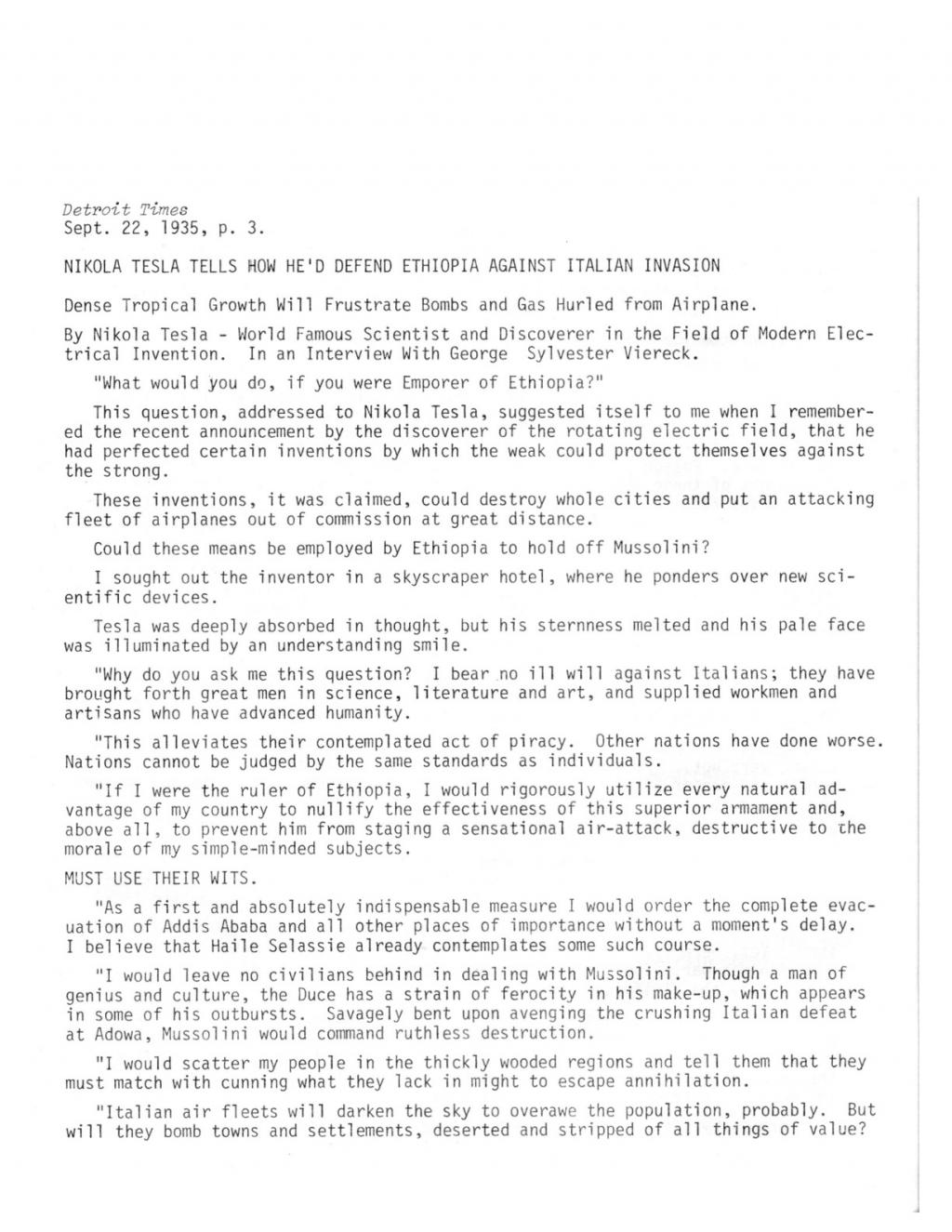