Mr. Tesla and the Czar

The personality of Mr. Tesla is one of the most fascinating in the field of modern invention, and his work is such as to command the interest of both the lay and the scientific public whenever he chooses to give details of his investigations and researches. If he had never done more than develop the theory and practice of the multiphase system, his life would have been useful above the ordinary; and even should it happen that none of his other ideas ever get into practical shape, his discoveries in electricity must always be regarded as important. We cannot number ourselves among those who, like the distinguished scientists, Profs. Brackett and Dolbear, quoted in our columns this week, are impatient with his tendency to let imagination outrun achievement and who virtually class him as a humbug. Mr. Tesla fools himself, if he fools anybody, when he launches forth into the dazzling theories and speculations associated with his name. That he should desire to benefit the human race in ways now unknown, and should avow out loud belief in his capacity to do so, is surely not discreditable, any more than it is unworthy in the head of his own poetic Slavic race to propose the disarmament of the world. Granted that there will still be wars, and granted that all these wonderful visions of new arts in peace do not fructify without the work of a score of later geniuses, why find fault either with the Czar or with Mr. Tesla? Their aims appear wholly noble, their thoughts are beautiful, and if they fail, as they probably will in some material and vital respects, the world is certainly none the worse off for what they actually accomplish.

Just of late Mr. Tesla has been giving publicity to some of his newest work, and it is peculiarly interesting. We should have been glad, personally, to see him finish up some of the many other things that have occupied his energies these ten years past, but none of which now claim any place. For example, his “oscillator,” or combination of generator and steam engine, which was to wipe out all other methods of power generation and reduce vastly the cost of power, by steam and electric economies. The very name is now bestowed by Mr. Tesla on another piece of apparatus, and though illustrated in detail and brought before the Chicago Electrical Congress in 1893, the “oscillator” of the original brand is, for aught the public knows, in the scrap heap. Yet it was a lovely invention, of infinite possibilities. We can only regret its neglect and oblivion, but if Mr. Tesla has other things more appealing to his mind for the present, that is his own business.

Of late also Mr. Tesla has brought forward another plan of power generation and transmission. At one period he expressed his belief in ability to disturb the earth’s charge and thus send currents through the earth. That does not appear to be so feasible or attractive now as the idea of using the upper strata of the air which he says have a very superior conductivity. He would tether up aloft balloons in those strata and deliver to them large quantities of current at such high potential that it would travel economically across the space without wires, say from Niagara Falls to Paris. By this facile distribution of water power, coal and steam would become unnecessary to industry. The new plan may explain why Mr. Tesla has abandoned his old steam oscillator. It is earnestly to be hoped that this novel idea will prove workable. Balloons were a dismal failure in our late war, but that is no criterion, and Mr. Tesla may have some superior gas for inflation and sustentation purposes. It will be remembered that Mr. Marconi has already telegraphed from balloon to balloon, without wires, a distance of over twenty miles, thus proving in advance the tenability of Mr. Tesla’s proposition.

The tremendous hold that war has taken upon the public mind is shown by the fact that even a genius of Mr. Tesla’s independence is compelled to invention in that field. A patent issued to him last week intimates that he believes that torpedos and torpedo boats which were so utterly useless and unmanageable in the late conflict with Spain can be made more valuable if controlled entirely from shore, by a Navy Board, and without any crew. Last spring the ability to explode floating torpedos under ships from a distance without any wires was brilliantly demonstrated at Madison Square Garden several times a day for a month. Taking that idea, Mr. Tesla has applied the same principle to the electro-mechanical steering of torpedos, just as it is now done with several types, but, of course, in his case, without the intervening wires from shore. He is very sanguine that this will stop war, and we pray heartily that it may. The article or patent digest we print in this issue on the subject suggests improvements of his on existing apparatus that may render it, in spite of its great delicacy, able to evade jarring and jolting, the perils of the open sea, the defensive network crinolines around the ships, the concussions of great guns, and the intentional explosion of defenses placed in its way thus to derange and negative its operation. During the late war, apparatus far less sensitive than coherers was rendered useless by the firing of the heavy artillery on the ships, and it must be a preternaturally tough coherer that would escape the same fate. So also it must be a very difficult problem for which Mr. Tesla cannot suggest half a dozen diagrammatic solutions.

While all these curious things are “in the air,” so to speak, it is a distinct pleasure to be able to print, as we do in this issue, Mr. Tesla’s able and thoughtful paper read before the Buffalo meeting of the American Electro-Therapeutic Association. It compensates for the disappointment experienced from his unfinished lecture two years ago before the New York Academy of Sciences, which has never found its way into print, but of which the opening passages indicated the covering of the same ground. We trust that the data given by Mr. Tesla may stimulate our medical friends to greater employment of electricity. It is unfortunately true that disastrous results from injudicious use by some of them of Prof. Röntgen’s great discovery of the X-ray have made medical men fight shy of handling electricity themselves lately, and we do not know whether Mr. Tesla’s experiments will altogether reassure them, so striking and farreaching are they. But the saving of human life is a sacred thing. Every means and instrumentality must be tried by the surgeon and the physician, and it is devoutly to be hoped that having stopped the slaughter due to war Mr. Tesla will revert at some time to this brilliant paper and give the doctors apparatus that will help prevent the slaughter due to accident and disease.

It is not our desire to pose as apologists or publicists for Mr. Tesla. He needs no assistance of that kind; and so long as he commands freely whole pages of the Sunday papers, for which Mr. Wanamaker pays gladly his thousands of dollars, the technical and scientific journals have, indeed, little to do with the matter. All we wish to say is that it is not fair to condemn, as so many do, Mr. Tesla as visionary and impractical. No man has finished his work till he is dead, and even then there are long, long centuries in which his ideas can prove themselves true. The visionaries are thus often, in the end, the most sordid of realists — something Mr. Tesla will never be.

Webmaster Note: This article is included because Tesla provides a response to it in The Electrical World of November 24th, 1898. 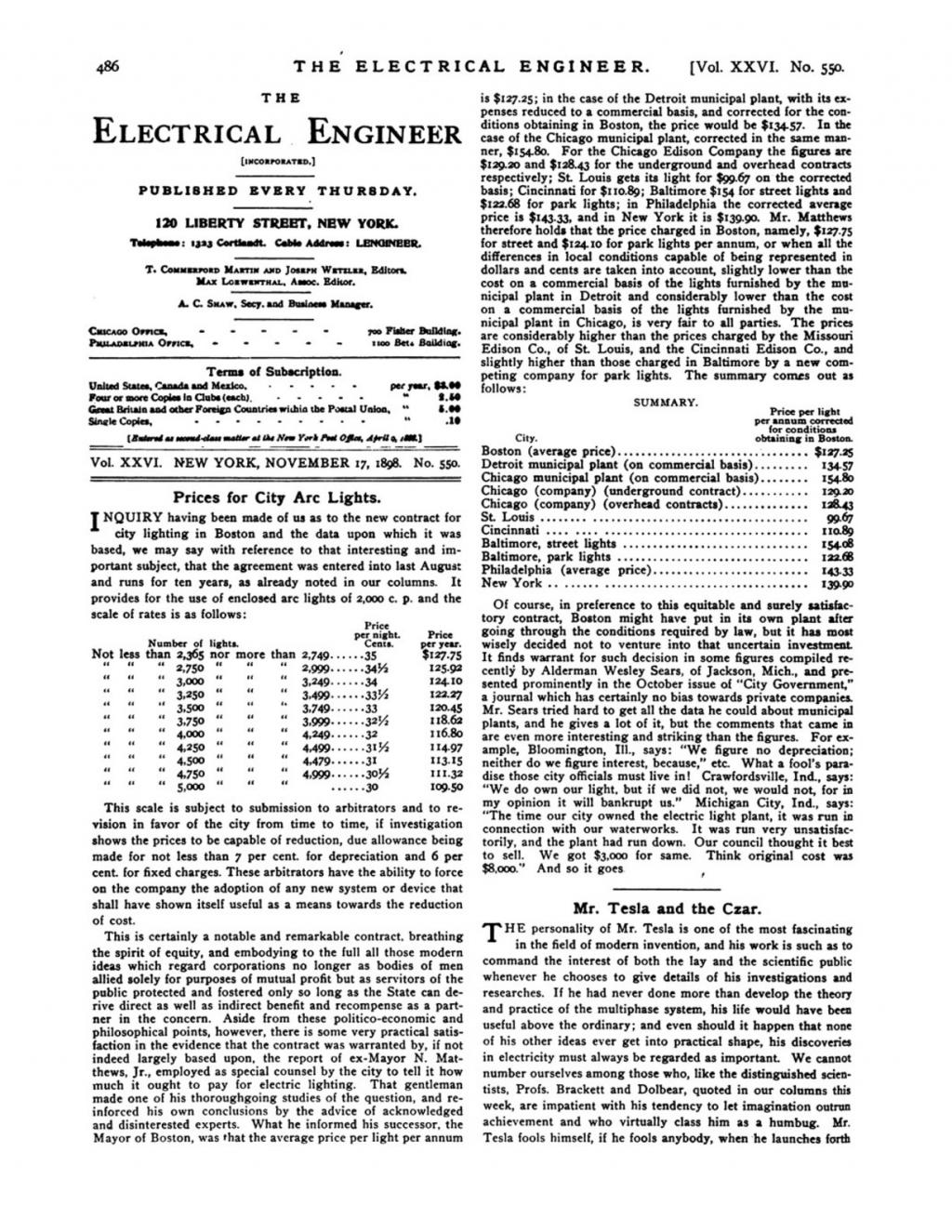