Mr. Tesla to His Friends.

Sir — By publishing in your columns of Nov. 17 my recent contribution to the Electro-Therapeutic Society you have finally succeeded — after many vain attempts made during a number of years — in causing me a serious injury. It has cost me great pains to write that paper, and I have expected to see it appear among other dignified contributions of its kind, and, I confess, the wound is deep. But you will have no opportunity for inflicting a similar one, as I propose to take better care of my papers in the future. In what manner you have secured this one in advance of other electrical periodicals who had an equal right to the same, rests with the secretary of the society to explain.

Your editorial comment would not concern me in the least, were it not my duty to take note of it. On more than one occasion you have offended me, but in my qualities both as Christian and philosopher I have always forgiven you and only pitied you for your errors. This time, though, your offence is graver than the previous ones, for you have dared to cast a shadow on my honor.

No doubt you must have in your possession, from the illustrious men whom you quote, tangible proofs in support of your statement reflecting on my honesty. Being a bearer of great honors from a number of American universities, it is my duty, in view of the slur thus cast upon them, to exact from you that in your next issue you produce these, together with this letter, which in justice to myself, I am forwarding to other electrical journals. In the absence of such proofs, I require that, together with the preceding, you publish instead a complete and humble apology for your insulting remark which reflects on me as well as on those who honor me.

On this condition I will again forgive you; but I would advise you to limit yourself in your future attacks to statements for which you are not liable to be punished by law.

His Friends to Mr. Tesla

One of the foremost electrical inventors of this country, whose name is known around the world, has been kind enough to say that The Electrical Engineer made Mr. Tesla. This is an attribution that we naturally put aside, for it is a man’s own work that makes or unmakes him, but we do plead guilty to the fact that for these ten years past we have done whatever mortals could do to bring Mr. Tesla forward and secure for him the recognition that was duly his. Not only in the columns of this and other journals, but in magazines and books we have striven with all the ability we possessed to explain Mr. Tesla’s ideas. The record is before all men. If there is a line or a word in it that seeks to do Mr. Tesla “serious injury,” we demand its production by him. The man, whoever he be, who says we have ever in word or deed or thought tried to do Mr. Tesla any sort of injury, lies.

Within the last year or two Mr. Tesla has, it seems to us, gone far beyond the possible in the ideas he has put forth, and he has to-day behind him a long trail of beautiful but unfinished inventions. By mild criticism and milder banter, not being able to lend Mr. Tesla the cordial support of earlier years of real achievement, we have only very lately endeavored to express our doubts and to urge him to the completion of some one of the many desirable or novel things promised. We believe this to be true friendship.

For example, take Mr. Tesla’s latest and furthest enlargement of his newest idea, as presented by him in a signed letter in the New York “Sun,” of Nov. 21, unfolding his plan to dispense with artillery of the present type. At this moment we have space only for the following passage:

“We shall be able, availing ourselves of this advance, TO SEND A PROJECTILE, at much greater distance, IT WILL NOT BE LIMITED IN ANY WAY BY WEIGHT or amount of explosive charge, we shall be able to submerge it at command, TO ARREST IT IN ITS FLIGHT AND CALL IT BACK, and to send it out again and explode it at will, and, more than this, IT WILL NEVER MAKE A MISS.”

When we are expected, wide awake and in our sober senses, to accept in silence such an utterance as that quoted above or that which describes as “a possibility” the operation of a distant torpedo boat by the mere exercise of the will, we refuse point blank and we are willing to face the consequences. Our past admiration of Mr. Tesla’s real, tangible work is on record, and stands; but we draw the line at such things as these. We are sorry Mr. Tesla feels it so keenly, but we cannot help it.

Now, as to the specific points raised in the above letter, which Mr. Tesla certainly would not have written had he been well advised. As to the manner in which we came to print Mr. Tesla’s paper, the two letters herewith speak for themselves.

Dear Sir — I was quite surprised to hear on Saturday last from my friend, Dr. Robert Newman, of New York, that the editors of The Electrical Engineer had received no notices of the meeting of our association; I understood that the secretary had sent them. However, in case you might find space to say something of us, I have patched up an article drawn from various sources giving full particulars, which you can cut down to the desired dimensions. I fully appreciate all that you have done for the association in the past, or would not go to this trouble. I also send you a copy of the programme and of hand-book. In regard to latter, I am very sorry that the Buffalo committee had to retain for such a long time the electro of Mr. Tesla which you were so kind as to loan to them through Dr. Newman.

I have to thank you very sincerely for the loan of the electro, and hope that it reached you in good condition.

Messrs. Editors — We have now the necessary vote for you publishing Tesla’s paper in The Electrical Engineer, you lending us the cuts in proper size for our transactions.

The pages of our book are 7½ by 5 inches — if our secretary is not dilatory, you will receive the mss. and illustrations at once. Will call soon.

Yours most truly,
ROBERT NEWMAN.

These show our relations with a deserving association and our efforts to assist its work. We may add as a matter of fact, for which, if necessary, the proofs will be presented, that before printing the paper, we sent Dr. Newman to technical publishers, who refused to print the matter in book form because there was not, in their estimation, sufficient demand for it among scientific men. Failing this, we were undoubtedly glad to give it a place in our pages, as it struck us as good “copy.”

We venture also to direct attention to the dates of the Dickson and Newman letters, one Sept. 26 and the other Oct. 20. The Tesla paper was read on Sept. 15 and appeared in our columns Nov. 17. Does this gap of over two months between reading and publication justify Mr. Tesla’s insinuation that we took swift and mean advantage of him and of our contemporaries? Will anyone produce a letter to show that anyone of our contemporaries ever took the slightest interest in the Tesla paper or even asked for it? If such letters exist, now is the time to produce them. The paper was given to The Electrical Engineer because this journal takes a deep interest in the advance of electro-therapists and has a wide circulation among them, and according to universal custom, the paper once read became the property of the association to deal with as it chose. That, without any particular effort, we should have secured a “scoop” — to use the slang of journalism — is nothing to be ashamed of; we rather glory in it, for whatever it is worth.

It will be noted that we placed freely at the disposal of the association a portrait block of Mr. Tesla which we value highly. We were anxious, however, to do him honor in this way, and loaned the original. Since that time, we have loaned it, without charge, to Mr. Belford, of “Success,” in whose November issue it appears by our courtesy; and we have within the past week placed it at the disposal of another publishing house. Perhaps these are the attempts to do him an injury about which Mr. Tesla has so unfortunately allowed himself to be persuaded.

Now as to the very depreciatory quotations from the distinguished scientists, Profs. Brackett and Dolbear. The passage from Prof. Brackett appeared in the New York “Herald” of Nov. 9. That from Prof. Dolbear appeared in the New York “Herald” of Nov. 10. They had not been contradicted or withdrawn when we called attention to them and objected to them. One of our electrical contemporaries last week quoted them both like ourselves, but said it was inclined to agree with Prof. Dolbear. We now beg to call Mr. Tesla’s attention to the subjoined dispatches from both scientists, and would say that having already expressed dissent from the views of both Profs. Brackett and Dolbear, we do not see how it concerns us any further.

Some of the language on pages 490 and 491 of The Electrical Engineer of Nov. 17, purporting to be quoted from me, is a fairly correct reproduction of what I said to a “Herald” reporter in reply to his question as to the probable practicability of Mr. Tesla’s device for the abolishing war already presented in the “Herald,” a copy of which he showed me.

In the language which you quote, there is much confusion and inaccuracy, due to the fact that the reporter took no notes of what I said, but trusted his memory.

No subject other than that proposed, viz.: Is the proposed plan practicable, was discussed.

Letter received this morning. The “Herald” report was substantially accurate. I will write more to you presently. 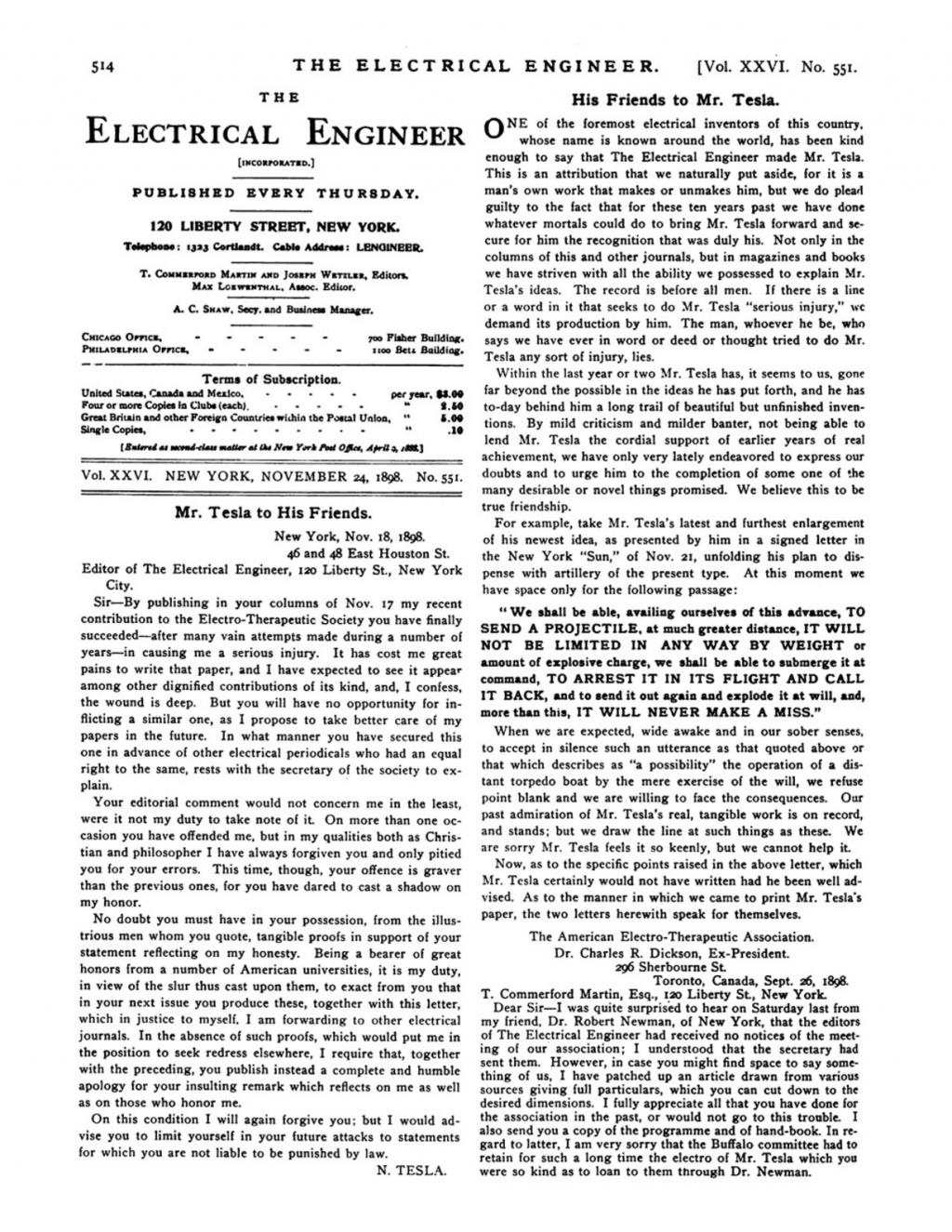