Some weeks ago we gave a short abstract of a paper read by Mr. Tesla on some very beautiful experiments he has been making. His paper, which is now accessible in full, has deservedly caused no little stir in American electrical circles.

Mr. Tesla has had, or perhaps, we may say, has made for himself, opportunities of experimenting on high alternating pressures and high frequencies, such as have fallen to the lot of no other experimenter. To begin with, he had to design a special dynamo to give the frequencies he required - such, for instance, as 10,000, which is what we think Mr. Tesla means by 20,000 alternations per second. He has designed and made three or four machines specially to give these enormous frequencies, and has then entered on a series of interesting and beautiful experiments. Mr. Tesla is sanguine as to the future of high frequencies, but we are somewhat doubtful. A large number of Mr. Tesla’s experiments are old, having been made, perhaps on a somewhat smaller scale, with ordinary Ruhmkorff coils. A Ruhmkorff coil does not, of course, give frequencies of 10,000 a second, but most of the experiments do not really need the high frequencies Mr. Tesla uses.

We are not wanting in appreciation of Mr. Tesla’s originality, nor in enthusiasm as to new things, but we must again protest, as we have once before protested, against Mr. Tesla’s extraordinary habit of advancing as theories or explanations of phenomena, what are either rational theories rendered unintelligible by being oddly expressed, or mere strings of words without clear-cut definite meaning. Before a man has a right to publish new and unorthodox theories, he should have mastered the old and orthodox explanations of ordinary electrical phenomena. For instance, he states: “I adhere to the idea that there is a thing which we have been in the habit of calling electricity..... The electromagnetic theory of light and all facts observed teach us that electric and ether phenomena are identical. The idea at once suggests itself, therefore, that electricity might be called ether...... We must remember that we have no evidence of electricity, nor can we hope to get it, unless gross matter is present. Electricity cannot therefore be called ether in the broad sense of the term; but nothing would seem to stand in the way of calling electricity ether associated with matter, or bound ether; or, in other words, that the so-called static charge of the molecule is ether associated in some way with the molecule.” Then, after some further reasoning, he says, “The spinning of the molecules and their ether sets up ether tensions or electrostatic strains; the equalisation of ether tensions sets up ether motions or electric currents, and the orbital movements produce the effects of electro and permanent magnetism.” Elsewhere he says, “Scientific men still differ in opinion as to whether a charge should, or should not, be lost in a perfect vacuum - or, in other words, whether ether is, or is not, a conductor.” This may not be so incomprehensible to others as it is to us, and we have a constitutional dislike to the framing of inconceivable theory in regard to subjects which are beyond the experience, and therefore the full conception, of any human being. We cannot even form any sort of working hypothesis from Mr. Tesla’s dark sayings. The ultimate constitution of matter has been, and always will be, a subject in which people will delight to speculate in a nebulous and brain-wasting way, and we willingly admit that we can find many more foggy discussions than his nearer home. Moreover, if any part of our mind still remained clear after discussions about ether, we can always have recourse to dissertations on Mind, Right, Chemical Affinity, Duty, Life, or Electrolysis, or we can turn to Dr. Jaeger, and find that, just as ether is indissolubly mixed up with electricity, and is, therefore, the same thing, so disease is the same thing as an uninviting smell.

Passing to less nebulous regions, Mr. Tesla, for instance, inserts a plate of glass between two electrodes, and finds it gets hot. He attributes much of this heating to increased molecular bombardment, and much to the greater specific inductive capacity of the glass, “in consequence of which with the same potential difference a greater amount of energy is taken up in it than in rubber. It is like connecting to a battery a copper and a brass wire of the same dimensions. The wire, though a more perfect conductor, would heat more by reason of its taking more current.” Then elsewhere, on the assumption that a high specific inductive capacity of itself means waste of power, he proposes to use, had it been possible, either a great pressure or a vacuum as an insulator, but does not say why their inductive capacities should be low. We do not wish to collect a series of small blemishes from a long and interesting lecture; in fact, the length of our quotations is already great enough to give the reader a falsely unfavourable impression. We think, however, that any one who has read many of Mr. Tesla’s articles must have felt difficulty in understanding the frequent vague and idiomatic statements with which they abound. We do not think it too much to ask an electrician occupying such a prominent position as Mr.Tesla has gained for himself in America to omit passages that may detract from his reputation, and to allow us to admire him even more. If Mr. Tesla could keep phantom ideas about the electromagnetic theory of light and Hertz and Dr. Lodge out of his work, we feel sure he would make his interesting experiments more clear. The frequencies he uses are far too low for the velocity of propagation of a disturbance to be sensibly finite in comparison with them, and most of the results have been produced by the host of experimenters on discharges. Such suggestions as that relative to the advantages of high frequencies in making ozone commercially may soon be of enormous importance.

Mr. Tesla may be, and we trust is, on the right track when he suggests that the light of the future may be produced by vacuum tubes; but, on the other hand, the subject has been very patiently investigated already by many inventors without any very promising results. 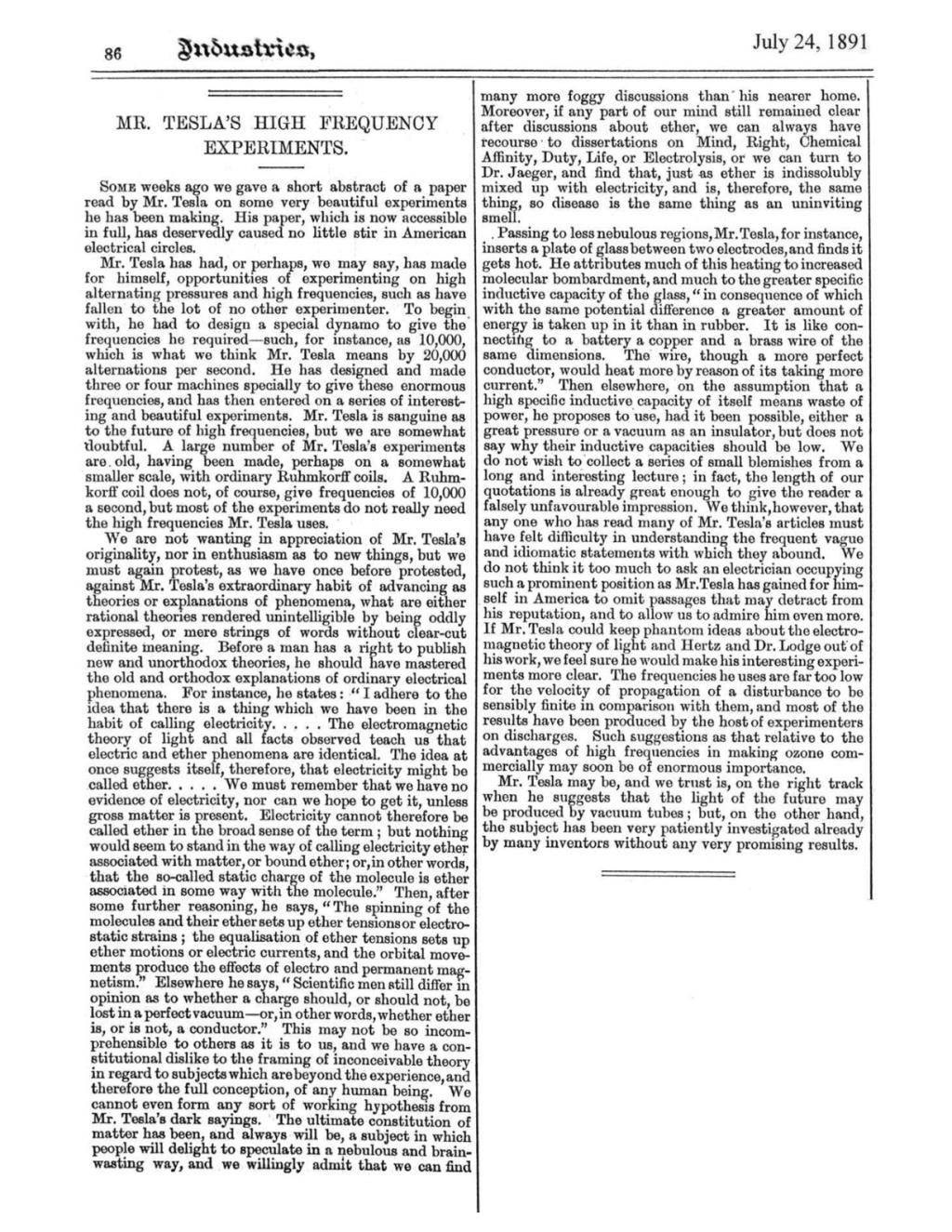