“Were we to eliminate from our industrial world the results of Mr. Tesla’s work, the wheels of industry would cease to turn, our electric trains and cars would stop, our towns would be dark, our mills dead and idle. So far - reaching is this work that it has become the warp and woof of industry.”

So writes Dr. A. B. Behrend in his book on the induction motor - the motor which owes its existence to those studies of Dr. Tesla’s which have proved to be of the greatest intrinsic value to the world of today.

It would seem enough for any man, living or dead - and Dr. Tesla is very much alive - to put him down as a benefactor of the human race. But in this case we have a fourfold personality: Dr. Tesla, the scientist and creator of electrical machinery; Dr. Tesla, the prophet, who goes probably further in definite prediction of what electricity can - and will - be made to do than any other man; Dr. Tesla, the radical, who holds views entirely at variance with many of the long accepted electrical principles; and Dr. Tesla, the individual, tall, spare, with a clean - cut, thin, refined face, and eyes of unbelievable keenness - the most charming of companions, well - read, well - informed on every question of the day and holding very definite opinions in regard to these questions, a wonderful conversationalist and a writer who handles words as surely and accurately as though he were blending a chemical compound.

Nikola Tesla was born in 1857 at Smiljan, Lika, a borderland region of Austria-Hungary.

As the son of a minister, he had naturally been destined for the ministry, a life work which by no means appealed to him. He finally prevailed upon his reluctant parent to abandon this idea, and, since his preliminary schooling was over, to send him to Gratz in Austria to finish his studies at the Polytechnic School with the object of becoming a professor of mathematics and physics.

The idea of a professorship was abandoned, the next year, and Tesla turned his energies towards engineering. He worked in Hungary, in connection with the newly introduced telephone but soon realized that this connection held no future for him. He then pushed on to Paris and became an electrical engineer with one of the large companies in the new science of electric lighting.

As early as 1882 he concentrated on embodying the rotating field principle in operative apparatus. Then and there he would have published his ideas, given them to the world, had it not been for the solicitations of his friends in commercial circles who urged him to form a company to exploit this invention - destined to have so profound an influence on the development of future electrical machinery.

Mr. Tesla met many Americans in France. From them he learned of the real encouragement given in the United States to any inventor who could attain some new and practical result. It was a bold undertaking, but he did not hesitate. Again burning all his ships behind him, he came to America to go to work the very day he arrived at the Edison Works - the goal of his ambition. It is easy to imagine the benefit and stimulus Tesla derived from association with Mr. Edison, for whom he always had - and still has - the strongest admiration.

In this congenial atmosphere his work soon attracted so much attention that he was asked to join a company formed to develop and sell an arc - lighting system based on some of his inventions. He brought this system to perfection and saw it placed on the market, but his thoughts were mostly concerned with his old discovery of the rotating magnetic field principle for alternating current work, and the application of it in those induction motors which have now become known the world over.

Mr. Tesla stood practically alone in his convictions on the subject of the alternating current. Few engineers had ever used it or were even familiar with its essential features. As a matter of fact, Tesla himself did not learn how to construct alternating current apparatus of even fair efficiency until after protracted efforts and experimentation. The proof of his success came in 1887-8 through the test of the distinguished expert, Professor Anthony of Cornell, when he demonstrated that Tesla's motors gave an efficiency equal to that of direct current motors. The final difficulty to be overcome in the construction of these motors was their adaptation to existing circuits, which were all built for direct current in this country. This was successfully accomplished. The Westinghouse people acquired these patents and produced the motor, applying it to different needs.

The first paper given to the world on alternating currents was read by Mr. Tesla before the American Institute of Electrical Engineers in New York, in May, 1888, at the instigation of Thomas Comerford Martin and Professor Anthony. In connection with this paper, he exhibited motors that had been in operation long previous, and with which his belief that brushes and commutators could be dispensed with, was triumphantly proved to be correct.

In 1890 Mr. Tesla left Westinghouse and devoted himself to experimenting with alternating currents of very high potentials and frequencies. Through his thirst to penetrate into the unknown, he was rewarded with results of the most astonishing nature, such as the transmission of electrical energy throughout the earth without any wire, the invention of an apparatus for electrical oscillators of tremendous power, and the transmission of electrical energy to any distance without wires. These things he mentions in an article which appeared in the Century for June, 1900, entitled “The Problem of Increasing Human Energy” - an article that proves Tesla to be one of the deepest thinkers of our time. These results he also set forth in a lecture in May, 1891, which may be said to have marked a distinct departure in electrical theory and practice.

It might be said of Dr. Tesla that he is a fundamentalist in electricity, digs down to the roots and essences of his chosen subject, refuses to accept any conclusion without the closest scrutiny. Certainly some of his views on electricity are radical. For example, he flatly denies the existence of the electron as popularly pictured by science. He claims that it has never been isolated and thinks that some of the investigators have mistaken a hydrogen molecule for an electron.

Perhaps his most outstanding disagreement with generally accepted theories has to do with Hertz waves. Dr. Tesla claims that radio transmitters, as now used, do not emit Hertz waves as commonly believed, but waves of sound. He bases this belief on the fact that as early as 1897 he demonstrated that the ether is a gas which can transmit only waves of sound, that is - such waves as are alternately propagated by alternate compressions and rarefactions of the medium in which transverse waves are absolutely impossible. He claims that Dr. Hertz, in his celebrated experiments, mistook sound waves for transverse waves and that this illusion has been constantly kept up by his followers and has greatly retarded the development of the wireless art. As soon as experts become convinced of this fact they will find a suitable explanation of all the puzzling phenomena of the so - called radio.

Again, Dr. Tesla does not believe in the popular idea of deriving motive power from the disintegration of atoms or change of elements. He holds that radio - activity is due, not to forces in the substances themselves, but to a cosmic ray, the discovery of which he announced in 1897. In simple language, an element like radium emits radiations merely because the cosmic ray impinges upon it, thus producing these secondary effects.

The amazing thing about Dr. Tesla is that he seems to have always been, and still is, ahead of his time. For example: the principle of neon lamps, as they are now used, was discovered by Dr. Tesla thirty years ago, and he even had in operation at that time filamentless, gas-filled electric lamps standardized to 50 candle - power. He predicts that the day of the filament lamp is over and it will be replaced by the light from properly gas filled tubes, which will be more economical, infinitely more lovely, and last forever.

Nikola Tesla’s induction motor, high voltage transformer, and system of alternating current transmission have brought him fame and fortune. Among his inventions which are little known to the public are a radical new apparatus for the wireless transmission of power, bladeless turbines, aeroplanes that rise and descend vertically and the Tesla viscosity speedometer which registers the speed in miles per hour. This speedometer is based on the fact that when one disc is driven by a flexible shaft from the engine transmission the drag of the air particles between the revolving disc and a closely positioned second disc is such that the latter will be turned through part of a circle proportional to the speed of the driven disc. It is only necessary, therefore, to calibrate the second disc in revolutions per minute or miles per hour, to have a perfect speed indicator.

But it is Dr. Tesla, the prophet, who makes us catch our breath in awe - since he is a prophet distinctly with honor in his adopted country, a prophet whose predictions are continually coming true.

Dr. Tesla bases his vast amount of work on wireless transmission and reception, on the marvelous phenomenon of terrestrial resonance, which he discovered in 1899, and on his magnifying transmitter. He considers the whole earth as a huge wire - or conductor - and, having determined its constants in electrical units, he has designed the proper wireless transmitter needed to set the globe into powerful electrical vibrations. According to this theory, if we desire to operate lights or motors, all we have to do is to connect an electrical capacity, such as an antenna, or other conductor, through the apparatus. If this theory is correct, and few engineers will make the positive statement that it is not, we shall have no more power transmission lines; we shall have an electrical capacity, in the form of a ball or cylinder, placed in the attic or ceiling of a house, that, when connected through a Tesla transformer, to the earth, will pick up the desired electrical energy to operate our household devices. A meter may be connected with this arrangement so that the current may be measured and paid for in the usual way to the central station owners.

Dr. Tesla produced artificial lightning displays in his Colorado laboratory forty years ago, that have probably never since been equalled. Hundreds of patents cover his inventions, but thousands of his ideas have never been patented at all, and are recorded only in his private files.

No one knows what he will conceive next, but whatever it is, it will probably be sound in every principle. Tesla's name will go down to posterity as one of the greatest inventors and electrical discoverers of all time. 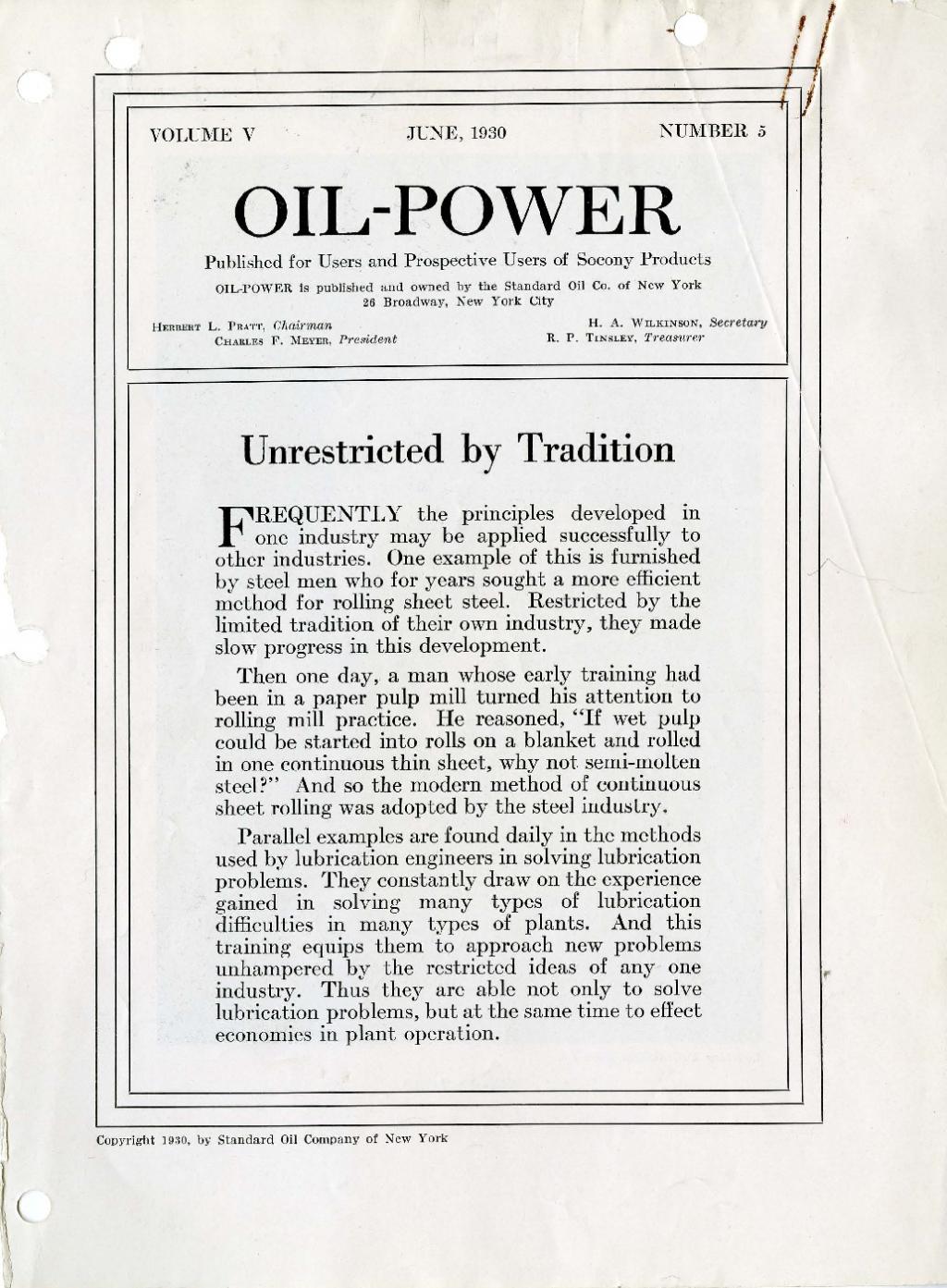