Application of high frequency electrical current has had “highly beneficial results” in cancer treatment, Dr. Gustave Kolischer, of Mount Sinai and Michael Reese Hospital, Chicago, asserted yesterday at the American Congress of Physical Therapy. Dr. Nikola Tesla credited as the first person to introduce electrical oscillation in therapy, corroborated Dr. Kolischer's statement during an intermission in the sectional meetings of the congress, which is holding its eleventh annual session at the New Yorker this week.

“In a great many instances,” said Dr. Kolischer, “its results surpass anything that could be accomplished by the use of the cold knife, and in cases where technical reasons exclude the use of the scalpel numerous favorable results follow the administration of high frequency current.”

Dr. Kolischer pointed out, that the death rate, as an immediate consequence of surgical intervention, is considerably lower in electro-surgery.

“There exists in the body a system of specially endowed cells in which reside practically all the defensive potentialties of the body,” he asserted. “These cells possess the faculty of digesting cancer cells and of neutralizing the harmful products of these malignant cells. It has been found that it is possible to increase the number of defensive cells by stimulating the organs in which they originally grew. Thus one is in a position to draw an increasing supply of these cells their use in the cancer region.”

The science of physical therapy developed a new line of medical specialists during the last fifteen years. These men practice what is know as “physical medicine” - treatment through the various energies rather than by drugs or chemicals. Dr. Victor E. Levine, of Omaha, Nebraska, yesterday, explained their position as "youngsters in medicine.”

“This treatment through the energies adds a pistol to the doctor's equipment for fighting disease,” he said. “He has a sword and a gun in surgery and drugs: Now he is even more completely prepared.

“Physical medicine, as it is now called, is the youngest of all branches of medicine, yet one of the most progressive and important. Everything is based on research. The whole thing centers about the fact that through physicotherapy we are able to substitute electro-coagulation for the knife. We can make an incision which is as accurate as with a knife blade, is absolutely sterile, and hasn’t the danger of profused bleeding which is ever present in ordinary surgery. The specialist in physical medicine merely applies the discoveries of physics to medicine.”

Among the more important weapons used by the physical therapist are the X-ray, the ultra-violet and infra-red rays, radium, and diathermy. The latter is becoming more and more popular among the physicotherapists because through its internal heat it can solve a great many medical riddles that radium, the X-ray or the other rays cannot penetrate.

“In the cure of syphilis or any infection,” asserted Dr. Levine, “the ordinary medical doctrine would be to destroy it by internal heat. This could be accomplished by giving the patient malaria fever, but what would be the gain? In his condition he would probably die from the disease. So what can be done? The physical doctor has what he calls a “fever machine” which heats the body internally but does not injure the patient’s health. The patient actually has an internal fever, the sort he would have if he were ill with malaria. But he does not have the accompanying maladies, and he does not die of the treatment.”

A room, every inch of space occupied by weird instruments on black, shiny cases, displays the varied equipment of the physical therapist on the third floor of the New Yorker. There are lamps and lights for tuberculosis treatment, an important corner in the physical doctor’s consultation room. There is a machine for taking off external blemishes and growths by electricity which will remove anything from a wart to a wen. Or if the patient has pneumonia, particularly pleural - pneumonia, there is a machine which sends high frequency electricity through his body until he recovers.

“More than 90 per cent of human ills originate above the ears,” said Dr. Norman E. Titus, who is director of physical therapy at the Columbia University College of Physicians and Surgeons. “In the days that were the dawn of therapeutics, such forms of treatment as were available were largely used for the psychic effect upon the patient. In the Temple of Aesculatius there was an ante-chamber wherein the patient had to wait until he had a dream that he was going to get well. Only then was he admitted for treatment.

“The sun and water baths and a massage were the main treatments used for pain and diseases in the ancient days, and they are included in what is known today as physical therapy. The medical profession, until not so long ago, considered it far beneath them to touch a patient with a view to alleviating pain. The idea persisted in the minds of the medical profession that only medication could produce results. As the result, many different kinds of cults have prospered because of the fact that so many human complaints were above the ears. The American Congress of Physical Therapy has spent ten years in weeding out these fanatics and their unscientific disciples who have wiggled into the field of physical therapy.”

Dr. William T. Johnson, chief of the department of physical medicine at the University of Pennsylvania Graduate Hospital, gave a paper on “Air Therapy” in which he asserted that people who live near sea level in climates which subject them to extreme variations of heat and cold and varieties of weather are healthier and live longer than those used to uniformity.

“Most people,” said Dr. Johnson, “would be happier if they would permit the physiological regulatory mechanism within the body to protect them from changes in the weather. They should accustom themselves to the stimulating influences of cold weather and cold winds. Protection should come from within, not from without. Most people are too temperate conscious.”

Dr. Johnson doubted the conclusion of some physicians that certain climates which are over - stimulating are undesirable because persons of certain types develop goiter, pernicious anemia, diabetes and mental conditions which result in suicide. He pointed out that frequently such a climate is beneficial for the majority even though some vulnerable individuals succumb.

A method of treating certain types of neuritis of the arm by the action of ultra - violet light was submitted in a joint paper by Dr. Esther Frankel and Dr. Disraeli Kobak, of Rush Medical College, Chicago. They found that constant application of the ultra-violet rays would cause pain eventually cease.

The usefulness of radium in treating the diseases of the cornea of the eye was discussed by Dr. Laura Lane, of the University of Minnesota, who explained her method of removing membranes which often grow over portions of the eye following injuries. These membranes, which are in reality scars and through which light will not come, have been successfully removed with radium treatments at Minnesota, she declared.

Dr. Harold Swanberg and Dr. Arthur E. Perley, radiologists of St. Mary’s Hospital, Quincy, Ill., offered a joint paper maintaining that radium is superior to surgery in the treatment of certain types of cancer peculiar to women, resulting in 60 per cent cures in cases which were treated before the disease hod progressed beyond the point of relief. 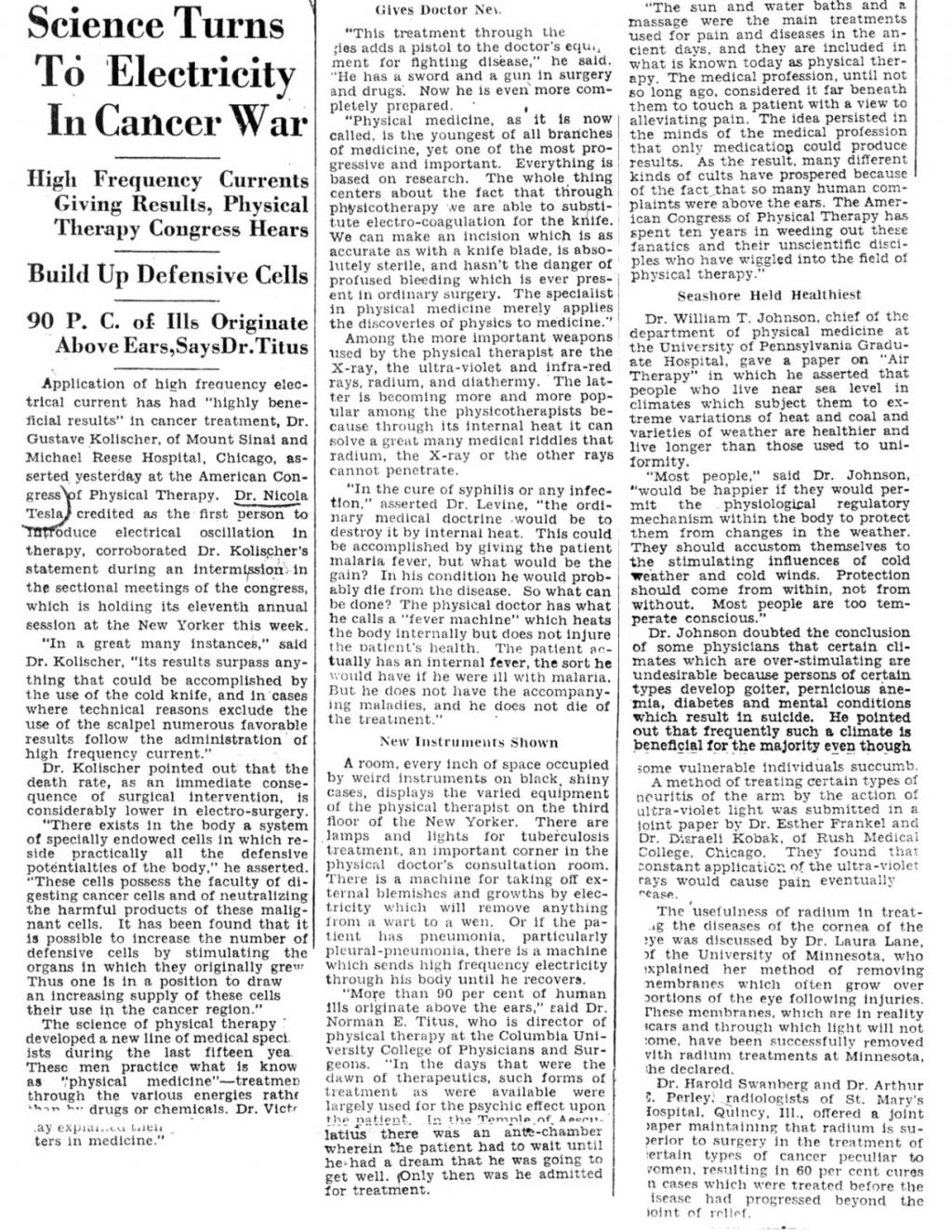