Nikola Tesla and His Museum 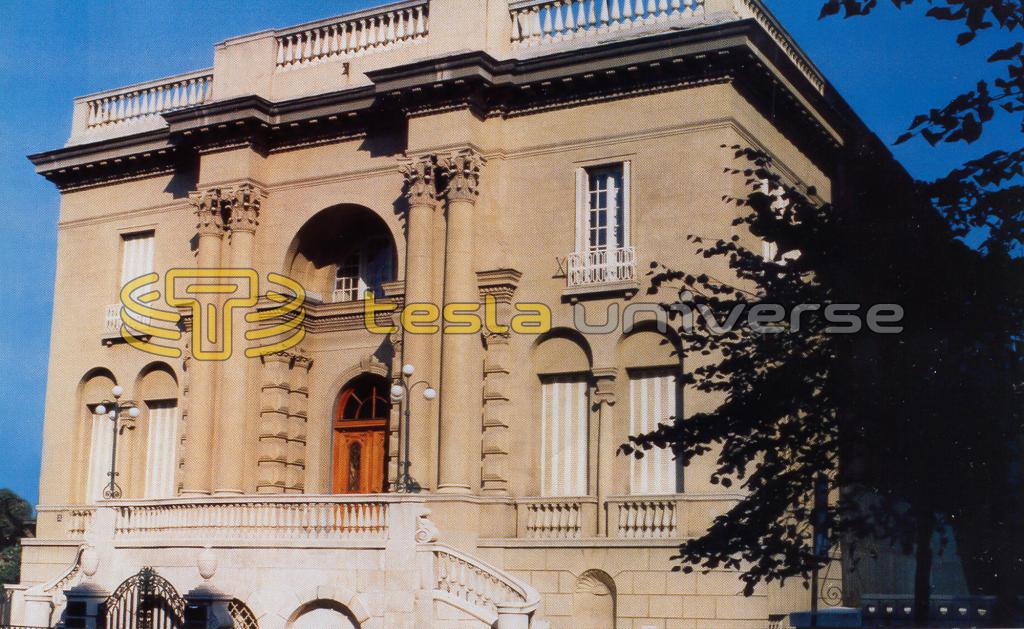 Nikola Tesla, American scientist of Serbian origin, inventor and scholar, lived and worked in the period comprising two centuries. For his biographers, he is “unparalleled genius”, “man beyond his time” or “lord of lightnings”.

Tesla was born on July 10, 1856, in Smiljan (Austrian Empire, today’s Republic of Croatia). He was educated in Smiljan, Gospic, Karlovac, Graz, and Prague. He worked in Maribor, Budapest, Paris, and Strasbourg, before he continued, in 1884, to live and work in New York. He died in New Yorker Hotel suite, on January 7, 1943.

He designed inventions and discoveries in the field of electric engineering (energetics, high voltage engineering, radio engineering, and remote control) and machine engineering. Owing to Tesla’s invention of rotating magnetic field in 1882, the induction motor was made, and new technology of wireless power transmission was introduced, based on application of poly-phase alternate currents.

Tesla’s contribution in domain of high voltage current engineering, radio engineering and remote control, originated from study of high voltage and high frequency currents. In 1891, Tesla discovered a device which will be known as the “Tesla’s oscillator.” Studies of high frequency currents, which he began in 1890, marked simultaneously the beginning of the second stage in development of the radio and of the methods and the devices for wireless power transmission. In 1898, he publicly demonstrated the application of the radio controlled transmission by remotely controlling small boat with radio waves.

In the early 20th century, Tesla realizes his idea on new mechanic principle of turbo generator drive. Operation of these machines was based on the analogy of induction motor and rotating magnetic field.

Thanks to Tesla’s careful custody, despite his frequent changes of locations in which he used to live and work, the legacy is preserved and stored today in the Nikola Tesla Museum. After his death, his property was handed over to the Foreigners’ Property Office, that appointed “Manhattan Storage and Warehouse Company” in New York as location for storing Tesla’s property until further notice.

Sava Kosanovic, the youngest son of Tesla’s sister Marica Kosanovic, became guardian over Tesla’s legacy in January 1943. As a member of Royal Government in exile, Sava Kosanovic arrived in USA in September 1941, and held frequent contacts with Tesla. Since he was appointed guardian over Tesla’s legacy, Kosanovic worked on resolving administrative and financial issues related to the legacy. After the end of World War Two, in 1946 he becomes ambassador of F.P.R. Yugoslavia to the USA and Mexico. Before he left diplomatic service in 1950, he hired a lawyer and resolved all affairs of legacy, which was transferred from the USA on a ship that entered the port of Rijeka on September 30, 1951. Then, the legacy was transported to Belgrade and placed into premises of the Faculty of Electric Engineering and, from June 1952, it is situated in the building of the Museum.

Tesla’s legacy was opened, reviewed and roughly inventoried in July 1952. Sava Kosanovic died in 1956 at Belgrade. Sharlota Muzhar, his years-long assistant, transferred the urn with the posthumous ash of Nikola Tesla from the USA to Belgrade in 1957 and handed it over to the Museum for permanent keeping.

Nikola Tesla Museum was founded on December 5, 1952. The museum building was constructed during 1927-28 as family mansion of politician and businessman Djordje Genčić, after the project of famous architect Dragisha Brashovan. Since the inauguration of the permanent exhibition on October 20, 1955, the Museum has been open to the public.

The legacy of Nikola Tesla is an integral whole consisted of archive material, museum items and bibliographical material, which is stored, processed and studied in three respective sections of the Museum: Archives, Collective Fund and Library.

In keeping with material categories preserved in the Museum, the most common is the archive material (over 95% of total fund). Archive material included in Nikola Tesla’s legacy covers the period from 1882 to 1943, and consists of 156.000 sheets. It is classified into seven groups and follows his life and work, in a comprehensive manner, both chronologically and thematically, in several scientific disciplines.

The need for protection of archive material and rising needs for quick and efficient communication with the end-users affected the choice of the Museum to approach the strategic efforts for archive classification, microfilming and archive material digitalization.

Collective Fund of the Museum

Collective Fund of the Museum contains about 1.200 items divided in 10 collections. Majority of the items originate from Tesla’s legacy. According to its origin, the legacy of Nikola Tesla is made by items which Tesla bought personally or in behalf of his company (as final products or custom made products) or received (as award or gift) and preserved.

Among preserved items from legacy, by the importance of Tesla’s scientific contribution, five items are outstanding: part of collecting cable from Niagara, an instrument for high frequency current medical treatments, eliminator of static electricity, Tesla’s pump and speedometer.

The library is organized in two sections: Personal Fund of Nikola Tesla, consisting of bibliographic material from Tesla’s legacy, and Museum Fund created during the years-long operations of the institution.

Each of the sections contains monographic, serial publications and clippings.

Monographic fund selection of the legacy contains dictionaries and encyclopedias, literary works, engineering manuals, scientific debates, excerpts as well as numerous product catalogues. The serial publications of the legacy, periodicals and magazines include wide spectrum of professional, expert and popular science content, including entertaining and humorous ones. Together with Tesla’s legacy transferred from the USA, there came probably the worthiest part of bibliographic fund - the press-clippings which give an insight into social and scientific context in which scientific work of Nikola Tesla took place.

Permanent exhibition of the Museum was prepared during the period 1953-1955. The author of the conception of the permanent exhibition was the first Manager of the Museum, Prof. Veljko Korac with the selected associates. He confided the selection of technical artifacts for exhibition and corresponding texts with working models to Jovan Surutka, Professor of the Faculty of Electric Engineering of Belgrade, who supervised preparations for project tasks in the Museum, too.

The architectural solution for the permanent exhibition was made by Arch. Slobodan Vasiljevic Macuoka. The exception to it is a room adapted in 1957, designed after Arch. Milan Palishashki’s idea, for the placement of Nikola Tesla’s urn. Exposition area is organized in two divisions. The first part of permanent exhibition follows biography of Nikola Tesla. The second part exposes development of electricity and magnetism sciences before Nikola Tesla’s inventions, and there are exhibited, too, the documents and working models of Tesla’s discoveries which he realized in the fields of electrical and machine engineering. 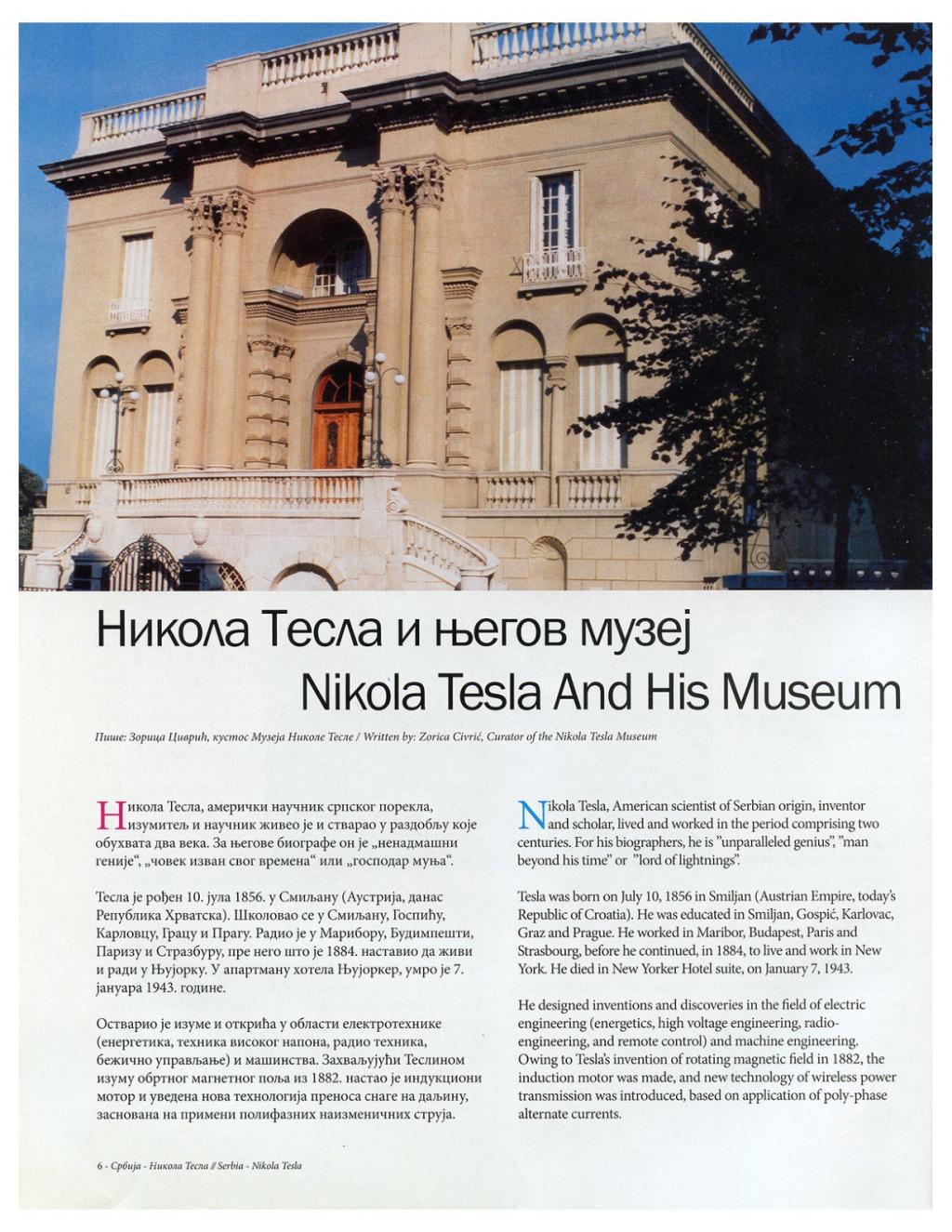