Nikola Tesla and His Works

In the New Science Review Lieut. F. Jarvis Patten gives a sketch of Nikola Tesla, together with a short account of what this distinguished young scientific investigator and inventor has accomplished. Before the advent of Tesla into the scientific field, we learn from Lieutenant Patten that out of both pure theory and physical research the general conclusion had been arrived at “that all manifestations of energy are but the different tangible or apparent evidences of one and the same force; that all energy, whatever its form of manifestation, is simply molecular agitation of greater or less degree.” This being true, it follows that heat and light are merely the results of molecular agitation, and could this agitation be set up by purely mechanical means, heat or light would result. Tesla conceived the bold idea that by causing matter to pass to the stage of luminous vibration, without remaining for any appreciable time in the stage of heat vibration, it would produce light without heat; and, says Lieutenant Patten, “so near has he come to the practical accomplishment of this conception that he has set the scientific minds of all Europe thinking, and placed his name beside that of Hertz.”

Tesla was born in Herzegovina, near the western borderland of Turkey, and in early youth was a pupil of the government schools where he lived. His twenty-third year found him in Paris, whither he had come to study engineering at the Ecole Polytechnique. From this school he went to the Edison Station in Paris as an engineer, and later to the celebrated laboratory near Orange, N.J. He remained with Mr. Edison for several years, but having many ideas that he wished to develop independently, he left that employ, and has since conducted a laboratory of his own in New York, which has been devoted purely to physical research and scientific investigation.

“Mr. Tesla started with the idea of setting matter into vibration at a rate approximating that of light (some two and a half millions a second), with the expectation that under such violent molecular agitation it would emit light. He has not as yet succeeded in obtaining so high a rate, but a much lower one produced some very surprising luminous effects. The general plan at first was this: To construct an alternating current dynamo that would produce this high rate of current alternation or pulsation. This current, now known as the ‘high frequency’ current, will cause luminous effects in different media. Thus, in a darkened room, a bare copper wire conveying such a current will be seen to glow, and vacuum tubes will shine brightly, as a result of a molecular bombardment or agitation of the ether atoms, when such a current is sent through them under very high pressure — the very high electro-motive force of several hundred thousands of volts being used in most of his experiments of this character. The dynamo method for getting very high frequencies was soon abandoned as inadequate, and the oscillatory discharge of a Leyden jar or plate condensers was substituted. This answered much better, although the frequency was then an unknown quantity and quite beyond control; and this departure led to the discovery of some very beautiful electro-static effects, which are still being pushed by many investigators with the hope of arriving at some result of commercial value.”

“Mr. Tesla claims that all electric and magnetic effects are traceable to the action of electro-static molecular forces, and in confirmation of this theory he produces what appears to be a veritable flame by the action of electro-statically charged molecules of gas. A flame is actually shown issuing from the tip of a wand, or from the ends of his fingers, which flame is devoid of heat, and by it no material is consumed. Perhaps the most surprising of the new facts elicited from his investigations is that the shock due to these very high voltage and high frequency currents can be supported by a person without any serious inconvenience. He passes a current of 200,000 volts through his body with perfect impunity, whereas one of 2,000 volts will produce almost certain death from even a momentary shock. In one experiment, two wires are stretched parallel to each other across the room. When given the high tension current they emit streams of light, or brush discharges so profusely that light enough is produced to distinguish objects in the room. If the wires are bent into concentric hoops, one inside the other in the same plane, the annular space between them is filled with streamers that make a sheet of flame a yard or more in area.”

“Mr. Tesla is viewed by some as an impractical inventor — a mere visionary enthusiast — but this is hardly fair to one who has built up an entirely novel method for the experimental investigation of physical phenomena. This method, with its vast array of beautiful experiments, is original, and goes some steps beyond any point reached by previous work in the same line. There seems to be little of practical value in it for the electrical engineer.”

To the practical man of electricity Mr. Tesla stands as the inventor of the rotary field motor, which he brought forth in 1888. Some idea of the importance of this discovery may be had when it is known that the largest electrical enterprise in the world, the 50,000 horse-power plant for sending the Niagara water power to Buffalo and other distant towns, will use the multiphase system that Tesla announced to the world through this motor. 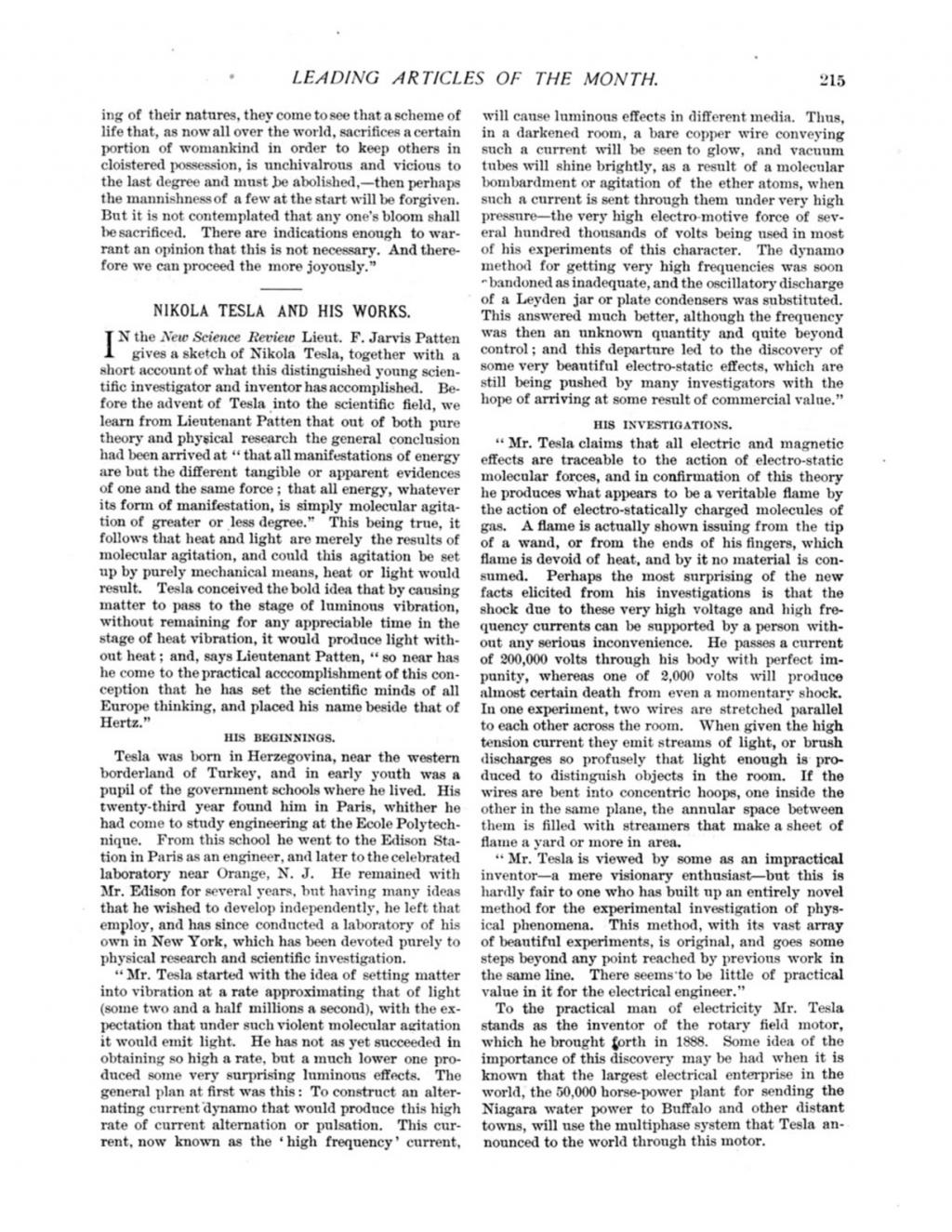