Nikola Tesla, a Bizarra Genius, Is Getting His Due

New York — The world of science is belatedly recognizing one of its most important, eccentric and enigmatic inventors, Nikola Tesla.

A century after he arrived penniless on the docks of New York City, Tesla is receiving credit for achievements that outdid those of his contemporaries, Thomas Edison and Guglielmo Marconi. And more than 40 years after the recluse died in a Manhattan hotel room, in the company of the pigeons who were his favorite companions in the final years of his life, he is being elevated to the pantheon of the world's great inventors.

It was Nikola Tesla, not Marconi, who invented the first radio; it was Tesla, not Edison, who devised the system of electric power distribution now used throughout the world. Working in small laboratories in midtown Manhattan and Greenwich Village, Tesla invented the polyphase electric motor, the bladeless steam turbine and the radio-guided torpedo.

To help publicize the accomplishments of the enigmatic genius, a group of scientists and engineers have formed the Tesla Centennial Committee and recently held a symposium, organized an exhibition and persuaded the governor of Colorado to dedicate August to Tesla. “He helped spawn the industrial revolution,” said Toby Grotz, chairman of the Tesla Centennial Committee and an engineer at Martin Marietta Aerospace in Denver.

Tesla was born in 1856 in Croatia, then part of the Austro-Hungarian Empire, and soon showed a talent for tinkering. In 1884, he took a ship to New York and went to work for Edison, but they parted after a dispute over an invention.

So much for Tesla's conventional history. The centennial committee say he went on to do much more — envisioning and inventing a dazzling array of futuristic devices. “All the literature says Marconi invented the radio.” Grotz said. “But long before Marconi had a patent, Tesla was demonstrating a radio-controlled model boat and talking about transmitting electrical power across the Atlantic. Compare that to Marconi's S-O-S.”

Another example is radar, which employs short wavelength radio signals that can be reflected back from solid objects. As early as 1900, members of the centennial committee note, Tesla suggested that these wavelengths could be used for locating ships at sea.

Many of the 27 speakers at the Tesla symposium, held at Colorado College in Colorado Springs, put their emphasis on Tesla's spectacular experiments at a laboratory not far from the symposium site. There, at the turn of the century, Tesla built enormous coils that generated 10 million to 12 million volts of electricity and sent bolts of artificial lightning flashing 135 feet through the air, although to this day scientists debate what Tesla accomplished. for much of the work was shrouded in mystery.

Margaret Cheney in her book, “Tesla, Man Out of Time,” details some of his eccentricities. At the height of his fame, while eating dinner in the Palm Room of the Waldorf-Astoria Hotel in New York, he would polish the already sparkling silver and crystal using exactly 18 napkins. He had a phobia about germs and a love of numbers divisible by three.

After the death of his mother, Tesla became increasingly eccentric and withdrawn. He never married. Nearly every day he would go to Bryant Park behind the New York Public Library and feed his friends, the pigeons. Late in life he announced that he had received signals from distant planets.

One testimonial to his genius did come in 1917 from B. A. Behrend, an engineer who had an inkling of the mark Tesla would make on Western civilization. “Were we to eliminate from our industrial world the results of his work,” be told a banquet in Tesla's honor, “the wheels of industry would cease to turn, our electric cars and trains would stop, our towns would be dark, our mills would be dead and idle. His name marks an epoch in the advance of electrical science. From his work has sprung a revolution.”

Tesla's laboratory in Colorado Springs was a barn-like structure that sat atop a hill on the prairie and was crowned by an 80-foot (24-meter) tower and beyond that a 122-foot mast. The tall fence surrounding it carried signs reading: “Keep Out — Great Danger” The claps of thunder from his bolts of artificial lightning could be heard for miles.

According to Charles Wright, a retired engineer formerly with the Public Service Co. at Colorado, the laboratory was filled with a host of inventions including, high-voltage transformers, dynamos, coils, capacitor-discharge devices, oil-insulated capacitors and a large metered control panel.

In Colorado Tesla hit upon what he thought was a revolutionary way to send electricity through the air. “Not only was it practicable to send telegraphic messages to any distance without wires,” he wrote of the insight, “but also to impress upon the entire globe the faint modulations of the human voice, far more still, to transmit power, in unlimited amounts, to any terrestrial distance and almost without any loss.”

With the financial backing of J. P. Morgan, Tesla embarked upon a plan to commercialize the discovery, building a 200-foot tower at Shoreham on Long Island. By 1905, however, Morgan had abandoned the project and the tower was never completed.

Tesla, especially in later years, was a man of extraordinary idiosyncrasies and boastful declarations that sometimes sent his science peers into a rage.

At the symposium some of Tesla's advocates seemed to try to outdo the master's knack for hyperbole as they conjured visions of death rays and futuristic weapons. In a paper entitled “Star Wars Now!” Thomas E. Bearden, a retired nuclear engineer and army war games analyst, noted what he said were a number of designs for making weapons based on Tesla's more exotic ideas. The hypothetical devices included what he termed a Tesla howitzer and a Tesla shield that could allegedly stop Soviet missiles.

Tesla suggested in 1940 that the United States military could build a system of death rays that would melt enemy airplanes planes at a distance of 250 miles (400 kilometers). The War Department looked into the idea and said politely, no thanks.

“With Tesla you're always going to get the fringe,” said Robert K. Golka, a physicist who spoke at the symposium. “It's hard to tell what is real and what is not. Tesla will always attract guys with ideas about perpetual motion.”

Tesla's closest living relative, William H. Terbo, a great-nephew, says that four basic types of people are attracted to Tesla — serious scientists, Yugoslavs proud of his achievements. pseudoscientists who pursue some of his wackier ideas and cultists who worship him as an extraterrestrial.

“There are religious fanatics in Pasadena who say he came down on a space ship from Venus,” said Terbo. “It's no small group.” 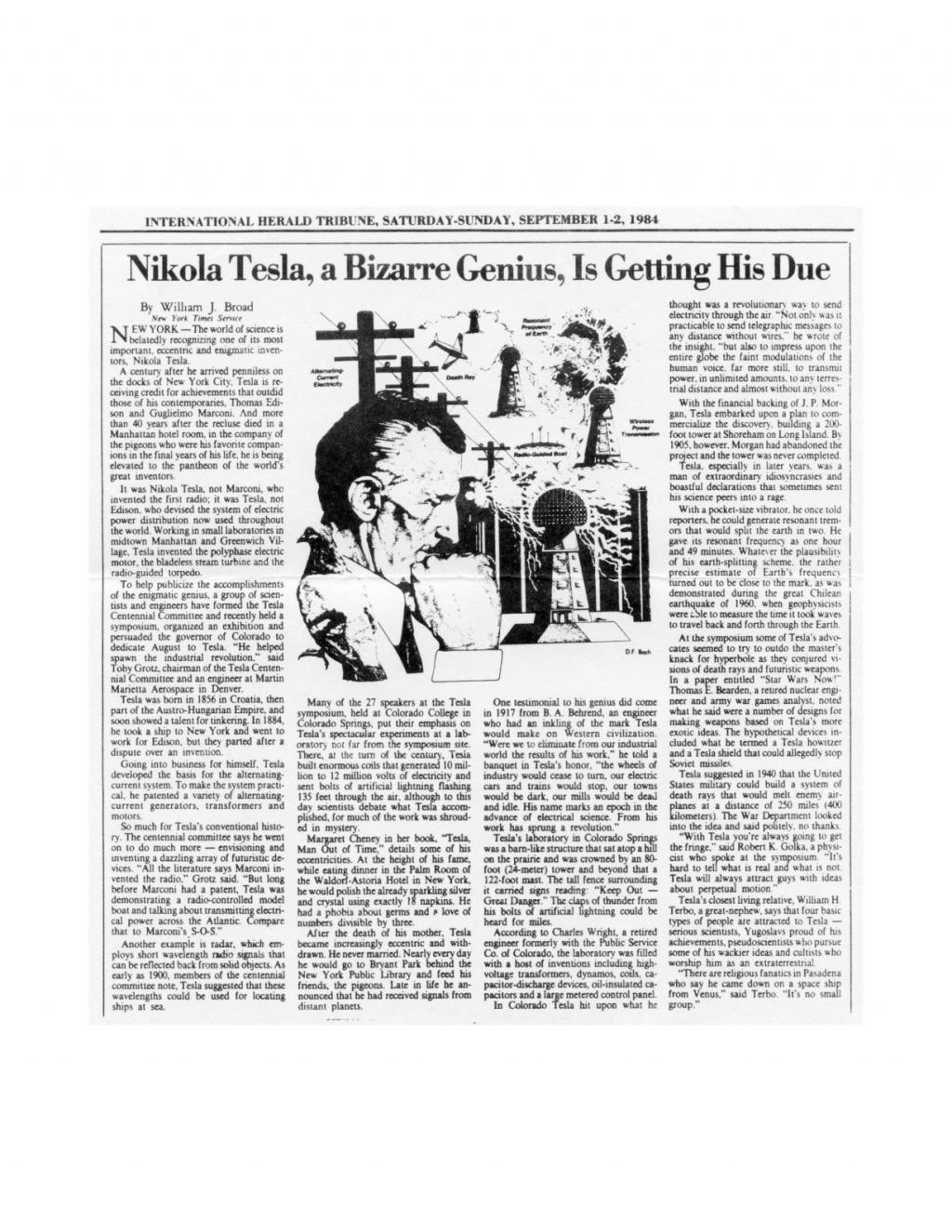