Obsessed with electrifying the earth, Nikola Tesla the electricity wizard, signaled an assistant to close the switch, then jerk it quickly.

There was no short circuit in the Frankensteinesque laboratory on the plains east of Colorado Springs.

Instead, a Madusa-headed fire flowed around the secondary. There was a crackling, a sharp report from the three foot caper ball high above the barn-like building.

Another try convinced Tesla all was ready for the ultimate experiment for which he had arrived in Colorado Springs May 17, 1899 — to prove the possibility of a world wide wireless superpower electrical system.

Tesla walked outside to keep an eye on the copper ball on a staff 200 feet above the laboratory. He looked thinner than usual in full evening attire and about seven feet tall in his boots with the thick insulator soles.

“Close the switch 'til I tell you to open it,” he yelled.

In a few moments, Tesla, the electricity genius, would successfully alter the magnitude of the earth's electrical charge — and blow the facilities of the Colorado Springs Electric Co.!

A utilities bill would be unheard of throughout the world today had the results of Tesla's successful experiments in Colorado Springs not been suppressed by big business back in 1900. In addition, we'd be moving about and working with modern conveniences in perfect harmony with nature.

Tesla proved that to tap the earth's energy for heating, electrical appliances, for lighting, all anyone would need is a 20-foot antenna, a condenser plus a ground connection and a coil — the same simple elements used in a radio receiver tuning unit.

In addition, he foresaw that anything requiring a motor would be operated on a parallel system. In his Colorado Springs laboratory Tesla succeeded in lighting 200 incandescent lamps at a distance of 26 miles as a practical demonstration of his wireless system's workability.

When it came to a choice between Tesla's more efficient worldwide system of alternating current and Edison's direct current system that distributed over wires energy only about 100 miles, the less efficient system won out.

The great financial institutions of the day turned thumbs down on Tesla's alternate system of power transmission when they asked the question “How can we charge for it?” They couldn't; it would have been free to everyone.

Born in 1856 in Yugoslavia, Tesla had the ability to visualize. In his mind he could construct the most complex equipment and be absolutely sure of its function before even one piece was made and put together. This gift led him to his first major discovery which remains today as the foundation of our modern electrical system, the alternating current poly-phase motor.

With that project secured, Tesla in 1899 felt the urge for privacy and space to conduct experiments in the wireless transmission of power — experiments which would be dangerous in urban areas.

To pursue this he chose Colorado Springs in which to build a laboratory, a location he felt was superb for observation of gargantuan lightning displays and electrical storms.

“I plan to send a message from Pikes Peak to Paris,” Tesla told local newspaper reporters who turned out to meet his afternoon train.

He liked Room 207 at the Alta Vista Hotel — the number was divisible by three, there was a view of majestic Pikes Peak and a fine display of lightning storms over the mountains.

Tesla had a loan of $30,000 from John Jacob Astor and $10,000 from a dry goods merchant, M. Crawford. Adding to his good fortune was the influence of a local attorney friend, Leonard E. Curtis, who secured for Tesla's laboratory free service from the Colorado Springs Electric Co.

Tesla set about designing the proposed laboratory to which special equipment would be shipped from New York. A drab, barn-like structure, the laboratory was 100 feet long and 25 feet wide with a roof that sloped from the center, according to one writer. A wooden pyramidal tower from below the center extended to a height of approximately 80 feet and served as an anchor for a 200 foot mast on top of which was a three foot copper ball connected by a wire to the laboratory's electrical apparatus. With respect to local winds, Tesla braced the walls on three sides.

A few residents strolling past the laboratory noted it was a weird contraption, according to Inez Hunt and Wanetta Draper in their book, “Lightning in His Hand.” It had a roof that could be rolled back and they observed that the copper ball obviously was not for decoration.

By mid-July this structure of awe and mystery stood isolated on the prairie pasture east of the Colorado School for the Deaf and the Blind, the location seeming to Tesla ideal for transmitting from mountain to prairie and back again.

At one end of the laboratory was the secondary coil of a giant Tesla transformer which he called a “magnifying transmitter.” Its primary coil buried beneath the floor was 51 feet in diameter and wound with heavy copper bars.

Few residents, however, got inside the laboratory area to view the equipment, according to Hunt and Draper: “He was dealing with such a concentration of power that could kill in an instant he showed no mercy to fools who insisted on rushing in. At times the very grass seemed to crackle with electricity and sparks an inch long could be drawn from the water hydrant at a distance of 300 feet from the laboratory.”

The forbidding atmosphere was augmented by a fence with notices in large black letters that warned, “Keep Out — Great Danger!”

When the time came in mid-July to test the apparatus Tesla set it in motion and pumped electricity into the earth. He drew it out at the rate of 150,000 oscillations per second which produced wave lengths of about 7,000 feet.

The process this produced is described by John J. O'Neill in his book “The Life of Tesla”:
“When the moving waves expanded outward from Colorado Springs they traveled in all directions in ever-increasing circles until they passed over the bulges of the earth, and then in ever smaller circles and with increasing intensity converged on the diametrically opposite point of the earth — a trifle to the west of the two French islands of Amsterdam and SI. Paul, in the area midway between the southern tip of Africa and the southwest corner of Australia.

Here, a tremendous electrical south pole was built up marked by waves of great amplitude which rose and fell in unison with Tesla's apparatus at its north pole in Colorado Springs. This sent back an electrical echo from the south antipode to Colorado Springs producing the same effect but a mite weaker.

Just as it arrived back in Colorado Springs, however, the oscillator was working to build up a wave that would re-enforce it and send it back more powerfully than before, This performance would be repeated continuously.”

The coils in his laboratory, perfectly tuned to vibrate electrically in resonance with the surge of energy, built up potentials of more than 100,000,000 volts. No scientist has ever succeeded in building up currents with even one-tenth of this potential since that time, according to O'Neill. He used only about 300 horsepower to charge the earth to produce his tremendous voltages. His magnifying transmitter threw out such great power that light bulbs within 100 feet of the laboratory glowed whether they were turned on or not. Sparks from this man made lightning were more than 135 feet in length.

He had quickly proved that the earth is an electrically charged body with an extremely high potential plus a mysterious ability to maintain its voltage.

Previously Tesla had produced high frequency waves through electric resonance in his wired circuits by tuning the electricity. Now, according to one historian, he discovered that the same effect could be reproduced with the earth itself acting like a huge single condenser and coil combined. By charging it and discharging it rhythmically with high frequency, high potential oscillations, the entire earth could be set in electrical resonance thus distributing its energy waves throughout the globe.

Tesla also discovered that the earth had a built-in inhibitor making true resonance impossible. Without this the earth would have disintegrated into pieces during his local experiments. To obtain practical resonance and in perfect control of the situation, man needed only to supply the amount of energy lost through earth's natural electrical resistance.

The time to test his theory had come, the equipment was ready and Tesla had removed himself to the outside of the laboratory. Again he ordered his assistant to close the switch until he signaled him to open it.

“The crackling and snap repeated and then came a tremendous upsurge of sound as the power buill up,” according to Hunt and Draper. “There was a crescendo of vicious snaps from above. The noises became machine-gun staccato, then roared to artillery intensity. Ghostly sparks danced a macabre routine all over the laboratory. There was a smell of sulfur that might be coming from hell itself. A weird blue light spread over the room. Flames began to jump from the ball at the top of the mast — first a few feet long — then longer and brighter  thicker, bluer.

“More emanations until they reached rod-like proportions thick as an arm and with a length of over 130 feet. The heavens reverberated with a terrific thunder that could be heard 15 miles over the ridge to Cripple Creek.”

Suddenly, the account continues, the inferno ceased with dramatic silence.

There had been a power failure. Tesla made a frantic call to the Colorado Springs Electric Co. pleading with the men on duty not to interfere with his experiments.

“You've just plunged the town into darkness and ruined the generator!” an irate voice told him. “That's the last free power you'll get from this electric company!”

The electric genius left Colorado Springs on Jan. 13, 1900, returning to New York with plans for establishing a world radio broadcasting station. But plans never materialized because construction problems proved more costly than had been anticipated.

Tesla's Colorado Springs laboratory stood for several years, eventually to be torn down. Its contents were sold following a suit to pay employee wages and unpaid bills. 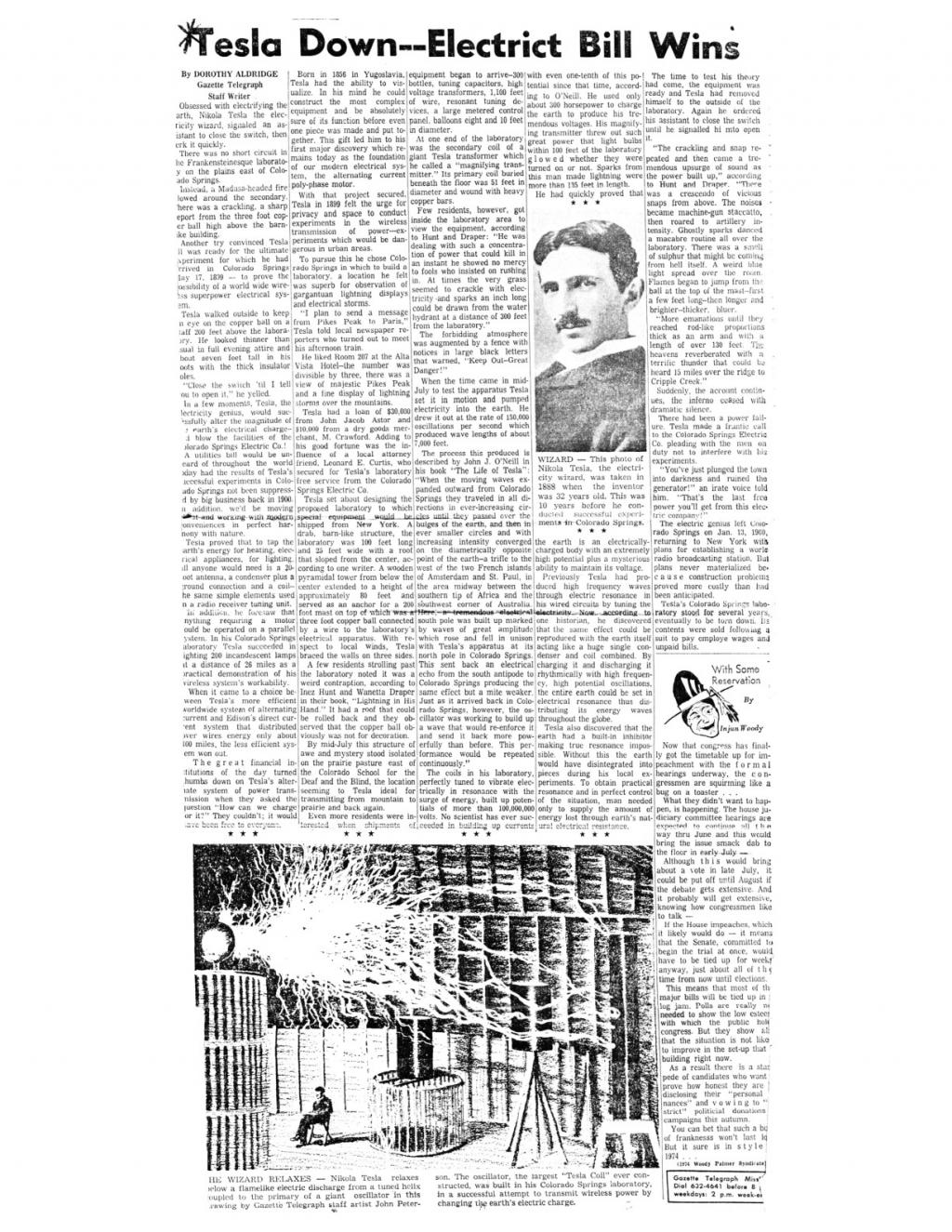