Nikola Tesla Contributions to the Development of Radio

Soon after Nikola Tesla finished his main research in the field of low frequency alternating currents, somewhere around 1890, he intensified investigations into higher frequency alternating currents. In his famous lecture before AIEE in 1891 at Columbia College1, and even much more in his next lecture in 1892 held in London2 and repeated in Paris, Tesla disclosed his research in the field on high frequency and high potential alternating current. In a series of attractive experiments, he explained the behaviors of high frequency currents and their possible use in electrical lighting because it is more economical and produces more natural light than the light of an ordinary incandescent lamp. Tesla’s coil appeared for the first time - the resonant transformer in combination with a spark gap, acting as the high frequency, high voltage generator. This apparatus soon became a part of every physics laboratory, and is a common item even today. Another attractive experiment of Tesla’s was with “tubes devoid of any electrodes,” which, in his words, could produce “sufficient light to read by. The light effect is, however, considerably increased by the use of phosphorescent bodies such as yttria, uranium glass, etc.” Tesla never patented such tubes, but obtained patents on special single electrode tubes with a spherical radiating button.

Throughout his life Tesla several times referred to his bulb, made sometime in 1892, which when excited produced a brush “of extreme sensitiveness to electrostatic and magnetic influence.” He thought it might find use in telegraphy. Many other aspects of vacuum tubes were discussed by Tesla, especially in his 1892 lecture which even today one can read with great interest and can disclose, depending on his background knowledge, the essence of many future discoveries. To illustrate this we mention here Tesla’s single conductor covered with dielectric which he suggested to be used for very high frequency current transmission at large distances! This type of transmitting device resembles Goubau wire, the dielectric covered conductor waveguide, studied many years later3. Tesla also suggested that gas companies may be interested in developing a technique of transmitting high frequency currents through metal tubes as he found that metal would behave like an insulator and gas as a good conductor for high frequency currents. This arrangement we know today to be a type of surface waveguide which supports guided waves.

In February 1893, Tesla delivered a lecture “on light and other high frequency phenomena” before the Franklin Institute, Philadelphia, and before the National Electric Light Association in St. Louis in March. This lecture is very important for the history of radio, especially because it has never been fully appreciated by many historians. One can find partial explanation of why this was so in Tesla’s lifestyle. He was, as a historian of radio wrote, an “inveterate romantic, always ready to identify what was with what should be.”4 It was mentioned by many who knew Tesla’s work that one found Tesla’s name associated with important inventions in radio in the early history of radio technology, but as the years passed, his name was hardly mentioned after 1915. In 1943, Wheeler5 stated that Tesla “is entitled to either distinct priority or independent discovery of:

Tesla attempted to realize a practical system, with the financial assistance of J. P. Morgan around 1900, but then began to slow down his research and soon he was outside the main developments in the field of radio. When Morgan learned from Tesla’s letter that his Long Island Laboratory had been intended to be not only the World Radio Center, but also an experimental station for his wireless energy transmission, Morgan stopped any further support to Tesla. In spite of all of Tesla’s efforts to persuade Morgan to continue financing, “no more advances”.was the typical answer which would be sent by J. P. Morgan.

At the time of this disaster for Tesla’s research in the field of radio, he already had several important patents such as the integrate and damp receiver (as we would call it today)6, double-circuit selective space telegraph system7, which is in fact a kind of so-called “spread- spectrum system,” and a patent on a radio controlled boat8, in addition to a set of basic four tuned circuit patents applied in September 18979. To obtain the latter patents, Tesla had to perform an experiment before the Examiner in Chief of the U.S. Patent Office. This was concluded from an original slide found in Nikola Tesla Museum, Belgrade (see Figure 1). These patents are important for the history of radio, as they were subjects of a long lawsuit with the Marconi Wireless Telegraph Company of America, who alleged Tesla had used wireless devices that infringed on the Marconi patent no. 763772 of the 28th of June, 1904. After twenty-seven years, the United States Supreme Court in 1943 invalidated the fundamental radio patent of Marconi as containing nothing which was not already contained in patents granted to Lodge, Tesla and Stone10.

In 1899, Tesla went to Colorado Springs, where he built an experimental station with a huge spark gap transmitter. For several months he experimented with various transmitter and receiver arrangements and wrote notes which were published in 1978 by the Nikola Tesla Museum11. It is interesting that this work was referenced in 1974 by J. R. Wait in his Introduction to the Special Issue on Extremely Low Frequency (ELF) Communication12, where it was stated that “many of Tesla’s early experiments have an intriguing similarity with later developments in ELF communications.”

Returning from Colorado Springs, Tesla was at his peak. Everything seemed to him to work perfectly, especially after he obtained support from J. P. Morgan for his new laboratory to be built on Long Island. This he intended to make the World Radio Center and started to collect machines and other equipment. He managed to build a house, which stands today, and almost finished a huge antenna tower. However, he ran out of money and, as we explained earlier, his sponsor refused further support: “a factor here was Marconi’s successful demonstration in 1901 of transatlantic signal transmission using much simpler and far cheaper instrumentation.”12 Tesla continued for some time to fight and look for other sources of finance, but after several years he had to stop his further work on the Long Island plant. Meanwhile, he submitted a patent on something that resembles his tower feed13, but it took twelve years to obtain the patent. In the Archives of Nikola Tesla Museum in Belgrade, we have discovered several drawings which are obviously prepared to be patent documents, but we do not know whether they were refused or never submitted. These drawings show antennas, or perhaps probes, to be driven with a low frequency generator in order to excite a standing wave on the earth (Figure 2). There are also a number of pages concerning his work in the Long Island Laboratory, as well as many typed pages with explanations of Tesla’s wireless energy transmission. Unfortunately, notes from Long Island are not as systematically written as the Colorado Springs Notes, but they are certainly interesting to read. They show the great difficulties with which Tesla had to cope in trying to explain various phenomena with a limited knowledge and a stubbornness to stick to his “disturbing electric charge” theory. It is fascinating, however, that Tesla managed to predict the existence of standing waves, and even to calculate the Earth resonance on the basis of his simple 1/4 model. He calculated the basic Earth resonance to be 6 Hz14. He predicted further resonances at 18 and 30 Hz. Today, we know these resonances as Schuman resonances15, which were calculated in 1952 and measured in 1962. Measured values are around 7, 14, and 21 Hz. These measurement results are obtained from the power spectral density of the horizontal magnetic field density. The resonances are observable only when the atmospheric noise level at the measuring site is low. In his St. Louis lecture in 1893, Tesla explained how one could measure this with a generator, but neither he or anyone else, until today, seem to measure the Earth resonances this way. Problems with the direct measurements are obvious if we imagine measuring resonances of a huge resonator with a very small transmitting probe and a relatively closely spaced receiving probe!

Today we have a relatively well developed theory of propagation of ELF in the Earth-ionosphere cavity. Calculations clearly show that for a vertical current source (as proposed by Tesla), the principal field in the Earth-ionosphere waveguide standing wave behavior is obvious (see Figure 3). In a way, this proves Tesla’s “theory” that at ELF the field will be weakest at the equator, and stronger as we approach the antipode. Of course, Tesla’s estimate that the Earth is so huge that it will be of negligible resistance is not correct to the extent that one can ignore it, but we see that several resonances are the reality. Tesla was aware of antenna problems as we can see from his 1897 patent:

and we may say that it is a great pity that he could not perform experiments with ELF which would have lead him to be more realistic in his expectations. Tesla’s efforts to mentally develop a wireless energy system with limited scale experiments and insufficient theoretical knowledge proved that mere genius cannot overcome the weakness of such an approach.

Fortunately for mankind, Tesla not only thought about his wireless system, but devoted his genius to developing some interesting and valuable inventions in the mechanical engineering field, which covered at least his next twenty years of active research.

Until his death fifty years ago, Tesla continued to work, but as far as we know, no significant inventions originated from this period of his life.

The scientific community has not forgotten Tesla and his work, and numerous gatherings were organized to celebrate his anniversaries in the USA, Yugoslavia and some other countries in Europe. The IEEE Power Engineering Society has delivered the Nikola Tesla Award yearly since 1976 to the electrical engineer who has made a significant contribution to power engineering. There is also the Nikola Tesla Award given by the Nikola Tesla Fund in Serbia.

Abridged form of the lecture delivered before Yugoslav IEEE MTT Chapter on July 8, 1993, in Belgrade. The lecture was given in remembrance of the fiftieth anniversary of Nikola Tesla’s death. 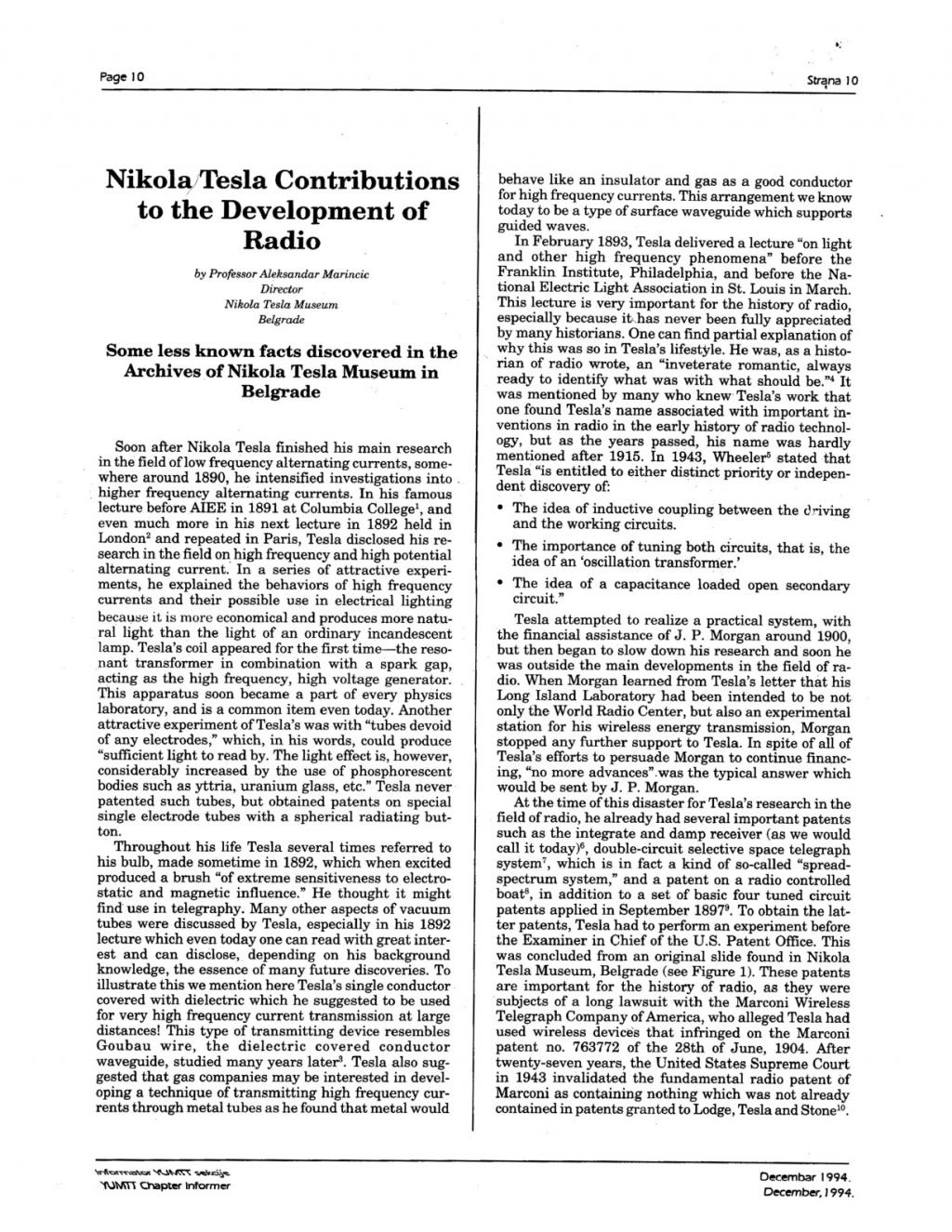