Superman of the Waldorf

Time
The late NikoIa TesIa was a spectacular eccentric scientist and showman. Sure that his name will outlive Thomas Edison’s, Tesla’s admirers hold that he and Michael Faraday were the greatest electrical discoverers of modern times. Last week one admirer, who according to the inventor himself understood him “better than any man alive,” published the first Tesla biography — Prodigal Genius (Ives Washburn; $3.75). The author: John J. O’Neill, science editor of the New York Herald Tribune.

O’Neill, throwing off journalistic reserve, describes Tesla as “a superman — unquestionably one of the world’s greatest geniuses.” O’Neill credits him not only with inventing the polyphase alternating current generator and Tesla induction motor, which scientists generally have hailed as the basis of “our electrical power era” (Time, July 20, 1931), but also with discovering the basic principles of the radio, radar, electronic tube, X ray, fluorescent light, electron microscope, rocket bomb, etc. All these and the discovery of cosmic rays besides, says O’Neill, were inspired by basic Tesla findings. Less ardent admirers do not go so far: they classify many of Tesla’s “discoveries” as mere hunches, lacking in scientific documentation. A fantastically secretive worker, Tesla published little specific data on his researches.

June Bugs and Generators. Tesla had the fictional earmarks of genius. He was humbly born (in a Croatian village now part of Yugoslavia) of a preacher father and illiterate mother who loved to invent household gadgets. Nikola invented a popgun and a water wheel at five; a 16-bug-power motor (operated by June bugs glued to the arms of a tiny windmill) at nine; a “vacuum motor” at twelve; his famed alternating current generator at 25. This came to him while he was reciting Goethe’s Faust one day in a Budapest park; he promptly diagrammed it in a dirt path with a twig.

When European engineers dismissed his invention as incredible, Tesla sailed for Manhattan and went to work in Edison’s laboratory. The two did not hit it off; Tesla insisted that alternating current was the thing for power; Edison stuck stubbornly to direct.

Tesla, who considered Edison a mere inventor, not a scientist, quit in 1885 when Edison refused to pay $50,000 Tesla thought he had been promised for his work. In 1912 Tesla refused the Nobel prize because it was to be shared with Edison. Only after long argument was Tesla prevailed upon to accept the Edison Medal for his achievements in 1917.

For his alternating current system, Tesla eventually got $1,000,000 from Westinghouse. By his biographer’s account he later gave up his rights to millions more in royalties to help his friend George Westinghouse out of a financial hole. Soon afterward Tesla lost everything when his Manhattan laboratory in South Fifth Avenue (now West Broadway) burned down. According to O’Neill, Tesla created some 200 inventions, but he dismissed most of them as “small-time stuff” ‘and failed to develop them, letting others pirate his work.

Tesla concentrated on larger projects. The most grandiose: a scheme for the wireless transmission of electric power. He proposed to charge the earth with tremendous voltages and make it “oscillate,” thereby making it possible to tap electricity from any part of the globe. At his famed electrical tower in Colorado, Tesla produced a potential of 135,000,000 volts (still the highest ever achieved) and claimed that he lit 200 incandescent bulbs 26 miles away with wireless power.

Twain and Pigeon. Tesla’s experiments, few of them ever finished, were financed by such backers as J. Pierpont Morgan, John Jacob Astor, John Hays Hammond, Thomas Fortune Ryan, Samuel Insull. During the last 20 years of his life, Tesla holed up in a Manhattan hotel room, dreaming of bigger & bigger projects. Before his death last year at 86, he had announced that he was on the verge of: 1) inventing a death ray, 2) communicating with other planets.

O’Neill does nothing to tarnish the lustre of Tesla’s eccentricity. A meticulous dresser, he never used a handkerchief or collar more than once, could often be seen in white tie & tails feeding pigeons on the steps of the 42nd Street library or St. Patrick’s Cathedral. Because of an intense germ phobia, he never shook hands if he could help it.

At meals in his hotel, two dozen napkins were stacked, by his orders, on his table; with them he wiped every dish and piece of silverware as it came from the kitchen. In his heyday, he lived at the Waldorf-Astoria and had a fabulous reputation as a host. He invariably took his guests to his laboratory and treated them to an electrical display, which included the then startling trick of passing 1,000,000 volts through his body.

A few days before he died, Tesla sent a messenger with an envelope addressed to “Mr. Samuel Clemens, 35 South Fifth Street, New York City.” Inside the envelope was a blank sheet of paper wrapped around $100 in $5 bills. No one could persuade Tesla that his old friend Mark Twain was dead. Cried he: “He was in my room, here, last night.”

The Author. Like his subject, Author O’Neill is something of a mystic, interested in spiritualism and the Society for Psychical Research. A onetime printer’s devil, he was a page in the New York Public Library when he met Tesla, began to read the scientist’s books and became a science reporter. For his coverage of Harvard’s Tercentenary in 1936 he won a Pulitzer Prize. 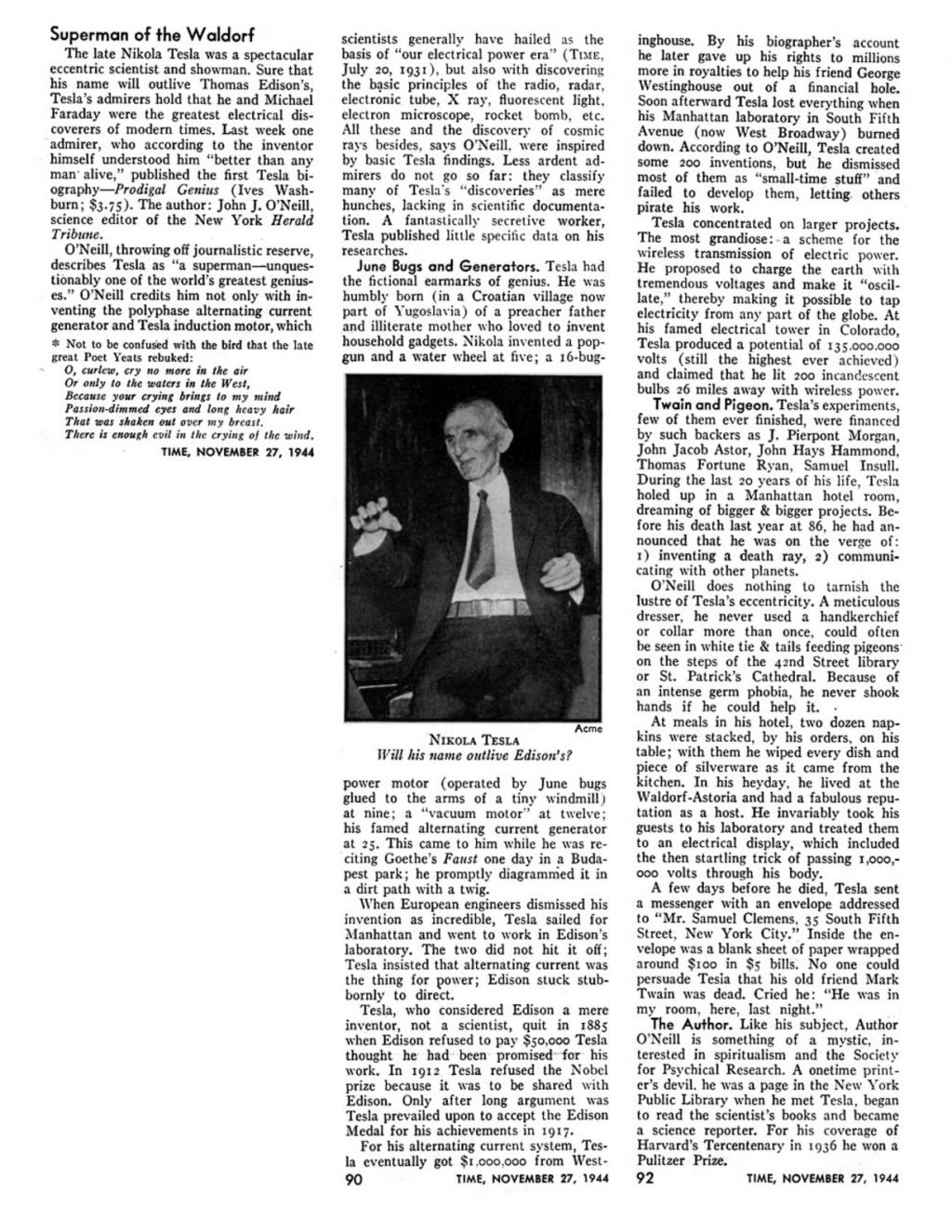