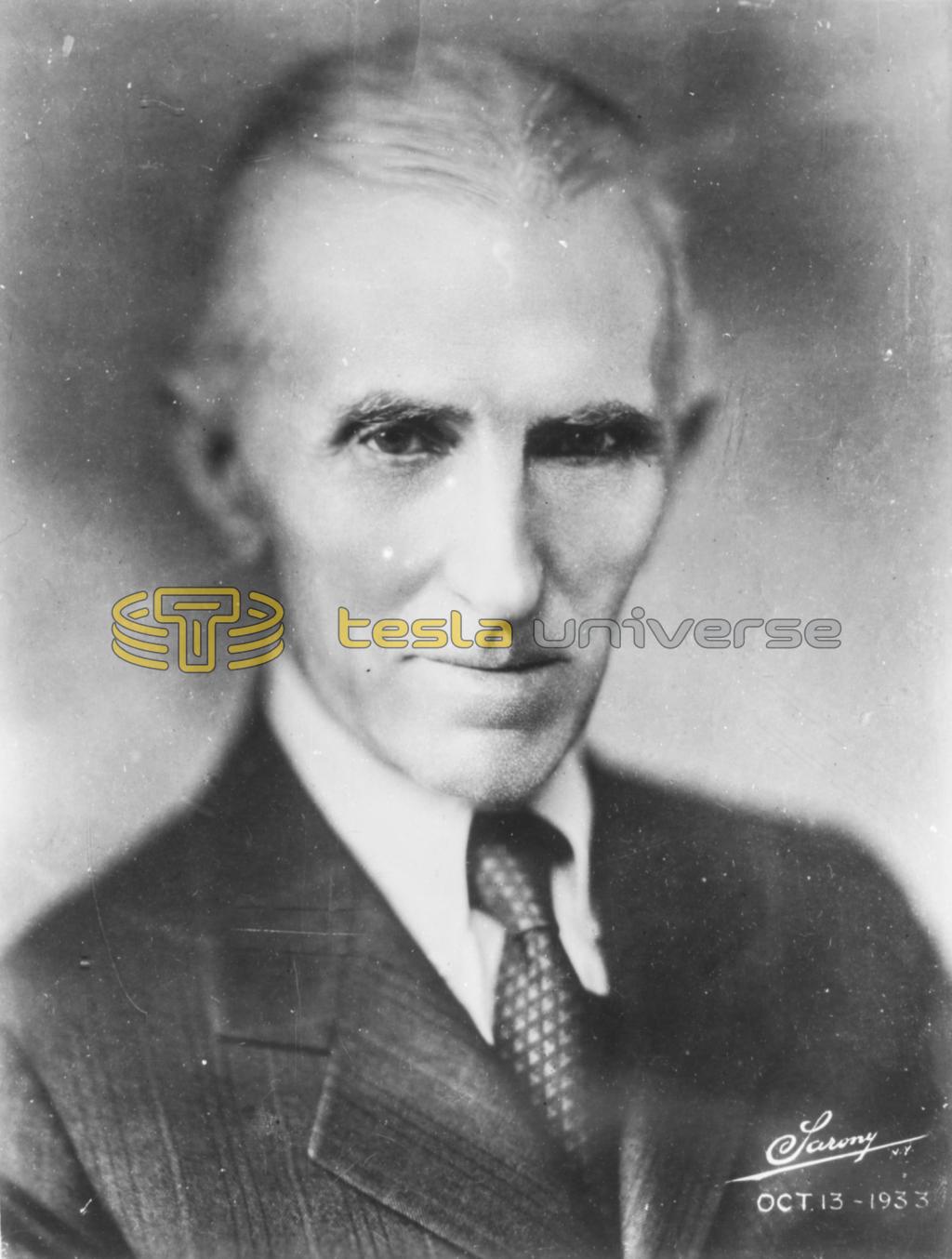 Without his forgotten genius a darkened world would crawl at a snail’s pace.

The average home would be without electricity today had not a tall, thin, young Yugoslavian landed in N.Y.C. seventy-five years ago.

Fantastically complex ignition systems would be needed for cars, and radio transmission would have been held back for years had not this impoverished youth, named Nicola (sic) Tesla, made his way from Ellis Island to the laboratory of Thomas Alva Edison with his head full of dreams.

No neon sign would flicker their invitations, no radio-controlled rockets protect our skies had Tesla not had the courage of youth, the strength of a madman and the arrogance of complete conviction.

Born in 1856, Nicola (sic) Tesla grew up to father radio, television, power transmission, the induction motor, as well as certain kinds of robots and radio-control.

Thomas Edison, as well as most of the best scientific minds of his day, was convinced that the future of man was tied up with direct electrical current. Tesla knew that alternating current was the key to tomorrow.

Had Edison won this battle of giants, every city street would need a power-house to transmit electricity, for it is uneconomical to transmit it long distances by direct current. There would be no T.V.A. and certainly no Dixon-Yates controversy, for the cheap distribution of electrical power was possible only with the alternating current which Tesla championed.

The fight between the two titans came to a head when Edison learned that A.C. was used in the electric chair at Sing Sing. Unfairly, he used this as “proof” that A.C. was deadly and demanded legislation to outlaw its use.

Tesla countered by calling in the press and giving a dramatic demonstration. He submitted his body to a million volts of electricity! In truth, this had as little
to do with the case as the electric chair, for the million volts were of extremely high frequency and could not harm him.

But the gesture paid off, and Tesla was able to get backing to build a dozen of his generators. They were used to light 100,000 bulbs at the Chicago World’s Fair. Shortly after the enemies of A.C. lost out completely when Tesla’s generators were used at Niagara Falls to send current coursing twenty-five miles to Buffalo.

Tesla was the storybook kind of genius. Shy and peculiar, brilliant and suspicious, he wove a protective coat of eccentricity around himself. With the million dollars he received for a number of patents, he created a legend at the famed Waldorf-Astoria where he lived a good part of his lonely life. His meals were epicurean delights cooked according to his own recipes. His dinners lasted precisely two hours, ending at ten o’clock. He then worked through the night.

Ideas poured from his suite at the Waldorf. All electrical motors up to Tesla’s time were dependent on brushes. They worked, but sparked badly, which robbed them of a great part of their efficiency. Tesla designed a motor minus brushes. The result was the beginning of modern electrical power.

He experimented with using electricity to light gas-filled tubes. The result was the neon lamp. Finding that short-wave currents healed specific parts of the human body, he showed the way toward a technique that is used today in diathermy for the relief of painful joint diseases.

As early as 1890 he had devised a method of radio tuning and was successful with wireless transmission. Looking into his scientific crystal ball, he foresaw radio as we know it today.

Despite these brain-children, he was angered at what he considered unfair treatment he had received at the hands of Edison and others. Brooding because the whole world did not recognize his genius, he became a recluse and an eccentric.

Fearful of germs, he took to dressing in white underwear only, which he destroyed after one day’s wearing. He kept a spray at hand, and messenger boys coming to his room were subjected to the indignity of being sprayed with antiseptic before he would accept their packages.

But even when he was most crochety and anti-social, he gave an annual birthday party for the press, at which he served the finest food and wine. The piècede-resistance of each of these evenings was a world-shattering report of what he was doing.

Year by year, the predictions as to the future of his work got more and more fantastic. But even when he talked about harnessing cosmic rays or sending electrical power through the air without wires, he was still able to get financial support for his schemes from people like John Jacob Astor. For on the infrequent occasions when he did give demonstrations, he was able to perform seeming miracles — like running a small motor fifteen miles away without any apparent wire connections.

At no time however, did he give any evidence to support his wildest claim — that he had a death-ray machine that would kill millions and immobilize motors at any distance!

He died on January 7th, 1943. In his effects were patents, ideas, schemes, which have never been thoroughly sifted. Nicola (sic) Tesla, who built a radio-controlled boat in 1898 that paved the way for today’s radio-controlled rockets, who saw and wrote about the dangers inherent in the release of the atom’s energy as early as 1900, had few mourners at his grave, and is barely spoken of today — just twelve years after his death.

But his inventions — his real memorial — live on, guiding the bright way to tomorrow. 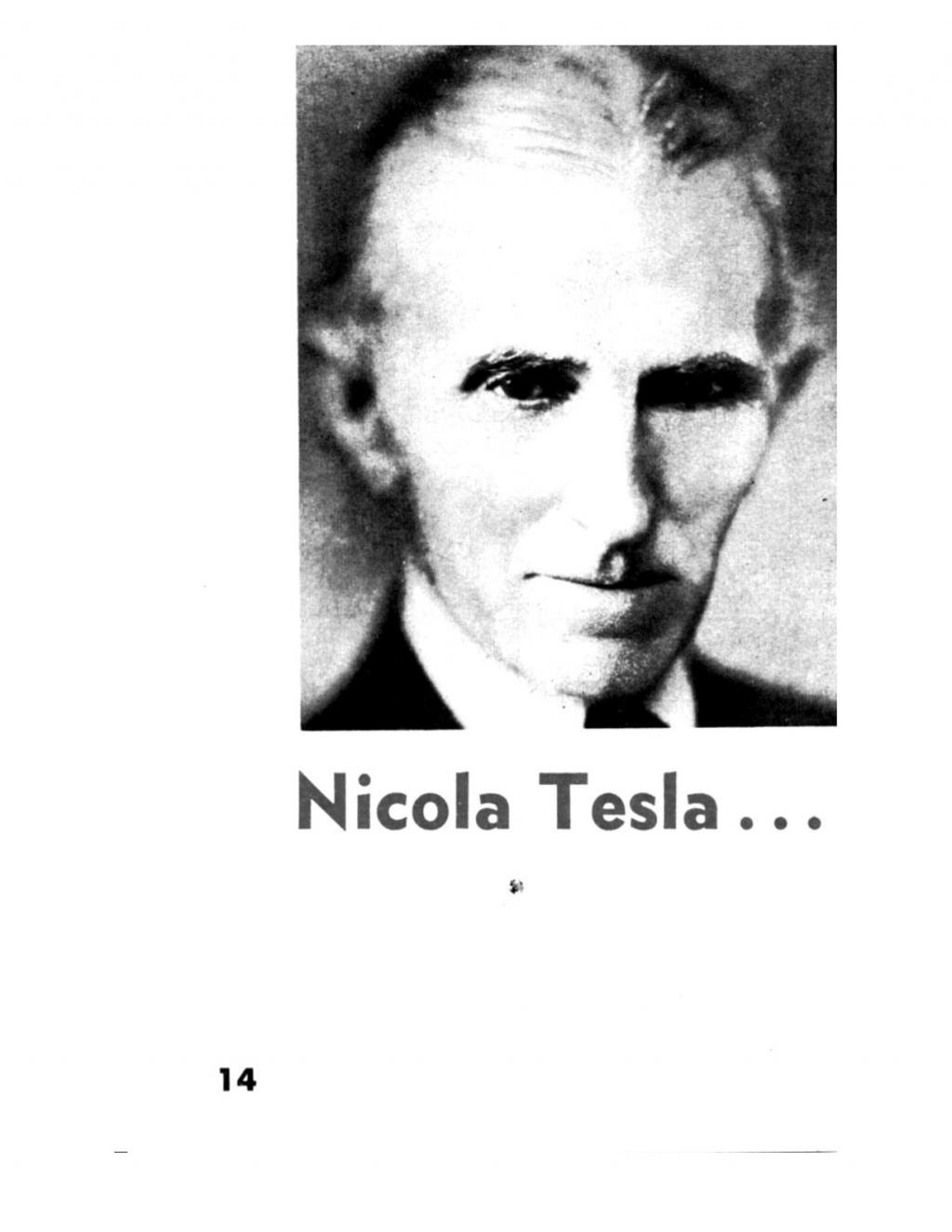