Nikola Tesla, the famous electrical wizard, who was awarded the seventh Edison medal on December 13, 1916, “for meritorious achievements in his early original work in polyphase and high-frequency electric currents,” received the medal at a presentation made at the annual meeting of the American Institute of Electrical Engineers, on May 18.

The Edison Medal was established upon the initiative of a group of friends and associates of Thomas A. Edison, for the purpose of recounting and celebrating the achievements of a quarter of a century in the art of electric lighting, with which the name of Edison is imperishably identified. It was decided that the most effective means of accomplishing this object would be by the establishment of a gold medal, which should, during the centuries to come, serve as an honorable incentive to scientists, engineers and artisans to maintain by their works a high standard of accomplishment.

The Edison Medal was, therefore, established and endowed with a trust fund, under an indenture dated February 11, 1904, whereby the American Institute of Electrical Engineers agreed to award the medal annually. It is awarded each year by a committee consisting of 24 members of the Institute to a resident of the United States of America and its dependencies, or of the Dominion of Canada, “for meritorious achievement in electrical science or electrical engineering or the electrical arts.”

“By an extraordinary coincidence, it is exactly twenty-nine years ago, to the very day and hour, that there stood before this Institute Nikola Tesla, and he read a description of his great discovery of the generation and utilization of polyphase alternating currents. He left nothing to be done for those who followed him. His paper contained the skeleton even of the mathematical theory.

“Three years later, in 1891, there was given the first great demonstration, by Swiss engineers, of the transmission of power at 30,000 volts from Lauffen to Frankfort by means of Mr. Tesla’s system. A few years later this was followed by the development of the Cataract Construction Company, under the presidency of our member, Edward D. Adams, and with the aid of the engineers of the Westinghouse Company. It is interesting to recall here to-night that in Lord Kelvin’s report to Mr. Adams, Lord Kelvin recommended the use of direct current for the development of power at Niagara Falls and for its transmission to Buffalo.

“The basis for the theory of the operating characteristics of Mr. Tesla’s rotating-field induction motor, so necessary to its practical development, was laid by the brilliant French savant Prof. André Blondel, and by Professor Kapp of Birmingham. It fell to my lot to complete their work and to co-ordinate — by means of the simple ‘circle diagram’ — the somewhat mysterious and complex experimental phenomena. As this was done twenty-one years ago, it is particularly pleasing to me, upon the coming of age of this now universally accepted theory — tried out by application to several million horse-power of machines operating in our great industries — to pay my tribute to the inventor of the motor and the system which have made possible the electric transmission of energy. His name marks an epoch in the advance of electrical science. From that work has sprung a revolution in the electrical art.” 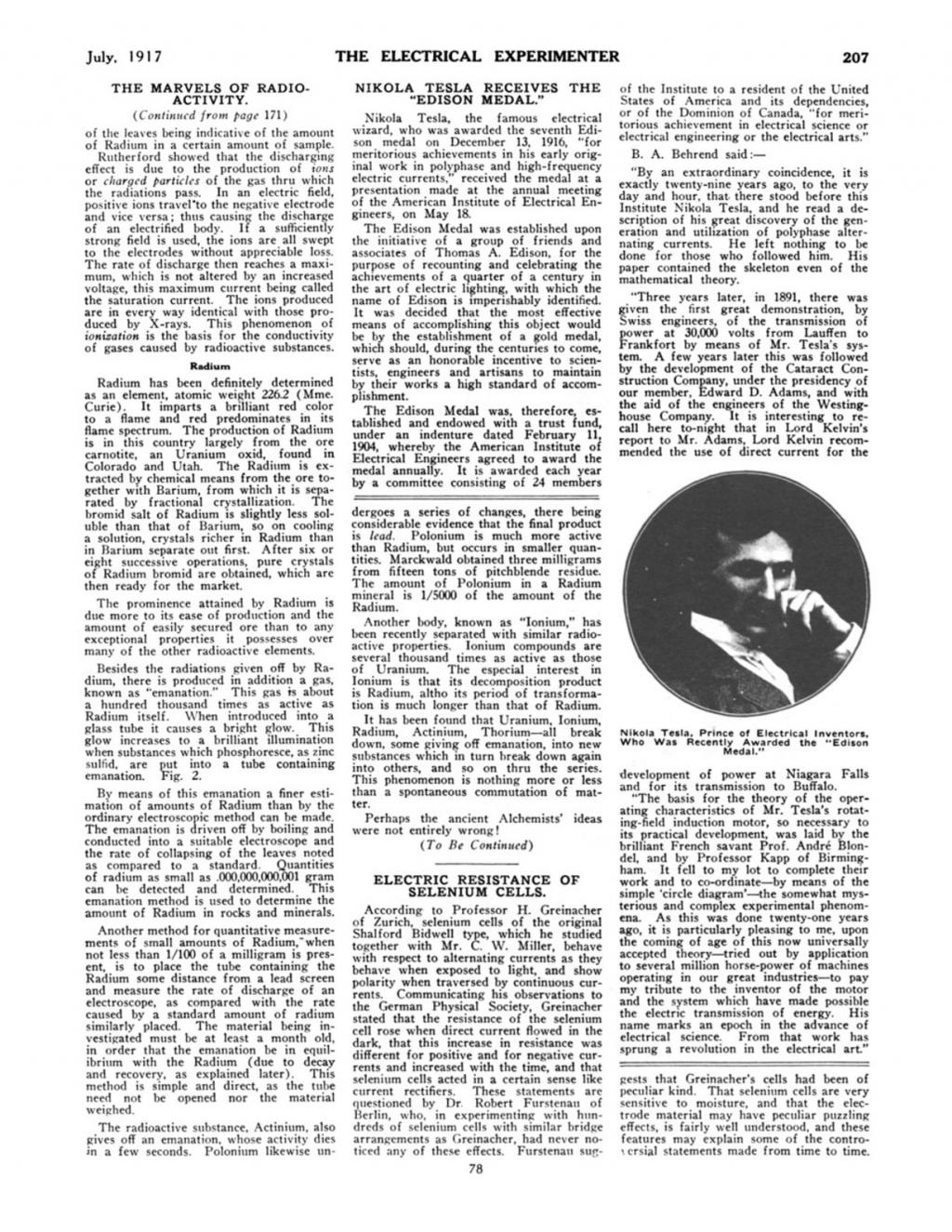