Suspecting that German spies were using the big wireless tower erected at Shoreham, L. I., about twenty years ago by Nikola Tesla, the Federal Government ordered the tower destroyed and it was recently demolished with dynamite. During the past month several strangers had been seen lurking about the place.

Tesla erected the tower, which was about 185 feet high, with a well about 100 feet deep, for use in experimenting with the transmission of electrical energy for power and lighting purposes by wireless. The equipment cost nearly $200,000. 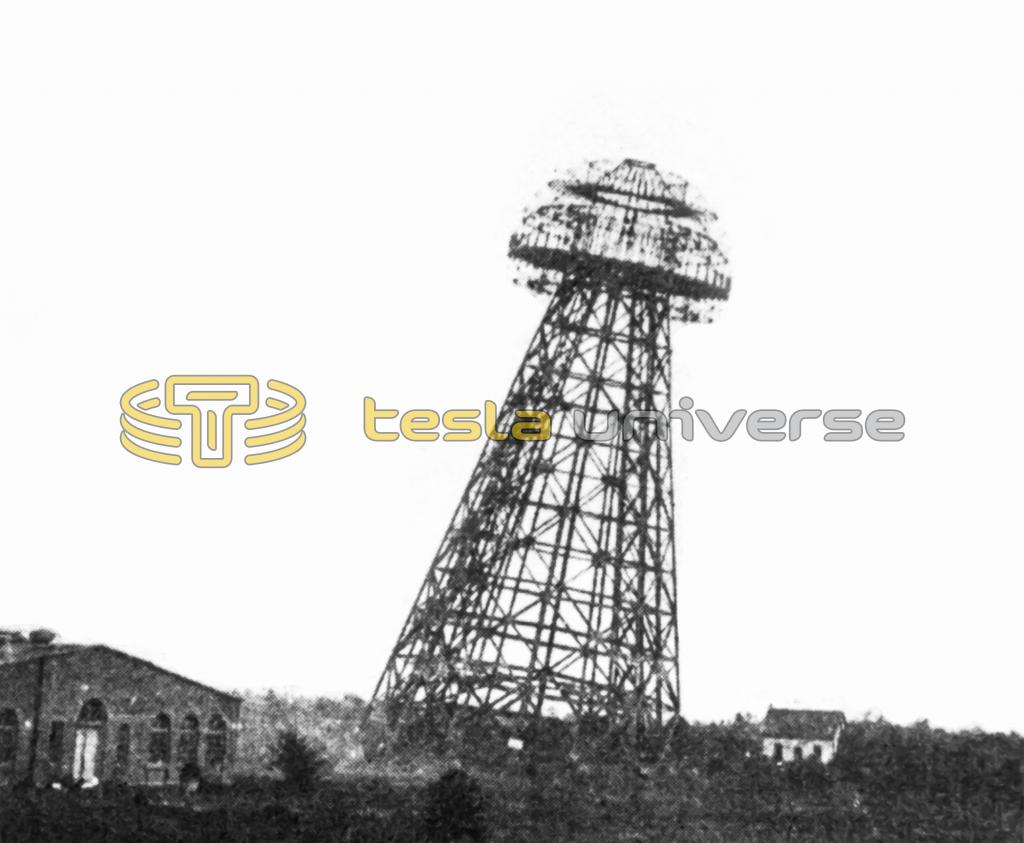 The late J. P. Morgan backed Nikola Tesla with the money to build this remarkable steel tower, that he might experiment in wireless even before people knew of Marconi. A complete description, revised by Dr. Tesla himself, of this unique and ultra-powerful radio plant was given in the March, 1916, issue of The Electrical Experimenter. Everyone interested in the study of high frequency currents should not fail to study that discourse as it contains the theory of how this master electrician proposed to charge this lofty antenna with thousands of kilowatts of high frequency electrical energy, then to radiate it thru the earth and run ships, factories and street cars with “wireless power.”

Most of our readers have, no doubt, read about the famous Tesla wireless tower, which structure involved the expenditure of a vast sum of money and engineering talent. From this lofty structure, which was designed some 20 years ago by Dr. Tesla and his associates, there was to be propagated an electric wave of such intensity that it could charge the earth to such a potential that the effect of the wave or charge could be felt in the utmost confines of the globe.

Further, it may be said that Tesla, all in all, does not believe in the modern Hertzian wave theory of wireless transmission at all. Several other engineers of note have also gone on record as stating their belief to be in accordance with Dr. Tesla’s. More wonderful still is the fact that this scientist promulgated his basic theory of earth current transmission a great many years ago in some of his patents and other publications. Briefly explained, the Tesla theory is that a wireless tower, such as that here illustrated and specially constructed to have a high capacity, acts as a huge electric condenser. This is charged by a suitable high frequency, high voltage apparatus and a current is discharged into the earth periodically and in the form of a high frequency alternating wave. The electric wave is then supposed to travel thru the earth along its surface shell and in turn to manifest its presence at any point where there might be erected a similar high capacity tower to that above described.

A simple analogy to this action is the following: Take a hollow spherical chamber filled with a liquid, such as water; and then, at two diametrically opposite points, let us place, respectively, a small piston pump, such as a bicycle pump, and an indicator, such as a pressure gage. Now, if we suck some of the water into the pump and force it back into the ball by pushing on the piston handle, this change in pressure will be indicated on the gage secured to the opposite side of the sphere. In this way the Tesla earth currents are supposed to act.

The patents of Dr. Tesla are basically quite different from those of Marconi and others in the wireless telegraphic field. In the nature of things this would be expected to be the case, as Tesla believes and has designed apparatus intended for the transmission of large amounts of electrical energy, while the energy received in the transmission of intelligence wirelessly amounts to but a few millionths of an ampere in most cases by the time the current so transmitted has been picked up a thousand miles away. In the Hertzian wave system, as it has been explained and believed in, the energy is transmitted with a very large loss to the receptor by electro-magnetic waves which pass out laterally from the transmitting wire into space. In Tesla’s system the energy radiated is not used, but the current is led to earth and to an elevated terminal, while the energy is transmitted by a process of conduction. That is, the earth receives a large number of powerful high frequency electric shocks every second, and these act the same as the pump piston in the analogy.

Quoting from one of Tesla’s early patents on this point: “It is to be noted that the phenomenon here involved in the transmission of electrical energy is one of true conduction and is not to be confounded with the phenomena of electrical radiation, which have heretofore been observed, and which, from the very nature and mode of propagation, would render practically impossible the transmission of any appreciable amount of energy to such distances as are of practical importance.” 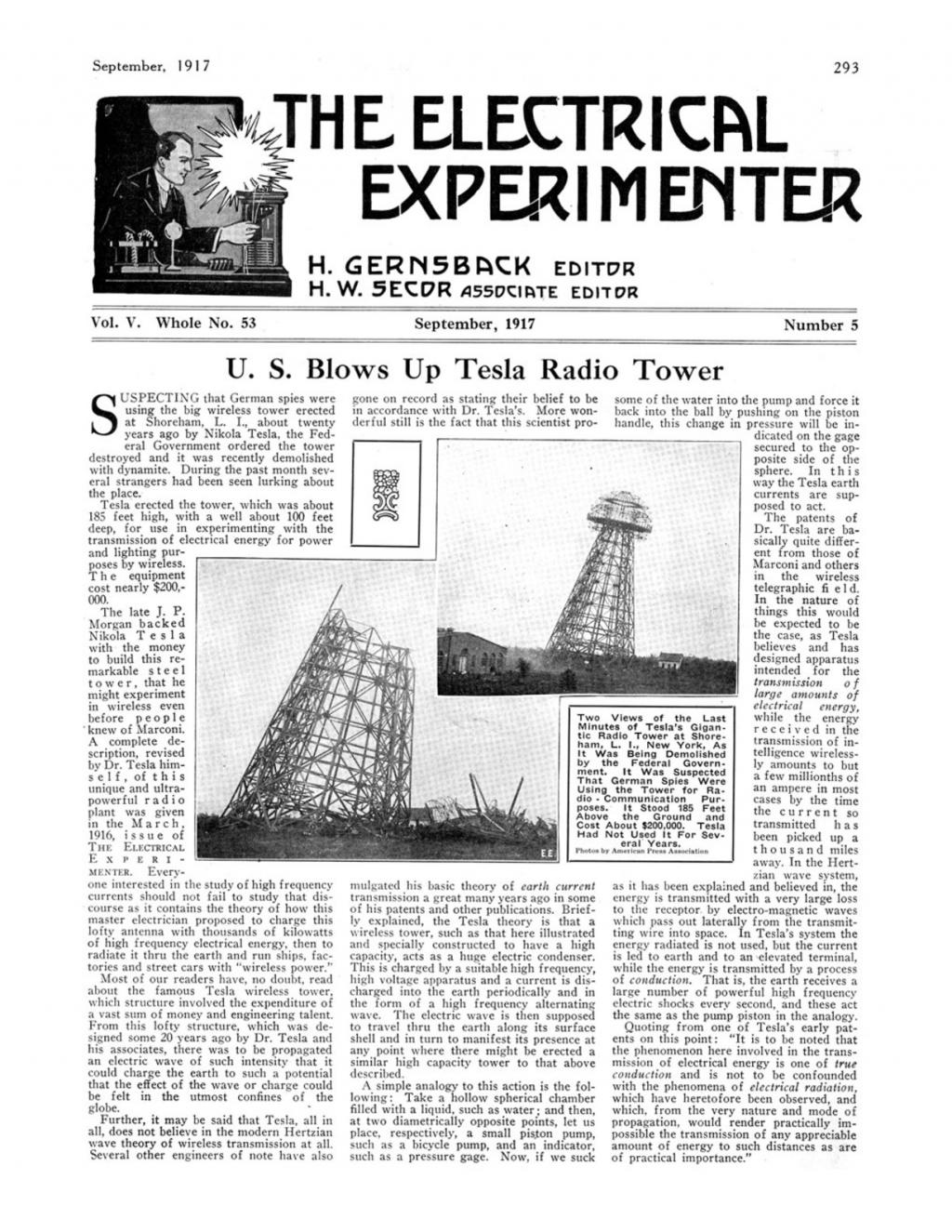