A Story of Youth Told by Age

By its author — Nikola Tesla 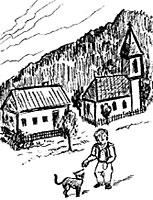 I am forwarding to you the "Calendar of Yugoslavia" of 1939 showing the house and community in which I had many joyful and sad experiences and odd adventures and in which also, by a coincidence bizarre, I was born. As you may see from the photograph on the sheet for June, the old-fashioned building is located at the foot of a wooded hill called Bogdanic. Adjoining it is a church and behind it a little further up a graveyard. Our nearest neighbors were two miles away and in the winter, when the snow was six or seven feet deep, our isolation was complete.

My mother was indefatigable and worked regularly from four o'clock in the morning till eleven in the evening. From four to breakfast time, 6 A.M., while others slumbered, I never closed my eyes but watched my mother with intense pleasure as she attended quickly - sometimes running - to her many self-imposed duties. She directed the servants to take care of all domestic animals, milked the cows, performed all sorts of labor unassisted, set the table, prepared breakfast for the whole household and only when it was ready to be served did the rest of the family get up. After breakfast everybody followed by mother's inspiring example. All did their work diligently, liked it and so achieved a measure of contentment. But I was the happiest of them, the fountain of my enjoyment being our magnificent Mačak - the finest of all cats in the world. I wish that I could give you an adequate idea of the depth of affection which existed between me and him. You would look vainly in the mythological and historical records for such a case. We simply lived one for the other. Wherever I went Mačak followed primarily owing to our mutual love and then again moved by the desire to protect me. When such a necessity presented itself he would rise to twice his normal height, buckle his back and with the tail as rigid as a metal bar and whiskers like steel wires he would give vent to his rage by explosive puffs Pfftt! Pfftt! It was a terrifying sight and whatever provoked him, human being or animal, beat a hasty retreat. 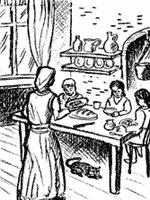 In the evening we went through our usual program. I would run from the house along the church and he would rush after me and grab me by the trousers. He tried hard to make me believe that he would bite, but the instant his needle sharp incisors penetrated the clothing the pressure ceased and their contact with my skin was as gentle and tender as that of a butterfly alighting on a petal. He liked best to roll on the grass with me. While we were doing this he bit and clawed and purred in rapturous pleasure. He fascinated me so completely that I too bit and clawed and purred. We just could not stop and rolled and rolled and rolled and rolled in a delerium of delight. We indulged in this enchanting sport day by day except on rainy weather. In respect to water Mačak was very fastidious. He would jump six feet to avoid wetting his paws. On such occasions we went into the house and, selecting a nice cosy place, abandoned ourselves for each other in affectionate embracement. Mačak was scrupulously clean, had no fleas or bugs whatever, shed no hair and showed none of the objectionable traits and habits of cats as I knew them later. He was touchingly delicate in signifying his wish to be let out at night and scratched the door gently for readmittance.

Now I must tell you of a strange and unforgettable experience which bore fruit in my later life. Our home is about eighteen hundred feet above sea level and in the winter we had dry weather as a rule, but sometimes it happened that a warm wind from the Adriatic would blow persistently for a long time, melting rapidly the snow, flooding the land and causing great loss of property and life. We would then witness the terrifying spectacle of a mighty seething river carrying wreckage and tearing down everything moveable in its way. Since I often visualize the events of my youth to find relief from great and dangerous mental strain and when I think of the scene the roar of the waters fills my ears and I see as vividly as then, their tumultuous flow and the mad dance of the wreckage. This leaves me, for a while, sad and depressed. But always agreeable are my recollections of winter with its dry cold and snow of immaculate white.

It happened that on the day of my experience we had a cold drier than ever observed before. People walking in the snow left a luminous trail behind them and a snowball thrown against an obstacle gave a flare of light like a loaf of sugar hit with a knife. It was dusk of the evening and I felt impelled to stroke Mačak's back. Mačak's back was a sheet of light and my hand produced a shower of sparks loud enough to be heard all over the place. My father was a very learned man, he had an answer for every question. But this phenomenon was new even to him. Well, he finally remarked, this is nothing but electricity, the same thing you see on the trees in a storm. My mother seemed alarmed. Stop playing with the cat, she said, he might start a fire. I was thinking abstractedly. Is nature a gigantic cat? If so, who strokes its back? It can only be God, I concluded. You may know that Pascal was an extraordinarily precocious child who attracted attention before he reached the age of six years. But here I was, only three years old, and already philosophising!

I can not exaggerate the effect of this marvellous sight on my childish imagination. Day after day I asked myself what is electricity and found no answer. Eighty years have gone by since and I still ask the same question, unable to answer it. Some pseudo scientist of whom there are only too many may tell you that he can, but do not believe him. If any of them knew what it is I would also know and the chances are better than any of them for my laboratory and practical experiences are more extensive and my life covers three generations of scientific research.

My childhood in Mačak's delightful company and undying friendship would have passed blissfully if I did not have a powerful enemy, relentless and irreconcilable. This was our gander, a monstrous ugly brute, with a neck of an ostrich, mouth of a crocodile and a pair of cunning eyes radiating intelligence and understanding like the human. I aroused his ire by throwing pebbles at him, a most foolish and reckless act which I bitterly regretted afterwards. I liked to feed our pigeons, chickens, and other fowl, take one or the other under my arm and hug and pet it. But the brute would not let me. The moment I entered the poultry yard he would attack me and as I fled grab me by the seat of my trousers and shake me viciously. When I finally managed to free myself and run away he would flap his huge wings in glee and raise an unholy chatter in which all the geese joined. When I grew up two aunts of mine used to tell me how I answered certain questions they asked. One was Aunt Veva who had two protruding teeth like the tusks of an elephant. She loved me passionately and buried them deep in my cheek in kissing me. I cried out from pain but she thought it was from pleasure and dug them in still deeper. Nevertheless I preferred her to the other aunt whose name has slipped from my memory and she used to glue her lips to mine and suck and suck until by frantic efforts I managed to free myself gasping for breath. These two aunts amused themselves by asking me all sorts of questions of which I remember a few. Are you afraid of Luka Bogic? No! Luka always carried a gun and threatened to shoot. He robbed other boys of pennies and gave them to me. Are you afraid of the cow? No !' That was one of our cows and very nice until one day I slid from a fence on her back for a ride when she made off with me bellowing and threw me. I was none the worse for the experience. Are you afraid of the bad wolf? No! No! This was the wolf I met in the woods near the church. He was looking at me fixedly and approaching slowly. I shouted as usual when a wolf is around and he trotted away slowly. My present visualization of this scene is astonishingly sharp and clear. After a number of such questions one of the aunts asked me; Are you afraid of the gander? Yes! Yes! I replied emphatically, I am afraid of the gander! I had good reason to be. One summer day my mother had given me a rather cold bath and put me out for a sun warming in Adam's attire. When she stepped in the house the gander espied me and charged. The brute knew where it would hurt most and seized me by the nape almost pulling out the remnant of my umbilical cord. My mother, who came in time to prevent further injury, said to me: "You must know that you can not make peace with a gander or a cock whom you have taunted. They will fight you as long as they live." But now and then I would play in the poultry yard to my heart's content for on certain days our geese, led by the gander, rose high in the air and flew down to the meadow and brook where they sported like swans in the water and probably found some food. I would then feed and pet the pigeons, the poultry and our grand resplendant cock who liked me. In the evening the gander brought back his flock who made a few turns above the house and then came down with a deafening noise. The sight of the flying geese was a joy and inspiration to see. 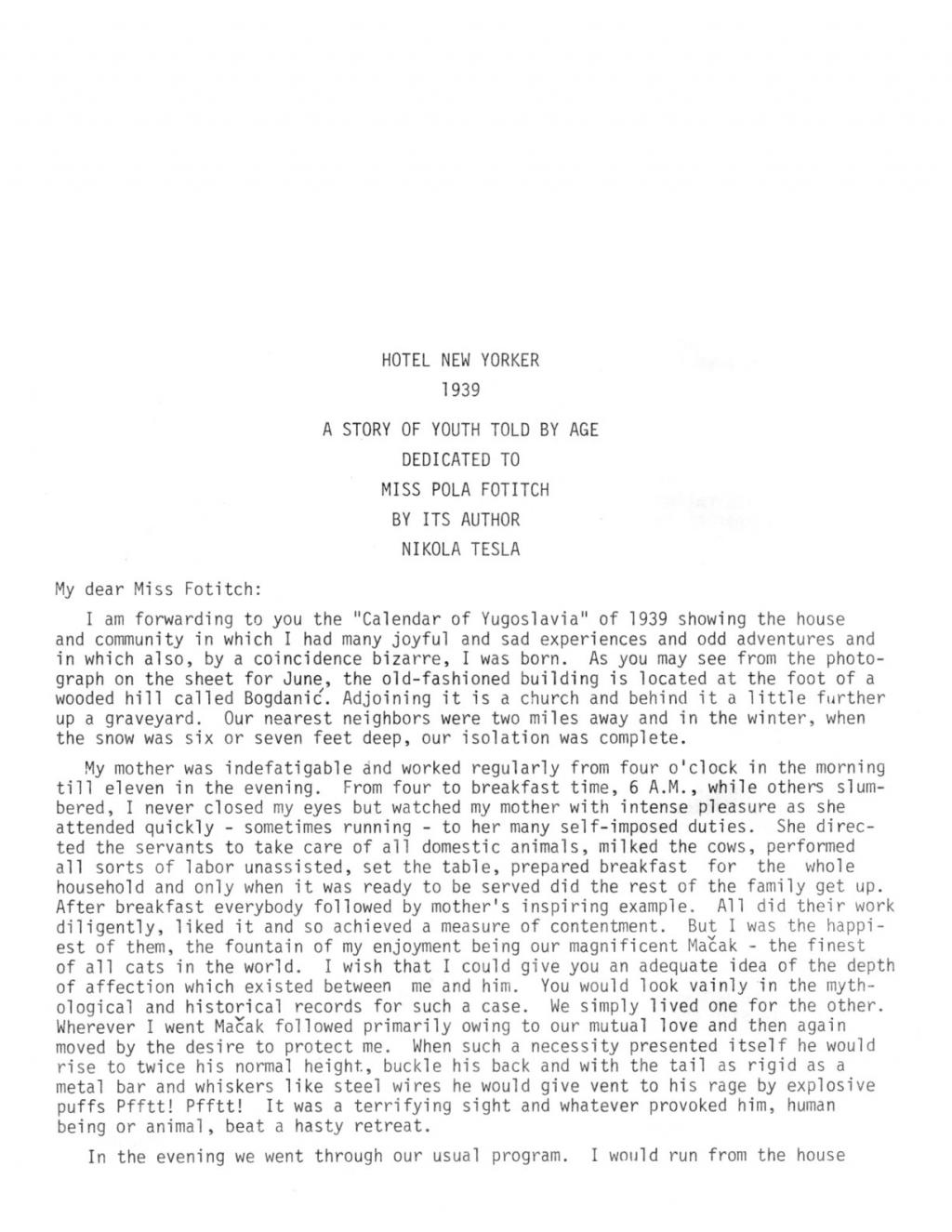