We have recently been informed by the public press in flamboyant rhetoric that Nikola Tesla has devised a boat which is destined to revolutionize the art of warfare. Apart from its value as an excellent subject for sensational newspaper articles, Mr. Tesla’s invention presents certain aspects which are, perhaps, not uninteresting from a scientific point of view. We have therefore produced herewith diagrams of this vessel, from which it will be seen that, ingenious as the mechanism employed may be, no very decided advantage is presented over the dirigible torpedo.

Of the annexed diagrams, Fig. 1 is a plan view of Tesla’s boat, presenting a general view of the apparatus employed, Fig. 2 is a sectional view of the Tesla system, and Fig. 3 is a longitudinal section of the boat showing the mechanism in side elevation.

Tesla claims that, in a broad sense, his invention differs from all other systems of controlling boats, in so far as he uses no intermediate wires, cables, or other form of electrical or mechanical connection with the object, save the natural media in space.

The boat itself is provided with a propelling mechanism comprising a screw propeller, C, secured to the shaft of an electric motor, D, driven by the storage battery, E. The vessel is steered by a rudder controlled by a steering motor, F. The apparatus by means of which the operation of both the propelling and steering is controlled, involved the use of a receiving circuit adjusted and rendered sensitive to the influence of the electrical waves or impulses emanating from a distant source, the adjustment being such that the oscillations of the circuit and of the source of disturbance shall occur in electro-magnetic synchronism.

The receiving circuit consists of a terminal, E’, a conductor, an electric controller similar to that used in “wireless” telegraphy, and means by which the current may be led to the ground through the medium of the vessel’s keel. The circuit in question forms part of a local circuit, in which are included a relay magnet, a, and a battery, a’, the electromotive force of which is so determined that although the dielectric layers in the electric controller are subjected to great tension, yet normally they withstand the strain, and no appreciable current flows through the circuit. When, however, an electric impulse reaches the dielectric layers, they are broken down, thus suddenly diminishing the resistance and permitting a current to pass through the relay magnet. The particular controller employed need not be described here, but is shown in side elevation over the motor, D, in Fig. 3. The relay magnet, a, is used to control the operation of the propelling engine and of the steering apparatus.

Placed in the circuit of the electric controller is a commutator, by means of which the direction of the current may be changed in order to influence one of the two relay-magnets, K’ or K”, placed in the circuit of the battery, k”. While one relay, K’, for example, is in operation, its armature closes a circuit passing through the motor, F, in order to cause the rudder to be swung to port. The other relay, K”, causes the motor to throw the rudder to starboard. The steering apparatus, as shown in Figs. 1 and 3, consists, in addition to the steering motor, F, of a toothed wheel, G, engaged by a worm on the shaft of the motor, F. The wheel, G, controls the rudder, F’, through the medium of a sleeve, b, a toothed wheel, H”, and rod, G’. A fixed vertical rod, H, is mounted within the sleeve, b, and carries an insulating disk, L, to the under surface of which brushes are secured. The sleeve, b, surrounding the rod, H, and turned by the motor, F, carries a disk, L’, upon the upper face of which are secured two concentric circles of conducting contact plates interspersed with insulated plates. In certain positions of the disk, L’, the brushes are in electric connection with the contact plates. Conductors connect the contact plates with the terminals of the propelling motor, D; and the poles of the battery, E, are so connected with two of the brushes that when the rudder is in straight position or turned to either side, the current is conveyed through these two brushes and through the contact plates to the propelling motor, D. The steering motor is similarly driven by current taken from the battery, E, and conducted to two brushes of the plate. L. The motor, F, according to Mr. Tesla, may always be caused to rotate in one direction whatever may be the position of the rudder; and may he caused to rotate in either direction whenever the rudder is inclined less than 45° from the center position.

In addition to this mechanism the vessel carries a small auxiliary motor, m (Fig. 1), connected in series with the armature of the steering motor. By means of this auxiliary motor, lights on the ends of the standards, q, may be flashed in order to indicate the course of the vessel to the operator at night.

In Fig. 2, illustrating diagrammatically the operation of the system, S indicates any source of electrical wave energy controlled by a switch located in a box, T. The handle of the switch is movable in one direction only, and stops on four points, t, t’, u, u’, so that as the handle passes from stop to stop, oscillations are produced during a very short interval. Tesla places the handle of the switch so that when arrested on the points, t t’, the boat is deflected respectively to the left or to the right from its course. The normal positions of the handle are u u’. The impulses sent forth from S are, according to Tesla, received by the terminal, E’, transmitted to the commutator, j, to influence one of the relays, K’ K”, and to cause the motor, F, to act on the brushes to turn the rudder in whichever direction it may please the operator. The motion of the rudder causes the second set of brushes to act on the propelling motor to drive the vessel.

Whether, as Mr. Tesla claims, his apparatus, by reason of its certain and unlimited destructiveness, will tend to bring about and maintain permanent peace, is a question discussed elsewhere. 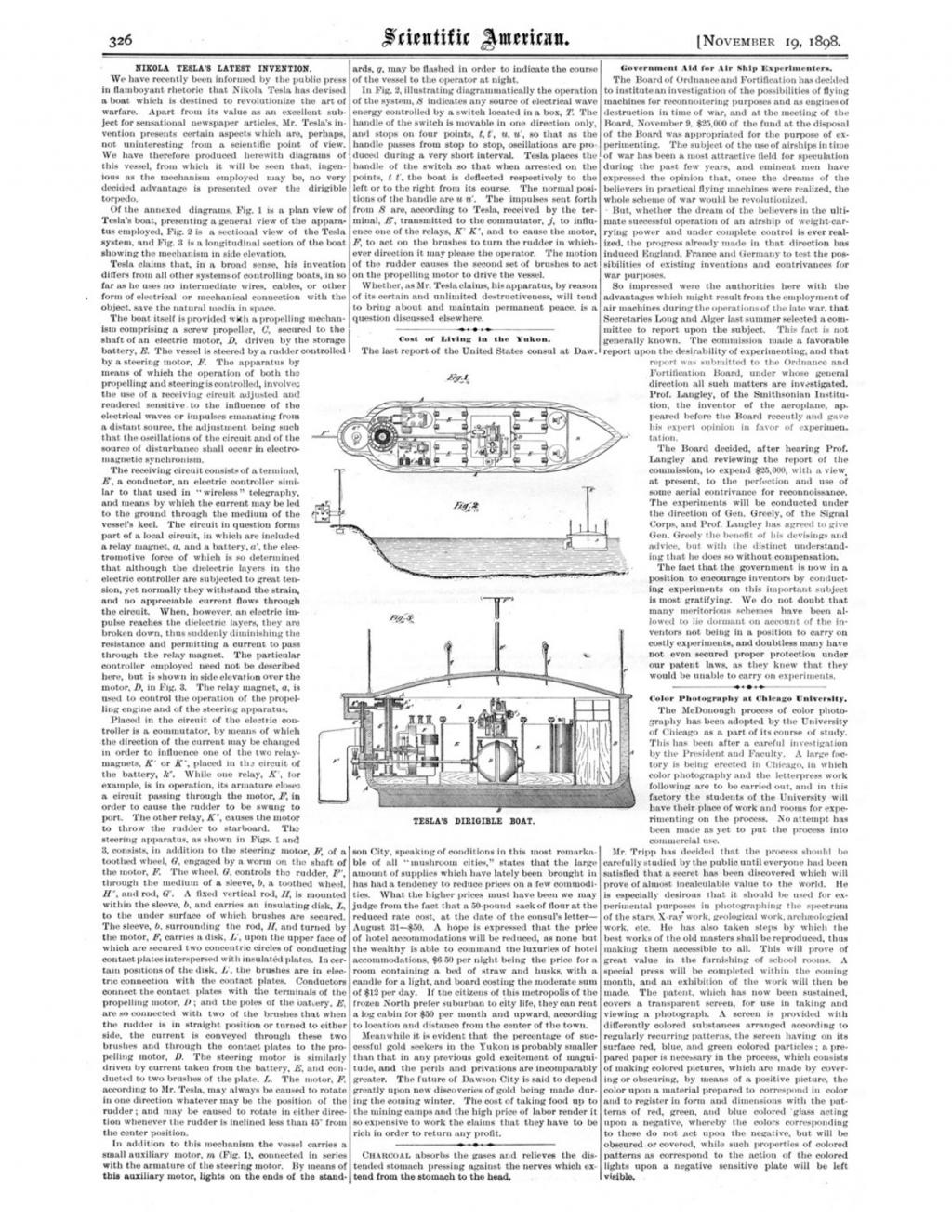